12 Rules for Decoying Ducks and Geese 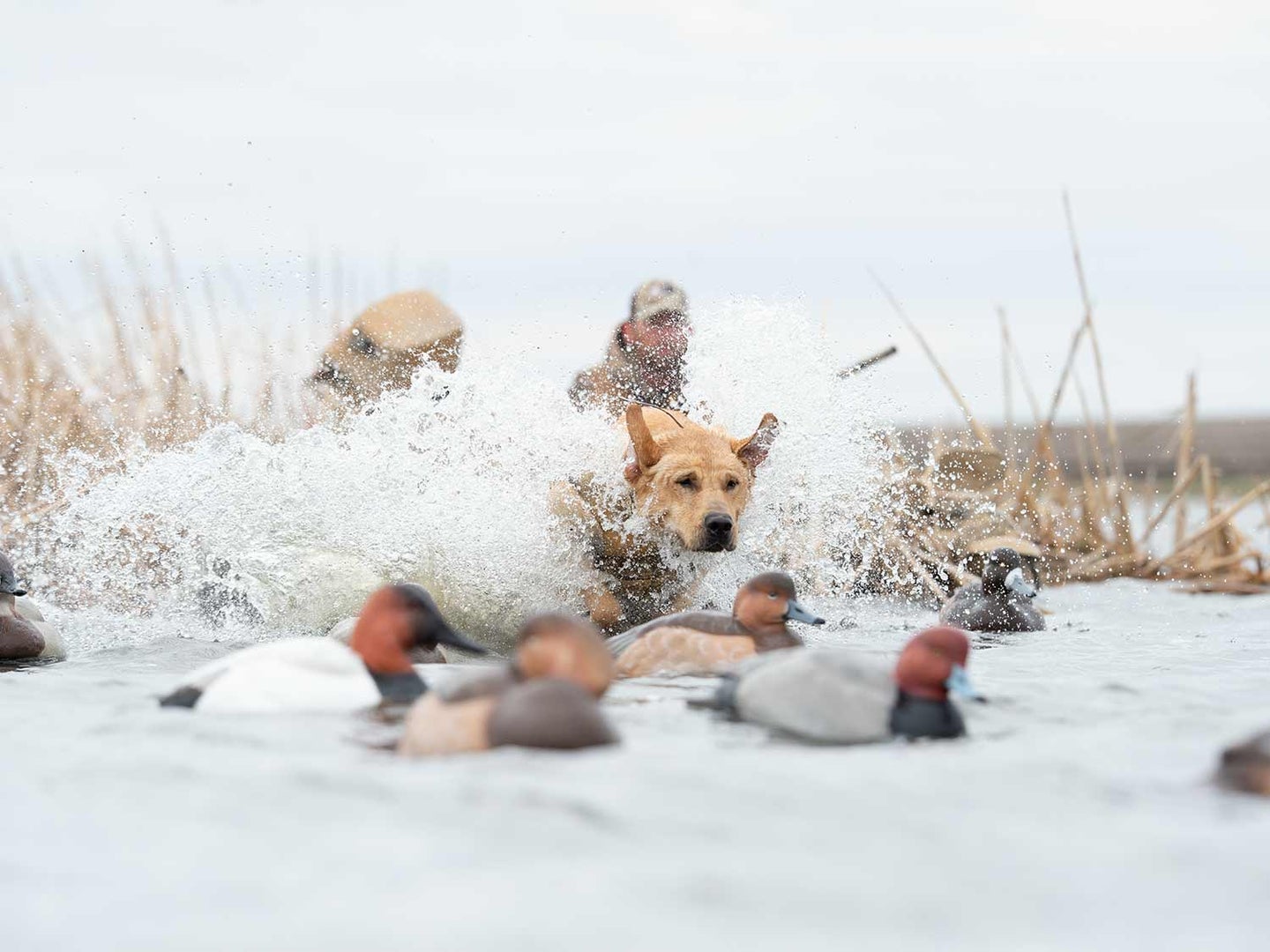 Know the precise location of where ducks and geese want to be is key to setting up on the X. Plano Synergy
SHARE

Ask Fred Zink for tips on decoying waterfowl and you’d better be ready because he can unleash a torrent of information that he’s gleaned from his experiences as a champion caller, decoy and hunting blind designer, and founder of Zink Calls. I asked, and here’s what came through the floodgates.

The most important aspect of decoying ducks and geese is location, says Zink. But you’re going to have to be more specific than that if you want to consistently take waterfowl.

“Knowing the exact spot is important, but just part of the whole puzzle,” he says. “There is always an exact location where ducks and geese want to be because of available food or cover—whether it’s ducks in shallow water or geese in a field. There are areas in that field that are fed out and there are areas in that field where there’s still food. Those birds, whether they be ducks or geese, want to be right there. That is where you set your decoys.”

If you hunt where migrating birds, unfamiliar with local feeding spots, are coming through or if you’re in a permanent blind and unable to move to the X, you might need to consider a Plan B.

“It helps to understand what ducks and geese look for,” says Zink. “New birds want other birds on the water to flock with, especially during migration time. Use your decoys to show those new birds where they should land. Open-water points are very productive.”

It’s not that ducks like to sit on a point, but they will land on a point, then swim back into bays. When you’re hunting a point, your decoys are very visible and more likely to attract passing birds than decoys off a straight-line bank. Beware of setting decoys along a flat bank, where reflection of the terrain on the water can hide them.

Understanding what hungry birds are looking for can also help you zero in on the X.

“The most successful hunters I know, work the hardest at scouting,” says Zink.

What’s true about birds knowing where grain is in fields is true about natural food sources in marshes as well. Vegetation like Pennsylvania smartweed, wild barnyard grass, and nutsedge draw ducks. But you can learn specifics about local vegetation by watching where ducks are landing. Zink often hunts areas he’s never seen previously so he has to learn about the birds and where they want to be. Rather than rushing out and setting up in a likely spot, he’ll watch for several hours until he determines a pattern. That’s when he sets up on the X.

“Where most people go wrong, and it’s not something that’s talked about or focused on, is the art of camouflage and hiding,” says Zink. “But it’s also where 90 percent of hunts fail.”

A lot of hunters don’t take advantage of natural vegetation. Instead of using it as cover, they consider it an obstacle, anchoring their boat on the outside of vegetation or a bunch of trees, rather than back in the cover. Same with blinds. They’ll place them conspicuously in front of vegetation, rather than blending them in.

“The guys I know who really shoot them, get back in there deep enough so that it’s a little hard to shoot the ducks because there’s so much between you and the decoys,” he adds. “Same way with a cattail marsh—get four or five yards deep in the cattails. Ram your boat up in there so that when you have a wall of vegetation so you’re not relying just on the camouflage on your boat.”

Complete camouflage, including overhead cover, is a must. Zink says that he’s pulled into a local hunting area with 15 hunting rigs in the parking lot and “I can stand on the top of my boat on the boat ramp and look out over the marsh and I can typically find all 15 of them.” Zink takes the time to camouflage, paying attention to every detail, grassing the chicken-wire frame of his boat blind with natural vegetation. Prairie cordgrass, which is wispy, durable “and won’t poke you in the eye,” is a favorite. “You can blend it in and I can go right in there and the ducks have absolutely no idea where I am,” he says. “When you’re hunting a public marsh that’s maybe 600 acres and has five to 30 boats hunting it every day of duck season, you have to be able to hide.”

6. Use an A-Frame to Field Hunt

For field hunting, Zink has poured a lifetime of hunting knowledge into the Avian X A-Frame Blind, developed after drone footage of their field spreads showed ground blinds sticking out like a sore thumb.

“I was amazed at how much ground blinds stick out from above,” says Zink. “They look like picnic tables in a decoy spread. How we shoot anything out of them, I have no idea, especially from the shadow side of the blind.”

A-Frame blinds work because they provide overhead cover and aren’t boxy and don’t cast such pronounced shadows and when they are grassed and blended in, a line of them, even five or six, look like a fencerow. Now, blinds like the A-Frame, inspired by blinds used in the Northeast for years, are making fencerows productive again.

7. Try a Layout Blind on the Edge

“I’ve been using them in the Midwest from the very beginning,” says Zink, “and by the early to mid-2000s, geese especially were almost impossible to kill out of them because they just knew what they were.”

So, Zink started setting his ground blind on field edges by fence rows or vegetation patches and he started shooting ducks and geese again because geese were accustomed to hunters being in the middle of fields, not along fencerows.

Read Next: How to Hit More Ducks

“They can see those decoys for miles,” says Zink, “but if you set up where the sun is in their face, they can’t see you and they’ll fly right by.”

Conversely, if scouting has put you on the X, you want the sun in the face of incoming birds so they can’t see your well-camouflaged blind. It works especially well on water sets, with glare coming off the surface blinding them. “With the reflection off the water in their eyes they have no idea you’re sitting out there in the middle of the bay in a layout boat.”

Knowing how well-educated your birds are is important.

“Take Canada geese, for example,” says Zink. “The more educated they are, the smaller spread I use. If they’re really smart, I might use three, five, six decoys, because they are already coming there. If you set up a hundred decoys, they’re probably not going to come to you very well, especially the first couple of flocks of educated resident geese because they are used to be being the first in the field each day and are wary of decoy-occupied fields. Later flocks are used to seeing more geese in the field, the ones that landed and are feeding ahead of them, and may be more susceptible.”

“When there’s no wind, I use a much smaller decoy spread because it’s more natural for a dozen, 16 or 18 geese to be somewhat motionless than it is have two or three hundred and all of them motionless,” says Zink. “Ducks and geese on the ground move a tremendous amount—ducks will really move, running from kernel to kernel of corn. Geese are always walking, moving, flapping wings, making a lot of motion. So when you have no wind and a couple hundred decoys out you’re not going to get any motion, and you’d better hope you have dumb geese. On the flip side, any good field decoy should have some type of wind-driven motion system on it.”

The greatest benefit for waterfowl hunters in recent years is the evolution of truly lifelike decoy postures. His Backwater series mallards have heads and beaks at or below water level.

“If you watch ducks in a natural backwater, I guarantee you that 85 to 90 percent of them will have their heads down feeding”

Keep decoys in good working condition by cleaning and preserving them at the end of the year. To protect them, use slotted decoy bags with a decoy in each slot, the anchor in a pocket to keep mud off decoys. Zink doesn’t use soap, but if you do, use non-UV, non-brightening soap. Just warm water and stiff brush works fine. When dry, he gives them a light coat of matte clear spray-on finish.

“I can take a decoy that’s two, three, four years old and used quite a bit and hit it with that spray and the color just pops back,” he says. “Just mist it, like when your wife puts hairspray on.”

Because he wants deeper in color—the black and greens on drake mallard decoys—get a heavier coat in order to make them pop.