A good all-purpose fly rod should cast a heavy nymphing rig or dry fly, and these Greys rods definitely do both 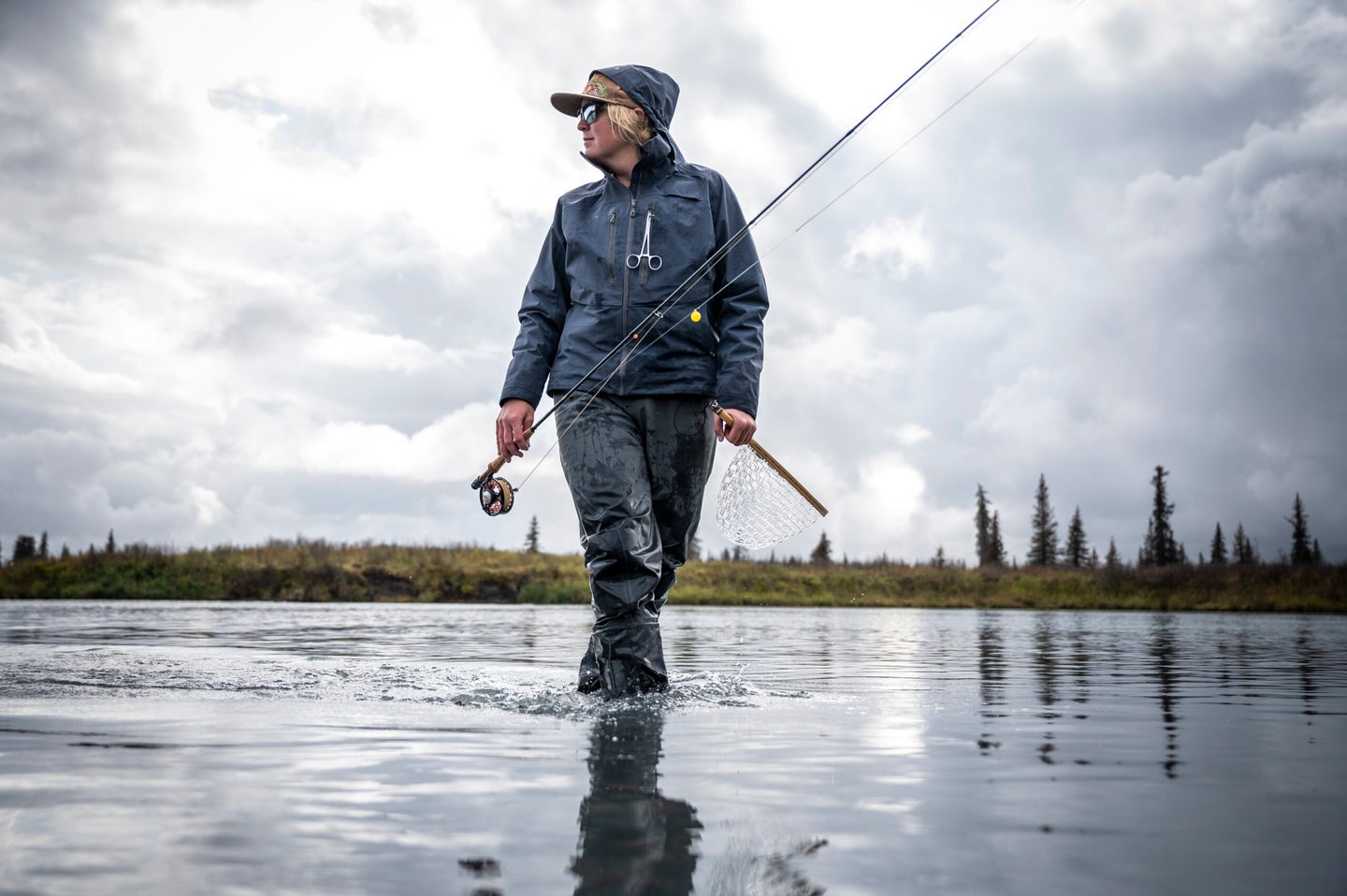 Fly fishing, it seems, is facing a kind of renaissance. Anglers are flooding rivers, lakes, reservoirs, and ponds in record numbers, buying fishing licenses and whatever fly fishing gear—like Greys fly rods and reels—they can get their hands on.

Many are wealthy, ready to drop thousands on high-end rods and reels recommended in local fly shops. Many are not.

“Value proposition is essential,” said Jim Murphy, director of fly fishing for Pure Fishing. “Student loans, unemployment, COVID—it necessitates people being more deliberate when they buy tackle.” Those are partly who the folks at Greys, a U.K. fly fishing brand owned by Pure Fishing, are targeting with their high-performance rods at mid-range prices. But don’t think these rods are necessarily for newbies. They’re not off-the-shelf rod-and-reel combos you picked up at the local sporting goods store when you were 16 and finally saved enough money to learn to fly fish.

Greys is aiming to have a corner of the elusive niche that is professional rods at novice prices.

Three devoted fishing buddies and I carted multiple Greys fly rods and reels on a week-long salmon, trout, and grayling fishing trip down a river last fall in Alaska. We broke two, but also caught more fish than we even tried to count. Since then, my husband and I have used the GR60 Streamflex 7wt and GR80 4wt across Wyoming streams, rivers, and lakes with everything from nymphs and dry flies to heavy streamers with sink tip line.

In our lineup of nearly a dozen rods ranging from top-of-the-line Sage to mid-level St. Croix, the Greys are more often making it into the truck and along for the ride. For affordable, all-around fly fishing rods and reels with lifetime warranties, they’re tough to beat.

Bonus: Reel spools pop out, allowing up to four different lines on the same reel

What to Look for in a Fly Rod

Ask a dozen fly fishers what they consider the best fly rod and expect a dozen answers. Filter through the responses, and a few rise to the top.

Weight has often mattered, though most new rods are so light that it just isn’t as big a deal anymore.

Next up is how easy a rod is to load. Basically, you want the weight of your line to bend the rod enough to shoot it forward, but not so much it flops back and forth like a wet noodle. Plenty of rods err on the side of a little too stiff. Can you still catch fish with a rod that doesn’t bend much? Sure. Is it as much fun? Nope.

“That 7wt had plenty of power to cast big streamers with a sink tip,” said Josh Peterson, my husband who has been guiding salmon and trout fishing in Alaska since 2008 and fishing Wyoming rivers 12 months of the year for far longer. “If the rod doesn’t have enough backbone to throw a heavy-weighted streamer on a sink tip, it’s not worth buying.”

Cost is a big deal, especially among those more budget-strapped. This is an area where the Greys fly rods and reels start to shine. Their top GR80 Streamflex Plus Fly Rods still come in under $400. A mid-range rod is $200. Both are great.

And saving the most important factor for last: Warranty. Greys fly rods have lifetime, no-questions-asked warranties after paying for shipping and handling (about $40). Anyone who fly fishes for any period of time knows rods are going to break. Tips snap on rafts and boats. Eyelets bust off. Sections break when landing a big fish just a little wrong. It happens. If you’re spending $150 on a rod, it sucks when it breaks but life goes on. Spend $300, $400 or certainly $1,000 on a rod, you want to know you can use it and not plan to buy another anytime soon.

If you haven’t heard of Greys, or vaguely remember it from years before, it’s understandable. The company is British — founded in 1968 by Malcolm Grey — as a spinoff from a company called House of Hardy, which has been making exceptionally high-end fly rods in the U.K. since the 1800s.

“Their goal was to have a range of technically advanced tackle at good prices,” said Murphy. Less aspirational and more get-it-done. Like many companies, it went through a variety of ownerships and partnerships. Greys broke into the U.S. market in the mid-2000s, when what is called Czech Nymphing started to become even more popular. Years and more turnover later and the company is back and making a splash, according to Murphy.

“We were missing out on that explorer adventurer angler, and the young, technically proficient that can’t afford the Hardy,” he said. And they’re hitting that target hard. A sneak peek of Greys’ newest reels to release this fall include the Tital Reel, won them Best Fly Fishing Reel out of the New Product Showcase at ICAST 2021.

Testing the Greys 7wt and 4wt Rods and Reels

We took a handful of rods on our Alaska trip, from 8wts for silver salmon, down to a 4wts for grayling. We tried them all, and caught fish on them all. But for the sake of this review, we can dive into the 7wt and 4wt, which I also have been using over the past year on Lower 48 rivers.

Both the 7wt and the 4wt do, in fact, excel at nymphing. Czech Nymphing, or Euro nymphing, is (basically) when one or more nymphs are tied to the end of a line along with some weight and the angler keeps the line short and tight. A rod needs to be stiff enough to respond quickly to nudges and strikes.

We used a variety of flies, along with split shot in Alaska, on both the 7wt and 4wt and neither disappointed. The 7wt also performed well with heavy salmon streamers and a sink tip line. That much weight requires fast action from a rod.

The best part, I realized back home after months fishing local tailwaters for 24-inch brown trout and in mountain streams on rising brook trout, was that both rods can handle more than one task.

“With the 4wt, you want something that will cast dry flies well and also do a good job roll casting a nymphing rig with some weight,” Josh said. “We have a 3wt rod that is really fun to use with dry flies, but if you want to roll cast a woolly bugger or flies with split shot, you’ll be cussing. Greys did a good job at both.”

What it lost in a margin of flexibility and fun with a caddis it made up for by being able to switch back and forth. The greys fly reels performed fine, with smooth drag and no issues with tangled lines. The interchangeable spools on the QRS Reels are particularly handy, especially moving back and forth from floating line to sink tip.

What the Greys GR60 7wt and GR80 Streamflex 4wt Do Best

Both the higher-end GR80 Streamflex and mid-range GR60 performed well under any of the circumstances we threw at them. They cast tiny midges and heavy Dolly Llamas. What they do best is multitask. If you wanted to buy a niche rod for a niche task, you still may end up spending that $1,000, but if what you want is something that will be fun to use, catch you fish almost anywhere, and not send you into credit card debt, these may be the best fly rod and reel option.

What the Greys GR60 7wt and GR80 Streamflex 4wt Do Worst

We ended up breaking two Greys rods on our Alaska trip—each time, a section broke while casting. Matt Bertke, an Alaskan fishing guide and lodge owner, has since had breaking issues with a few other rods his guides have taken out.

Of the several I brought back to Wyoming, one had an issue with an eyelet breaking off while busting out ice one cold, February day on a river. The others have held up great. The rods do seem more breakable than other brands we’ve tried, though not so much I wouldn’t buy another one. And as we’ve mentioned, they come with a lifetime warranty and so can be repaired with little fuss.

The reels are slightly heavier than the top-of-the-line reels from companies like Orvis and Ross. But they also work well and cost a fraction of the price.

Do the Greys GR60 7wt and GR80 Streamflex 4wt and GTS and QRS Reels Accomplish Their Mission?

Yes, they certainly do. There’s a reason why Greys rods and reels became popular years ago, and a reason why the Tital Reel won honors at ICAST. They come in at affordable prices for people getting started and for anyone looking to expand their rod and reel family. They also will do almost anything you ask of them, and do it well. Can you buy a rod or reel that does slightly better? Sure. Will you be paying for that bit extra? Absolutely.