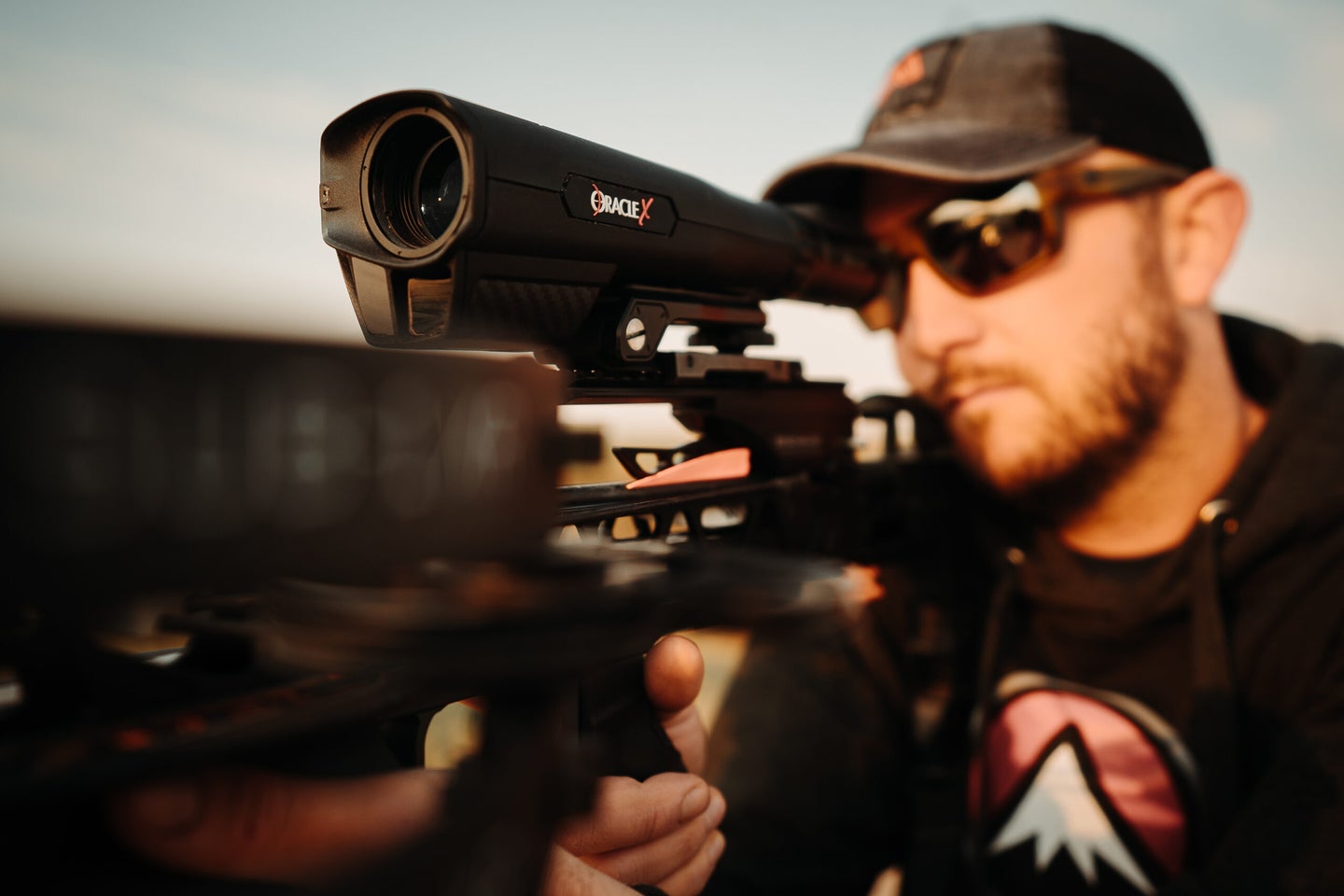 With a steady rest and a controlled trigger squeeze, crossbow hunters are able to stretch ethical shot distances farther than ever. With the impressive performance of modern crossbows, however, comes a tale of caution. It’s critically important to remember that any crossbow is still archery equipment, so don’t underestimate arrow drop. While the ergonomics and operation of a crossbow more closely mimic a bolt action than a compound, bullet trajectory is a far cry from the arc of an arrow. That’s why the combination of a laser rangefinder and a scope is prerequisite to accurate crossbow shooting.

More than a decade ago, amidst the long-range rifle craze, Burris introduced the Eliminator LaserScope. It’s a magnified rifle optic with a built-in rangefinder that allows you to input the ballistic profile of your chosen bullet. With the press of a button, an illuminated dot will appear in the scope’s reticle. I believe their marketing catch phrase for this product was: “Aim. Range. Eliminate.” Since its inception, Burris has continually improved the Eliminator each year, and then in 2018 the company applied this all-in-one concept to the Oracle — a rangefinding sight for compound bows. Quick to acknowledge the momentous popularity of crossbow hunting, Burris took its engineering expertise from the Eliminator and Oracle by designing a crossbow-specific optic known as the Oracle X. In my experience testing the Oracle X, it’s the best rangefinding crossbow scope on the market.

It seems to me, there are two distinct types of crossbow hunters. One draws a 40-yard imaginary line in the sand and will never consider shooting an animal beyond that distance. The other will leverage the full capability of their crossbows and shoot out to “extended” distances. However, all wise crossbow hunters — even those carrying the fastest crossbows on the market — respect the steep curve of arrow drop at all distances beyond 20 yards. Carry a laser rangefinder and make damn sure you’re choosing the correct aiming point in your scope before releasing an arrow, especially when you’re dealing with arrow-ducking whitetails. The Burris Oracle X offers much-welcomed shooting efficiency to hunters on both sides of the aisle.

Fumbling with a handheld rangefinder, while keeping a crossbow ready for action, will cost you valuable seconds and force unnecessary movement — both of which are liable to reduce your chances of getting a shot in the field. With the Oracle X, all you need to do is center your target in the scope and apply pressure to a small electronic pad on the grip of your crossbow. The wireless remote will send a signal into the scope and a red dot will light up along the vertical post of the scope’s reticle. You don’t need to be a long-range crossbow shooter to realize the advantages of this shooting system.

My biggest fear with the Oracle X was that it would be a bear to set up. First-generation technology is often clunky and confusing, but Burris didn’t allow the Oracle X to fall prey to these downfalls.

First, mounting the scope is simple. Verify eye relief and attach it to the optics base (usually a Picatinny rail, nowadays) of your crossbow.

Next, use the manual elevation and windage knobs to zero the scope at 20 yards. Your zero should be aligned with the center of the scopes crosshair.

From there, the scope is pre-loaded with average crossbow ballistics, so right out of the gate you’ll probably hit very close to where you’re aiming at all moderate distances (let’s say out to 60 yards). But this isn’t horseshoes or hand grenades, so close won’t cut it.

You can program the scope to perfectly match your arrow/broadhead ark by using the “truing” function in the scope’s digital menu, which allows you to assign illuminated aiming points for all distances you intend to shoot — whether it’s for fun target shooting at the range or making shots on a hunt. Mine is programmed to punch arrows into a heart-sized circle out to 80 yards. The more data you feed it, the more accurate it will be at all intermediate distances.

Once the Burris Oracle X is dialed in, you’re just a button press and trigger squeeze away from outstanding, repeatable crossbow shooting accuracy. You can press a button located on top of the scope to range targets, but you’re better off using the wireless remote pad that can be placed near the trigger well. In addition to its horizontal ranging capabilities, the Oracle X automatically calculates for angle compensation and displays a digital level to prevent you from canting your crossbow. The 2-7 variable magnification also enhances precision, and all aiming points will be accurate no matter the magnification.

So far, I’ve used the Oracle X to take several whitetails and a gorgeous velvet muley buck. I’ve hunted with it from treestands and ground blinds, in temperatures ranging from zero to 90. It has performed as promised. Last season, while hunting in late September on a deer lease I share with Outdoor Life Editor-in-Chief Alex Robinson, a mature whitetail buck emerged from a swamp and made his way toward my perch. When the buck made an unexpected 90-degree turn onto a perpendicular trail, I had just seconds to find a shooting window, get a range and loose an arrow from my Mission Sub-1 XR crossbow. If it weren’t for the Burris Oracle X, I’m not so sure I would’ve been calling Robinson to help me haul out a deer that evening.

What the Oracle X Does Best

Simplicity. That’s where the Burris Oracle X truly shines. From initial setup to use in the field, it’s easy to operate. This is important for a number of reasons. No matter your skill level, the pressure of making a shot count on a live animal can be overwhelming, so there’s definitely a fine line between practical tools and too much tech in hunting. The Oracle X is essentially dummy proof.

A significant portion of the crossbow hunting demographic is composed of inexperienced hunters or older-aged hunters who started using crossbows as a way to stay involved in the archery game. Both stand to benefit from the simplicity of the Burris Oracle X.

Also worth noting is the “Forever Warranty” from Burris — if damaged, the company will repair or replace the optic, forever, with no questions asked.

What the Oracle X Does Worst

Stature. No doubt, for what it has to offer relative to its size, the Burris Oracle X is an impressive optic. But it’s still somewhat bulky in its overall profile, which is even more pronounced when it’s mounted on a super compact crossbow.

There are a couple of competitive rangefinding crossbow scopes on the market, and both are indeed more compact than the Oracle X. However, the Oracle X is the only scope of its kind that provides variable magnification, and it’s half the price of its closest competitor.

This isn’t really a knock, but it is important to note that the Burris Oracle X does not account for wind. A strong crosswind will certainly impact your point of impact on intermediate and long shots. The only way to solve for this is to practice shooting in the wind and making small adjustments when shooting in the field.

Does the Burris Oracle X Accomplish Its Mission?

It’s clear the Burris team developed the Oracle X with a hunter-first mentality. As a high-tech optic, it would’ve been easy to cross the line between practical hunting product and computer-programmed nonsense, but the Burris Oracle X certainly adheres to the KISS (keep it simple, stupid) principle. Ease of use is elementary, and lethal application comes without a second thought. I can see this scope shrinking in size, but not in popularity, as Burris continues to innovate.