What’s the Best Choke Constriction for TSS Turkey Loads? That All Depends

Over choking some tungsten loads can cause blown patterns and poor performance. Here's how to make sure you're choosing the proper choke for your TSS turkey load 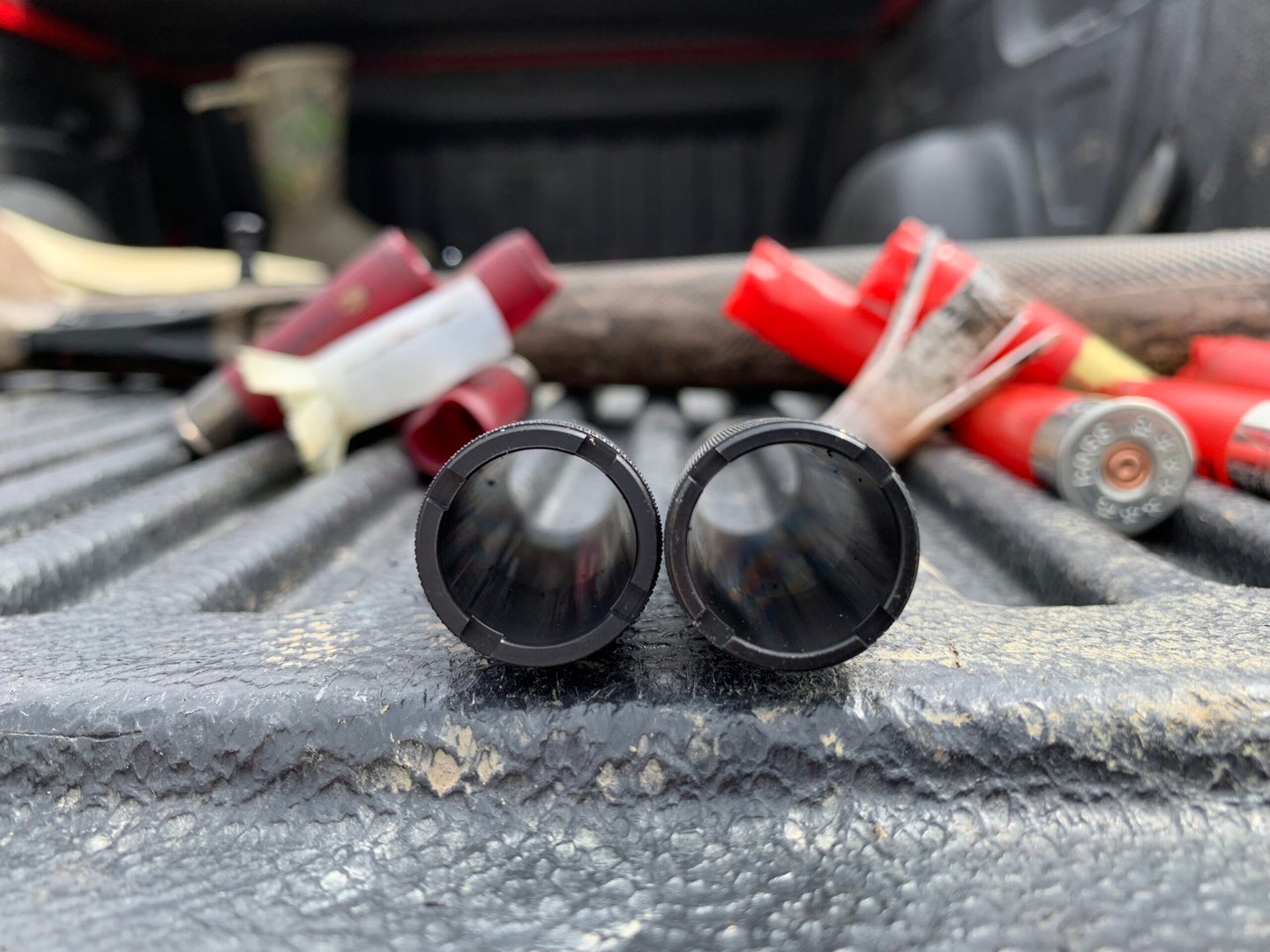 At left, is the tighter .650 Carlson's choke next to the less constricted .675. Joe Genzel
SHARE

Years ago, I worked in a large office building that housed thousands of employees. Once a year, the company tested the fire alarm system to time how fast all of us could shuffle to the exits in case of an emergency. The first few folks drinking free coffee in the lobby made it out quickly, but the rest of us had to patiently wait in a massive herd for our turn to squeeze through the doors. The same concept applies to Tungsten Super Shot (TSS) when it is choked too tightly.

This is especially relevant for turkey hunters who are shooting heavy payloads and looking for dense patterns at range. The standard way of thinking about shotgun patterns dictates that the tighter choke constriction you choose, the tighter your pattern will be. But that’s not necessarily the case with TSS.

If you choose too tight of a choke to pair with your a TSS load, the pellets at the front of the shot charge will exit the muzzle just fine, but the ones behind them will be slowed down, resulting in a longer shot string and a possible blown pattern.

This happens because TSS shot is hard, it’s trying to leave the barrel at a high rate of speed, and then it gets too tightly constricted as it reaches the muzzle. Softer shot, like lead or bismuth, is more malleable, so it can handle the energy and tighter choke constriction much better. TSS can’t. Because of its 18 g/cc density, there’s nowhere for that energy to go and the pellets simply can’t make it out of the barrel in a timely manner.

“If you try to over constrict [TSS] only so much of the shot will be able to get through in such a time, and so it just kind of creates a backup,” said Nick Charney of Apex Ammunition. “The shot is hard so it can’t give, and just starts leaking out. As soon as the pellets get free [of the barrel] there is so much force behind them that they start spraying everywhere.”

Every gauge of shotgun has its own bore diameter, which is measured forward of the chamber but before any restrictive choke, according to standards set by the Sporting Arms and Ammunition Manufacturer Institute (SAAMI). The bore of a 10-gauge is .779 inches; 12-gauge is .729; 16 is .667. The smaller the gauge, the smaller the bore. When you insert a screw-in choke at the muzzle it constricts the opening and the shoshell’s payload will pattern tighter.

Let’s use the 12-gauge as an example. An improved cylinder choke can squeeze the bore diameter from .729 to .720. Modified can take it down to .710. Put in a full choke (.694) and that constriction becomes considerably tighter (as will your pattern). Turkey chokes typically range from .675 to .640, delivering even tighter patterns. The reason for the added constriction is so more of the pattern is likely to impact the turkey’s head and neck, which is a relatively small target.

Finding the Right Choke for TSS

Strangely, not all TSS loads pattern poorly in extra-tight turkey chokes. Different shotgun, load, and choke combinations are simply going to perform differently. Some TSS will pattern well with a .640 or .650 constriction (12-gauge). Others will like a .665 or .675. That makes pairing the right TSS load and choke a challenge. It also gets expensive when you are searching for the optimal pattern because you have to shoot so many different loads —TSS can cost upwards of $60 for a box of five shells.

“We have found that Federal Heavyweight 12-gauge loads pattern best out of a .650 or even .640 choke,” said Scott Carlson, owner of Carlson’s Chokes. “But a load like Apex, it will shoot better from a more open choke, like a .675.”

Wad technology, shot cushions, how the shot is loaded, shot size, the physical makeup of the pellets themselves, and even barrel fouling all factor into how a payload performs when it passes through the constriction of a choke. The diameter of the forcing cone matters too. The larger the back boring (you can measure this with a bore gauge), the more open choke you should be able to shoot for best pattern results. For instance, Mossberg 12 gauges, like the 935 or 835, generally have a slightly larger forcing cone diameter than Benellis or Berettas, so they should shoot a 2-ounce payload of TSS No. 9s better with a .675 choke. The Italian guns typically shoot best patters with more constriction. But the brand of shotshell plays a factor too.

“You might see a really good pattern with a tight choke at 30 yards, that [looks terrible] at 50 yards,” said Brandon Cerecke of Boss Shotshells. “Also, the 50-yard pattern might be wicked with a looser choke, and more open at 30 yards than it would with the tight one. It’s all about compromise. There’s no silver bullet.”

Putting TSS To the Test

To see how choke constriction affected TSS, I shot two 12-gauge loads—Boss Tom (3-inch, 2-ounce, No. 9s) and Federal Heavyweight (3-inch, 2-ounce, No. 7/9 blend)—through Carlson .650 and .675 chokes at 40 and 60 yards using a Benelli Super Black Eagle 3 Performance Shop Turkey semi-auto. I shot at 35-by-35-inch pieces of butcher paper to record pattern results. To measure pattern density, I found the thickest core of the pattern and drew a 10-inch circle around it. All shots were taken from a sitting position leaning against the wheel of an ATV to simulate a hunter shooting a turkey with their back against a tree. The weather was sunny, 65 degrees, with low humidity. I shot into a five to 10 mph head wind.

To be clear, the loads were not tested against one another. Their payloads are not the same—Boss has an average pellet count of 724 No. 9s and Federal’s load has 610 of the blended 7/9 pellets. I chose the loads because I knew Boss patterned better at 40 yards from a more open choke, and Federal Heavyweight liked a tighter constriction. Also, I am not advocating shooting turkeys out to 60 yards (maximum range is for each turkey hunter to decide on their own). I only used that yardage to see how the patterns held up at longer distance.

I shot both loads three times from each choke at the two yardages and averaged them all. The results can be seen in the table above. From 40 yards, Boss had a three-shot average of 314 pellets inside a 10-inch circle with the .675 choke versus 295 with the .650. Its best pattern delivered an incredible 351 pellets inside the circle through the .675.

So, What’s the Best Choke For TSS?

By now you probably know the answer to this question. You must pick a choke and load that are compatible. From testing and talking to the experts, the best general use TSS choke is going to be between .660 to .665. Those constrictions will also perform with larger lead shot (No. 4s, 5s, and 6s) too, which could come in handy if this ammo shortage continues because you will have a more versatile choke. But if you really want to get serious about premium TSS patterns, you must spend the money on multiple chokes and shotshells and do the pattern work in your own gun.

Also, a load and choke combination can deliver dense patterns through your shotgun, but the point of impact may not be consistent, which is critical in turkey hunting. I’ve shot several TSS loads this spring that threw great patterns off the mark at 40 yards. Limiting shot distance to inside 30 yards helps negate that (the shot has less time to string out), but every gun has its own quirks and shoots different. It will love some loads and hate others—keep that in mind as you seek out the ultimate TSS pattern.

Read Next: The Best Turkey Loads of 2022

“All guns at a microscopic level are different,” Charney said. “You buy a very affordable gun…those manufacturing processes aren’t as precise as some of your upper end shotguns, so there are going to be degrees of variance. What I tell people is TSS No. 9s are the most popular. They tend to pattern best and get the best pellet counts. And what you really need to do if you want to make the cleanest shot you can, is go out and pattern your gun and find the point of impact. Because we know that some guns have issues with that.

“Spend $100 and get two [different loads] of TSS and find the best hold point at a yardage you’re comfortable with. That little bit of extra money will give you more confidence in your gun.”