The Mossberg 940 Pro Turkey is a specialized, optics-ready gobbler slayer at an affordable price 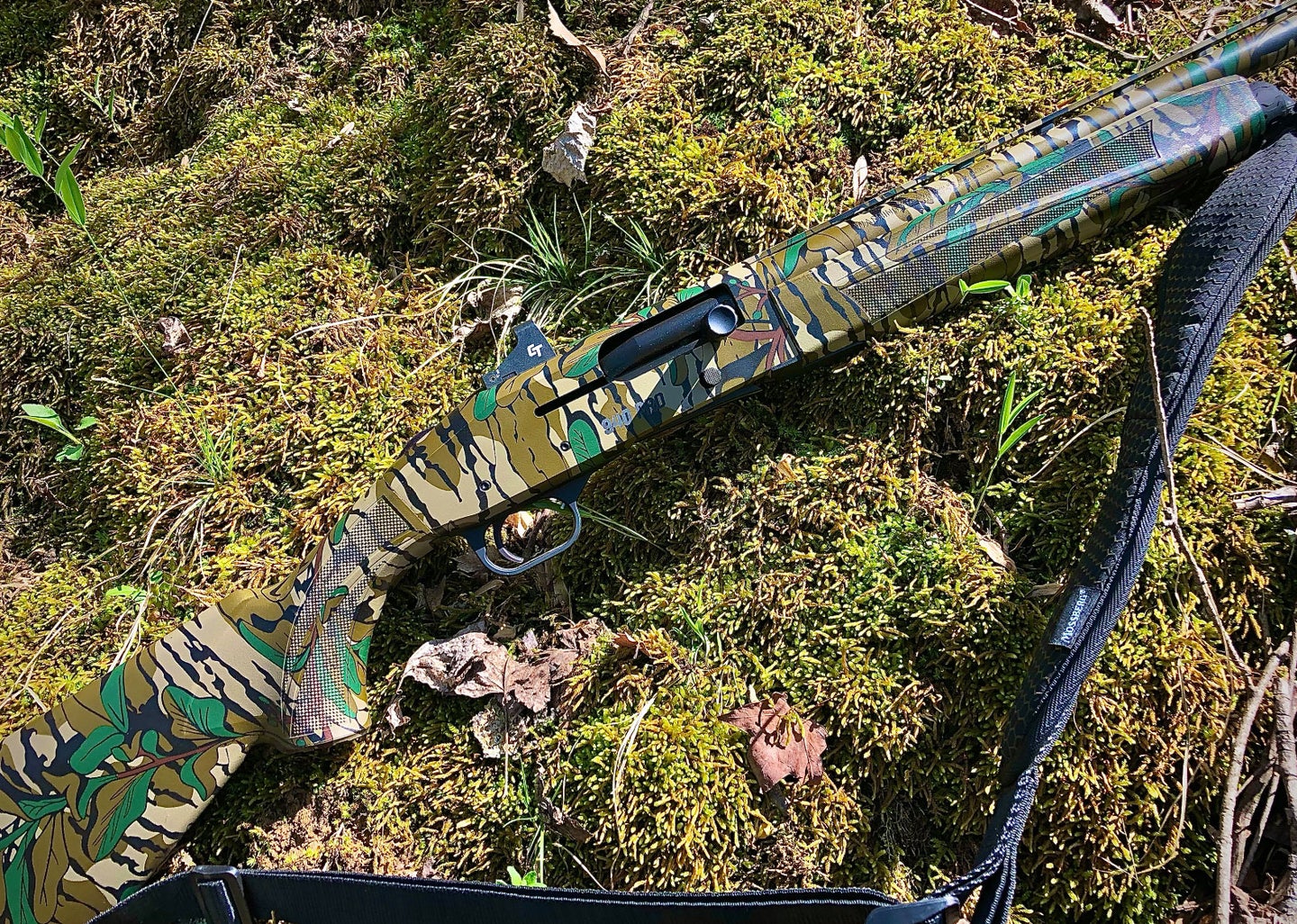 Mossberg shotguns are perfect for turkey hunting. They’re functional, durable, affordable, they pattern well, and they’re unlovely, which are the exact attributes serious turkey hunters want in a gun. Mossberg’s newest, and perhaps best, turkey gun is the 940 Pro Turkey, which is an extension of the JM 940 Pro line that the company introduced back in 2020 with the help of iconic competition shooter Jerry Miculek. There now are field, waterfowl, and tactical variants of the 940 as well.

The Pro Turkey gun has some clever features that turkey hunters will appreciate, most notably the cut-out in the receiver that’s designed to fit any red dot sight that has a Shield RMSc-pattern footprint. This design allows the sight to mount directly to the receiver with two screws, and it also keeps the sight mounted low on the gun for a sleek profile. You can see the same ingenious design in the 940 Pro Tactical. The low mount prevents the shooter from having to take their cheek off the stock to see through the sight.

About the Mossberg 940 Pro

The 940 platform is an upgrade from Mossberg’s 930 and 935, which are budget-priced, gas semi-autos known for running consistently when kept clean. The last part is key. Plenty of 930 shooters would find that their guns started to gum up after a few hundred rounds (in general, gas guns run dirtier).

To fix this, the 940 Pro utilizes a cleaner gas system. The gas piston, magazine tube, hammer, and sear are nickel-boron coated. The 940 also utilizes a gold-colored spacer that’s designed to prevent moisture and carbon from building up around the mag tube. So, do the upgrades work? I’ve fired about 100 rounds of target and turkey loads through my test gun without issue, (it’s a turkey gun after all so it’s not going to see thousands of rounds of action). However, there are a variety of Youtube videos “burning down” the new tactical version of the 940, which has the exact same action as the Pro Turkey. So, yes. It seems that the internal upgrades do help the gun run cleaner and smoother.

Three Outdoor Life editors hunted with the 940 Turkey Pro this spring. We all found the gun to be easy to carry and maneuver through the woods while not being too light. I think the real value in a light turkey gun is that you’re able to hold it in a ready shooting position, resting on your knee more comfortably for long waits while that phantom gobbler closes the distance. But a good turkey gun must be well-balanced too, and the 940 certainly is. At 7.5 pounds the 24-inch barrel version is just right. The 18.5-inch barrel version is a quarter-pound lighter and certainly more maneuverable, but there was noticeably more muzzle jump while shooting the shorter gun. Just like some ultra-light mountain rifles, ultra-light turkey guns can be more difficult to shoot accurately and make quick follow-up shots with.

Because of this, we all took turns hunting with the longer model. I killed a gobbler in Wisconsin with the 940 as he crested a small hill. I knew the bird would appear on either side of a deadfall, so I pointed the gun in the middle of the obstruction and then waited for a bright red head to appear. I heard him spit (which means he’s close) and simultaneously saw him pop up from behind the hill, not 20 paces away. I swung the 940 to his neck, centered the red dot, and killed the gobbler where he stood. A turkey gun that handles well helps you get on target, aim quickly, and shoot without thinking about it. That’s exactly how my hunt went down in Wisconsin.

Gear editor Scott Einsmann had a similar experience in Indiana.

“The Mossberg 940 carried well slung and in hand as I hauled it three miles through hilly terrain,” Einsmann says. “I never noticed the gun’s weight as I closed the distance on the tom. I inadvertently tested the 940’s optic mounting system when I stumbled while crossing a stream with the gun breaking my fall. My weight landed right on the top of the optic, but 30 minutes later I confirmed the zero with a stone-dead turkey. I had the shotgun balanced on my knee for 10 minutes while waiting for the bird to close the distance and I never tired or got shaky. At 30 yards he was directly behind two trees, when he started to get nervous. I typically hunt with an old Citori over/under, which I’ve had since I was 18 and it’s like my right arm. But, jumping over to the 940 was intuitive. The tom popped his head out behind the tree and without even thinking about it I dropped the dot on his head and squeezed the trigger. The one negative I found was that the safety was sticky and took some effort to slide off, which could be a problem spot if it slows you down on a snap shot.”

Sadly, the 940 was not undefeated this spring. Senior deputy editor Natalie Krebs missed a tom with it when he snuck in from the left side. A bad case of gobbler fever sent the tom flying off, unscathed. But like a true professional, Krebs didn’t blame the gun.

“Overall, the 940 is a relatively nimble gun that didn’t feel too heavy or too whippy,” she says. “It’s not a chore to carry around the woods all day, and the thick butt pad was a welcome feature when sighting in a red dot and patterning turkey loads.”

Besides it’s handling, the 940 has several other features that make it a solid turkey hunting gun. The action is lively (it kicks out target loads and turkey loads with enthusiasm), but you can also work it quietly. One of the reasons many veteran turkey hunters shy away from semi-autos is because allowing the bolt to slam home while loading the gun is a great way to get a gobbler to stay silent on the limb. But the 940’s bolt design allows you to ease the action forward without worrying about a malfunction.

One of the pros of shooting a gas, semi-auto turkey gun is that it takes some of the felt recoil out of vicious turkey loads. The gun still kicked plenty with the 1¾-ounce hunting loads we shot, but not quite as bad as a similar sized Mossberg pump I’ve hunted with for years. The cushy butt pad certainly helps.

At 3.5 pounds, the trigger is wonderfully light for a shotgun. Though it is a bit creepy. To get the trigger weight I averaged 10 pulls with a digital scale and notably, I did get a two-pound variance in pull weight (highest was 4.2 pounds and the lowest was 2.2 pounds). To be fair, I’m not looking for PRS rifle precision from my turkey gun trigger. I’d say that overall, the Mossberg 940’s trigger was was better than average for a turkey gun.

How the Pro Turkey Patterned

Killing turkeys at close-range is what it’s all about, but these days many turkey hunters want their guns to be effective at 60 yards (and sometimes beyond). So we patterned Federal Heavyweight TSS 1¾-ounce No. 9 loads at 40 and 60 yards. All patterns were shot with the X Factor, XX-Full .670 turkey choke that came with the gun. I shot five patterns at each range and averaged them. At 40 yards the Pro Turkey produced an average pattern of 161 pellets inside a 10-inch circle. At 60 yards it averaged 68 pellets inside a 10-inch circle.

This is very good performance out of a turkey gun and I’m more than confident that the 940 can kill gobblers out to 60 yards and probably beyond (but I’m not interested in shooting turkeys that far away).

One important note is that both Krebs and I shot the 18.5-inch barreled version without an optic, using just the HIVIZ front sight provided. The gun patterned high and to the right for both of us, which would require some shim kit work if you don’t intend to hunt with a red dot. Importantly, the stock is adjustable for length-of-pull, cast, and drop so with some adjustments we likely would have been able to get on target without the optic. However, this shotgun is begging to have a red dot sight put on it. More on this below.

Sights for the Mossberg 940 Pro Turkey

My favorite feature about the Mossberg 940 Pro Turkey is the cut-out in the receiver for mounting a red dot sight. But you can’t just throw any old red dot on there. It’s designed specifically for the mini Shield RMSc-pattern micro dot sights. If you already have a red dot sight you like, you could use an adapter plate but then you’re not taking advantage of the low-profile cut in the receiver.

The shotgun also comes with a variety of HIVIZ front beads in red, green, and white. This might seem inconsequential if you’re going to throw a red dot on the gun, but it’s not. For example if you plan to shoot a red dot, it would be wise to select a white or green front bead, so when you pull the gun up quickly you’re not seeing two red dots in your sight picture. After some experimentation, I went with the smallest white front sight in the kit. It’s not distracting when I’m shooting, but if for some reason my red dot fails on me, I can use the bead as a backup (I know I’ve just got to aim low). One small critique is that the shotgun doesn’t come with a rear sight, though this isn’t an issue if you’re running a red dot.

What the 940 Pro Turkey Does Best

The 940 packs well-thought-out features into a reasonably priced semi-auto turkey hunting gun. There are a variety of souped-up turkey guns that will cost you well more than a grand, and the 940 can perform and pattern right along with those shotguns without jacking up the cost.

Where the 940 Pro Turkey Falls Short

The fit and finish on the 940 Pro Turkey is hit and miss. To my millennial eye, the Mossy Oak Greenleaf camo job looks sick. Unfortunately, it’s already starting to fade in places on my test gun (most camo paint jobs eventually do fade). Plus, the fore-end plastic feels a little flimsy around the barrel and where it meets the receiver. But these are small quibbles. This is a turkey hunting gun. Not a fine bird gun.

The 940 Pro Turkey is just what hunters want in a modern turkey hunting gun: comfortable handling, great patterning, optics-ready, and reliability. You could spend more on a higher-end gun for niceties, and maybe a little more elegance, but you won’t be getting much more in actual performance. And in the end, it’s field performance that puts tags on gobblers.