Shotgun Review: The A300 Ultima Is Beretta’s Latest Attempt to Build a More Affordable Auto-Loader

The Italian gunmaker designed the Ultima after its flagship shotgun, the A400 Xtreme Plus, but at half the price 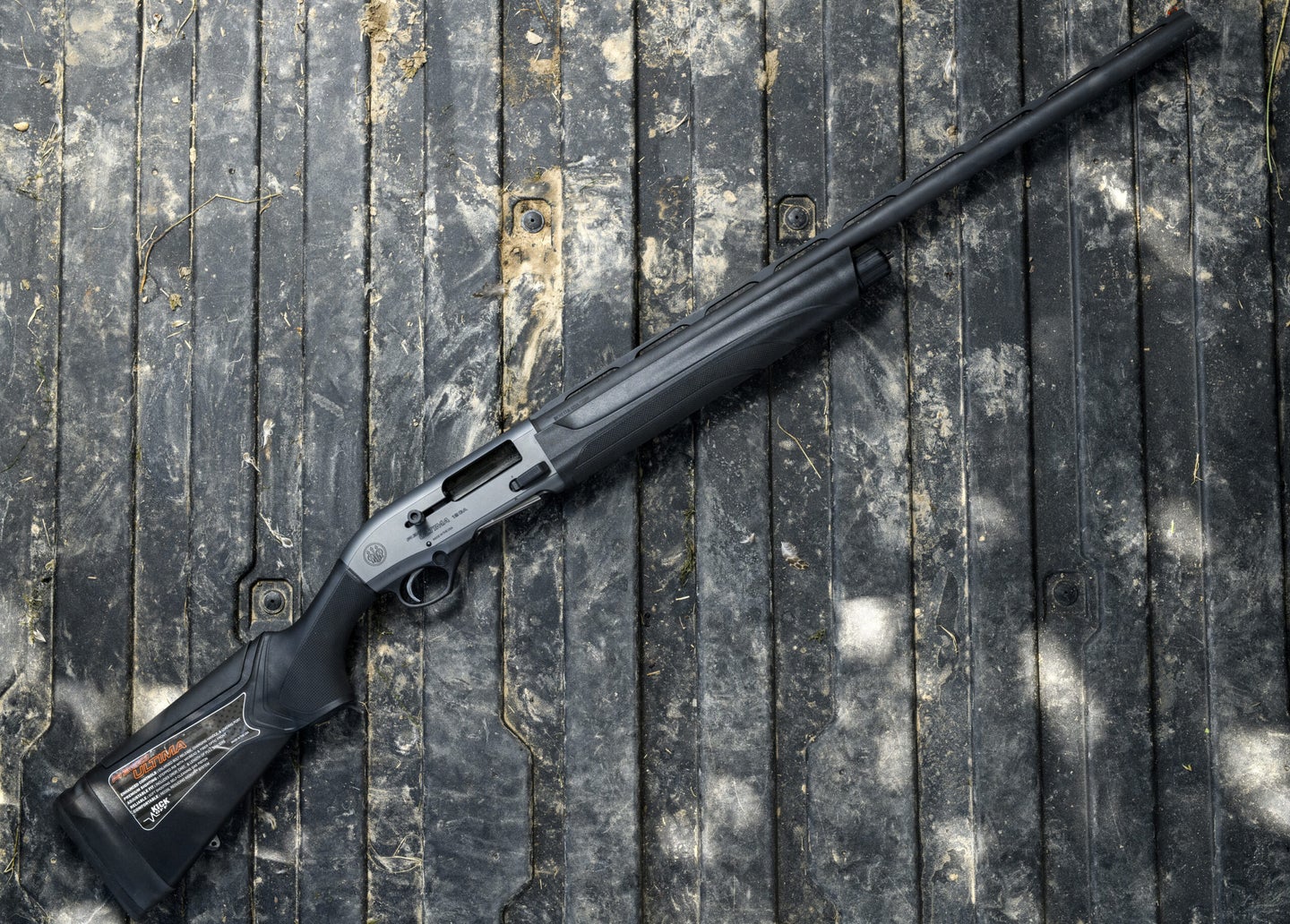 The A300 Ultima is Beretta's latest attempt at an affordable 3-inch semi-auto shotgun. Stephen Maturen
SHARE

The 3-inch A300 Ultima is Beretta’s latest attempt at filling a gap left when the Italian gunmaker discontinued the A390 and A391 series of shotguns. For decades, Beretta made premiere gas-driven auto-loaders at a reasonable price. That came to a halt when production of the AL391 Urika ended about a decade ago. Since then, Beretta has struggled to build a mid-level shotgun that gives hunters many of the same features they will find in a more expensive semi-auto, like their A400 Xtreme Plus. The old A390s and A391s—as well as the A301, 302, and 303 that came before those guns—were reliable, gas-driven autos that didn’t break the bank (you can still find used models for less than $900).

The fact that Beretta hasn’t been able to duplicate an affordable shotgun that equals the early A-series guns is not a knock against the company. The bar was set high by the A390s and A391s. Also, sourcing materials for guns has become a more challenging and expensive endeavor than it once was. Beretta’s first attempt was the A300 Outlander, which was released in 2012. It was a functional auto-loader, but not built to the same quality of its predecessors. The craftsmanship of the new A300 Ultima is much better than the Outlander, but there is still work to be done in order to return to the standard Beretta set decades ago by building high-functioning, low cost automatic shotguns.

How We Put the A300 Ultima to the Test

The A300 Ultima was one of 17 duck hunting shotguns a group of four editors—Colin Kearns and Phil Bourjaily of Field & Stream and Alex Robinson and myself from Outdoor Life—put to the test. While testing the shotguns, we considered how the guns handled, if they were built well, the versatility of the shotgun, its reliability, and finally whether the gun is worth the price you pay for it.

To do this, our group hunted early-season teal for three days at Pintail Hunting Club in Garwood, Texas. We shot blue-wings each morning on huge wetlands or smaller flooded rice fields. In the afternoons, our testers shot all the guns on five-stand to get a better feel for how the guns handled on different shooting presentations, and to see if any of the autos or pumps failed to cycle shells. Bourjaily and I also patterned every gun on 30-inch paper targets from 35 yards. The standard practice is to pattern shotguns from 40 yards, but we wanted to see how they shot at 35 because that is a more common (and realistic) range for most hunters to kill ducks.

Beretta A300 Ultima Specifications and Features

Beretta offers the A300 Ultima in three exterior finishes: black synthetic, Mossy Oak Bottomland, and Realtree Max-5. The Ultima uses Beretta’s Mobil choke system, which is also used in the Silver Pigeon field models, A300 Outlander, and some 391 series shotguns. They also have an Optima-Choke system, which is used in Beretta’s higher end guns, like the A400, DT-11, 692, and SV-10.

How the Beretta A300 Ultima Performed at the Range

Bourjaily and I patterned all the 12-gauge test guns at 35 yards inside a 30-inch circle using Federal Speed Shok 3-inch No. 2s with a charge weight of 1 1/8 ounces and muzzle velocity of 1,550 fps. Beretta shotguns typically produce a 60/40 pattern (60 percent above point-of-aim and 40 percent below). The Ultima followed that trend, delivering 105 of a possible 140 pellets (75 percent) evenly across the target. The pattern percentage of the Ultima was on the low end of our test guns, but the pellet density was consistent enough to kill ducks.

The A300 Ultima looks like the A400 Xtreme Plus, but it handles much differently. That’s because the Kick-Off recoil system in the A300 only has two hydraulic dampeners inside the stock; the A400 has three. When I shot the A300, the buttstock flexed into my shoulder and pulled at my cheek. After the gun fired and returned forward, the stock flexed again and pulled at my face for a second time. It wasn’t painful, but a noticeable annoyance that took my focus away from breaking clays and killing teal.

The good news is you can completely remove the Kick-Off system from the stock, which I discovered a few months later during a January duck hunt with a friend who’s a sales rep for Beretta. Once you take out the dampeners, the flex goes away, and the gun is far more enjoyable to shoot. A piece of plastic that comes with the shotgun replaces the Kick-Off. It only takes a few minutes to make the swap, which you can do yourself.

An area where the A300 outshines the more expensive 3½-inch A400 Xtreme Plus (Beretta’s Flagship auto) is its slender lines (well, slender by Beretta standards). The gas system that drives these semi-autos adds bulk to the fore-end because the gas piston is housed inside it. The A400 has an especially thick feel to it. Beretta made the A300 fore-end less girthy. It measured right at 5 inches from one side to the other where the fore-end met the fore-end cap versus 5½ inches for the A400. It’s not as sleek as a Benelli SBE3, which has a fore-end circumference of 4½ inches, but you can get the A300 moving fast and it’s easier to maneuver and carry than the A400.

Beretta designed the exterior of the Ultima to mirror that of the Xtreme Plus with the caveat that the A300 has a less expensive synthetic (plastic) stock and fore-end. The A400 has a rubber overmold. There’s an enlarged bolt release button, which has never been seen on a price-point Beretta (unless it was an aftermarket upgrade). It’s a nice feature that gives you a larger target to press when you want to close the bolt. Duck hunters will appreciate that when they’re shooting with gloves on. Its only drawback is because it’s so big, the bolt will sometimes close when you don’t want it to. After hunts, I like to carry the gun on my shoulder and place my hand on the barrel for the walk out. Every time I did that with the chamber facing down, the bolt release button struck my shoulder and sent the open bolt forward, catching my shirt and some skin in the action.

The bolt handle is oversized as is the load gate, making it easier to push shotshells into the magazine. There are also rubber inlays on the pistol grip, a small but convenient improvement from the A300 Outlander. During hunts in the rain or snow, that extra grip gives shooters the confidence that the gun is secure in their hands.

A cheek pad was inserted into the stock to help tame recoil. When the Kick-Off system was in use, that pad made the recoil worse because it pulled at my face. But once the Kick-Off dampeners where removed the pad did a much better job of diverting recoil. I also like these pads, because it lets me know I have a solid mount when my cheek touches the rubber.

Beretta put a 7x7mm stepped rib on the A300 Ultima to give shooters a better sight plane. It didn’t make much of a difference to me, but I know plenty of technical hunters that put stock in such things. If you fall into that category, then you will likely enjoy that small attention to detail. The red fiber-optic front sight is obtrusive. It’s almost the size of a pencil eraser, so you may choose to swap it out. Our test group also noticed that the finish on the barrel of the A300 scratched easily. Just a few rides in the back of a UTV and it looked like a gun that had suffered through at least three duck seasons.

A Look Inside the A300 Ultima

Our test group had zero malfunctions with the A300, but there were issues with the trigger not resetting properly on the early runs of the Ultima. It wasn’t a widespread problem, but I have seen video and heard of a few folks experiencing this malfunction. What happens is you shoot your first shell, and a spring in the trigger group fails to reset the hammer properly, so you can’t fire the next shell. If this occurs, all you need to do is replace the hammer, which isn’t costly, but it isn’t exactly inconvenient.

To field strip the A300 Ultima, unscrew the fore-end cap (it does not have the same easy, quarter-turn cap the A400 has), slide off the fore-end, and remove the barrel. Newer Berettas have the gas piston attached to the barrel, which ensures you never lose it. To remove the bolt and the buffer tube that slides over the magazine, you must take out the bolt handle and then press the trigger to slide it forward. The trigger group is held in place by a single pin, so it’s not as difficult to remove or replace for cleaning.

The Versatility of the A300 Ultima

You can use this gun to hunt any game that requires a shotgun. It’s light enough to carry all day in the uplands and would make a serviceable turkey gun. There are better options for deer hunting since it isn’t drilled and tapped for an optic. And since it’s a gas gun, the Ultima will have no problem shooting light target loads.

A sticking point for me on this gun is that you cannot affix an extended magazine tube for snow goose hunting. That’s not a dealbreaker for everyone, but consider that a gas-operated Winchester SX4 is virtually the same price, has a larger 3½-inch chamber, and can be outfitted with an aftermarket magazine tube. That makes it difficult for me to pick the A300 over it. But if you don’t care about snow goose hunting with an extended mag, the Ultima will do all that you ask of it.

Is the Beretta A300 Ultima a Good Value?

If you’re looking for a new 3-inch shotgun with a synthetic or camouflage exterior for under $900, the Ultima is a fine choice. Its closest competitors are the Franchi Affinity 3 and the Winchester SX4, which is available in a 3-inch model. You could argue that both those guns are slightly better or equal in value, so consider each of them before deciding.

Beretta’s A300 Ultima doesn’t live up to the A390 and A391 lines (nor does the Franchi, Winchester, or any other modern 3-inch shotgun outside of Benelli’s Super Black Eagle 3). The Ultima is a good shotgun, but if you can find an old Silver Mallard on the used market, there’s no comparison. The A390 is a far better gun that will last you a lifetime and then some. I’m not sure the Ultima will do the same; time will tell.

Read Next: The 6 Best Hunting Shotguns of All-Time

The A300 Ultima is the closest Beretta has come to building a quality price-point 3-inch auto-loader since it stopped manufacturing the A390 and A391. I don’t suspect they will return to producing shotguns of that ilk for under $900 ever again—walnut and steel shotguns are more expensive to make, and the profit margins are thinner. At the same time, there are not many new 3-inch guns that come with the same features and functionality as the A300. If you are looking for an affordable, modern synthetic auto there are few shotguns that are its equal.