How to Shoot Iron Sights

Many shooters cut their teeth on .22s or BB guns with iron sights, but is there still a place for them on modern rifles and pistols? 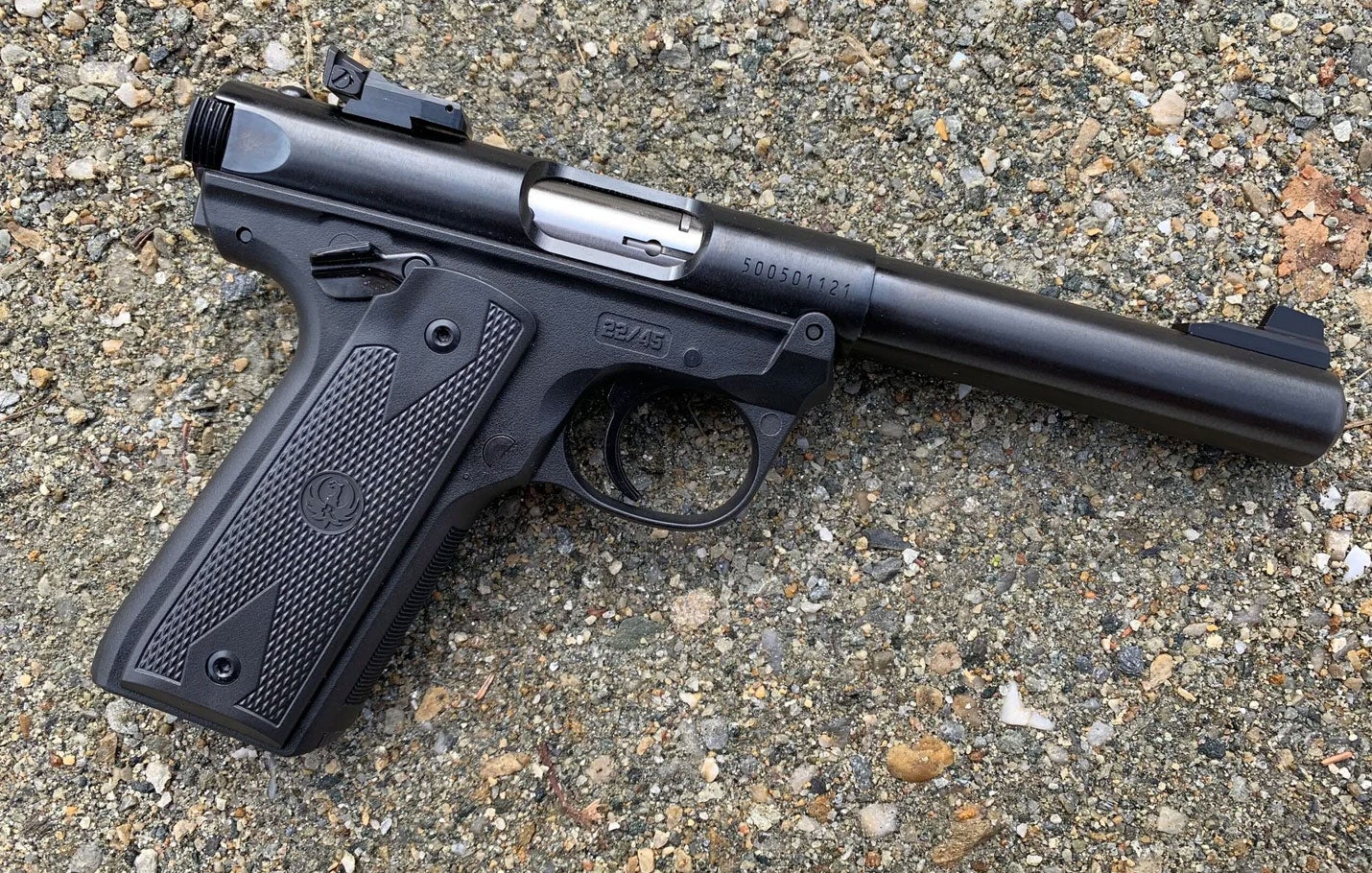 I’m not sure at what age I first acquired a BB-gun, but I grew to know that crude picture through the sheet-metal iron sights well. I went through BB’s by the carton, and this practice as a child certainly helped my development as a marksman. Many shooters and hunters got their start with similar means—BB guns, .22s, and iron sights. There are still many parents who believe that kids should learn how to shoot with iron sights before moving on to scopes or red dot sights.

In some ways, iron sights have become obsolete, and even when it comes to introducing children and new shooters to the sport, red-dot sights can be a better option. However, iron sights certainly still have their place. There are scenarios where they are relevant and effective. Contrary to what you might believe, skilled shooters can shoot iron sights with incredible accuracy, and shooting well with them is a skill that every shooter should have in their back pocket.

Why Bother with Iron Sights?

Telescopic sights for hunting rifles have been pushing irons out for almost a hundred years, and in recent decades, red-dot and magnified optics have been taking charge of the tactical and defensive world as well. Even the last holdout—handguns—has seen increasingly widespread adoption of small, dependable red dot sights.

Despite all this, every shooter should learn how to shoot well with them. Most handguns primarily utilize iron sights, and some shooters still prefer them for their simplicity and low profile. And irons are still a great option for hunting rifles intended for short to medium-range applications.

Many turkey hunting shotguns and slug guns come with iron sights, and while plenty of shotgun hunters opt for a red dot or scope, there’s value in keeping it simple (and more affordable) and running iron sights. (Read our overview of sights for turkey guns here).

There are plenty of shooters using iron sights who can hang right with riflemen using low-powered optics. On a bear defense rifle, I prefer to have open sights. Any encounter where I’ll have to use the rifle will be close at close range, in thick cover, and it will likely happen quickly. I’m flat-out faster with my rifle using iron sights.

So as long as they’re still making rifles and handguns with irons, you should know how to use them.

How to Shoot Iron Sights Accurately

Accurate shooting is all about consistency of sight picture. Of course, the other shooting fundamentals matter too, but for this discussion let’s just assume you’ve got the basics like breathing, trigger squeeze, and shooting form figured out. From here, a consistent sight picture is vital for accuracy for any sighting system, it just requires a little bit more effort when shooting iron sights. Here’s how optimize your sight picture to shoot iron sights more accurately.

Focus on the Front Sight

Focus is the biggest challenge for your eyes when shooting iron sights, and you must focus consistently. Most magnified scopes allow you to focus the reticle, and many also allow for parallax focus. Ideally both the target and reticle are in crisp, perfect focus, allowing you the most precise sight picture possible. It’s a little different with iron sights.

When shooting with irons, your eyes are dealing with 3 different planes: the rear sight, front sight, and target are all at different distances. Your eye can only focus clearly on one plane. Your most accurate shooting will always be with your focus on the front sight—with the rear sight and target slightly out-of-focus. With most sights (especially peep sights), a crisp focus on the front sight will naturally align your front sight with the rear consistently each shot and allow for the most precise sight picture.

For many defensive or action shooting applications, instructors will recommend focusing on the target. Sometimes under duress, shooters will get bogged down searching for their front sight when they need to be focused on a target. These methods certainly have their place. But when you’re shooting for precision at distance, focus on that front sight.

For a bit of context, I quizzed USPSA Grand Master and top precision rifle shooter Sean Murphy on sight focus, and he brought some great perspective.

“It’s really all relative to the level of precision that you need,” says Murphy. “At close range, a shooter may be better off focusing on the target, and sometimes the entire pistol is used by the brain as a sight of sorts.”

Murphy indicated that the proper focus is dependent on several factors like distance, required level of accuracy, and necessary speed. For most shooters, a hard focus on your front sight will give you the most accurate results if you have the time to do it.

Your sight picture (as it relates to the target) is another critical aspect of shooting well with iron sights. Here there’s some room for personal preference and context. The most accurate sight picture for most shooters is going to be one that’s crisp and repeatable. Your preferred sight picture is something that you’ll have to consider when sighting-in, practicing, and hunting.

Many shooters consider the most accurate sight picture for iron sights to be a 6 o’clock hold. What this means is that the shooter aims in manner that puts the top of the front sight post at the bottom (or 6 o’clock position) of the target. Many find this to be the most repeatable and consistent sight picture. I used to try to keep just a sliver of white between my sight post and the bottom of the bullseye on a service rifle target. The downside of this is that at any given range, the bullet will actually be impacting a certain distance above the front sight post (this all depends on the size of the target and range). This is usually the most accurate sight picture for punching paper.

A center-mass hold or “Navy hold” is a more practical sight picture for most hunters. With this sight picture, you’re holding the top of the front sight right in the middle of the target. The bullet should impact right where the top edge of the front sight is being held. This is more useful for hunting applications because a hunter is inherently going to be presented with a variety of target images, distances, and conditions. Just be aware that sights that are harder to see, as well as varying light conditions can make a big difference in your point of impact. You’re aiming based on what your eyes see, and that can change enough to make a difference with varying conditions. You’ll tend to shoot high in darker conditions, or on a darker target—and lower in bright conditions with a crisp sight picture.

There are several different basic styles of iron sights, and the ones you pick will depend on what you need to use them for. Some sights work great for all-around shooting, and some are very precise and specialized (they typically have half or quarter-M.O.A. adjustments). The most basic delineation between common sight styles is between peep rear sights and notched rear sights. Both styles typically use a single dot or post front sight—they’re just viewed and aligned with the rear sight differently.

A peep rear sight typically forms a complete circle or ring that the shooter looks through—aligning the front sight and target in the center of the “peep.” Peep sights have a long history of use and have been common on military arms for decades—they’re also used on compound bows. Peep sight systems are inherently accurate because when focusing properly, the human eye naturally centers the front sight in the center of the peep.

There are many variations in peep sights—from fine-tuned, tiny-hole match sights to ghost-ring peep sights designed for speed. These can be ideal for a brush rifle like the Marlin 1895. Rather than a front post, some target sights use a sort of front peep as well, where the shooter lines up concentric circles with the bullseye in the middle.

Peep sights are common on AR-15 rifles, an although many don’t include iron sights anymore (because optics are so popular. It’s never a bad idea to put a flip-up set of backup sights on your rifle. They are typically the most-accurate style of sight, but they can be difficult to use in low-light, especially if you have a small peep and dark front post.

An even more-common style of sight features a notched rear sight. There are many different sub-styles, but basically, the notch in the rear sight is used to center the front sight. This style of sight is typically simple and rugged, and what’s found on the Red Ryder BB-guns from many of our childhoods.

Many rifles and handguns use what we call 3-dot sights—which are simply front post/notched-rear sights that feature a dot on the front post and a dot on either side of the rear notch. The dots make the sights more visible and quicker-to-acquire. Often, the dots will be white paint, fiber-optic, or even feature glow-in-the-dark tritium elements.

Another common style of rear-notch sight are the express sights. Common on dangerous game rifles, and even optimized for handguns, express sights are all about speed. They might not be as precise as a small front bead and rear peep, but they excel at getting you on target quickly. Notch-style sights are typically great for hunting because they’re easier to use in low-light—especially high-visibility sights. It’s also easier to track what’s going on outside your sight picture since it’s not obscured by the peep. Generally though, notch sights are less precise and it’s a little tougher to keep your impact elevation consistent.

Because it’s typically much easier to attain a higher level of accuracy and precision with magnified optics, many people think that you can’t shoot accurately with iron sights. They’re wrong. My eyes were opened during my service rifle shooting days, when I saw that some shooters could reliably hit a 12-inch 10-ring at 600 yards with an AR-15 using iron sights. Eventually I got to the point that I could also shoot pretty well with irons. Many bullseye pistol shooters could shock you with how accurately they can shoot with iron sights as well.

At 100 yards, I’ve shot lots of one-inch groups using iron sights over the years, and even my kit .50 cal muzzleloader will shoot 2-inch groups with patched roundballs at 100 yards using its primitive iron sights. The key to shooting iron sights with precision is the target—particularly having a target that allows for the most precise, consistent sight picture. At distance, this means a bigger target. If the target is too small or indistinct, it’s near impossible to shoot with great consistency. To shoot 12-inch-or-less groups at 600 yards, a service rifle shooter is aiming at a black bullseye that’s 36-inches across—to be clearly visible in the sight picture at that distance. In addition to target size, the shape, color, and even ambient light conditions can affect the accuracy of iron sights.

In recent years, magnified optics have been allowed even in service rifle competition—overtaking the use of iron sights for serious competitors—but the fact that shooters can be surprisingly accurate with iron sights still holds.