Shotgun Review: Franchi’s Affinity 3 Is a Mid-Level Auto-Loader that Functions Like a Premium Shotgun

If you love inertia-driven shotguns, but don’t want to pay for a Benelli, the Affinity 3 is your next best option 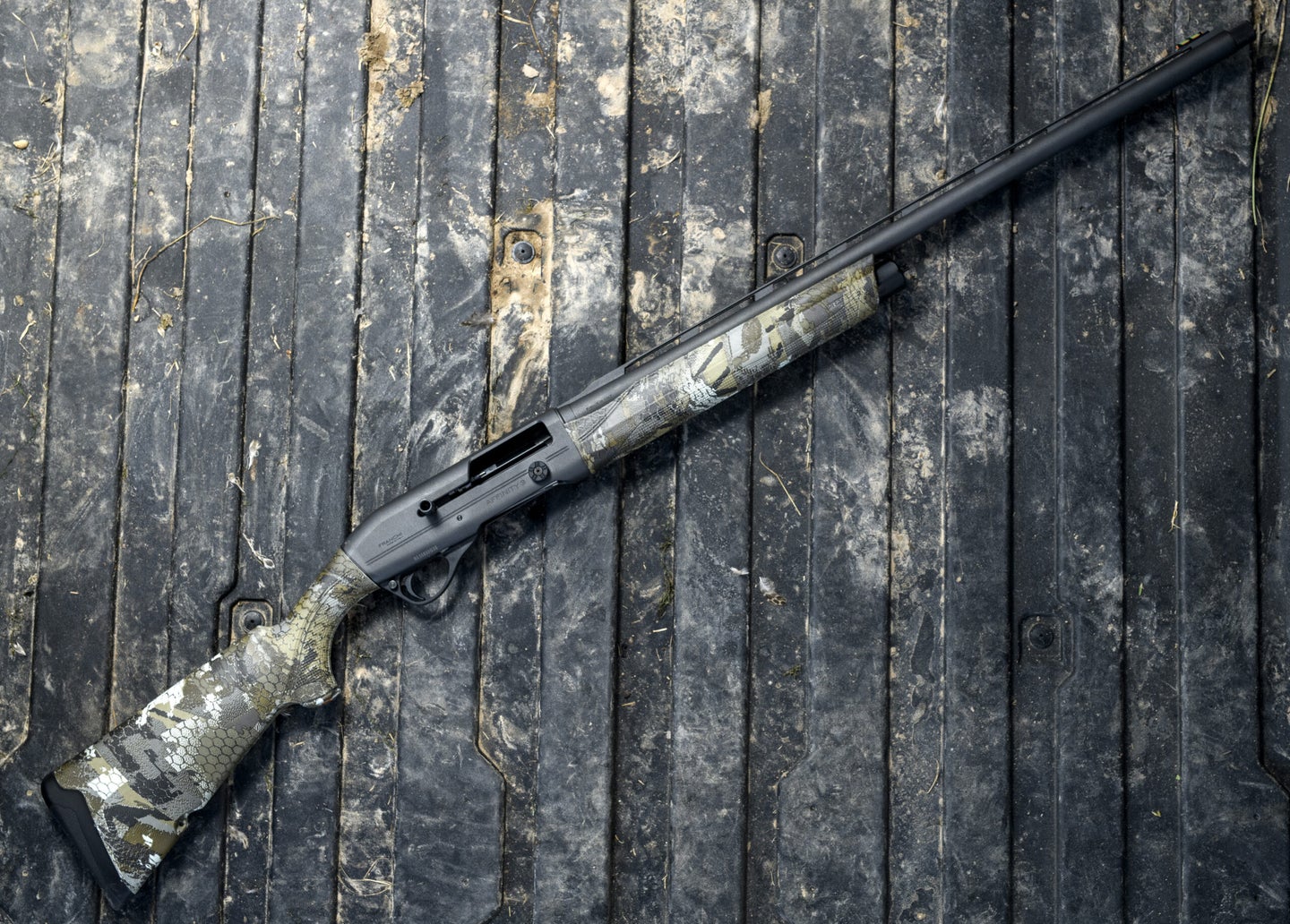 The Affinity 3 was the second Franchi auto-loader I ever shot. At least a decade prior, I had put my hands on the AL 48, a square-backed repeater with an operating system based on John Browning’s long-recoil Auto-5. It was an extremely light (under six pounds) and well-engineered shotgun. But I had forgotten the name Franchi until the day I picked up the Affinity during an afternoon skeet session with a group of fellow gun writers. After shooting a few rounds with it, I was impressed. The 12-gauge inertia-driven gun was light but had manageable recoil. It also never failed to cycle and pointed damn well.

Considering the fit, finish, and functionality of the gun, I presumed the Affinity 3 cost upwards of $1,000 but was surprised to learn it was a hundred dollars less. Franchis fall under the Benelli umbrella of brands (along with Stoeger, Uberti, and French gunmaker Chapuis). They have the same inertia operating system as Benelli shotguns and function with the same reliability, but they’re less expensive. The exterior of the black synthetic and camouflage Franchis are not on par with Benellis, but they have been plenty durable in my experience. Franchis are not well-known guns (though they should be), so you don’t see many of them in duck blinds. Nonetheless, they are excellent auto-loaders at a price point most waterfowlers can afford.

Putting the Franchi Affinity 3 to the Test

In September 2021 four editors, Colin Kearns and Phill Bourjaily of Field & Stream and Alex Robinson and myself from Outdoor Life, traveled to Pintail Hunting Club in Garwood, Texas, to test the Franchi Affinity 3 and 16 of the best duck hunting shotguns. Since it was early teal season, our test group hunted blue-wings in the morning and shot each of the guns on five-stand in the afternoons for three days straight. Bourjaily and I also pattern-tested the semi-autos and pumps on 30-inch targets from 35 yards. Normally, shotguns are patterned at 40 yards because that’s typically the distance most shotguns will struggle to print a pattern that will kill ducks. But 40 yards is also the extent to which most hunters are comfortable with a shotgun, so our team decided to pattern the guns at a more reasonable distance and settled on 35 yards.

During our test, each editor took note of how the shotguns handled as well as their craftsmanship, reliability, versatility, and overall value. We also tried to make each shotgun fail by loading them from different angles and shooting the guns from a variety of off-shoulder and imperfect mounting positions to see if they would malfunction.

The Affinity 3 is available in 20- and 12-gauge and in a variety of exterior finishes, including black synthetic, Mossy Oak Bottomland, Realtree Max-5, satin walnut, and a Cerakote barrel and receiver coupled with Max-5 or Optifade camo on the stock and fore-end. There is also a 3½-inch version of the Affinity as well as turkey, sporting, compact, and upland models, plus a women’s variant with a shortened stock and higher comb, called the Catalyst.

How Did the Franchi Affinity 3 Pattern?

Each 12-gauge shotgun was patterned from 35 yards with Federal Speed Shock No. 2s. The 3-inch shotshells carried a muzzle velocity of 1,550 fps and a shot charge of 1 1/8 ounces. The Affinity’s pattern was one of the best of the test guns, placing 124 of a possible 140 pellets (88 percent) inside the 30-inch circle. It shot 70 percent below and 30 percent above point of aim, leaving a small gap on the right side of the target. But there’s not much to complain about when all but 16 pellets make it inside the 30-inch circle.

Since Franchis are under the canopy of Benelli brands, you might assume they shoot like a Benelli. There are some similarities in the way the two brands handle. Franchis are light, sleek guns with slender fore-ends, just like a Benelli, so you can get them moving fast. The weight of a Franchi also makes it easier to carry afield. The pistol grip is skinny too. You can really get your shooting hand wrapped around it and feel solid when you bring the gun to your shoulder.

The difference I’ve found in shooting a Franchi versus a Benelli is in the pattern. Since I am a snap shooter, I like a gun that shoots exactly where I point it. I cover up ducks with my barrel, pull ahead of their beak, and pull the trigger to kill them. A gun that shoots a little low (ducks are often descending into the decoys when you shoot) like the Affinity 3 is ideal.

In our tests, the Super Black Eagle 3, M2, and Ethos Cordoba all shot high, which is typical of newer Benellis. To kill ducks or break targets with those three guns, you must hold the barrel below the bird, which is fine if that’s how you choose to shoot shotgun (many people do it this way). Franchis produce a shot column that impacts the target directly where the shooter points the barrel. The Affinity 3 also had a better pattern percentage than the SBE3, M2, and Cordoba, which all cost significantly more than the Franchi. I would also feel more confident hunting turkeys or deer with a Franchi because of its point of impact. You don’t want to use a high-shooting gun to kill gobblers or whitetails.

Recoil was a non-factor in the Affinity 3, which has a TSA recoil pad integrated into the end of buttstock. Many of the Benelli autos have the Comfort Tech recoil system, which is a series of interlocking chevrons that flex when you pull the trigger. I couldn’t tell any measurable difference in recoil between the SBE3 (which has Comfort Tech) and the Franchi (which does not).

The Fit and Finish of Franchi’s Affinity 3

There were no obtrusive transitions from the stock to receiver and receiver to fore-end in our test gun. Every semi-auto Franchi I’ve shot since the AL 48 has felt good in the hand. The Italians are detail-oriented gunmakers, and it’s clear the Affinity 3 was well designed.

Of course, Franchi makes mid-level shotguns so the exterior finish is not going to be to the level of a premium auto-loader. Our test gun did have a plastic feel to it, but Franchis will hold up to all the rigors of duck hunting.

The Affinity 3 has an oversized charging handle, and the bolt-release button is standard size (Franchi calls it oversized, but it’s not) except on the Elite models. Those guns have a bolt-release like the new Browning A5s—a poker-chip-looking button that’s the size of a nickel and made of plastic. The loading port is beveled so you can easily slide shotshells into the magazine.

Inertia guns are simple to field strip. Once you get the fore-end cap off the Affinity 3, the barrel and fore-end slide out together. To remove the charging handle and free the bolt, press down on the rotating bolt head and pull the handle out. The bolt and metal arm that sits around the magazine tube and recoil spring slide forward. To drop the trigger group, punch out the single pin that holds it in place, and you’re done.

Franchi’s Affinity 3 Is a Versatile Shotgun

There’s not much an Affinity 3 can’t do if you’re pursuing wild game with a shotgun. It’s light enough to carry all day on upland forays and the receiver is drilled and tapped for an optic for turkey and deer hunters who want to utilize a red-dot or scope.

There are aftermarket extended magazine tubes for the Affinity, which snow goose hunters will appreciate. Not all semi-autos at this low of a price point come with that option. The Affinity is available in a left-handed model as well, another rarity for mid-level auto-loaders.

Is the Franchi Affinity 3 Worth the Price Tag?

Franchis are among the most overlooked shotguns on the market. They don’t have the same name recognition as Benelli, but if you’re looking for a new inertia-driven auto-loader for under $1,000, there are few guns that compare to the Affinity 3. Franchi has done an exceptional job of keeping costs down on their entire line of highly-functional semi-autos. Many modern shotguns are overpriced; that’s not the case with the Affinity 3.

If you’re saving up for a Benelli, stop and consider spending the money you already have banked on a Franchi. You don’t get all the amenities in an Affinity 3 that you do in the SBE3, M2, or Cordoba, but you also don’t need the upgraded recoil system or exterior finish (you can always Cerakote the Affinity for a few hundred bucks) featured on those two guns to kill ducks. Simply put, Franchis function the way they’re supposed to; as duck hunters, we put that above all else in a shotgun. Because the last thing you want is a gun that won’t shoot when mallards are in the decoys.