I Took My Mother-in-Law to a Gun Range for Mother’s Day, and Lived to Write This Story

As experienced shooters, it’s up to us to provide more opportunities for those who want to learn to shoot…even if they’re our in-laws 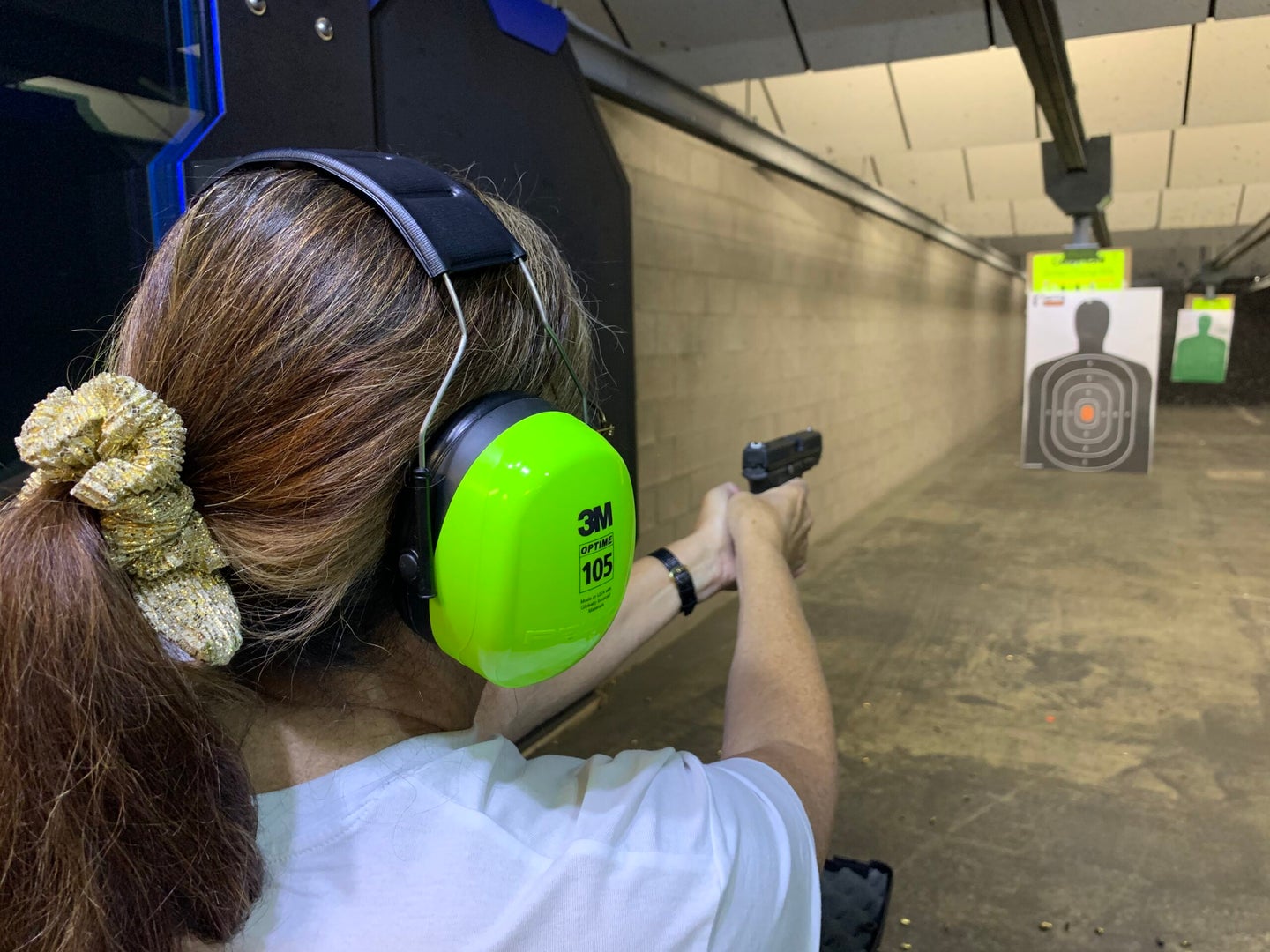 When you begin a story with “so my mother-in-law picks up a Glock 44,” it doesn’t typically end well. But in my case, it did. Because for Mother’s Day this year, I decided to take my mother-in-law and my wife to a gun range in the Arizona desert. It couldn’t have turned out better.

My mother-in-law and my wife are very different from me. They love belonging to a country club, shopping for nice clothes, and throwing extravagant parties for their friends. I shoot guns, hunt wild game, and own a wild-ass squirrel dog that never stops barking and digging holes in the backyard.

But those separate interests have served all of us very well over the years. We have taught and experienced things together that none of us would have ever known of had we not been in each other’s lives. For example, the reason I returned to hunting years after my father passed away was through a friendship my in-laws had with a life-long duck hunter. Without that connection, I never would have begun to hunt again or become an outdoor writer. And I have tried to return the favor with the small amount of skill I acquired growing up blue-collar, from showing them how to unclog drain pipes to replacing car batteries. So teaching my wife and mother-in-law something new—how to shoot—didn’t make me apprehensive at all.

My wife actually saw the gun range we ended up going to a few days before on our way to dinner and suggested the three of us go for Mother’s Day. I immediately envisioned telling my friends I took the two of them to a gun range and the looks on their faces, equal parts astonishment and something like “you dumb sonofabitch.” But I was actually excited that my wife wanted to surprise her mother with a trip to the gun range. It beat going to a department store or worse yet, a museum.

Many of us who shoot guns and hunt wild game do so because it’s a solitary pursuit. We enjoy being alone. Disappearing into the back 40 is something my wife doesn’t care to do. It’s just for me. Which I both need and love, and that arrangement has worked for us for years.

So why did I potentially jeopardize that future solidarity by taking my mother-in-law and wife shooting?

It’s a fairly simple answer. To not take them for fear of infringing on my hunting and shooting time would have been hypocritical. I’ve pounded the drum for bringing more folks of all backgrounds into hunting and shooing for a long time now. I also couldn’t deny two of the women that allow me to leave home each fall and hunt across North America the opportunity to learn to shoot a gun. And, they were excited to go, so I gladly took them.

Just Walking in Was Intimidating

Due to Covid-19, it had been more than a year since I had been to an indoor gun range. I forgot how intimidating it can be. There were muscle-bound dudes with bad buzz cuts, thick beards, and tattoos everywhere—I thought an impromptu CrossFit sesh was going to break out at any moment. Many of them were taking knees or laying prone on the carpet, and I spotted one guy using different pieces of furniture from the lobby as gun rests. I presume he was getting ready to finish last in his next PRS match.

Just getting the attention of the guy behind the counter took an alpha move on my part. They were all very engaged with the customers who were core shooters. And understandably so—it’s their job. Plus, gun folks gravitate to other gun folks. But if you are a newbie, it’s impossible to fit into that crowd or feel any sense of belonging. The guy who helped us was nice as can be, but I basically had to announce to him very loudly that we were here to claim our shooting lane. I felt like a dog marking its territory.

On the drive home, I asked my wife and mother-in-law what they would have done if they had gone to the range without me. Their answer? “We would have never gone.” The whole opening scene was chaotic to them. Try and put yourself in their shoes. You’re a first-time shooter and you walk into a room full of guys wearing too-tight cargo pants and Oakley sunglasses (indoors), rolling around on the floor. It’s a lot to take in.

Since we were on vacation, we had to rent our guns, which was fine, except the first gun was a semi-auto .22LR rifle that went click every other time one of us pulled the trigger. Even as a seasoned shooter, I get frustrated when guns jam. I could sense some of that disappointment—or just being unsure of what was going wrong—when my mother-in-law was trying to shoot the rifle and it continued to malfunction.

I knew to go find the range attendant and ask for help. And we simply came to the conclusion that the rifle was a piece of junk, and decided to trade it for a Glock 44. I didn’t want to teach either of them to shoot with a handgun because they seem to be more intimidating than a rimfire rifle, but it was our only option unless we wanted to move up to a centerfire load. I didn’t think they were ready for an AR-15—there were no bolt guns to rent—so we stuck with the rimfire pistol.

If you have never been in a situation like that it’s hard to know what to do. The easy thing, and the route I presume most folks take, is to quit. Which is no good, because it leaves you with a bad experience. You might never try again. That’s unfortunate, because we all ended up having a great time once I swapped guns.

How Did They Do?

My mother-in-law and I get along, so I knew teaching her wouldn’t be problematic. She is also a very inquisitive and attentive person, which made my job easy. For example, she reads instruction manuals cover-to-cover to figure out how to work anything mechanical. She wants to know all the information she can.

My wife is not like that, but she’s extremely amenable when she is learning something new. So it came as no surprise to me that they both listened and followed all of my instructions intently. And most shooting instructors will tell you that women make great students, because unlike most men, they don’t think they already know everything about everything. That was the case with my wife and mother-in-law.

Before we got to shooting, I started off with proper handgun safety, emphasizing that the barrel of a handgun is much shorter than a rifle or shotgun, so it’s very easy to accidentally point the muzzle in an unsafe direction. For their first shot, I simply loaded one bullet in the magazine, let them close the slide so I was never handing either of them a loaded gun, and fire at a paper target 5 yards away.

We then moved on to three cartridges in the mag, and finally a full magazine. They both shot well for beginners. My wife in particular had some tight groups, which was awesome considering it was the first time in more than 15 years she had shot a gun. My mother-in-law was very considerate with each of her shots. She would take long pauses in between each trigger pull, trying to make the best shot she could. It was almost like she knew how expensive ammunition is right now and appreciated shooting every single round.

I tried my best to set them up for success, which is why we only shot at a paper target 5 yards away. Being accurate without a red dot on a handgun is tough, especially for new shooters. And since we were shooting open sights, I kept the target close. That also allowed them to see where the bullets were impacting. I don’t think we had a single round shoot off paper—a win in my book. And by the end they were both hitting the target in the general area they were aiming. Which is all the accuracy you can ask for from new shooters.

Read Next: How I Introduced My City Kid to His First Hunting Gun

Is Teaching Your Mother-in-Law to Shoot Actually a Good Idea?

Once again, I thought about all my hunting buddy’s reacting to me telling them I took my mother-in-law shooting at the gun range. “Dumbass. Idiot. Moron.” Those are all words I am prepared to hear if any of them ever read this article. Luckily, most of my hunting buddies are still reading at a third-grade level, so I am probably in the clear.

But yes, it is smart to teach your mother-in-law, and anyone close to you, how to properly handle and shoot a gun. The first reason is that if you have guns in your home, the people who spend the most time inside your house should know how to keep guns pointed in a safe direction, load, and unload them. In my case, I know it gave my wife and mother-in-law a better appreciation and understanding of why shooting and hunting is important to me, and also how seriously I take gun safety. And if you do it right, whoever you take shooting is going to have a good experience once you convey how dangerous it is to improperly handle a gun, but also how easy it is to safely handle a gun.

I think if more folks are given the chance to shoot at a gun range, they will take it. Those of us with the experience just have to keep providing the opportunities. My mother-in-law is a perfect example. She can’t wait to shoot again. And I will be more than happy to take her.