A Lighter, More Consistent Shotgun Trigger Pull Can Make You a Better Shot

Most shotgun shooters don’t give the weight of their trigger much consideration. Here's why you should start paying attention 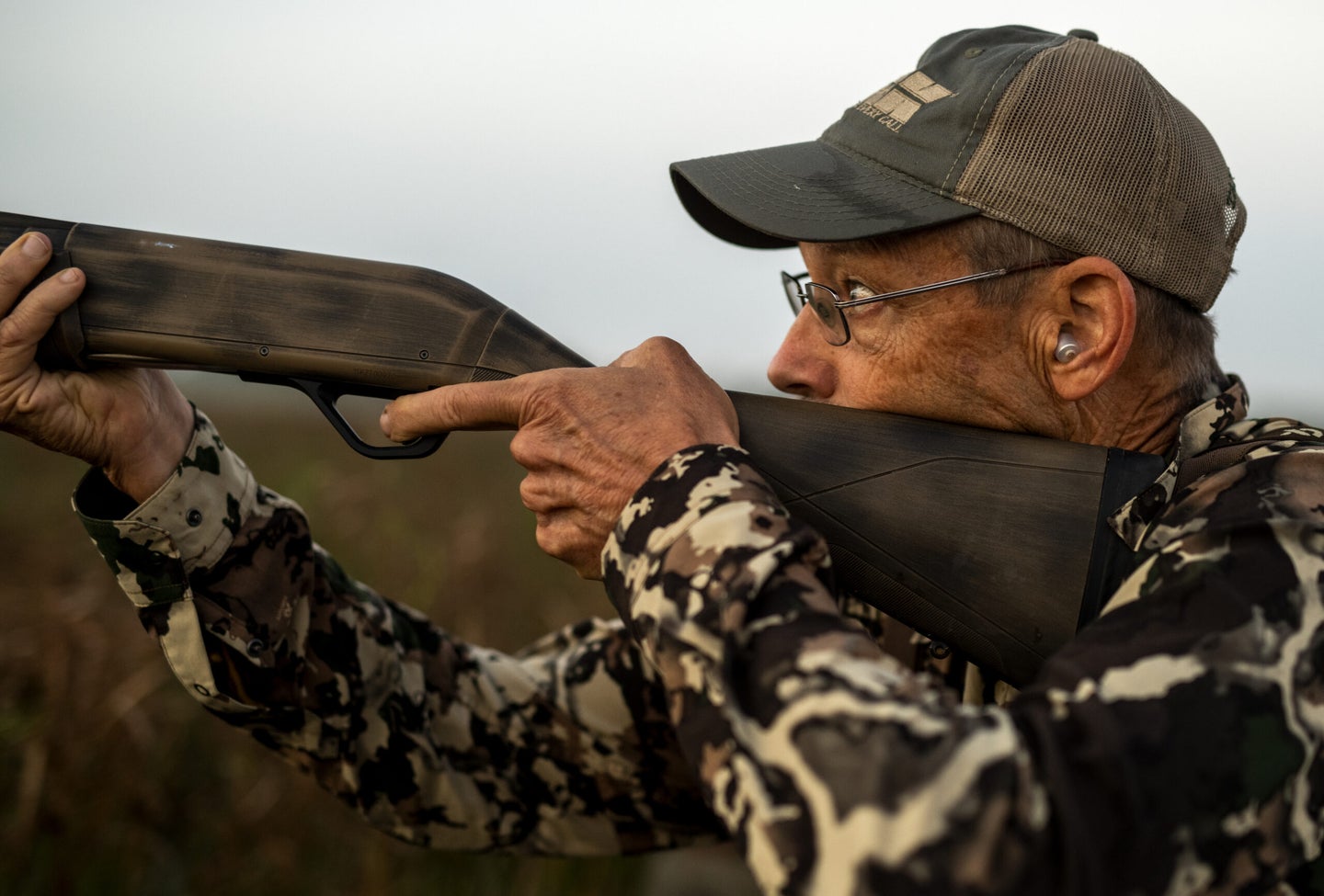 Like many of you, when I began shooting a shotgun, my father told me to “slap that trigger” whenever a dove or duck flew in front of my barrel. My dad was simply passing down to me the lessons his father had taught to him. But that one was wrong. To shoot a shotgun more accurately, particularly if you are hunting turkeys or deer, or you’re a clay-target enthusiast, your trigger pulls need to be more controlled. One thing that helps? A light shotgun trigger that exhibits very little creep.

Many stock shotgun triggers are heavier than the ideal trigger weight of 3½ to 3¾ pounds (break-actions with double triggers should have a 4-pound front trigger weight and 4½-pound rear trigger weight). Manufacturers often put more weight in their triggers so buyers aren’t surprised by a light pull the first time they click a gun off safe. A heavier trigger takes more effort to pull, thus is thought to be safer, even though the shooter won’t be as precise. For as little as $100, a gunsmith can reduce the weight of your shotgun’s trigger pull. This will improve your capability with a shotgun and keep your point-of-aim on target with more consistency.

There are digital and old school spring-operated scales that will tell you how heavy the trigger pull of your shotgun is. Make sure your gun is unloaded, take it off safe, and place the hook or small metal bar from the scale on the trigger. Pull backward until the trigger releases the hammer—the scale will register a pull weight. I consider any trigger pull over 4½ pounds to be heavy and in need of adjustment. But trigger weights are subjective. What feels heavy to me may feel light to you. So, talk to your gunsmith before making any changes.

Also note how much travel your trigger allows. Travel, or creep, is the amount the trigger moves backward before it releases the hammer. Too much will make you less accurate because the gun is not firing at the exact moment you want it to. Timing is critical to shooting a shotgun well, and extensive creep will disrupt that timing.

Properly choked, hunters can slap their shotgun’s trigger when ducks are in the decoys or a covey of quail explodes from cover five yards in front of them. But some shooting disciplines require more precision (which I will cover later) that no choke constriction can overcome. Shotgun shooters don’t need to be as controlled with their triggers as a rifle shooter, but the pull should be a smooth one, which requires a light trigger weight.

“Most hunters can get away with a trigger slap because their shots are at a reasonable distance and the pattern is wide,” said Rob Roberts of Rob Roberts Custom Gunworks. “But when you’re shooting a turkey or a clay at distance, slapping that trigger can cause you to be off the mark, especially if the trigger pull is heavy.”

How a Gunsmith Reduces the Weight of Your Shotgun Trigger

In most shotguns, a small spring connects the trigger with a sear that releases the hammer when the trigger is pulled. The hammer sends the firing pin forward into the primer of the shotshell (and you know what happens next). The tension of that connector spring, along with the slickness of the sear’s metal surface (which holds the hammer in place) determines the creep in your trigger and the weight of its pull.

To take creep and weight out of the factory trigger, a gunsmith can replace the connector spring with a more finely tuned aftermarket trigger. The sear will also be cut and polished. This makes the sear’s engagement with the hammer mechanism more refined. Essentially two rough surfaces become slick, and that also reduces your trigger pull. But if the sear is polished or ground too much, the trigger will become dangerously light. That’s why only a qualified  gunsmith should perform this procedure.

Most gas-operated shotguns can have lighter trigger weights than inertia guns because they don’t recoil as much, which makes it easier for shooters to have proper trigger-finger discipline. Inertia guns operate on the recoil a shotshell produces when fired. Because the guns use recoil to reset the trigger it can be very easy for a shooter to unknowingly keep a finger on the trigger after it has been reset. If the pull weight is too light, that can cause a second shot to go off accidentally, which is obviously unsafe.

“We try to get the majority of the creep out of the [trigger],” said Roberts. “Some guns, like a Benelli, you can’t take the full creep out of because the gun functions off inertia. If you take too much creep out of it, the gun will start double firing.”

I own a gas-operated Winchester Super X4, on which Roberts reduced the trigger weight. Its average pull is right around 3 pounds, which is light for a smoothbore. The first time I shot it on the skeet range it did surprise me at how little travel was in the trigger. It wasn’t problematic or dangerous because I was ready for a quick shotshell discharge after having dry-fired the SX4 at home. But I immediately understood why having that light of a trigger in an inertia gun could be dangerous. Because during a hunt, my focus is more on killing what’s in front of me, not whether my finger is still on the trigger a split second after the gun fires.

“The recoil in an inertia gun is going to set you back a bit, and your finger is gonna move,” Roberts said. “If you’re perfect with your finger, then you will be fine, but not all of us are, especially if you hunt with gloves. Even with a thin pair of gloves, like if you were turkey hunting, it’s going to be much harder to control the trigger.”

There Is a Way to Reduce Trigger Weight on Your Own

If you own a Remington 870, 11-87, or 1100, Timney Triggers makes a trigger fix you can safely install on your own—no gunsmith needed. Timney sends you a sear, three springs for two-, three-, and four-pound pull weights, and an Allen wrench to adjust the spring tension, which will lighten or increase trigger weight depending on which way you turn it. All you need do is drop the trigger group out of the gun, remove the old spring and sear, and replace it with the Timney kit.

“When you start using a shotgun more like a rifle for turkey hunting and deer hunting, then having a trigger that breaks the same way every time, that has a crisp pull, a lighter pull, that makes a lot of sense, says Chris Ellis of Timney Triggers. “Our 870 sear kit allows you to become more accurate with that platform. It allows you to drop the poundage down to 1½ to 4 pounds.”

Through years of extensive testing, the late Bob Brister, former shooting editor for Field & Stream, found that a light trigger pull made shooters less recoil sensitive. Brister dedicated a lot of hours to shooting shotguns, and at times he developed a flinch. To negate that, he simply stopped shooting for a few days. But if the flinching persisted, he would shoot a gun with a light trigger pull, because with a light trigger, he didn’t have as much time to anticipate recoil.

“There are two entirely different forms of flinching,” Brister wrote in his book Shotgunning: The Art and the Science. “One we’ll refer to as rifleman’s flinch, although it applies to shotguns as well. It is the sort of flinch most shooters immediately think about when the term is used, because they have at one time, or another flinched off with a rifle or handgun in anticipation of recoil. Making a trigger light and crisp can greatly reduce this tendency, which is why few competitive riflemen or shotgunners use a heavy or creepy trigger.”

When Do Lighter Triggers Matter?

Most seasoned turkey hunters want a light trigger in their shotgun. The same goes for whitetail hunters in states with shotgun-only seasons. The reason? A lighter trigger makes your gun more accurate. The less you have to pull on your trigger to make the gun fire, the less chance there is that gun will move before the payload or slug exits the barrel. Heavy trigger pulls can cause errant shots when aiming a shotgun like a rifle.

“If you are a right-handed shooter and your gun’s trigger weight is too heavy, it can make the gun pull to the right as you fire it,” Roberts said. “A turkey pattern isn’t that wide, especially at close range, which is one of the reasons you will see hunters miss turkeys. That heavy trigger weight may cause the gun to move.”

Trap shooters like to have a lighter trigger pull because the birds are flying straight away from them in most presentations. Just like in turkey of deer hunting, a slight movement of the gun right or left can result in a dropped target.

I’ve found a lighter trigger to be beneficial on straight-away shots and doubles in American skeet. Because targets are flying directly overhead on stations 1 and 7, it can be easy to pull off the clay bird if you’re shooting a heavy trigger. And a light, smooth pull makes it easier to transition from one target to the next on doubles.

A light trigger pull is also beneficial when shooting at distance on sporting clays. The farther a clay is away from your position, the more precise you must be with lead. If a trigger is heavy, it can pull you off the target, which will absolutely kill any chance you have of breaking a crosser at 50 yards.

“Competition clay shooters are really into lighter trigger weights,” Roberts said. “They know any little thing that can increase their accuracy is going to give them an edge. But a good trigger job can help your average hunter too. Most guys don’t even think about it, but you’re going to be a better shot with a light, consistent trigger pull.”