After a short hiatus, Benelli brought the Cordoba back. Now, it’s more durable and versatile than ever 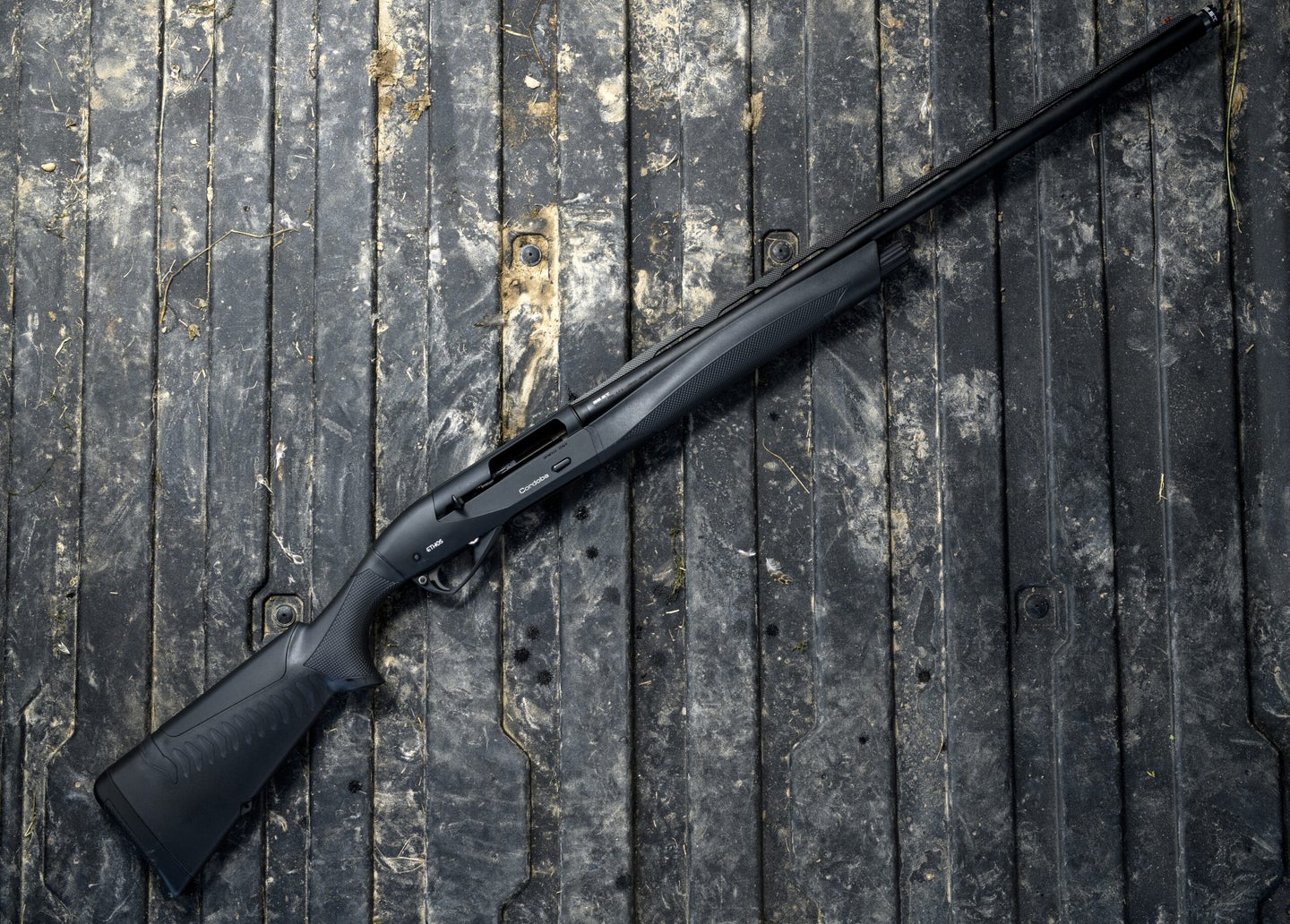 The Benelli ETHOS Cordoba BE.S.T. was designed for hunters that are hard on shotguns and like to shoot a lot. Benelli built the Cordoba—named after the region of Argentina known for its high-volume dove shooting—to accommodate hunters who enjoy clay-shooting disciplines and aspire to hunt birds abroad one day. To do that, Benelli was very detail-oriented in the construction of this gun, which was previously known simply as the “Cordoba” before the Italians discontinued it for a short time and brought it back in the current ETHOS model. The upgrades to the new version of the gun are small, but they also make this semi-auto a smart choice for a duck hunter looking for a premium shotgun that can transition seamlessly to the clays course, uplands, or a bucket-list dove-hunting trip to South America.

How We Tested the Benelli ETHOS Cordoba BE.S.T.

To see how the Cordoba performed in the field and on the range, four editors—Colin Kearns and Phil Bourjaily (Field & Stream) and Alex Robinson and myself (Outdoor Life)—took it and 16 other duck hunting shotguns to Pintail Hunting Club in Garwood, Texas, during the 2021 early teal season. For three days, we shot ducks in the morning and five-stand in the afternoon. Bourjaily and I also patterned all 17 shotguns on a 30-inch target from 35 yards. The standard way to pattern a shotgun is from 40 yards, but we wanted hunters to see how the shotguns patterned from a more realistic yardage as 40 is on the edge of the average duck hunters’ range with a shotgun.

Each editor considered five different categories while testing the 17 shotguns, including how the gun handled and its ergonomics, workmanship and aesthetics, versatility, reliability, and value. All of us tried to make the guns fail throughout the three days of testing, loading the guns at different angles and shooting them from multiple mounting positions, all things that occur while you’re duck hunting.

The Cordoba is Benelli’s first 28-gauge shotgun and is also offered in 20- and 12-gauge (our test model). It is only available in Benelli’s BE.S.T. finish, a high-tech coating that is a hybrid of Physical Vapor Deposition and Plasma Enhanced Chemical Vapor Deposition. Essentially, Benelli figured out how to combine a few existing vapor technologies and apply them to shotgun components at low temperature, instead of the extremely high temperatures typically required, which would destroy barrel accuracy. BE.S.T is used on the barrel, barrel extension, bolt, bolt handle, extended chokes, safety, stud slings, trigger, and trigger pin. Benelli guarantees the treatment with a 25-year warranty.

We patterned our test gun with Federal Speed Shok 3-inch, No. 2s with a muzzle velocity of 1,550 fps and a charge weight of 1 1/8 ounces.

You can see that the 12-gauge patterned 100 percent above point-of-aim. But it also put 115 of 140 pellets (82 percent) inside the target. New Benellis, starting with the debut of the Super Black Eagle 3 in 2017, typically shoot high, and the Cordoba was no exception. Both Bourjaily and I noticed that to kill a teal or break a clay target consistently with this gun, you needed a solid mount tight to your cheek, so that your eye remained close to the rib. We also held below the bird, so it was floating above the bead. If you lazily mount this gun, and don’t get a good sight picture, you will shoot over the target. For pass through shooters who cover up a bird to kill it, you will want to adjust drop and cast to try and bring that pattern down. If you like to see the bird above your barrel, the Cordoba is ideal straight out of the box.

The Cordoba Is a Fast-Handling Shotgun

The fit and feel of the Cordoba is much like that of the Super Black Eagle 3, and since both guns were a part of the test, I made it a point to shoot them back-to-back on five-stand one afternoon. Since the SBE3 is a 3½-inch gun, it’s about a half-pound heavier than the 3-inch Cordoba, which makes the latter easier to get moving quickly. But the Cordoba is also whippy due to its light weight, which makes it difficult to keep the gun moving. The lighter weight Cordoba was effective on close-range shots because I didn’t have to move the gun much and could do so with speed. But on longer targets that required continuous lead, my accuracy suffered because it is hard to keep such a dainty gun swinging through the clay.

The Cordoba is a slender gun, like all Benelli auto-loaders are. It combines the same fore-end contours of the SBE3 with the rounded action of an M2. I shot the Cordoba well when I held below the target. But if I tried to cover the bird (which is how I prefer to shoot ducks), it was a clean miss every time. Pass-through shooters will feel like they are holding a foot or more below the bird to make a clean break or kill a duck. It will be even more tricky on falling targets, like when a mallard drops into the decoys. For those shots, you will be aiming below a greenhead’s outstretched webbed feet to dispatch it.

Recoil on the Cordoba was manageable for me (I am 6-foot-4, 275 pounds), but smaller shooters may not enjoy the kick this lightweight Benelli delivers from 1 1/8-ounce loads. A 6½-pound inertia gun is going to produce recoil no matter how you try to tame it, which Benelli tried to do with a ported barrel. The Comfort Tech 3 stock also uses interlocking chevrons to mitigate some of that unpleasantness, but you will walk away feeling the effects of recoil on your shoulder after running through a box of 3-inch magnum duck loads with the Cordoba. The good news is it cycles 1-ounce loads reliably (some 12-gauge inertia guns won’t). The smaller shot charge will make shooting the Cordoba more enjoyable. And I have shot plenty of 7/8-ounce shotshells through the M2 20-gauge, which uses the same Comfort Tech system as the Cordoba, with no ill effects. So, if you decide to buy the Cordoba in 20- or 28-gauge, neither gun will thump you too badly.

The exterior and inertia operating system of this gun are nearly flawless. Benelli’s BE.S.T coating adds durability to the Cordoba, which you do pay for. There is a $400 difference in price between a standard SBE3 and the BE.S.T. version (the Cordoba only comes with the BE.S.T finish, so there is no standard model to compare it to). You also get five extended chokes with this gun, which gives you the ability to fine-tune pattern-density with your favorite shotshells without having to buy a custom choke.

A beveled loading port ensures that you don’t pinch your thumb while stuffing shells into the magazine—which matters in the dove fields of Argentina when you’re shooting cases of ammo—and there is also a cut out in the bottom of the trigger guard that acts as a guide as you load. You don’t need that feature to load you’re gun of course, but the fact that Benelli made such a small enhancement shows how much thought went into the details of the Cordoba. An oversized bolt-release button makes the 12-gauge easier to operate even if you’re wearing gloves. The bolt handle is the only amenity that needs an upgrade. It’s a standard handle, and for a such a versatile, expensive gun, the rounded handle you get with Benelli’s Performance Shop shotguns would be a better option. There’s also a small “window” that runs the length of the fore-end so you can see how many shells remain in the magazine. It was built into the old Cordoba as well, and it could be considered valuable on Argentina dove shoots, but not in any hunting scenario where a shotgun plug is required.

None of the editors experienced a malfunction with the Cordoba over the three-day test. Benelli has updated its rotating bolthead by inserting a spring-and-ball detent system to ensure the bolt locks the shotshell into battery every time. Previously, the bolthead would—at times—not close all the way. For example, if you loaded a shell into the action, pressed the bolt-release button, but then held onto the bolt handle with your hand and slid it forward to make less noise, the shell could remain out of battery. All the editors tried to make the new system fail but it reliably pushed the shell forward into its proper position no matter how slow or lightly we brought the gun to our shoulders.

Most wingshooters enjoy clay-shooting sports, but not all repeaters are dual-purpose guns. Of course, you can shoot a heavy pump or camo-clad shotgun on sporting clays, but those firearms aren’t truly built for it. The Cordoba’s inertia-driven operating system and exterior finish make it ultra-durable in any environment, plus it can cycle lighter target loads, and was built for volume shooting. That makes it a great option for shooters who spend time afield and at the range.

Is the Benelli ETHOS Cordoba Worth the Price?

This gun caters to a specific clientele that’s willing to pay a premium price for a versatile shotgun that is durable enough to last a lifetime and then some. It’s a niche shotgun that won’t make sense for a lot of core duck hunters. But if you like to hunt multiple species with a shotgun, there are few production auto-loaders being made today that are as well thought out as the Cordoba. The BE.S.T coating does make the gun more expensive. Without it, this is a $1,900 semi-auto; more in line with what you’re going to pay for a new Benelli. But you also get a 25-year warranty on all the parts treated with the coating. It’s a high price to pay for a shotgun, but the days of $700 steel and walnut repeaters are behind us.

Duck hunters who participate in other wingshooting pursuits and clays will enjoy the Cordoba. But, it’s not a dedicated duck gun, though it can serve as one, especially since the BE.S.T. coating makes the exterior less susceptible to the elements and the hell duck hunters put their shotguns through. It’s really a matter of deciding if the price tag is worth it for you. If you want to buy new, and want a gun that always functions, you’re going to have to pay. And if that’s the route you choose, there are few options better than an Italian auto-loader with a bomb-proof finish applied to it.