7 Hacks to Keep Your Trail Cams From Getting Stolen 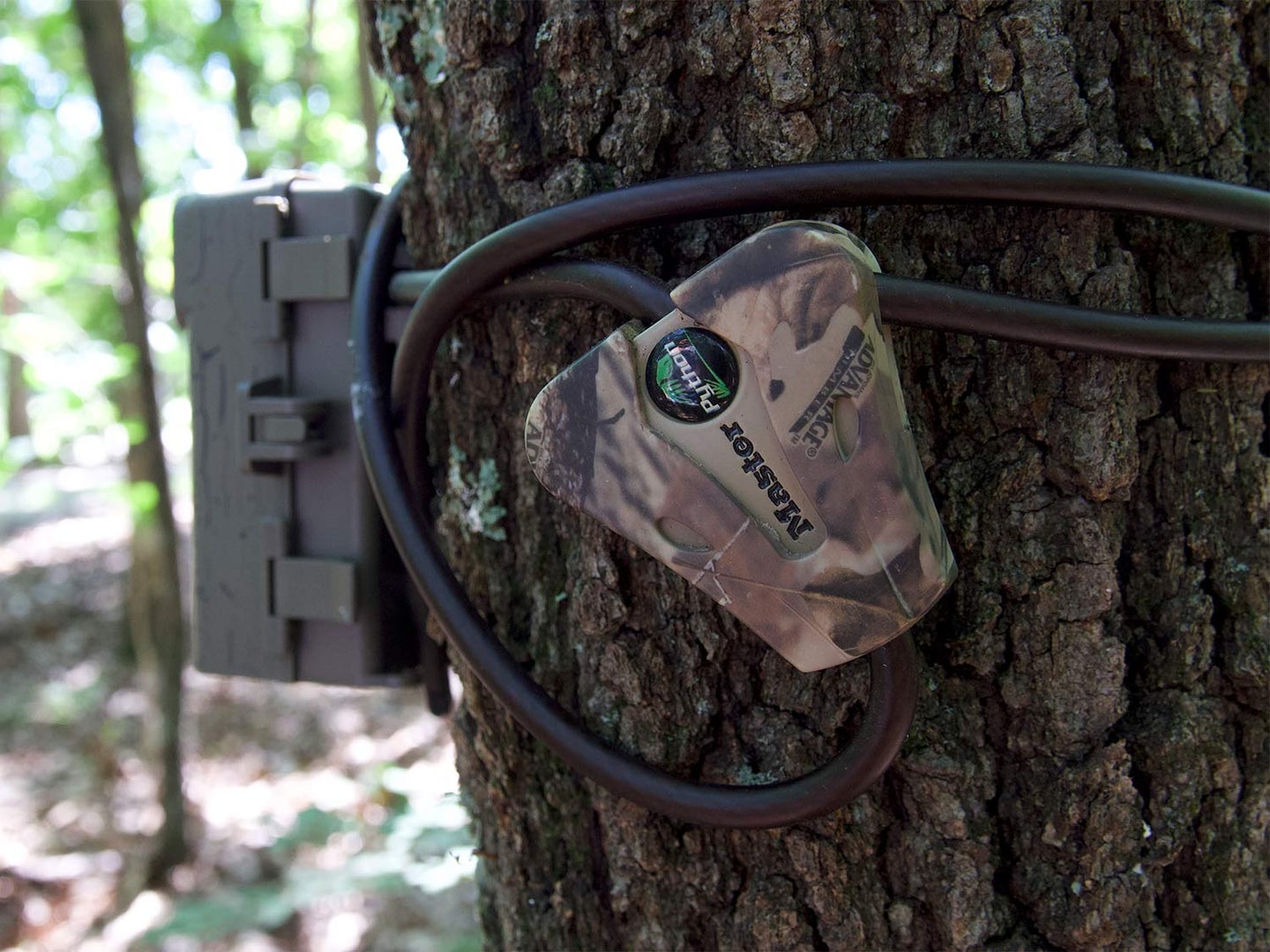 If you hunt long enough you will most likely encounter some issues along the way with gear turning up missing. I’m not referring to putting something away in a place you forget about kind of missing either. I’m talking about other people stealing your stuff in the woods. Unfortunately, gear theft is an ugly reality hunters must come to terms with. One of the most popular victims seems to be trail cameras.

To provide diverse perspectives, I reached out to some friends and notable hunters in their own right, to include hacks they’ve developed over the years to prevent their cameras from growing legs and walking away. The good news is it typically doesn’t take much to deter a thief, but taking some preventative measures certainly helps keep your gear where it belongs; in your possession.

I’m a big fan of Python or cable locks for trail cameras. The benefit to a Python or cable-style lock compared to something like a chain lock, is they are usually more flexible and form-fitting to the tree regardless of shape. They also cinch the camera tighter to the tree for a more secure hold, making it more difficult to fit cutters or other tools around the cable.

2. Hang Just Out of Reach

Aaron Warbritton of The Hunting Public uses a technique I’ve exercised many times myself, which is putting trail cameras and portable stands out of physical reach of potential thieves.

“Trail cameras seem to be a common piece of equipment that gets stolen,” said Warbritton. “To combat it, we bring climbing sticks and hang our cameras around 8-10 feet high in a tree angling downward. This way, a person can only reach it with a climbing stick. Then we’ll throw a bike lock or something on it as added insurance. Since it’s well out of natural sightline, it’s also well-hidden at that height.

“Write your name, number and any other pertinent info on your gear as well. I like to keep track of serial numbers on cameras so law enforcement can identify them in the event they’re found at a later date.”

If you have a little extra money or old trail cameras that have stopped working you can try the decoy approach. Whitetail Properties Land Specialist, Stephen Stockman of Missouri has had good luck getting rid of thieves in the past by placing a non-functioning trail camera in the open, then using a working trail camera positioned so it captures any movement around the “decoy camera.”

“I’ve had good luck putting a camera in plain sight and a camera more concealed a little ways from it pointing back at it,” says Stockman. “I actually got a picture of a guy and his girlfriend stealing the camera in plain sight. They never noticed the hidden camera, and they were caught. It’s a little more leg work and uses more equipment, but using an older trail camera as the decoy helps. I’m sure to put my name, address, and phone number on my equipment as well so everything can be clearly identified as my property.”

4. Utilize the Power of Social Media

When it comes to thieves and his gear, Stockman likes to utilize the power of communication and networking to track down stolen cameras and caution any future trespassers and thieves.

“I had a few trail cameras and stands stolen from a property I had permission to hunt,” says Stockman. “A little later, I luckily got pictures of them on a camera that they had missed. I simply made a post on Facebook with identifiable pictures saying that I had my stuff stolen and if it was returned to the sheriff’s office within 24 hours, I wouldn’t press charges. It actually worked like a charm. Within five hours, my items were returned, and that was that.”

“The nice thing about social media these days is people are pretty willing to help others out. It’s amazing how quickly a vehicle or person can be identified from a picture. I feel like seeing more of this kind of networking between honest hunters shows that properties are being watched more closely than ever. Hopefully, it continues to be a better tool to help keep people off of property they shouldn’t be on.”

Read Next: 5 Tips for Getting Better Trail Camera Pictures

When it comes to making both trail cameras and treestands hard to find, I love using evergreen trees. For treestand setups they provide great concealment while hunting, but they also do a nice job of making stands difficult to see since the limbs often stick out further than the platform, breaking up the silhouette of the stand. I like to cut little holes in the boughs to place cameras against the trunk as well. From a distance, the trunk is shadowed by the surrounding limbs making a camera difficult to see. They also do a great job of hiding the straps that often give away a trail camera’s location.

A little glue can go a long way to help break up the shape of a trail camera on a tree and help it blend into the surroundings better. I like to use fake leaves and moss that can be purchased inexpensively online or in the decoration section at Walmart. Attach the leaves and moss in a way that breaks up the solid color and rigid shape of the camera body.

Arguably the most noticeable giveaway of trail camera’s location is the infamous black straps. The black straps seem to contrast against the bark of just about any tree causing them to be obvious at eye level from any direction. To combat the contrast, I like to give straps a custom camo makeover by spray painting them with a mixture of earth tone colors. It’s even better if you can get your hands on the right sized camo strap so you don’t add a foreign paint odor to your gear that could potentially deter game.

It may seem inconsequential, but putting your name and contact information on your gear can be the difference between keeping it or losing it forever. Mark Kenyon of the Wired to Hunt Podcast and MeatEater Inc. has labeled his trail cameras for years, and it’s paid off.

“I like to use a knife or screwdriver to etch my name and phone number into the plastic camera body with the hope if someone came across it or came to possess it, they’d return it, rather than keep it,” says Kenyon. “A few years ago, I had a trail camera stolen off a property I hunt in southern Michigan. A few weeks later, I got a phone call from a Cabela’s location about an hour away. The customer service representative on the phone said he had my camera. I couldn’t believe it. Whoever stole my camera brought it to Cabela’s and returned it for cash or in-store credit. Only after receiving the camera as a return did someone at the store realize that it had my information on the back and that it was obviously stolen. Cabela’s ended up mailing it back to me, and I still have the camera today.”

Read Next: Basic Features You Need in a Trail Camera

Cellular cameras that can send trail camera images directly to your phone through a data plan are increasing in popularity by leaps and bounds. They can be incredibly addicting to stay posted on which deer are consistently using your hunting area and when new deer show up. The additional cost to your data plan and wireless cameras themselves are certainly more of an investment. Dan Johnson of the Nine Finger Chronicles Podcast hopes they’ll help him identify some thieves he’s been trying to catch red-handed for the last few seasons.

“The last three years I have had seven trail cameras and one treestand stolen from the same farm,” says Johnson. “I have been in contact with the county sheriff and the DNR officer that handles the area. I have also talked with other hunters in the neighborhood as well as landowners who have neighboring properties. I have implemented locks, cables, and cell cameras to try and prevent any more theft. My goal is to try and use a couple of cell cameras to catch them actually in the act of the theft. Then even if they steal the camera, I will have solid evidence.”