Stephen Tyson Jr. hooked a giant striper during his bass tournament. Could it have been a record? 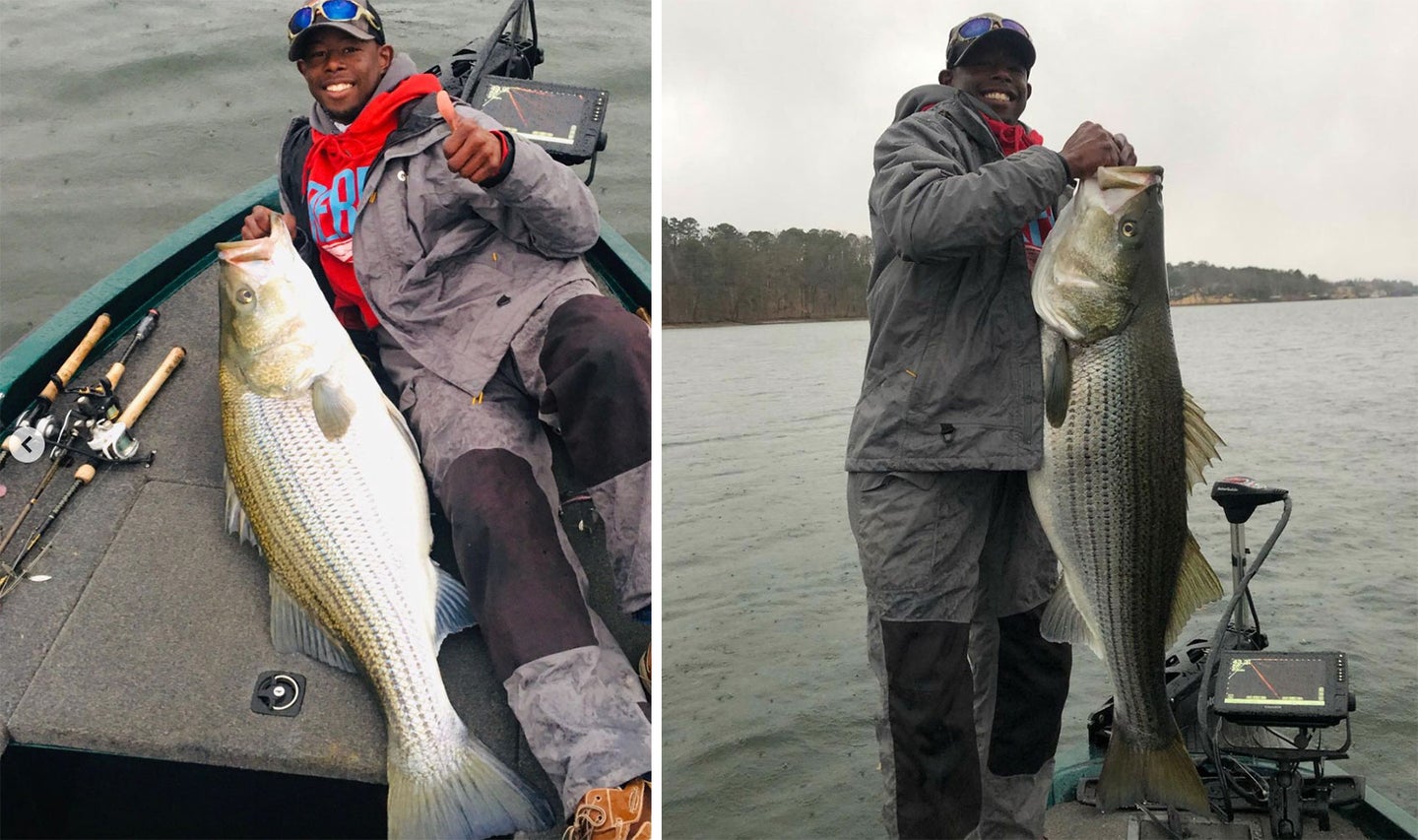 “I was practicing for a [largemouth bass] tournament and found a great spot holding a bunch of bass the day before the event,” says Tyson. “My fishing partner and I hustled to the spot first thing on tournament morning, and on my fourth cast I hooked a fish that was a whole lot bigger and stronger than a largemouth bass.”

Tyson was using a Garmin LiveScope sonar unit and noticed a huge mark on its monitor indicating a fish halfway to the bottom in 14 feet of water. He threw a crankbait toward the mark, reeled the lure down, and watched the mark on his sonar move up to slam the lure.

“At first I thought it was a big largemouth because I’d caught an eight-pounder there the previous day,” says Tyson. “But the fish made a hard run that actually turned the boat. I knew right there it was a whole different kind of fish, like a striper or catfish. I told my boat partner Philip James that I was gonna break it off because fighting it was taking too much time out of my tournament day.”

But James insisted Tyson should fight the fish to the boat just to see what species he had on, and to simply enjoy the battle. Tyson was fishing with 10-pound test line.

Twenty minutes later, Tyson and his partner could see that it was a massive striped bass. The striper was so huge they thought it might be a state or lake record. As the tired fish made a close pass, Tyson grabbed it by the lower jaw and quickly swung it into the boat.

“We were amazed how big it was,” Tyson says. “I knew we had to get it back into the water fast to keep it alive, but we took a couple photos and shot a video releasing it.”

Read Next: Two 14-Pound Bass Kick off the 2022 ShareLunker Season in Texas

Tyson has caught heavy catfish weighing up to 50 pounds, and says the big striper he held easily weighed more than that. The precise weight and measurements of his striper are unknown, because Tyson released the fish and went back to searching for largemouths for his tournament. He finished mid-field in about 160 boats.

Tyson knew he couldn’t keep the striper alive for weighing and measuring after the tournament because he didn’t have the space in his livewell. But he says he’ll be back on Lake Hamilton to take another shot at catching a record-breaking fish.

“I’m definitely going back to Lake Hamilton for stripers,” he says. “I marked a school of about 20 big fish that day I’m sure were striped bass, old and big ones. Some may be heavy enough to break the lake or state record for the species.”

The Arkansas state record for striped bass is 64 pounds, 8 ounces, caught by Jeff Fletcher at Beaver Lake Tailwater in 2000.