How To Ice Fish Without Dying 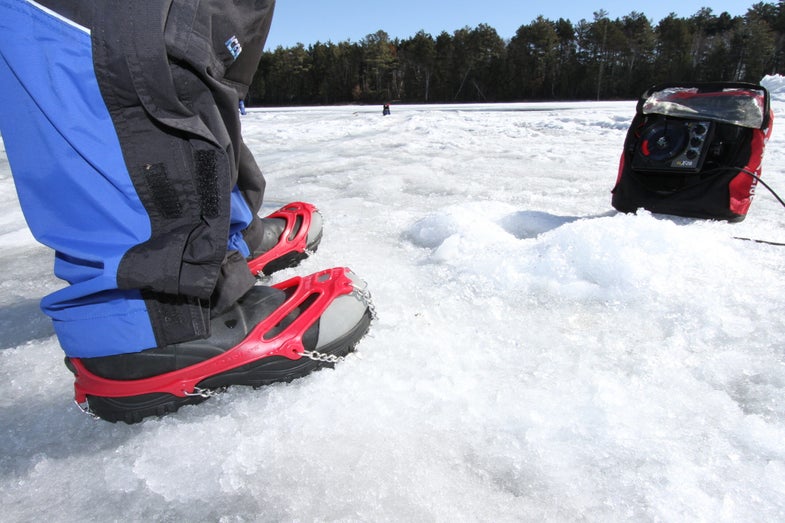 Stay safe on the ice. David A. Brown
SHARE

Fishing is a contact sport and that means pokes, cuts and bruises are a slightly bitter part of the pleasant memories. Ice fishing, however, presents a handful of particular hazards that hard water fishermen should consider.

Breaking through the ice is the worst-case scenario, but not just when fishing first and last ice. Even well into the season when ice can be a foot or more thick, Minnesota angler Jason Durham avoids two specific danger zones: bottlenecks with ice-weakening current, as well as pressure ridges formed by adjacent ice masses.

Wearing ice picks around your neck and keeping throw ropes handy minimizes the risk. But you’ll want to remain alert for these potential mishaps:

Slip-and-Falls: Ice is slick, particularly in the absence of snow, and hands, wrists, knees and noggins often suffer the painful impacts. Idaho guide Kevan Paul recalls a father-son client trip when an innocent-looking flop turned serious. His 80-year-old client, who was wearing a cheap pair of cleats, slipped on the ice and bumped his head.

“We were sitting there fishing and after 15 minutes, the father looks over at the son and says: ‘Did I fall?’ He didn’t remember anything because he got a concussion. That’s why, for me, a good pair of ice cleats is invaluable, I don’t care how much they cost,” says Paul.

For example, Pennsylvania angler Dave Lefebre recalls a buddy catching the leg of his ice suit on fire when his portable heater exploded while he was lighting it.

Related point: Nebraska ice angler Robby Rembrandt, who works as a Flight for Life paramedic, suggests keeping a carbon monoxide detector in your shelter to prevent this unseen threat.

Snowmobiles: Power on slick surfaces must be managed with high caution, but North Dakota ice pro Jason Mitchell described a mishap that could’ve ended much worse than the bruises he suffered.

“I tried pulling out a stuck snowmobile with mine and when I got to the end of the rope, I went over the handle bars and broke off the windshield,” he says.

Auger covers help nix this threat, but even the seemingly simple task of installing these caps can bring fingers inside the danger zone. That’s why Rembrandt likes the Cold Snap Auger Cover, a hands-free device with foot-controlled on-off functions. Chances are the $25 cost is less than your deductible.