The Scourge: How to Win the Battle Against Disease-Carrying Ticks 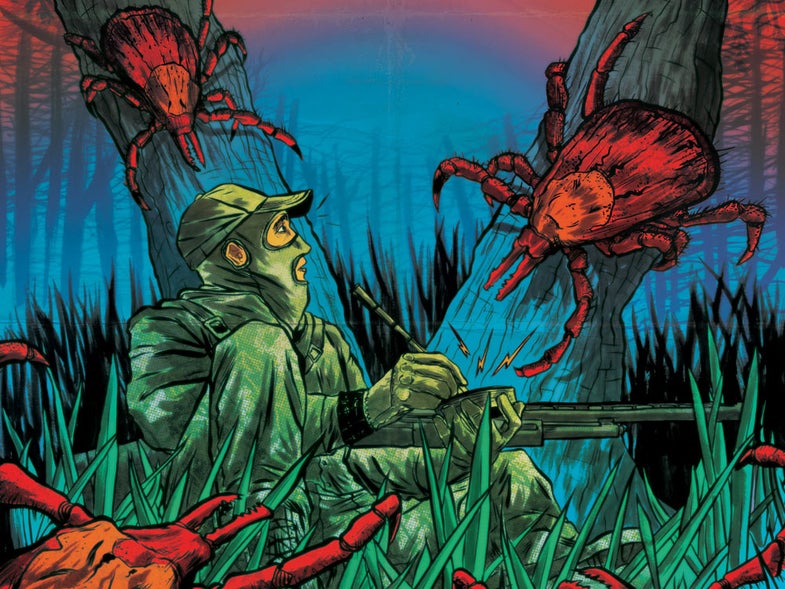 He knew something was wrong, but aches and pains and the occasional cold just come with the job. This time, though, Matt Morrett’s symptoms kept getting worse. This was no ordinary cold.

“I couldn’t stay awake. My ankles swelled, my whole body ached,” recalls the 47-year-old Marysville, Penn., resident. “I’d never felt like that before.”

An assistant producer for AvianX-TV, Morrett was filming a hunt in Kansas when he started feeling sick. He was aware of Lyme disease and various other tick-borne illnesses, so Morrett went straight to his doctor when he got home and asked to be tested. It came back negative. Despite a precautionary dose of antibiotics, the symptoms didn’t go away.

After fighting through headaches, fatigue, and soreness for two more months, Morrett located a specialist who took another blood sample. This time, his suspicions were confirmed. Morrett had Lyme disease.

“I never saw the bull’s-eye rash you always hear about,” he recalls. “My doctor asked if I remembered the tick that bit me. I’ve pulled hundreds of ticks off me during turkey season, so I had no idea which one it was. He said I might have contracted it that spring or even the spring before. Apparently, it can be in you for a long time without your actually having any symptoms.”

Eventually, though, the aches and pains, the dizziness, chills, fever, and fatigue creep up and settle in like a fog. Morrett was on three different antibiotics over an 18-month span. He spent much of that time on his back or struggling to stay awake when he was on the road filming hunts. The symptoms eventually faded, although nearly two years later, he still experiences headaches and soreness.

Morrett isn’t alone. Cases of Lyme, along with many other tick-borne illnesses, have increased dramatically since 1996, when about 16,000 cases were reported. Twenty years later, more than 35,000 cases were reported, although the CDC now estimates as many as 300,000 people contract Lyme annually. About 95 percent of those cases occur in just 14 states, all located in the Mid-Atlantic and Northeast, plus Wisconsin and Minnesota.

The good news, at least for turkey hunters, is that the highest rates of infection for the majority of tick-borne diseases, or at least their diagnoses, are in June and July. That’s when tick larvae typically fall off their first hosts and find a second host. Although adult ticks actually harbor higher levels of disease-related bacteria, nymphs (the second life-stage) are responsible for the majority of infections.

“There is a massive pulse of nymphs—which are primarily responsible for transmitting various diseases—in the late spring and early summer. There are a lot more nymphs out there than adult ticks,” says Oregon State University ecologist Dr. Taal Levi. “The larvae have to feed on an infected host before they can carry and transmit the disease.”

These days, ticks seem to have many infected hosts. That could have to do with something that wasn’t even on the radar in the eastern United States two decades ago: coyotes. Once rarely sighted in the Northeast and Mid-Atlantic, coyotes are now found in virtually every county east of the Mississippi River. Researchers, including Levi, have found a connection between coyotes and Lyme disease.

“There is not sufficient evidence to say for sure, but the correlation is pretty strong. Places with more coyotes and fewer foxes have higher rates of Lyme disease, and sites with higher densities of small predators like foxes and bobcats have lower disease risks,” says Levi.

Prior to this research, it was widely believed that whitetail deer were responsible for the increase in Lyme and other tick-borne diseases. The connection seemed logical. As deer numbers were spiraling upward in the Northeast and the Mid-Atlantic in the 1980s and early ’90s, so was the number of Lyme cases.

“The growth in deer populations likely played a role in the increase in tick-related illnesses because they serve as a host,” says Levi. “But we don’t really know how much of a role that is.”

As it turns out, deer don’t actually harbor most tick-borne diseases. They just serve as hosts for ticks. Small mammals—mice, chipmunks, and voles, in particular—have the highest probability of harboring various tick-related diseases. When a tick feeds on an infected animal, it picks up the disease and carries it throughout its life.

Since foxes mostly eat small rodents, they can help reduce the number of infected ticks by eating more mice. Coyotes tend to feed on larger mammals and carrion. But the two predators don’t get along. Coyotes either kill or displace red foxes, whose populations have plummeted throughout much of their historic range as coyote numbers have increased. Without an abundant fox population, small rodent numbers boom.

Reducing coyote numbers to boost fox numbers is a challenging, if not impossible task, especially in urban and suburban areas, where Lyme rates are highest. Cutting deer numbers may be a better alternative, according to a 13-year study conducted in a private community in Connecticut. It found that Lyme infection rates decreased by nearly 80 percent after intense and prolonged deer-culling efforts. Researchers utilized sharpshooters and hunters to bring deer densities down to about 10 per square mile, from a high of 30. Tick abundance also decreased by 76 percent.

“This was a private community with a relatively isolated deer population, so we were able to focus culling efforts in a small area,” says Connecticut state entomologist Dr. Kirby Stafford, a co-author of the study. “I’m not sure how realistic doing something like this on a larger scale would be. My thought is that it probably would not be.”

In other words, there is little we can do to eliminate Lyme and other diseases. The good news is that most are bacterial infections, which can be treated with a dose of strong antibiotics like doxycycline. Early research also indicates that stevia—an artificial, plant-based sweetener—may soon play a role in the treatment of chronic Lyme disease. The study, conducted by scientists at the University of New Haven, discovered that stevia was more effective at treating long-term complications from Lyme than were various antibiotics, although more testing needs to be done.

So far, though, there are no medications to treat the three viral infections that can be contracted from ticks. Bourbon (named after the county in Kansas where it was first recognized), Powassan, and Heartland virus victims have to hope that their immune systems can fight those illnesses. Some victims don’t recover. Of the 30 cases of Heartland reported to the Centers for Disease Control, at least two were fatal. Doctors know little about it. Nor do they know much about the Powassan virus. Of the 98 reported cases of Powassan since 2007, 11 were fatal, and half of the survivors are left with permanent muscle loss, memory problems, and recurring headaches, according to the CDC. So where are these new diseases coming from? They aren’t actually new, says CDC research scientist Dr. Rebecca Eisen.

“This observed trend is attributable in part to improved diagnostic capabilities, astute clinical observations, and increased awareness of tick-borne pathogens by researchers and clinicians,” she wrote in a peer-reviewed study published in 2017. “Several of these etiological agents were described many years before recognition of confirmed infections of humans, while others are newly recognized agents of previously characterized diseases.”

Similarly, the spike in Lyme cases is due, at least in part, to better public awareness, improved diagnostic methods, and increased reporting by the medical community. Researchers also believe more people are living closer to tick habitat or are spending more time outdoors.

“I think this is an epidemic much bigger than we realize,” he says. “When I was a kid growing up in Pennsylvania, we just didn’t have ticks. Now, I find them on me pretty much everywhere I go, and it’s usually a lot more than one or two. They seem to be in places where we never saw them before.”

Ticks on the Move

He’s right. Of the 10 species of ticks that transmit disease to humans, at least four are increasing their range. Researchers with the CDC found that black-legged ticks, which transmit Lyme and other diseases, are now found in nearly half of all U.S. counties, compared to just 30 percent in 1998. A large portion of that expansion is into the northern U.S. Eisen says deer are likely to blame for the spread of black-legged ticks, also known as deer ticks. As the animals disperse to new territory, they carry infected ticks with them.

“Weather could also be a variable,” says Eisen. “That seems to be case with the northern expansion of lone star ticks, which used to be limited to the South and Southeastern United States. Their range is expanding north, which seems to be a result of warmer winters.” 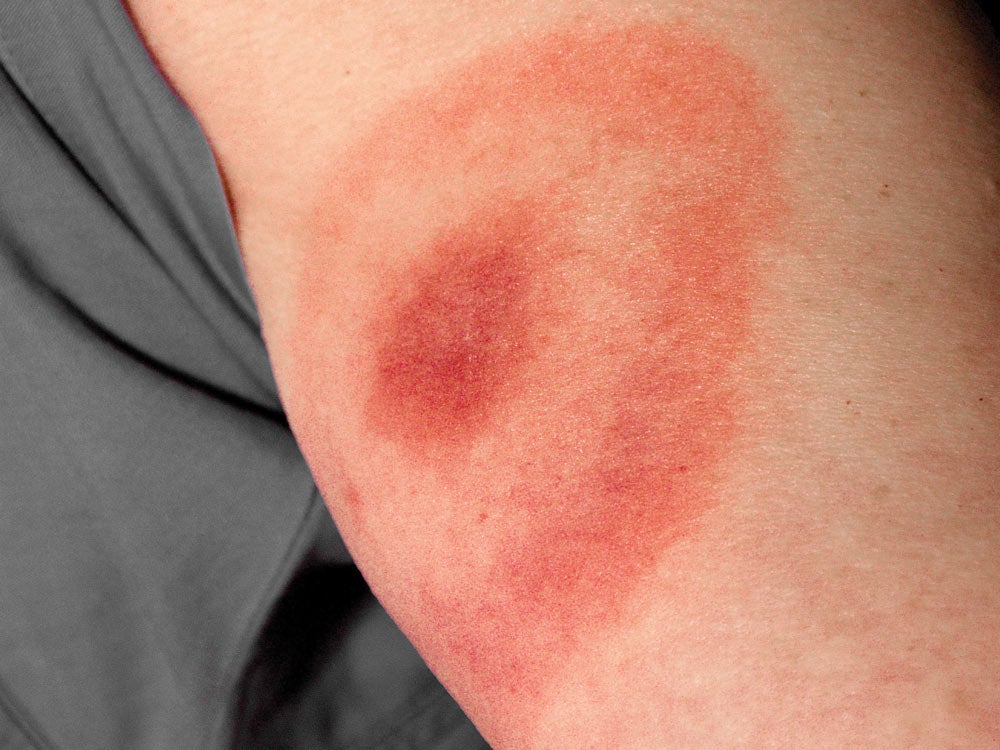 The iconic “target” rash that sometimes—but not always—accompanies Lyme disease.

Ticks aren’t just spreading into new territory—they are more active during the winter. Rates of infection are also increasing during the colder months, also likely due to warmer winters. Morrett occasionally finds ticks on him during deer season. That’s because they don’t actually hibernate.

“They can be active in any temperature above freezing. It is not unusual to find them at any time of the year in areas where it does not stay cold for extended periods,” says Stafford.

Read Next: STARI and 3 Other Tick-Borne Illnesses You Need to Know

Extreme cold does not kill them, which explains why New England, Minnesota, and Wisconsin have some of the highest rates of Lyme disease.

“Weather can play a role in tick abundance, but not in the way you might think. Abundant moisture in the winter, including snow, typically results in higher nymph abundance the following year. The snow acts as an insulator and helps ticks survive,” says Stafford. “A cold, dry winter will kill some ticks, but it probably needs to be a prolonged period of very cold temperatures. We don’t know how cold or how long. Even then, some will always survive.”

If that’s not enough to make even the most seasoned turkey hunter more cautious, consider this: Research in Connecticut found an increase in the number of infected ticks. Nineteen percent of ticks tested by the Connecticut Agricultural Experiment Station carried Lyme in 2012; just four years later, 29 percent carried it. Nearly 5 percent carried two or more diseases, including Lyme, anaplasmosis, and babesiosis. And 11 percent of lone star ticks carry at least one disease.

But don’t get ready to hang up your gun and take up bowling just yet. Despite evidence that tick-borne diseases are increasing, the odds of actually catching something are rare, especially if you take steps to protect yourself. Morrett does. So far, he has not had another bout with Lyme since he was diagnosed in 2012, but he’s still nervous.

“I feel like a hypochondriac,” he says. “Every time I feel a little achy or something, I’m wondering if I’ve got another case of Lyme. I don’t ever want to go through that again.”