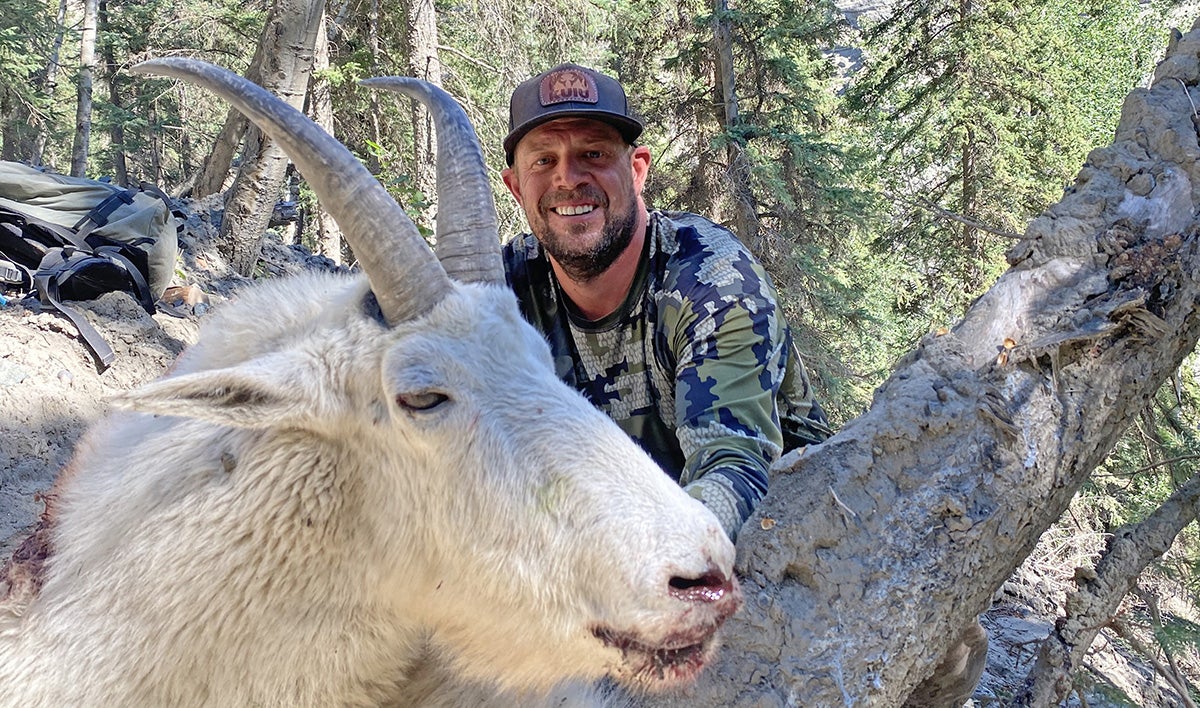 “Why does his head look so small?”

That was Justin Kallusky’s first question when he saw what would end up being the new world-record Rocky Mountain goat near the Stikine River in British Columbia. Kallusky had hunted the same spot with a friend in 2019, according to the Boone & Crockett Club, and he made the prediction then and there that the dramatic landscape would eventually produce a goat with 12-inch horns. On Aug. 23 2022, the 42-year-old lineman proved his own theory correct.

According to the official Boone & Crockett score chart, Kallusky’s goat grossed 60 5/8 inches. The five measurements on each horn—12 7/8 inches of length plus four circumference measurements—totaled to 30 3/8 inches on the left side and 30 2/8 inches on the right. With that 1/8-inch differential, the goat has a net score of 60 4/8 inches. That breaks the previous world record by three inches, which Troy Sheldon secured in 2011 while hunting in the same part of B.C.

“This new World’s Record is truly a sight to behold,” B&C Special Judges Panel chair Mike Opitz said in a press release. “A Rocky Mountain goat of this caliber is a true testament to continued conservation efforts and one tough hunter.”

Kallusky shot the goat with a 7mm Remington Magnum, Boone & Crockett confirmed. But it wasn’t until he recovered the goat that he realized how big it was.

“It was bedded facing uphill and stuffed up under a rock to hide from the sun,” Kallusky said, adding that all he could see was a fluffy white butt. The goat stood up four hours later, revealing to Kallusky the shocking horn-to-head ratio.

“I knew it was a good billy, but not until I walked up to it after the shot did I really understand,” he said.

All Rocky Mountain goats killed in B.C. must get an inspection from a provincial biologist. When Kallusky brought the goat in, the biologist told him to get in touch with local B&C Official Measurer Grant Markoski.

Markoski is in his 33rd year of measuring, but this goat was unlike anything he’d ever laid eyes on. Kallusky was worried he would have a heart attack, and he recalled how Markoski “put his hands on his head and started walking in circles.”

“It was so much bigger than anything I’ve ever seen,” Markoski said. “When you see it, your jaw will drop.”

The Boone & Crockett Club has recorded 1,439 Rocky Mountain goats over 47 inches, which is the minimum requirement for its Record program. Kallusky’s is the only goat to ever break the 60-inch mark. When Troy Sheldon entered his 57 4/8-inch goat in 2011, he broke a record that had stood for 62 years.