Kaden Titus tells the full story behind his record-breaking bull 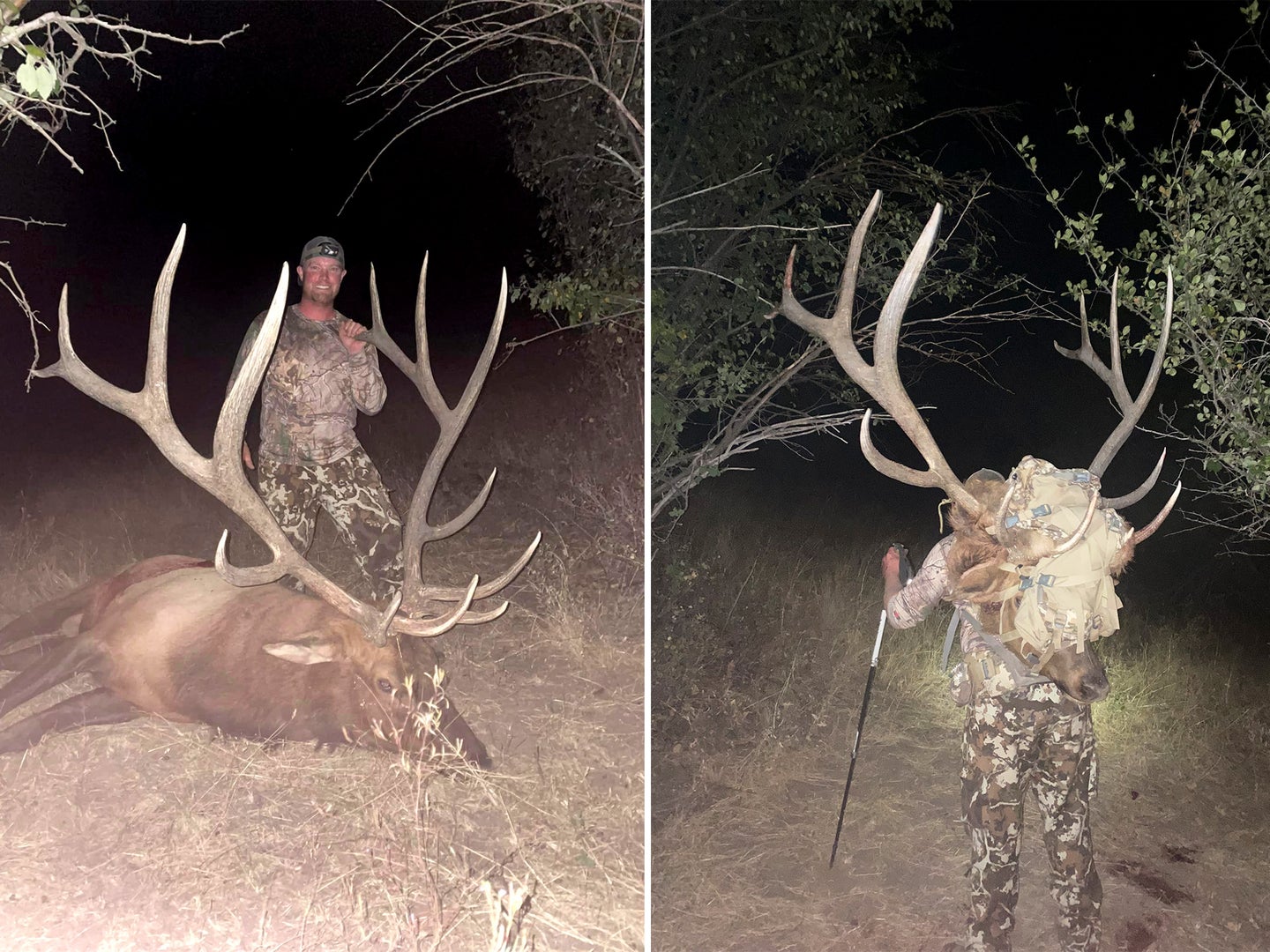 Oregon bowhunter Kaden Titus killed one of the biggest bulls in state history last September. Northwest Big Game Inc. scored the massive 7×7 in early December, and it’s now the official Oregon state archery record for typical Rocky Mountain elk. The bull grossed over 400 inches and had a final score of 392 and 0/8, which beats out the previous archery record of 376 and 6/8 that was set in 2006.

But Titus says he almost blew his chance at this massive bull. After an anxious morning of calling and playing cat and mouse in the timber, Titus missed his first shot, slinging an arrow right over the bull’s back. Standing shoeless in the pines without any gear, Titus threw down his bow and wondered to himself how he could have blown the shot so badly.

“I didn’t have my quiver, I didn’t even have another arrow, and my only saving grace was that I didn’t yell or move,” says Titus. “After setting—well I would say throwing—my bow down, I sat there for 10 to 15 minutes, and then the bull I was on earlier that morning popped off again. This guy chuckled right back at him, and he was maybe 75 to 80 yards away. He never busted completely out of there.”

The bull still hadn’t made him, and as it turned back uphill toward its bed among the trees, Titus figured he might get another shot after all. He hustled back to his gear and grabbed his quiver. He knew he’d have to make the second arrow count.

The first time Titus saw the record-sized bull was in a photo that his buddy Jordan sent. It was a few days before the opener, and Jordan was scouting a piece of private land where the two had permission to hunt.

“He had gotten some video and pictures, so he got ahold of me and was like, ‘Holy shit, there’s a big boy in the area,’” Titus says. “So, we knew that bull was in there, and we saw him from a distance on opening day, but after that he just disappeared. We hunted that area for the next 12 days and couldn’t turn him up, so I got discouraged and went to hunt a completely different area for a few days.”

With the bull that Jordan had spotted still imprinted on his mind, Titus then decided to go back into the same piece of private land on Sept. 16. He called Jordan, who told him he was too sick to hunt. So he went without him.

Titus tells Outdoor Life that he got into elk right off the bat that morning. He went straight for the most vocal bull in the area, but as he headed that direction, he heard another, weaker-sounding bugle coming from the other side of the draw. Assuming it was a smaller bull, he stayed focused on his target bull until that herd gave him the slip.

“I backed off the bull I was on, but that other bull just kept bugling back,” Titus says. “I thought it was just a satellite [bull] shading him, but I finally sat there long enough to pinpoint where he was. I figured he was bedded, and I had the whole day, so I went all the way around this knob just to go in there and check it out.”

Titus slowly worked his way into the thicker timber as the two bulls kept sounding off from either side of the draw. Eventually he got to within 100 yards of where he thought the satellite bull was, and when he let out a cow call, he got a hair-raising response.

“His bugle changed instantaneously. As soon as I let out that cow call, he absolutely screamed over the top of me,” says Titus. “I was expecting a rag 5 or something. I was in shock.”

Titus cow called for another 40 minutes but the bull wouldn’t budge. He switched to bugling, ratcheting up his calls a bit each time, and the two screamed over the top of each other for the next hour, but still the bull stayed put. By this point it was around noon, and Titus decided to put the sneak on him.

He didn’t want to risk catching anything on the brush as he snuck closer, so he dropped his pack and removed the quiver from his compound. He took off his boots, grabbed a single arrow, and spent the next two hours covering 20 yards of ground.

“I took my dearly beloved time getting up there. I’d wait for the wind to rustle some leaves and brush and then I’d take another step. Then I’d sit there and move some sticks and pinecones out of the way before taking another one,” Titus says. “At this point, I still didn’t know what he was, but it was long enough into the calling sequence that the anxiety would build and then he wouldn’t do anything. It’d build back up and then he’d calm back down. It was a roller coaster.”

It wasn’t until he reached the backside of a pine tree that Titus peeked around and caught his first glimpse of the bull’s massive tines. He ranged a nearby tree at 53 yards but couldn’t find a good angle to make a shot through the brush. Too afraid to call at this point, he watched the bull stand up and rake its bed before lying right back down. He’d watch the bull nod off for 10 to 15 minutes before snapping its head back up and standing up to rake its bed again. This happened three or four times over the next hour, and Titus’ patience was wearing thin. He stepped over to one side of the tree and clipped in his release.

He drew back as the bull stood up once again and quartered to him. Then the bull nosed down, raked the ground, and did a 180. With the bull at 50 yards and quartering away, Titus anchored a pin and released.

“I see the trajectory of the arrow and I’m waiting for it to just come down and sink in, but it never does. I shoot right over his back, and I hear it smack a tree. He blows out of there, goes down the hill about 50-60 yards right on the other side of some thick brush.”

Utterly disappointed with himself, Titus stood in the same spot for the next 15 minutes until the bull on the far side of the draw broke the silence. The bull he’d just missed chuckled back in response, and then it started working its way back to its bed in the pine trees. Titus was dumbfounded.

He moved quickly back to his pile of gear. He grabbed his quiver but kept his boots off, and then crept back to where he’d loosed the first arrow. The bull was working a scrape now, and every time he buried his head into the tree, Titus would creep a little closer. When he ranged the bull at 50 yards, Titus nocked a second arrow but he spooked the bull in the process. Now on edge, the bull tried to get on Titus’ downwind side, but then it turned and quartered to him once again.

“I still don’t know why he ever did that, but I went behind a tree and drew back, and I guessed him under 50,” Titus says. “I split my 40 and 50 pin, cow called to him, and he took about a half step too much and got between the boughs of this pine. I took half a step to my right, put it right behind the shoulder and let it fly. I heard the impact and it sounded good, but I couldn’t quite see where I hit him.”

Titus watched the bull trot off straightaway with the arrow still in its side. The placement looked good, maybe a touch high, but Titus couldn’t keep up with the bull without his boots. He walked back to his pack and called Jordan around 2 p.m. to let him know he’d just stuck a bull. Jordan’s first words were: What bull?!

Jordan showed up to help track the bull, and they found a small amount of blood that led them to a thick pile of brush where the bull was bedded down. After hemming and hawing, Titus pulled off his boots once more and made his third sneak of the day. He crawled closer, hoping to put another arrow in the bull, but when he got within bow range it blew out.

“I hightailed it after him, but again I didn’t have any boots on and I couldn’t keep up with him,” Titus says.

He finally made it to where he’d last seen the bull and noticed a cliff in the distance. It was almost too dark to see by now, but Titus approached the cliff and saw the bull lying at its base. He watched it put its head down and kick once more, and then it was still.

“It was a surreal moment,” Titus says. “It was almost 12 hours from when I was on him until he finally died, so I basically spent all day with him. But I gotta give credit to Jordan. He’s the one who actually found him, so it’s just as much his bull as it is mine. He wasn’t gonna miss that for the world. It didn’t matter how bad he felt.”

With a little help from Jordan’s uncle and his cousin, they packed out the elk that night and made it back to the truck around 1 a.m. Looking back, Titus says he knew the bull was a monster but that he and Jordan both underestimated the antlers at first. With the bull now atop the state record books, no one will be making that mistake again.