A deer-hunting tradition continues, despite the loss of its spiritual leader 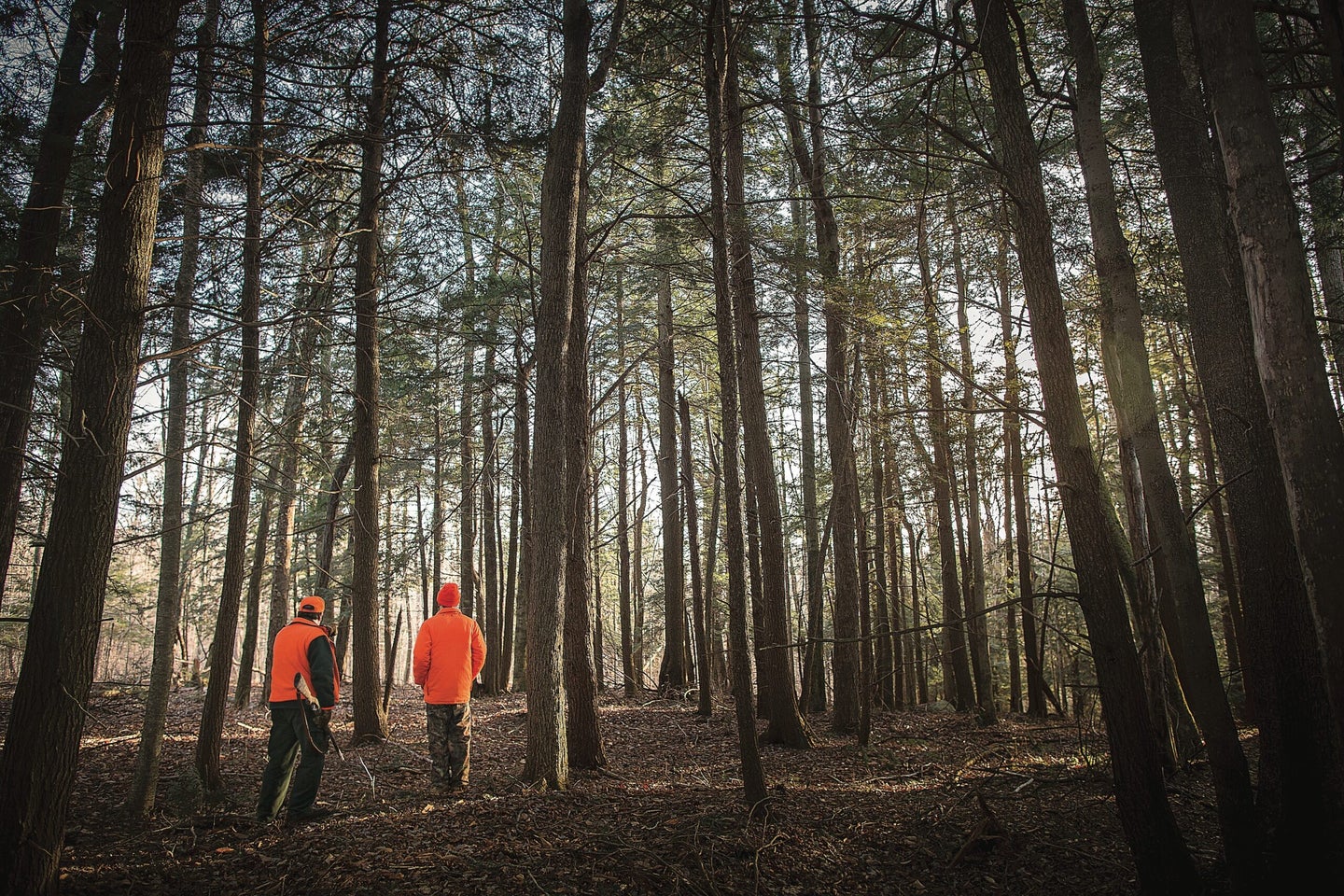 “C’mon, Beagle. Get your act together and come up with a damn game plan… Time’s a – wasting… Tommy would never have put up with this sitting-around-camp crap when there are deer out there to hunt.”

George Wise’s good-natured cajoling instantly hits its mark, somewhere deep down in Marty Cormier’s gut. Although the scolding was lighthearted, the resulting angst is palpable.

As he pores over topo maps and aerial photos, Marty, aka Beagle, calculates the next move. The job of Hunt Master is tough duty any day of deer season, but it’s Herculean when you’re tasked with casting 15 to 20 hunters across hundreds of acres of generally featureless public land. It’s all the more confounding when it’s mid-December, the deer have been pushed for weeks, your crew is toting muzzleloaders, and you’re trying to live up to the reputation of the Super Beagle.

The Loss of a Leader

It was Wise who had dubbed Tommy Cormier, Marty’s younger brother, “Super Beagle” back in 2002 for his uncanny knack of getting deer up on their feet and headed in the direction of one of his buddies waiting in the woods for driven deer to sluice past him. It was the same year that Tommy shot a giant buck on a hill called Round Top not far out of town.

“Just think about beagles for a second,” Wise explains. “What do they do? They zigzag through the thickest damn cover in the woods and get stuff up and moving–and then they chase like hell. Well, that was Tommy. What else happens? People follow beagles through the woods. I bet that half the kids in town learned how to hunt because they followed Tommy through the woods. He just wanted to teach them how to hunt. Hunting wasn’t what he did–it’s who he was.”

“There was no keeping him out of the woods,” says Tommy’s father, Ray. “If deer or turkey season was open, you wouldn’t see him–he was gone. And whether it was Josh and Steven [Tommy’s sons], or his nephews and nieces, he’d take some kid fishing or wake them up in the dark, get them dressed in warm clothes, and take them out in the woods to scout for deer and turkeys. He got them involved almost as soon as they could walk.”

But then, it all went to hell. Tommy Cormier, just 36 years old, was gone. The father of two young boys died tragically in an ATV wreck that forever changed the lives of the survivors.

When they laid Tommy to rest, cars lined both sides of Route 57 for half a mile. Mourners young and old walked arm in arm up the long hill to the family plot. You couldn’t miss it–it’s next to the giant oak tree, the one that consistently drops acorns and draws in turkeys and deer. And you couldn’t mistake Tommy’s Boys. They were the ones dressed in camo.

They might not have known it then, but this handful of men was being transformed from a simple ragtag group of buddies who occasionally hunted together into a tightly bonded crew of hunters. Their collective mission is to one day shoot a buck “as big as Tommy’s” in country that has historically had few big deer, keeping the Super Beagle’s spirit alive in the process.

That spirit is what drives them today, what makes them work long hours in the blue-collar world of construction, plumbing, concrete fabrication, and engine repair during spring and summer so that they can take time off each fall to hunt. It’s why, even though few of Tommy’s Boys live more than 10 miles away, they–as Tommy always had–headquarter their seasonal deer camp in Hank Zelek’s old Quonset hut, which has no running water and only a woodstove for heat. And it’s also why kids in oversize blaze-orange hats and vests are always a part of camp. Tommy wouldn’t have had it any other way. It’s his memory that provides them all with the motivation to walk the woods right up until the season’s bitter end on New Year’s Eve, continually trying to outsmart whitetails like Tommy tried to teach them.

“He was just special,” says Marty. “As a person, everyone just instantly took a shine to him. As a hunter, well, Tommy could pattern deer like nobody’s business. He saw stuff that we didn’t. With that big buck he killed, he somehow knew exactly where the deer would be on opening morning. So that’s where we went and that’s where he was.”

By Boone and Crockett standards, no one will ever confuse the deer of southern New England with those of Wisconsin or Kansas. Historically, if hunters in the Northeast wanted to shoot a top-end buck, they’d load up the truck and head for Vermont’s Northeast Kingdom or Maine–snow-tracking country. Occasionally, someone would come home with a buck to boast about, but they’d most likely be bragging on body size rather than antler mass.

But lately, southern New England has come roaring through on trophy-buck bragging boards. It may well have started the year of Tommy’s buck–a 10-point, 200-pounder that he often described as “a deer like you’d read about”–and the trend has continued. In the fall of 2011, for example, a 226 7/8 non-typical set a new Connecticut bow standard, followed last fall by a 198-inch non-typical bow kill and a 210-inch non-typical muzzleloader kill in Massachusetts. The relatively new phenomenon of big southern New England deer is most likely due to a number of factors, including relatively easy recent winters, a lack of hunting pressure, and a couple of record–setting mast crops.

“Deer Week,” as many continue to refer to deer season, used to last just five days and consisted mostly of a scattering of distant shots and an occasional glimpse of a white tail. The fortunate few who scored hung their spikes, forkhorns, and does in front of their camp with chest-jutting pride.

“If you saw one deer all week, you were lucky,” explains Charlie Pease, who has spent 40 years hunting these same woods. “I wouldn’t say that the deer hunting is great now, but at least you’ve got a chance at seeing a really good buck.”

Which is why Marty studies his topos harder than he ever did his schoolbooks.

“What would Tommy do?” he says under his breath. “That little s*$@ always knew where to go and how to drive it. If he got a deer up and running, he’d stay on it and eventually get it out in front of someone–unless he shot it himself. Someone would get a shot, though.”

At least a dozen men identify themselves as Tommy’s Boys, but the core of the group are his brother Marty; the veteran Pease and his son, Chuck; Tommy’s closest friend, Rich Hamilton; Brian McCuin; Maine regulars Wise and Steve Powers; and relative newcomer Billy White.

“We’re doing Round Top,” Marty finally announces. “We pushed deer out of there yesterday, but that doesn’t mean anything. They probably just circled around us and went right back into the thick stuff. Hell, we’d do it with Tommy every day of deer season sometimes. I’ll drive it with Billy, Rich, and Brian. Charlie can place the standers. Let’s go.”

Moving Past a Tragedy

The “yesterday” of Marty’s charge was a day no one in the group, or the country, will ever forget–the day of the senseless massacre of teachers and schoolchildren in Newtown, Connecticut. While the group of muzzleloader-toting hunting buddies, some of whom had let their young kids skip school for the day, had been pushing a patch of timber, an unimaginable horror was taking place just 50 or so miles away. Word broke when someone checked his cell phone as hunters gathered around the deer-less bed of Tommy’s old Dodge Ram pickup.

“Do you think we should go down there to help? I mean, what the hell is going on? It’s got to be terrorists,” someone muttered, grappling to make sense of the incomprehensible. Everyone searched for answers, with Tommy’s hunting truck a fitting centerpiece to mourn those taken so young. “What now? What should we do?”

“I think we need to do another drive,” Marty responded. “Grab the kids and let’s hunt.”

It was all anyone knew to do.

By the time the hunters return to Round Top the next day, the full horror is known. Marty, in Tommy’s hunting truck, leads the way down the old two-track through the woods onto state land.

“Let’s go, boys, we’re here,” he says. “And please, will you guys shoot something like you read about this time?”

The sight of the blaze-orange troop piling out of the other vehicles would have brought a familiar broad grin to Tommy’s face. There seem to be more kids than there are adults–few old enough to carry their own muzzleloader. Along for the hunt are Tommy’s teenage sons, Josh and Steven.

With Marty in the lead, Tommy’s Boys tackle Round Top. Drivers are to push the cover uphill while Charlie Pease places standers along the crest of the quarter-mile-long ridgetop, telling each precisely where to stand, which way to face, and how long the drive would take.

Two hours later, the Round Top drive is done—no shots fired, no deer seen, no surprise there. Tommy’s Boys once again gather around the bed of the empty pickup truck, as they had the day before.

“Yeah, it never really works out the way you want it to,” Pease says. “But what the heck, you never know.”

It’s what Tommy would have done. And it was all anyone knew to do.

This story originally ran under the title “Tommy’s Boys” in the December/January 2014 issue of Outdoor Life.