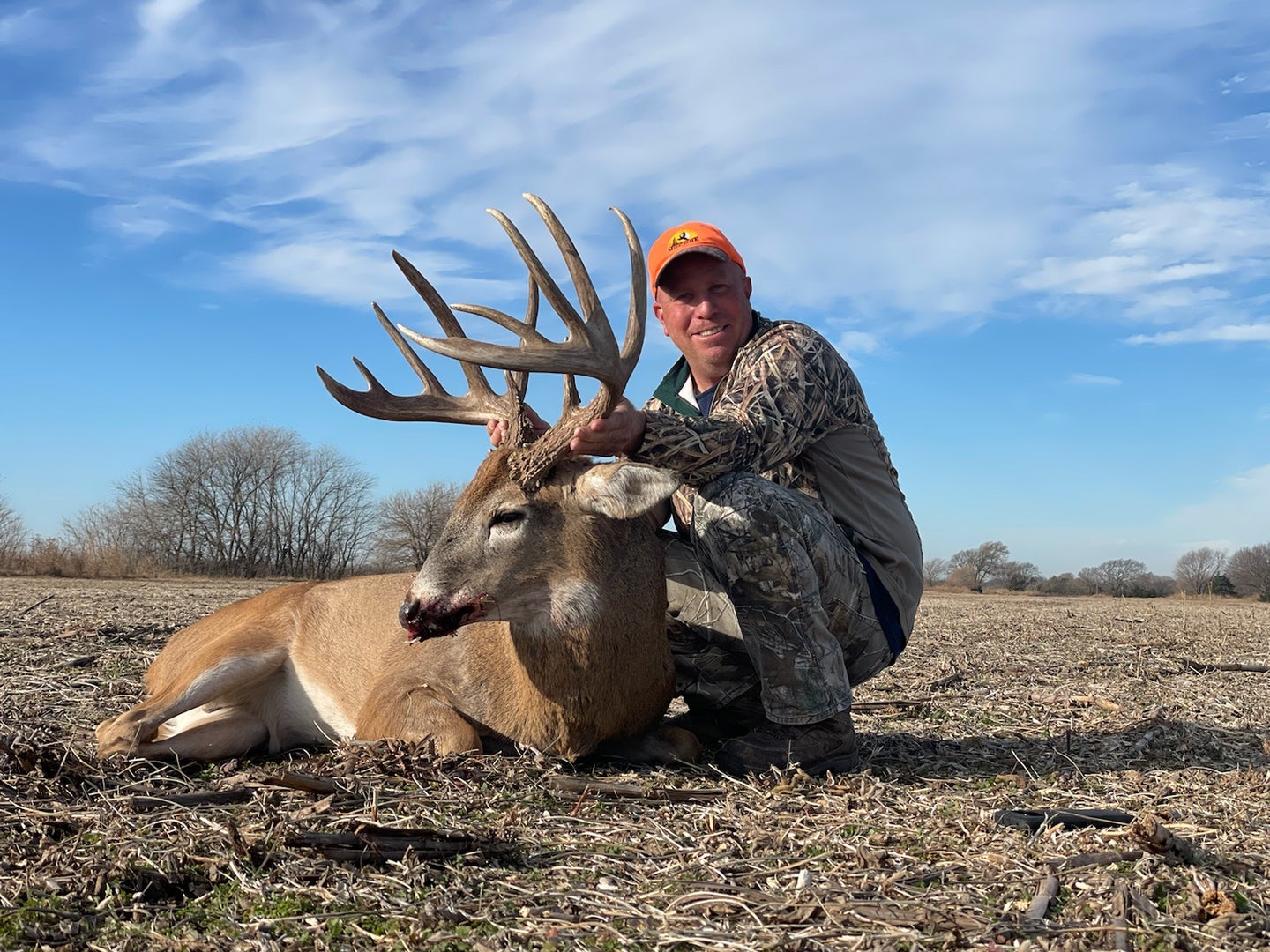 Dec. 3, was an ideal cool morning for a deer hunt on the Kansas prairie. Steve Lippitt and buddy, Kyle Barton, climbed a hilltop overlooking the 320-acre private farm he has hunted over the years. The Bartlesville, Oklahoma, insurance agent knew there were some great bucks on the place that he could shoot at longrange with his .308 custom-built Baer rifle with BAT-action and Nightforce scope.

“It was the perfect morning because there was absolutely no wind and I wouldn’t have to calculate bullet wind drift,” says Lippitt, 50, who has 20 years of longrange shooting experience.

Lippitt had seen a great buck on the farm a few days prior, but couldn’t get a shot at the deer. Heck, he almost hit the buck with his vehicle on Dec. 1. At the top of the Kansas hilltop on Dec. 3, Lippitt and Barton popped open a portable shooting table, then tucked up close to a cedar tree as a backrest.

“Soon after daybreak, a few does stepped into a cut bean field, and we were watching them to see if they attracted bucks,” says Lippett. “About 8:30 a.m., we spotted a big buck and I ranged him at 870 yards. He ran through the does checking to see if any were receptive, but the buck was moving and I waited. I knew he wasn’t going to stay long, and would be off looking for more does. So I was going to take him the first chance I got.”

The buck paused his doe assault, and although he angled slightly toward Lippitt, he squeezed off a shot, sending a hand-loaded 205-grain Berger bullet through the animal from 849 yards. The .308 bullet broke the buck’s shoulder and dropped it on the spot. The hunting duo got to the buck and were stunned at how big he was. The buck was far bigger than any deer they’d ever taken.

The 5 1/2-year old buck weighed 260 pounds on the hoof. It’s a main-frame 12-pointer with incredible mass, and a nearly 2-inch kicker for 13 scorable points. He green-scored as a typical buck at 203 5/8s inches gross, netting 190 4/8s inches, according to Lippitt. If that score holds up, the deer will be in the top 10 for typical bucks taken in Kansas by a rifle hunter. The current record is held by Dennis Finger, who shot a 190 2/8-inch buck in 1974. Lippitt sent photos of the buck to the landowner, and he shared it with friends and neighbors. He learned other hunters had trail camera photos of the deer, and that one unlucky bowhunter missed the buck at 20 yards earlier in the season.

Read Next: Kansas Hunter’s First Ever Archery Deer Is One of the Biggest Bucks of 2021

While dropping a buck from such a long distance is remarkable, it’s well short of other bucks he’s taken via long-range shooting. Lippitt says he downed a Nebraska 12-point buck earlier this year at 950 yards, and a few years ago he killed another Nebraska deer from 1,300 yards. But this most-recent Kansas 203-inch behemoth stands apart from the others.

“I have been hunting whitetails a long time and never would have thought I’d shoot a typical buck of this caliber,” Lippitt says. “He definitely is a buck of many lifetimes, and I shot him on my wife’s birthday, so I owe her dearly for the chance to collect such an incredible animal.”