Cory Craft missed out on this big Georgia buck with his bow twice, but tagged out during rifle season 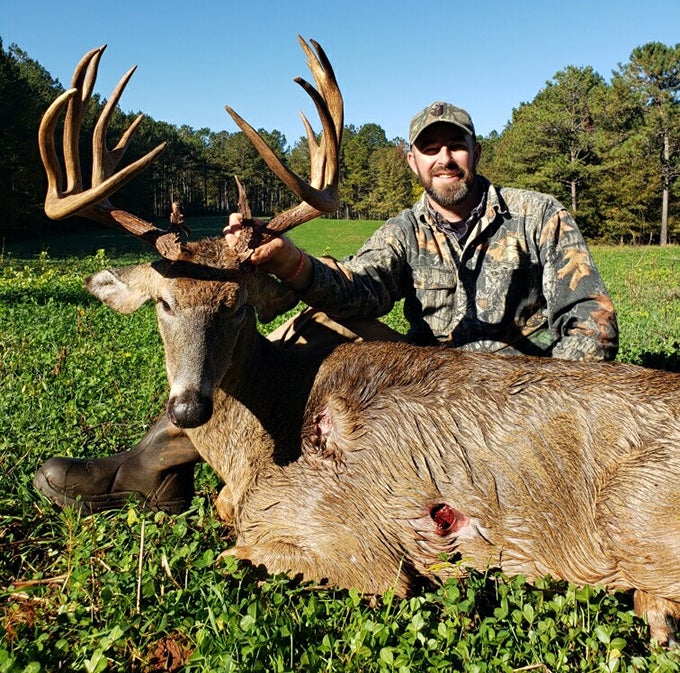 Harris County in west-central Georgia is a haven for big bucks. Cory Craft manages 7,200 acres there near the town of Pine Mountain.

“I first saw this buck two years ago when it was a 3-year-old,” Craft told Georgia Outdoor News (GON). “He showed up for several days, but just disappeared. He then started showing up on my neighbor’s property. I never saw him last year. My neighbor didn’t see him for a long time. My neighbor and I communicate well. He finally sent me a picture and said, ‘Look who showed back up’. The buck spent last summer on my neighbor’s property, but I never saw him.”

Craft started getting trail cam photos of the buck on his managed land during September’s bow season and came close to taking him.

But the buck returned an hour later.

“I had bought a new release for my bow that day and I didn’t know the trigger tension was a lot lighter,” Craft said. “He was just 22 yards away. I was wearing a glove. I drew back and was settling a [sight] pin on him when I touched the trigger and it went off. The arrow hit him right on the shoulder blade. There wasn’t much blood.”

The buck disappeared, and Georgia’s bow season faded into gun season. Fortunately, Craft’s neighbor told him the big buck Craft had bloodied with his bow returned and was healthy. A week later, Craft was getting trial cam photos of the buck on his property again, and the deer was regularly bedding in a thicket.

Craft decided to hunt the buck the afternoon of Nov. 12.

He spotted a smaller buck chasing a doe, and when glassing the deer at 80 yards he spotted the bigger buck bedded in cover but couldn’t get a shot at the buck’s shoulder. That’s when the smaller buck that had been chasing the doe went toward the bigger buck, and the larger deer stood to confront the lesser buck.

The deer has 18 points on a basic main-frame 10-point rack, green-scoring 199 inches, with a good chance of inclusion into the Boone & Crockett record book after the required 60-day drying period passes.