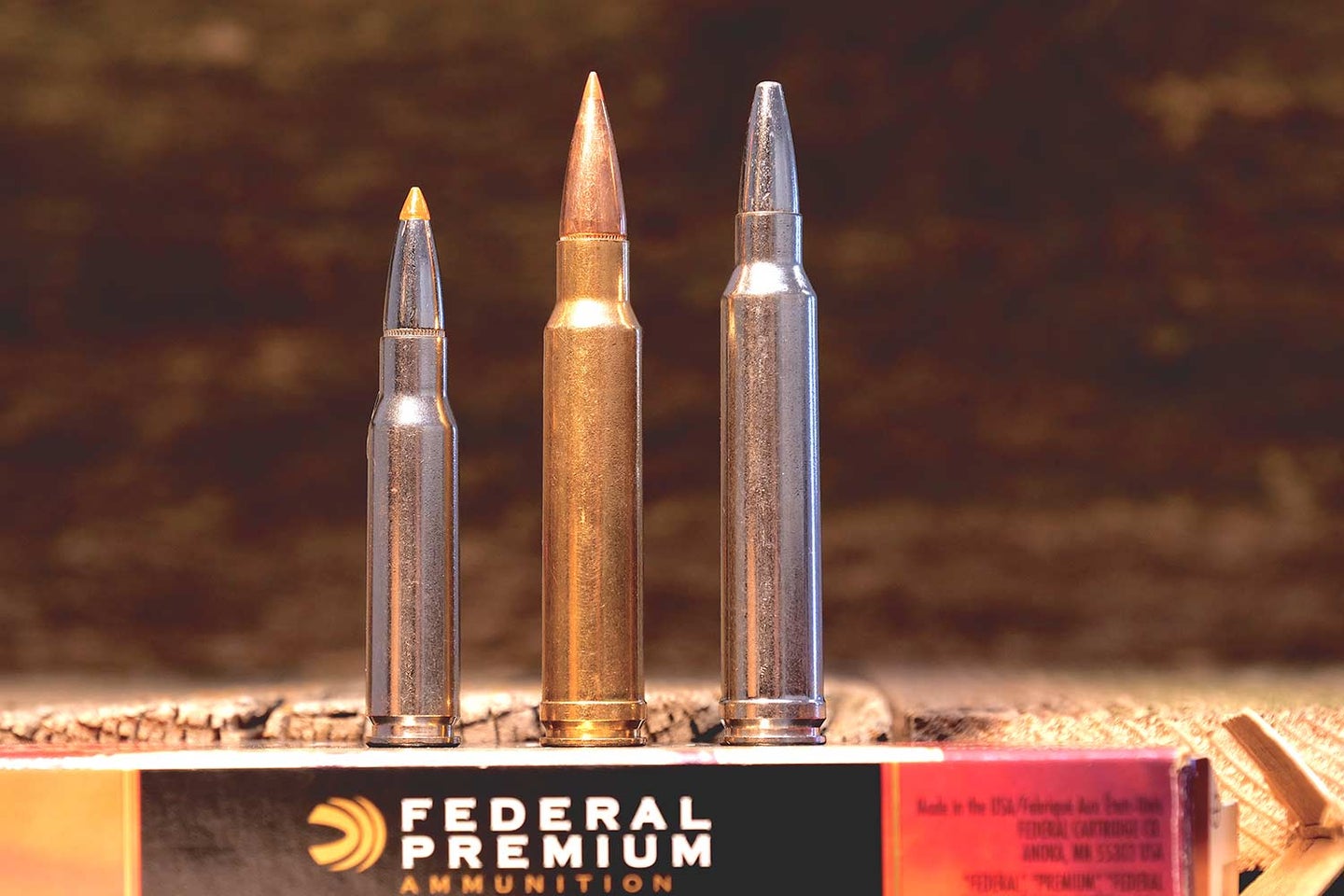 You can hunt all southern Africa’s plains game species with one rifle if it’s chambered for the right cartridge. And that cartridge doesn’t have to be a big hairy magnum.

The simple truth is that ordinary “deer” cartridges in the hands of ordinary hunters work to terminate ordinary African game. African farmers, ranchers and sportsmen have been hunting native impala, oryx, blesbok, warthogs, kudu, wildebeest, waterbuck, and all the rest (even buffalo, lion, and elephant) with medium caliber, medium power cartridges for more than a century. We’d consider many of them perfect for whitetails, mule deer, caribou, elk, and moose. Like most pragmatic country folk, Africans make do with inexpensive rifles shooting inexpensive, commonly available ammunition in average cartridges such as .303 British, .30-06 Springfield, and 7x57mm Mauser. Which strongly suggests we visitors might succeed in Africa with our own deer and elk rifles.

Thanks to its use by the military (as 7.62x51mm NATO,) especially snipers, the .308 Winchester has earned a reputation as a deadly accurate, rather mild-recoiling .30-caliber. It’s essentially a shortened version of the .30-06, even though Winchester engineers reportedly used the .300 Savage cartridge as the platform for designing the .308. Regardless, what they ended up with is a cartridge with the same diameter rim and head as the .30-06 family of cartridges, but a half inch shorter.

Since the .308 Winchester’s introduction in 1952. its length has become the standard for what we call short-action cartridges and rifles to match. Having a shorter action means slightly less weight, less cycling time, and, potentially, more accuracy because, all else equal, there should be less inherent flexing of the bolt/barrel/cartridge lock up. Relatively straight side walls enhance powder space, but a shallow, 20-degree shoulder reduces it. Overall the .308 Win. has sufficient room for about 56 grains of water. Powder capacity in grains varies significantly due to variable powder densities and shape.

Because it shoots .308-inch diameter bullets, the .308 Winchester can be loaded with anything from 100-grain plinkers to 210-grain thumpers. The lightest projectiles, predictably, suffer low aerodynamic efficiency, but can be driven around 3,200 fps (feet per second). They lose energy quickly and deflect significantly in crosswinds.

With bullets on the heavier end of the caliber, muzzle velocity suffers, but kinetic energy at all ranges is higher and wind deflection lower, as the ballistic table for a 180-grain Boat Tail Spire Point shows.

Because 190-grain and heavier .308 bullets are so long, they intrude deeply into the .308’s powder space, limiting MV (muzzle velocity). Nevertheless at launch speeds from 2,400 fps to nearly 2,600 fps, such high B.C. slugs scribe trajectories more than flat enough for much, if not most, African hunting. And they really help tame wind deflection, as the ballistic table shows.

For addressing many species, 2,500 ft-lbs (foot pounds) of energy at 100 yards may be more appropriate than a flat trajectory to 300 yards. Either way, you get to decide. Most experienced hunters land on 150-grain, 165-grain, and 180-grain bullets as best in the .308. Most factory loaded ammunition comes with bullets in this range, too. You could tailor bullets to specific animals, but since you never quite know what will show up during safari, it’s safer to settle on one bullet for everything except, perhaps, a specialty hunt for something out of the ordinary like a leopard, hippo, eland or 12-pound dik dik.

Recoil with a full-house 150-grain load in an 8-pound rifle should shake you with around 17 ft-lbs of recoil energy at a recoil velocity of 11.7 fps. A 180-grain load will rattle your teeth with 18.8 ft-lbs at 12.3 fps. These are recoils anyone should be able to manage, suggesting precise shot placement. Perfect.

This cartridge lands in many of our performance comparison reviews because it’s so good. Sort of a Goldilocks cartridge. Not too big or small. Just right. We could select many other .300 magnums for this spot, but none are as ubiquitous, tested, or available in affordable rifles. Not

So, at the risk of redundancy, we present the old .300 Win. Mag. of 1963 as our “middle of the road” African plains game round. Many veterans of safari would call it ideal.

As you know, this .300, an off-shoot of the longer .300 H&H Magnum, shoots the same bullets as the .308 Win., just 500 fps or more faster. And, as we’ve all heard, speed kills! In fact, speed contributes more to bullet hitting power than does weight. A basic reality of physics is that doubling a projectile’s mass doubles its energy. Doubling its speed quadruples its energy. As long as the bullet is built tough enough to withstand the impact energy, it should be more deadly at higher speeds. But things don’t always work that way, as we’ll touch on later.

More significant than increased energy might be decreased drop and drift. With both the .300 WM and .308 Win. zeroed about 3 inches high at 100 yards, the 300 drops almost 6 inches less at 300 yards and drifts nearly 3 inches less. That’s enough to make the difference between hit and miss. At 400 yards, of course, the difference is even greater. If you anticipate getting lots of shots at widely varying distances without time to employ a laser rangefinder, the extra reach of the .300 Win. Mag. might make it your baby.

But before rushing to select the .300 Win. Mag. as your magic wand, consider recoil. When throwing a 190-grain bullet 3,000 fps, an 8-pound rifle will kick with 37.3 ft-lbs at 173 fps. If you are not capable of handling that shot after shot without flinching, you’ll be better off with the .308 Win. Alternatively, you can carry a 9- or 10-pound rifle in 300 Win. Mag. A 10-pound rig tames recoil to 11.8 ft-lbs at 8.7 fps. With proper training, anyone without physical limitations should be able to shoot a 300 Win. Mag. without flinching.

Most hunters are surprised to learn that the .338 Winchester Magnum preceded the .300 Win. Mag. by five years. I suspect in those days Winchester thought the .30-06, .300 H&H and .300 Wby. Mag. had the .30-calibers covered while larger calibers throwing heavier bullets were falling behind the times. Wildcatters and a certain gun writer named Elmer Keith were getting plenty of attention with their .333 OKH (30-06 necked to .333”) and .334 OKH (.375 H&H necked to .338) wildcats. So Winchester engineers straightened the side walls of the .375 H&H belted case, shortened it to fit standard-length actions, sharpened the shoulder to 25-degrees, and necked it down to hold .338-inch bullets. With its 86-grain water capacity, the case had plenty of space for enough powder to propel a 250-grain bullet 2,700 fps from a 24-inch barrel. That’s fast enough to churn up 4,050 ft-lbs of kinetic energy at the muzzle and 43 ft-lbs of recoil at 18.7 fps at the shoulder in an 8-pound rifle. A 10-pound gun moderates that to 34.6 ft-lbs at 15 fps, which is still a hefty dose of ouch. Such is the price one pays to put a heap of energy on target.

While one’s instinct is to assume such a heavy bullet at a relatively tame velocity would limit performance to moderate ranges, a good boat tail spire point with a B.C. in the mid .5s (like a Nosler Accubond) and zeroed 3-inches high at 100 yards will peak just 3.3 inches high at 125 yards, hit point of aim at 240 yards, and drop just 5 inches at 300 yards. Deflection in a 10 mph cross wind would be in the neighborhood of just 5.5 to 6 inches at 300 yards. Clearly, this “big” medium caliber can run with the .300 Win Mag. At 300 yards it’s still carrying 2,800 ft-lbs of energy. That’s 100 ft-lbs MORE than the .308 Win. kicks up at the muzzle.

Read Next: The New Norma Bondstrike is a Long-Range Hunting Bullet for .30 Caliber Shooters.

Factory ammunition for the .338 Win. Mag. can be found with bullets weighing from 180-grains to 250 grains, but handloaders can stuff 300-grain slugs aboard and nudge them as fast as 2,400 fps. This results in muzzle energy of 3,840 ft-lbs and 30-yard energy of 2,830 ft-lbs. Compare trajectory tables and you’ll see this is less muzzle energy than the 250-grain and minimal gain far down range, so why bother? The answer is momentum. Increased penetration. Because the 300-grain bullet is longer and has a higher sectional density, it has the potential to penetrate more deeply than any lighter bullet of the same materials and construction.

Don’t make the mistake of assuming impact energy makes all the difference. I’ve seen 150-pound antelope absorb 300-grain slugs from .375 H&H Magnum and dash off like a whitetail hit with a .223 Rem. No knockdown. No DRT. Game of all kinds and sizes has the elasticity to absorb all the energy you care to throw at them with a shoulder-fired gun without going down. Terminal bullet performance and placement are way, way more important than power. A good 165-grain bullet from a .308 Win. you can shoot precisely is more effective than a 400-grain, 5,000 ft-lbs bullet on the fringes.

Ponder ballistic charts long enough and you can get dizzy before emerging out the far side with some solid conclusions moderated by experience. The history of bullet performance on African plains game animals is vast, but spread over decades and thousands of individual hunters. Throw in hearsay and inevitable message corruption down the grapevine and confusion could rein. Elephants have been killed by a lucky shot from a .22 rimfire. Sable solidly hit and dropped by a .470 Nitro Express have arisen to skewer the hunter. Oryx center punched with a triad of .300 Winchester Magnum loads loped into the sands of the Kalahari, never to be seen again. Eland slapped with a .308 Winchester died on the spot.

The truth is that anything can happen and probably has happened, but the consensus is that bullet construction and placement matter more than caliber and kinetic energy. The wrong bullet in the right place can terminate the biggest animal instantly while the right bullet in the wrong place — or a half dozen of them — merely wounds. Ten thousand foot-pounds of energy applied to soft, elastic tissue of cardiovascular organs may have no more immediate effect than 500 foot-pounds.

How should we interpret this? My take is to choose precision bullet placement first, bullet construction for desired terminal performance second, and on-target energy last. I’ve seen too many large, heavy bullets hauling astonishing levels of kinetic energy strike game with no more life altering results than a target arrow. I’ve recognized my self-doubt and felt myself flinch while shooting heavy recoiling rifles and missing or wounding. And I’ve felt the confidence of precise holds and clean trigger breaks while shooting light recoiling rifles that lead to quick termination of plains game large and small. Be honest with yourself. Don’t let your ego get in the way of choosing the safari rifle, caliber, and cartridge that will help you hunt honest and shoot straight.