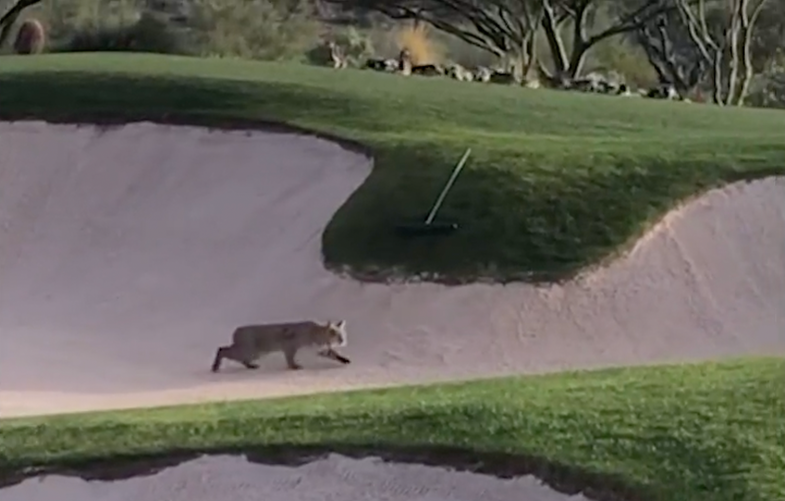 Last week, a group of golfers caught a bobcat stalking ducks on camera at an Arizona golf course. They captured a video of the bobcat using a sand trap on the 15th hole to stalk a flock of ducks that were feeding on the putting green. He crept up the bank of the trap and sprang into action, taking down one duck and then carrying it off the course. The golfers watched the scene play out, and one of them was able to record the successful hunt on video, which was later posted to Instagram and then shared by TMZ Sports.

The group of golfers were playing the back nine at Silverleaf Country Club in Scottsdale, Arizona, on Jan. 21. The minute-long clip captured on one of their phones shows the bobcat slinking within range of the birds, and then stealthily creeping into the bunker to get the drop on the ducks. When he attacked the entire flock flew off, with the exception of one unlucky duck, which looked to be a wigeon. Golf courses are a common place for waterfowl and other bird species to congregate in Arizona. There’s typically plenty of open water, created by man-made lakes, and grass for ducks and geese to feed on. It’s also not uncommon to see duck hybrids in these locations as many of the birds never stray far from the course and the different species breed with one another.

Judging by their commentary, the golfers were enthralled as they watched the predator move in for the kill. And when the bobcat finally made its move, blowing up the group of ducks and pouncing on one of them, the group erupted in cheers and laughter. “That’s terrible,” one of the golfers said, while another yelled: “That’s amazing!”