The Ravin R10, Ravin’s best crossbow for the money, offers performance for a reasonable price 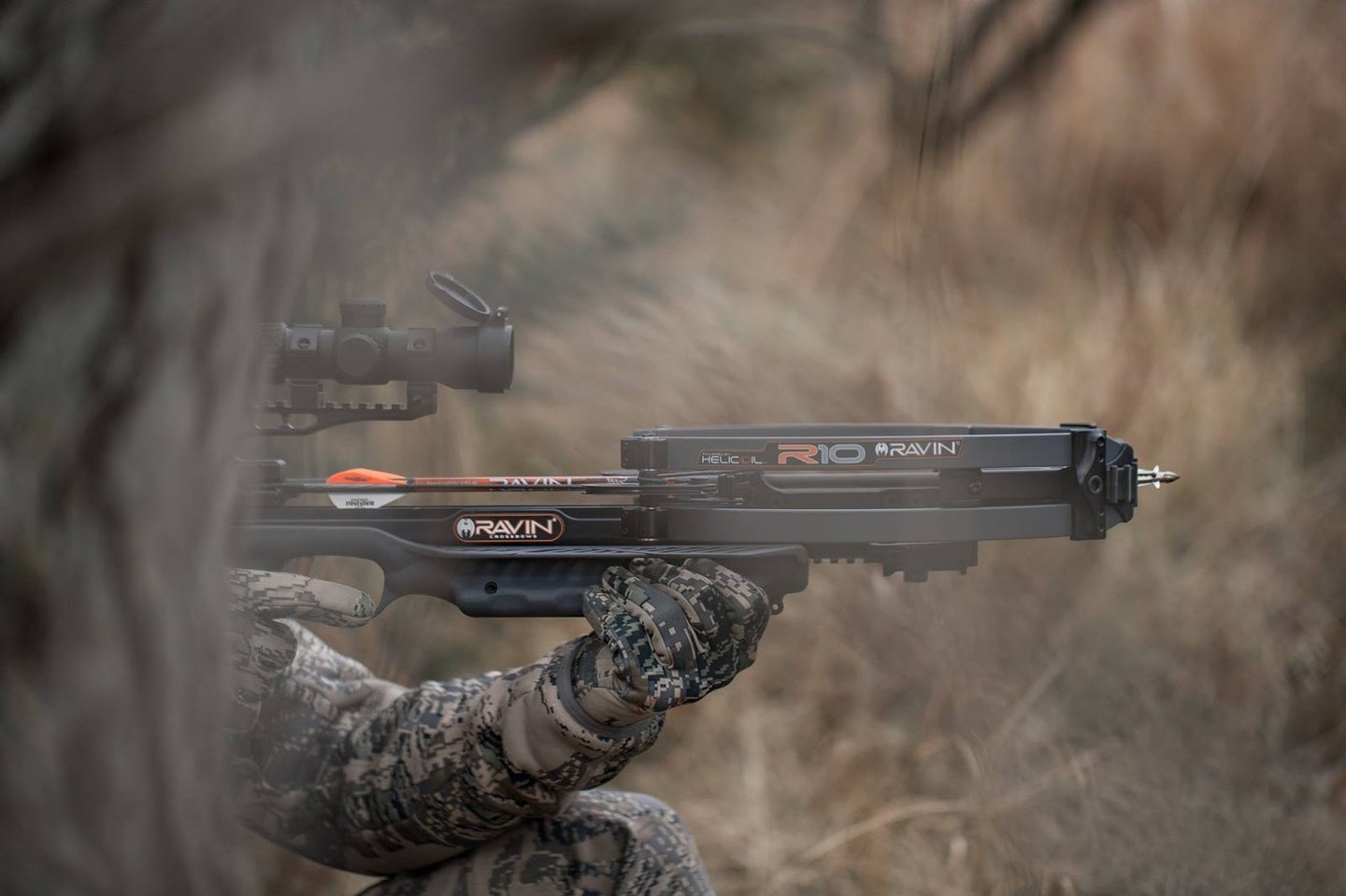 The Ravin R10 is one of the best hunting crossbows for the price. Ravin
SHARE

The Ravin R10 crossbow is surprisingly easy to use for a crossbow that looks so powerful and technologically advanced. And I think that’s what has made Ravins so wildly popular in recent years. Without sacrificing an inch in performance – heck, if anything, they are setting the standard – they have taken the intimidation factor out of crossbows. Men, women, and children of nearly all ages, abilities, and statures can cock, load, and shoot this crossbow with incredible accuracy at impressive distances.

Ravin launched the R10 in 2019, and it remains in the crossbow manufacturer’s lineup today. I’m guessing that’s because it allows Ravin to offer a high-quality crossbow at a price that’s lower than its newer models. After all, not everyone wants to shell out $2,500 for a crossbow, and the R10 sells for half that amount.

The R10 crossbow package I borrowed from Lancaster Archery Supply for this review sells for $1,299.99. That includes the bow and crank handle, scope, quiver, and three bolts with field points. Across the spectrum of the best crossbows on the market, that’s a bit pricier than the average. But for what you get and what this thing can do, it’s a bargain.

This Ravin crossbow is 33 inches long and weighs a tick under 7 pounds. That length is about normal as far as crossbows go, but where the Ravin R10 separates itself is in its width. It’s only 10.5 inches wide at the cams. That’s half what you’ll find on a lot of crossbows. And when it’s cocked, the spread shrinks to just 6 inches. What’s the skinny on it being so narrow? It makes maneuverability a dream. If you’ve ever swiveled inside a ground blind or in a tree stand with a crossbow, you know how limiting a wide bow can be. Compact crossbows are killer hunting crossbows.

You’d think a crossbow that’s so narrow and which has only an 11-inch power stroke wouldn’t be too powerful. You’d be wrong when it comes to the R10. This baby spits out 400-grain Ravin crossbow bolts at a legitimate 400 fps, making it one of the most powerful crossbows.

How is that possible? Chalk it up to Ravin’s revolutionary HeliCoil cam system, which allows the cams to rotate 340 degrees in launching an arrow. That much rotation amplifies the power of the unflexing limbs during a shot.

Now, to account for that much rotation, Ravin had to provide a place for the compound bow’s control cables. Ravin employed two cables for each cam – one above and one below – which coil around the axles away from the cams. This system keeps the cams perfectly level before, during, and after a shot. Level cam travel is critical to accuracy—another score for Ravin.

On top of that, the Ravin R10 has no rail. The bolt is held in place by two rollers at the point end and by the Trac Trigger Firing System at the nock end. In essence, it’s held by the string and an arrow rest – just like the most accurate compound bows in the world. This eliminates the friction created by a crossbow rail, improving accuracy and saving wear and tear on the bowstring.

The Trac Trigger is a block controlled by a nylon strap. When released from the stock, the block slides forward and captures the string in exactly the same place every time. Another key element to accuracy. Ravin’s Versa Draw System coils the strap and hauls the Trac Trigger back to the firing position as you crank the handle.

One thing I really wanted to find out about the R10 was how much – or how little – skill it took to pull one out of the box, assemble it and sight it in to drive tacks. Sure, if you’ve got access to an archery pro shop, the technicians there can do all that for you. But what if you don’t have such a place near you? What if you’re on your own and you have to start with a crossbow in a sealed box?

Full disclosure here, I do have several years’ experience working behind the counter in an archery shop, and I have assembled many crossbows. But I’d never assembled an R10 before this test, and, if anything, I think my experience helps me understand whether an assembly is complicated or not.

The R10 basically is packaged at the factory in five pieces. The crossbow itself is fully assembled. All you have to do is mount two scope rings on the Picatinny rail, then mount the scope and then screw in an accessory bracket to the underside of the stock, which holds the crank handle and the quiver. That’s it. I’ll bet it took me all of 15 minutes to have the R10 ready for the range.

The Ravin R10 scope that comes with the R10 package is calibrated by speed. The scope’s reticle has aiming points for 20-100 yards in 10-yard increments. You twist a dial on the scope to match the demarcation line with the speed of your bow, and the reticles are supposed to be properly spaced.

The information card that came with my bow stated a speed of 400 fps. That’s using the 300-grain bolts plus 100-grain points included with the package. Using Lancaster Archery Supply’s Custom Chrono chronograph, I clocked my bolts at 405, 406, and 406 fps on three successive shots. That speed keeps pace with the fastest crossbows like the Ravin R26.

So I turned the dial on my scope to the 400 mark and sat down to sight in. With the bow resting on a tripod so I could easily make adjustments to the scope if needed, I took my first shot at 20 yards. The bolt hit about an inch to the right and three inches high at 20 yards. Not bad for right out of the box.

With the crossbow resting on the tripod, I turned the scope dials to move the 20-yard aiming point up and to the right. I took another shot, and I was about a half-inch under the bull. A couple more clicks to move the aiming spot down, and my third shot hit the bull. A three-shot sight-in is easy in my book.

Next, I went outside to stretch out the shots a bit. One-shot at 30 yards required a couple clicks to move the bolt an inch to the left. After that, 40, 50, 60, 70 and 80 all fell right behind the aiming dot. And while a bench would have provided ultimate stability, I like to test how I hunt. So I shot from a chair, with the crossbow resting on my knee, just like I’d do from my tree stand.

Setup and sighting in were definitely easy. But that’s not all. It’s equally easy to cock the R10. It takes 12 pounds of force to turn the crank that draws back the Trac Trigger block. And it takes 12 full turns of the handle to cock the bow.

In keeping with the “easy operation” I keep harping on, the handle has a built-in safety feature that prevents over-cocking. Once the Trac Trigger is properly seated at full draw, the handle “slips.” The gears disengage inside the crank, so you can keep winding the handle, but the mechanism inside the stock that pulls back the Trac Trigger block won’t turn anymore. Great, simple feature that prevents damaging the crossbow.

Remember how I mentioned the price of the Ravin R10 is tasty because of what you get and what it can do? Crossbow prices jump a fair amount once a cranking mechanism is added. Well, the Ravin’s Versa Draw cocking system is not just any cranking mechanism. It’s one of the industry’s best because of its efficiency and safety features. You can pay a lot more for crossbows with crank systems that are not as advanced as the R10’s.

What the R10 Does Best

It’s easy to operate. You push a button to release the Trac Trigger, turn the crank handle 12 times and then nock a bolt. It’s really that simple. You don’t have to be particularly strong or coordinated to ready this crossbow to fire.

It’s accurate and fast. I had no trouble hitting my aiming point at 80 yards and 400 fps is screaming fast. Bowhunters of all ages and abilities will do well with the R10.

Where the R10 Crossbow is Lacking

It’s loud. Hey, there has to be give somewhere when you have a narrow bow, with a short power stroke, that launches bolts as fast as this one does. There’s just not sufficient space or material to absorb the tremendous release of energy, and so the R10 cracks. Even by crossbow standards, this thing is loud.

Technically, you can decock this crossbow by unwinding the crank while holding on to the Trac Trigger release button. But you better hold on to that handle for dear life when unwinding. If it slips, it’s going to free-spin with all the force that’s in those limbs, and it will crack you pretty good if your hand is in the way.

I like it when equipment performs up to the investment needed to acquire it. The Ravin R10 crossbow is one of the best crossbows for the money, and it’s easy to use. That’s a rare find these days.