With a strong size-to-power ratio, the Ravin R29X may be the best all-around crossbow for hunters 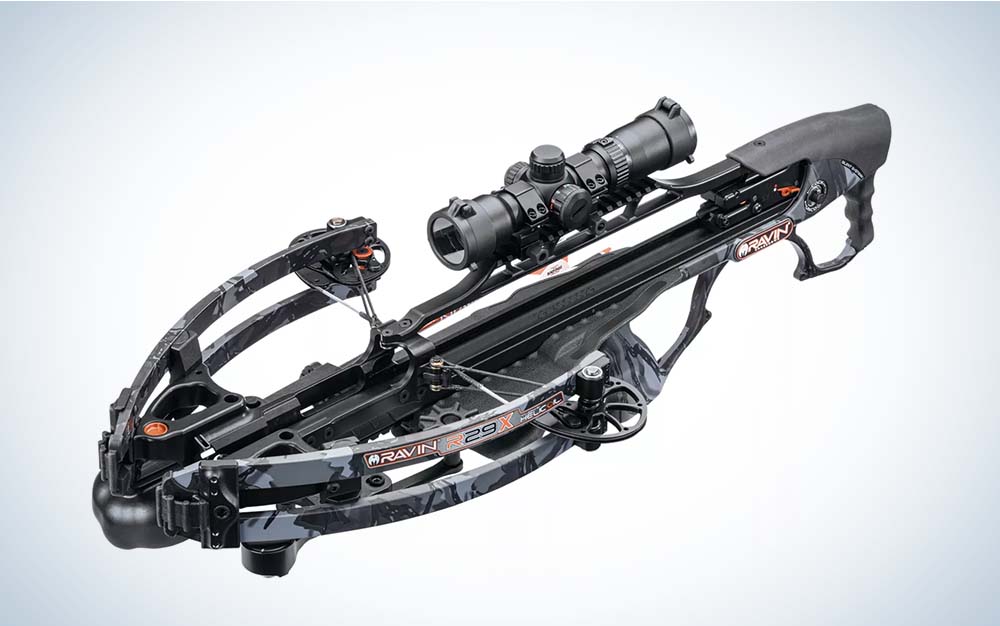 The concept of a crossbow is hardly new. It’s thought to have been invented in central Asia around 600 BC and used by the Warring States. During the Middle Ages, crossbows were so powerful that some European kings outlawed them from civilian ownership. Fast forward to the early 2000s, when crossbows witnessed a rebirth in popularity, thanks to a surplus of whitetail deer and the loosened restrictions of state game laws. Now we are witnessing a golden age of crossbow design. And Ravin, with models like the R29X, is more responsible for crossbow advancements than any other bow manufacturer.

Since this Wisconsin company’s formation in 2017, it has continually pushed the envelope to bring hunters the most powerful, compact, safest, and most accurate (although highest-priced) hunting crossbows ever. And while its R29X model isn’t its most cutting edge — that goes to its forthcoming R50 (an electrically cocked 500 fps model) — it may be the best all-around model for hunters given its size-to-power ratio.

Ravin’s R29X crossbow is a more powerful upgrade to the company’s standard R29. The “X” means it’s touted to launch a 400-grain arrow at 450 fps for 180 ft.-lbs. of bone-shattering kinetic energy. Despite this power, the 29X retains the original’s light 6.75-lb. (bare) weight and its 9-inch overall widest point width while cocked, so it remains nimble and easy to carry in the woods.

Fact is, speed sells bows in the stores, but accuracy and ease-of-use — or huntability — kills game in the field. I define “huntability” as the combination of a crossbow’s size (so it can be carried easily and maneuvered quietly in a blind) and features that make it intuitive and accurate to shoot when the pressure’s on.

About five years ago, there was a trend among crossbow companies to mold a bunch of polymer grips, design elements, and accessories and bolt them to crossbows to make it seem like the crossbow was full of features. At the very least, it might make them look cool to the untrained consumer. But I commend Ravin for stripping 29 series from most of these gimmicky cosmetics and rather leaving it with a skeletonized, bridge-style riser design machined from solid aluminum. Only the non-stress bearing crossbow parts of the body — such as the forend and pistol grip — are made of injection-molded polymer and overmolded with grippy rubber to save weight and make the bow comfortable in the hands. The fact that the Ravin R29x is among the most powerful crossbows available but also among the lightest is an indicator of the Ravin’s top-notch engineering and manufacturing capabilities. It’s plenty accurate, too. I just appreciate the no-BS, machined-aluminum design that performs, yet saves weight.

The 29x’s incredible power is owed to a combination of features, including Ravin’s patented HeliCoil eccentrics system that’s as simple as it is efficient. In a nutshell, the cams are attached to the yolk on the inside of the cam axels via a channel that coils the bus cables around the axle as the crossbow is cocked. This reduces the leverage placed on the cams and applies pressure evenly to the tops and bottoms, thereby reducing cam canting. Secondly, its cables are not continuous. Rather, they’re anchored in the center of the riser to a square metal cutout. This it allows the arrow to pass directly down the string’s centerline while not necessitating that the cables be pulled down out of the way — something that can also cause canting. The cams and thick, stubby limbs combine for a draw weight of 300 beastly pounds, delivered to the arrow via a 12.5-inch powerstroke.

The design omits a traditional barrel that the arrow typically rides upon as it’s launched. Rather, the Ravin R29X uses a dual roller arrow rest through which the vanes pass untouched. This system drastically reduces friction and therefore increases arrow speed, although it’s not entirely “free-floating” as some literature suggests. While I’ve had one of these spring-loaded roller guides break in the past, it is 99.9 percent reliable and quantifiably accurate. If a roller does break, a simple replacement can be ordered and swapped in a minute.

Ravin has also upgraded its Versa Draw cocking system by making it silent, a huge deal for not spooking game. Plus, if you decide to stop cocking at any point and let go of the handle, it’ll stay in place rather than busting you in the chops. To decock, you can crank the handle to relieve tension, then push the lever located in the back of the stock while turning the handle counter clockwise to lower the string. If you let go of the button, decocking will cease.

The Ravin R29X utilizes the company’s patented sled-like fire-control system that cocks the bow, contains the anti-dry fire device, and engages the trigger sear and safety; It’s called Trac-Trigger. With a tested pull weight of 2 pounds 10 ounces, it’s lighter than most custom rifles, and this fact no doubt enhances its accuracy. If I could change one thing about the 29X’s fire control system, however, I’d make the safety lever larger and more tactile so using it without looking or with gloves were more intuitive.

My test unit averaged 450 fps (exactly what the company claims) to produce an incredible 181 ft.-lbs of kinetic energy when shooting the provided bolts and 100-grain field points that weighed 403 grains combined. It averaged 1¼-inch groups at 30 yards. This means 2.5-inch groups at 6 yards and under 5-inch groups at 100 if the shooter’s skill is up to snuff. In my opinion, it was fairly loud at 108 decibels compared to other (often slower) crossbows, but when I experimented with heavier arrowheads a transformation occurred: With 150-grain points, kinetic energy increased to an impressive 194 ft.-lbs. Groups shrunk to 1-inch, and decibels decreased to 105. I suspect bow life will greatly increase as well.

What the R29X Does Best

The Ravin R29X is a hunting machine. It’s compact, powerful, relatively light, accurate, and most importantly, it’s easy to use.

Where the Ravin is Lacking

If this bow were mine, I’d also upgrade the 29X’s pathetic Chinese-made scope for one of higher quality. For a bow costing $2,600, what’s another few hundred bucks to invest in a quality, name-brand optic like an illuminated reticle 1x-8x-24mm unit that are now prevalent?

Does the Ravin R29X Accomplish Its Mission?

Yes, without a doubt. In addition to the top-of-the-market performance of the R29X, its small size and huntability are what I like best. Until now most 450 FPS crossbows were heavy thanks to their beefy builds and not fun to lug through the woods. But the Ravin is closer to carrying a firearm than a crossbow of just five years ago. Well-conceived features like its half-moon-shaped forend that make it easy to rest on anything speak to its huntability. An integral handle in the buttstock facilitates carry and for pulling up into a treestand. It has  studs for a sling, a storage system for the cocker handle (so you may be less apt to lose it), and it’s 100-percent ambidextrous. Simply put, the Ravin R29X is a pure hunting crossbow that also features top-notch performance. I believe it’s among the top two or three crossbows made since, oh, perhaps in 230 BC when the Qin Dynasty conquered the Hans. Nonetheless, the history of the crossbow and its evolution continues into the indefinite future because Ravin shows no signs of discontinuing its current technological conquest.