New to crossbows? Learn crossbow anatomy, and the features to look for when buying a crossbow 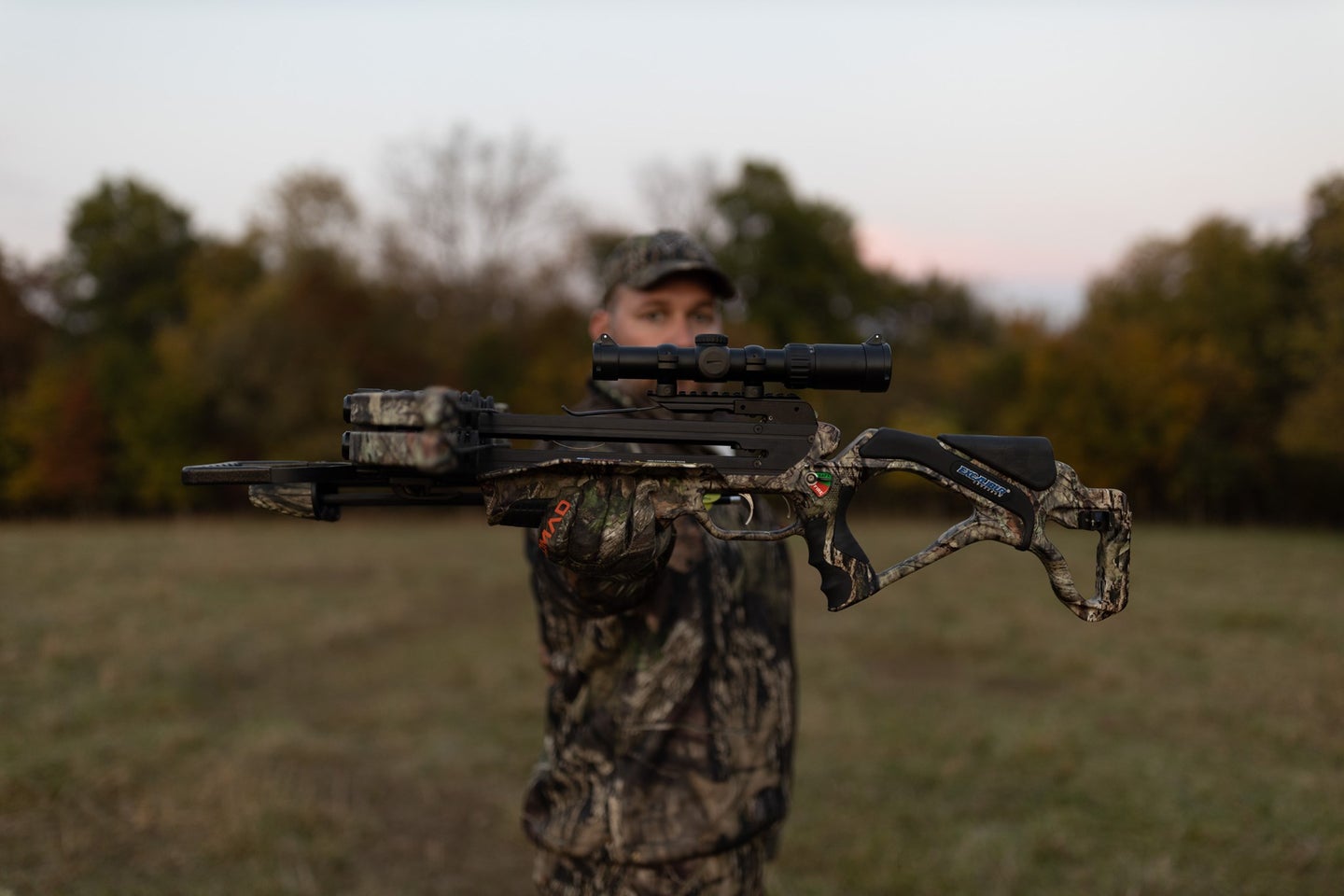 Crossbows are in hot demand these days, as more rifle hunters are heading out for archery season and as new hunters look for an easy-to-navigate road into the bowhunting game. But if you visit an archery pro shop with a good selection of crossbows, you’re going to see lots of variations of this horizontal bow that traces its roots to ancient China. We’re going to break down the modern crossbow, so you will know the crossbow parts – and how it all operates – when you head out to make your first purchase.

To start our lesson on crossbow parts we’ll go over the basic universal parts of a crossbow that are easily identifiable. There will be a bow-mounted horizontally on top of what’s basically a rifle stock. The bow can be a recurve, or it can be a compound with cams and cables.

Recurve bows are typically the most difficult to draw. Without the aid of cams to help multiply the force of the limbs, recurve designs – especially those designed for hunting – must have heavy limbs and high draw weights in order to project arrows with sufficient force to take down game. There are recurve bows on the market with draw weights of 300 pounds. Drawing these bows can be a challenge, depending on how you do it. We’ll talk about that in a minute.

Compound crossbows, like the Ravin R26, might be mounted forward or backward. That is, the bow can be mounted with the string closest to the shooter and the riser at the opposite end of the bow or vice versa. Crossbows oriented with the string away from the shooter are called “reverse draw” crossbows. They tend to be more compact than crossbows with the bows mounted in the normal position.

Crossbows will have draw weight and speed ratings. The draw weight refers to the peak amount of resistance exerted by the bow string during the drawing process. And compared to vertical compounds and recurves, crossbow weights are high – usually over 200 pounds. Because the bows are so short, they need lots of draw weight to hurl arrows. The speed ratings refer to how fast a crossbow is capable of shooting an arrow. Modern crossbows are regularly exceeding 350 feet per second, with some approaching 500 fps. The faster a bow shoots, the flatter the trajectory of the arrow.

The stirrup is a U-shaped, add-on piece – or a cutout section – at the front end of the bow, which the archer pins to the ground with a foot. Doing so allows the archer to keep the bow against the ground while pulling back on the string to cock the bow. Most have a rail, which runs down the center of the stock to support the crossbow bolt. Bolts have points and fletchings just like any other arrow, but they’re only going to measure about 20-24 inches long.

It’s critical to know what kind of nock your bow manufacturer recommends. Some companies, such as Ravin, have their own brand. The most common are the flat nock, which sits flat on the back of the bolt; the half-moon, which forms a shallow U; and the Omni nock, which is a flat nock topped by a series of ridges and valleys. Crossbows employ specific nocks to work with their firing and safety systems, so it’s critical to stick with the nock your manufacturer recommends.

The rail is the most dangerous area of the crossbow because it’s right in the string path. When the string is released, it follows the rail as it launches the bolt. Underneath the rail at the front end of the stock will be a winged piece called a finger saver. You’ll hold the fore end of the bow here as you shoot, and the finger saver makes sure your fingers stay below the rail and the string’s path.

The back end of a crossbow is where you’ll find the most similarities to a rifle. There will be a buttstock that tucks into your shoulder. At the front of the stock will be a grip that provides access to a trigger. And on top will be the mount for your crossbow scope. Today, most are sold as packages that will consist of the bow, a scope, three or four bolts plus practice points, and a quiver that attaches somewhere to the bow. Really the only thing a bowhunter needs to add to the package are crossbow broadheads. Now that you understand crossbow parts and what they do, you’ll be in a good place to learn how to shoot and buy your first crossbow.

How to Load and Shoot a Crossbow

A crossbow must be cocked. That is, the bowstring must be pulled back and held in place until released by a squeeze of the trigger. Some of the simplest crossbows out there can be cocked by hand. With the front of the bow resting on the ground and your foot in the stirrup, you lean over the back, grab the string with two hands and pull until it clicks into the cocked position. Other crossbows use a cocking rope. This is a detachable rope that wraps around the butt end of the crossbow and has two hooks at the front to connect to the string. Handles attached to the rope give you a place to grip as you stand up and pull back the bowstring.

More advanced crossbows employ cocking devices. These crossbow parts come in several configurations and looks, but the essence of each is the same. A block or set of hooks will extend from the butt of the bow and connect to the string. A handle is then connected to a post at the butt, so the archer can turn the handle, which cranks back the bowstring. The most advanced cranks are battery-powered and can cock the bow with just the press of a button.

Most crossbows today automatically put the safety into the “safe” position when the bow is cocked. They also usually include an anti-dry-fire feature, which prevents the string from releasing if there is no bolt loaded. So, when unloaded even if you flip the safety to “fire” and squeeze the trigger, the string will stay put. Anti-dry-fire is a great safety feature because there is an incredible amount of energy stored in a cocked crossbow. It’s almost certain that dry firing a crossbow – shooting it with no bolt loaded – would damage the bow, if not destroy it.

Using a crossbow fitted with a rail, you’ll notice a channel in the center of the rail. When you load a bolt, you will slide the odd-colored vane on your bolt in that channel all the way back to the string. Crossbows without rails will have specific loading instructions to suit their functionality. With a bolt properly loaded in the crossbow, you can now move the safety into the firing position, just like you would on a rifle. Squeeze the trigger, and the string is released, and the bolt is launched.

So let’s say you spent all day bowhunting with a loaded crossbow, never got a shot opportunity, and now it’s time to go home. Manufacturers recommend against leaving a crossbow cocked for days at a time because of the stress that maintains on the limbs. With most crossbows, the only way to unload it is to shoot it. So bowhunters will shoot into a crossbow target when they get home, or they’ll carry a special bolt designed to allow them to point the bow at the ground and shoot the blunt-headed bolt into it. Some crossbows are designed so you can decock them simply by going through the cocking process in reverse. Ask about that when you’re buying a new crossbow so you’ll know what’s required.

Tips for Buying a Crossbow

So what are some important bow factors to consider as you are weighing a purchase? Definitely think about how you want to cock the bow. Do you have the strength and coordination to draw 270 pounds by pulling on a rope? Or does a crank make more sense?

Some crossbow enthusiasts simply like the look of a recurve crossbow. Those bows definitely look more ancient than the modern compounds. If you are able to cock a recurve crossbow and you don’t mind how wide they are, by all means, take that route. They have the power to take any game you’d hunt with a compound crossbow.

Do you plan to hunt from a ground blind or tree stand, where your movements might be limited? If so, a narrow crossbow might be the best choice. You’ll find bows that are 20 inches wide before they are cocked, and others that are 10. If maneuverability is going to be an issue for you, then take that into consideration.

Will you be able to discharge your crossbow at the end of a hunt? Do you have a place and the gear to take a shot with your bow? Or would you rather decock it without shooting? If you’d prefer the latter, then make sure the bow you buy has the decocking feature.

They might look daunting, but today’s crossbows really aren’t that complicated once you know what you’re looking at. And it is true that the learning curve to become proficient with one is much gentler than it is with a vertical bow. Choose your bow wisely, and you’ll be punching tags in no time.