Long-term impacts on fish and wildlife are unknown 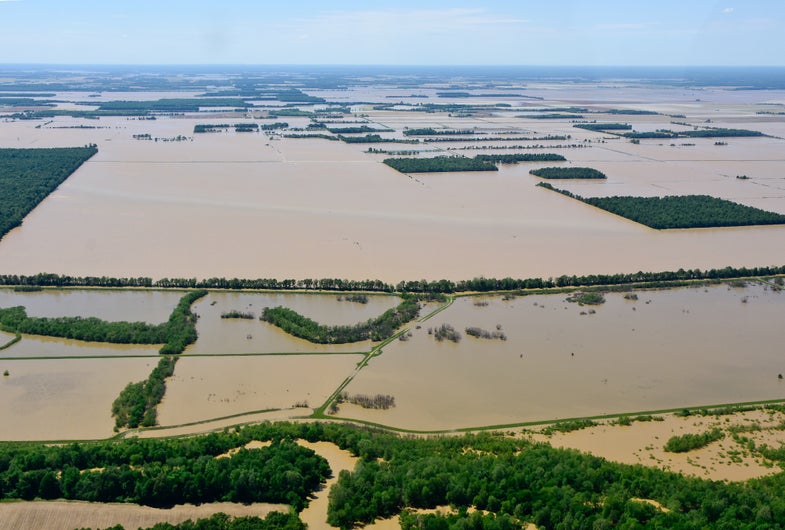 Across the Missouri Ozarks, and now creeping into suburban St. Louis, record floods have decimated homes and businesses. Small mountain towns like Van Buren, Doniphan, Eminence and others are facing a long road to recovery after a natural disaster of this magnitude. Of course our hearts and minds are first with the victims and the communities so dramatically affected, but those of us who frequent the Ozarks often to enjoy bountiful outdoor opportunities have to wonder what this devastating flood means for fish and wildlife?

Much of southeastern Missouri consists of a wildlife rich landscape with crystal clear rivers and streams coursing through a vast canopy of forest. Under normal conditions these Ozarks waterways, like the Current, Jacks Fork, Eleven Point, North Fork, Black, Big Piney, Gasconade and Meramec rivers, flow along at a pace perfectly suited for paddling a canoe with a fishing rod always at the ready. However, after record rains these normally peaceful waters turned into deadly torrents destroying nearly everything in their paths this past week, leaving fish and wildlife dead or displaced, and resorts and outfitters without answers for customers asking when the region will be ready again for visitors.

Conservation Officer Brad Hadley, who’s assigned to Shannon County, one of the hardest hit areas, said after many long hours of working evacuations and other priority missions, he stopped to catch his breath for a minute when he noticed a drowned mole in the middle of the road.

“That’s when it hit me,” he said. I had been so busy worrying about people; I had yet to think about how hard this event is going to be on elk fawns, deer fawns, bear cubs and turkey nests.”

Hadley said fishing is surely going to be effected, too. At Montauk State Park, he worked with a crew that filled the bucket of a John Deere front in loader twice with dead trout to keep them from clogging up drains.

“Imagine fighter jets swooping through and annihilating everything in their path. Vegetation along the rivers is wiped out in certain stretches. But if you’re looking for a positive, storms like this kick start regeneration of the ecosystem. Floods like this one may only happen every 75 years or more, but they start the system over and that is healthy. It removes old sediment and loads up new shelters and biomass, which is good for species like the Ozark Hellbender, an endangered species. So while it’s hard to look to the future right now, ultimately fish and game will benefit from the floods,” Hadley said.

“This is going to be really bad for turkeys. There was a lot of nesting going on already,” said notable Missouri turkey hunter Ray Eye. “I’m not a biologist, but I’ve seen the effects of flooding before, I’ve just never seen anything like this flood. There is no question that tons of turkey nests were taken out. Hopefully some hens will nest again, but it’s going to hurt for years.”

Impacts on hunting and fishing have been immediate. The Ozark National Scenic Riverways is closed. The website states: “Due to heavy rains and flooding, Ozark NSR is officially closed.” Meaning there is no floating or fishing on the sections of rivers making up the park. Mingo National Wildlife Refuge has closed the property to turkey hunting for the remainder of the season, and many other prime public lands are currently too flooded to turkey hunt.

Yet, if we know anything about the Ozarks, we know this is tough country full of tough people. There is no doubt the locals will have the area cleaned up and ready to go for the annual onslaught of visitors who arrive every summer to enjoy the natural splendor of the region. Only this year, it may look a little different. The region’s economy thrives on tourism, and if ever there has been a year when tourist dollars are needed, it’s this year. So if you’re looking to plan trip for this summer or fall, consider visiting the Ozarks and helping one of America’s premiere outdoor destinations recover from a devastating natural disaster.