3 Archery Tournaments Where You Can Compete With the Pros

So, you think you can shoot? Test your skills against the best at these archery competitions 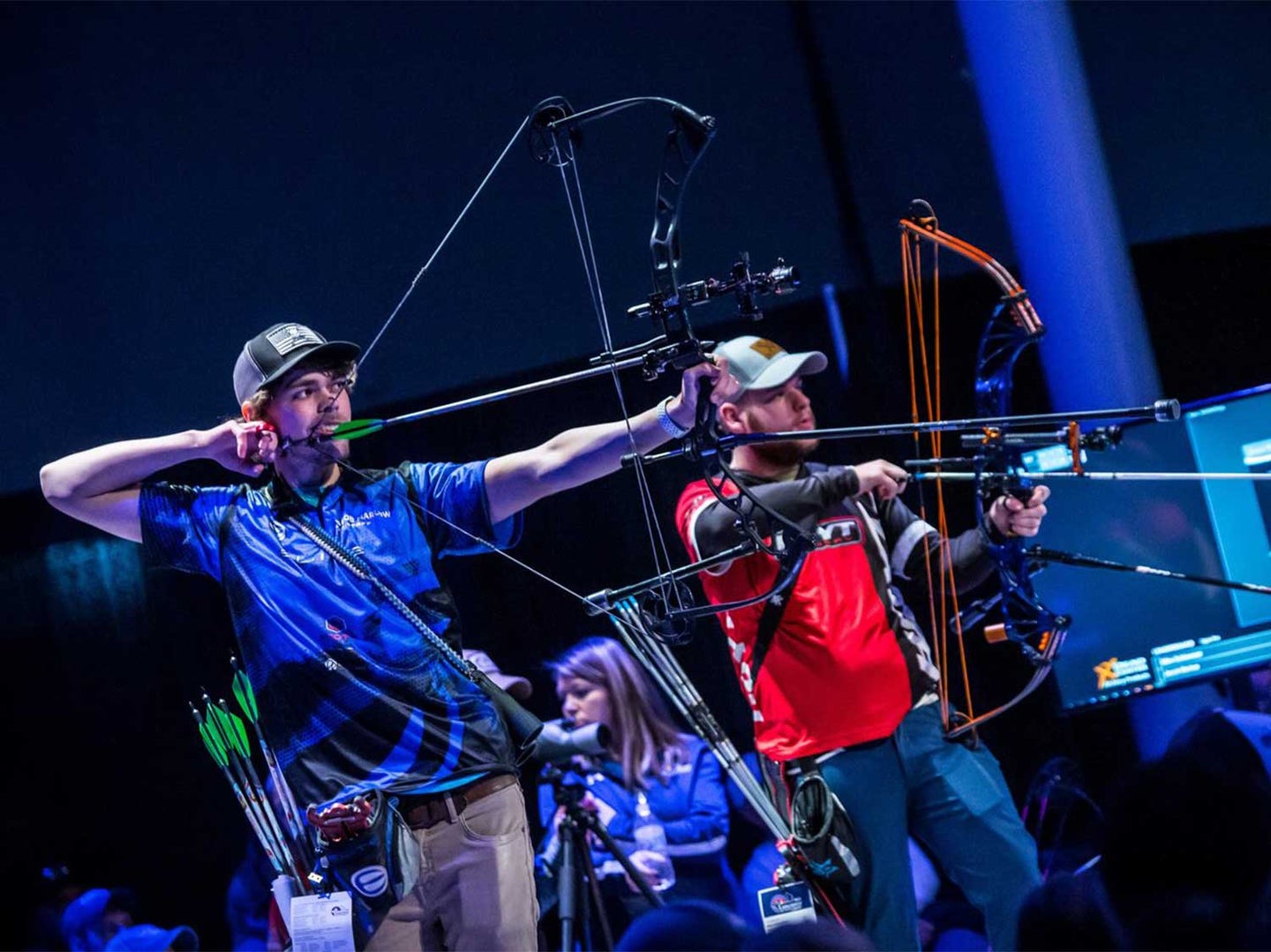 I’m the undefeated champion of my backyard. I’ve shot ridiculous scores and tiny groups steps from where I grill venison. If your Instagram has dozens of pictures of your awesome groups and you’re tired of beating your friends every weekend, then you might be a backyard hero like me. But, are you as good as a pro archer?

One of the coolest things about archery is that there are opportunities for anyone to shoot with the best. Like walking onto Lambeau Field and catching a pass from Aaron Rodgers or shooting hoops with Lebron James, you can sign up for a tournament and shoot right next to pros like Levi Morgan or Jesse Broadwater.

Alex Wifler made a big splash his first year as a professional, and he gave us the lowdown on what it takes to compete at archery’s highest level.

The Vegas Shoot is often called the Super Bowl of archery, and if you’re lucky enough to attend this tournament, you’ll see exactly why.

Wifler, won this prestigious event in his rookie year. “I think why it’s on such a pedestal is because everyone is shooting at their prime and everyone is there,” he says. “It’s what you work for all year.”

Thousands of archers compete each year for hundreds of thousands of dollars in prize money. The main event is the open championship division, where the best of the best compete for $53,000 in prize money and much more in manufacturer contingency. The winner can bring home six figures in combined winnings—not a bad weekend in Vegas.

To enter the tournament, you must register by the January 20 deadline, and pay the $500 entry fee. If you don’t want to compete in the championship division, there are 25 other divisions including youth, bowhunter, barebow, crossbow, and Olympic recurve divisions. *Entry fees and payouts vary.

The tournament takes place inside the South Point hotel, and there’s more than just shooting at the Vegas Shoot. You can visit an archery trade show where all the latest gear is on display and enjoy all the entertainment that Vegas has to offer. You’ll also have plenty of time to do more than just shoot because during each of the three days of competition you’ll only shoot 30 arrows for score, which takes about two and a half hours.

To stay in the running for the $53,000 prize, each of the 30 arrows must land in a 10-ring about the size of a quarter, 20 yards away, for a perfect score of 300 each day. After three days, this adds up to a total of 900 points. Shooting a perfect score once is hard, but three times in a row is an intimidating task even for the best professionals. The last arrow is usually the most nerve-wracking, and the difference between an 899 and a 900 is like the difference between hitting a triple and a home run. Close, but no cigar.

“Take it one arrow at a time,” Wifler says. “You can’t shoot a 900 unless you’re focused on shooting each arrow individually. You have to make one good shot at a time and just let it happen. That last arrow can be daunting, but all you have to do is shoot the same shot you did the last 89 times. You can’t let it be any more important.”

Once you’ve successfully shot a 900, you’ll be in shoot-off with the other archers that shot perfect scores. That number of archers varies, but at the 2019 Vegas Shoot, 24 of the 267 competitors made the final shoot-off.

During the shoot-off archers line up and shoot one “end” of three arrows at the same quarter-sized 10-ring in a last-person-standing format. All those that tie stay in and anyone with a lower score is out. Those with the top scores keep shooting until one person remains. Usually, most of the archers will remain perfect through this first round, but the next round gets more interesting.

The ten ring switches to the small inner X-ring, which is about the size of a dime. Once this happens, the field gets thinned out pretty quick. After a few rounds, there’s usually only a handful of archers that remain. At this point, archers that seemed unshakeable start showing signs of the intense pressure.

“The adrenaline is unbelievable, everything you do is hypersensitive,” Wifler says. “You have to fall back on your process in those moments.”

Winning the Vegas Shoot is a huge payday, but it also writes your name in the archery history books amongst the best of all time.

Amish country might be known for handcrafted furniture and whoopie pies, but archers know Lancaster, Pennsylvania as home to one of the largest indoor archery tournaments in the country.

“If you’re going to do a pro-level tournament, Lancaster would be the best one to start with,” Wifler says. “It’s one of my very favorite tournaments that I go to.”

He recommends Lancaster for new pros because it’s a well-run event that has an exciting format. The Classic uses the same 40 cm target as the Vegas Shoot, but the target’s innermost “x-ring” is worth 11 points. The surrounding rings go from 10 points down to six points, for compound competitors. Archers shoot 60 arrows the first day for ranking.

After the ranking round, the archers in the open pro class with the top 64 scores move on to head-to-head matches. These are single-elimination matches, and the highest-scoring archer of 12 arrows gets to move on. The losers become spectators.

Once the field is narrowed down to eight, the format switches to a shoot-up. The eighth-ranked archer shoots against seventh, the winner of that match moves on to face the sixth-ranked archer and so on. During the shoot-up, archers stand on elevated platforms and shoot in front of a crowd as well as live broadcast cameras—all while being interviewed by the tournament organizer Rob Kaufhold. The environment takes normal tournament nerves and turns them up to 11.

“To say that it’s hard to win is an understatement just because of all the pressure they put on you,” Wifler says.

During these head-to-head matches, anything can happen. Seasoned pros will visibly shake and even completely miss the target. But even though crazy events can happen, these pros still shoot near perfect scores, so you better bring your A-game.

Just like Vegas and Lancaster, this tournament is shot at 20 yards (18 meters) and uses a 40 cm target. The rings score 1 to 10 points, with 10 being the innermost circle. Vegas uses the “big 10,” which is the 10 ring for recurve archers in USA Archery. Compound archers shoot a 10 ring that is 2 centimeters in diameter, making it a little larger than a dime. USA Archery indoor competitors shoot three arrows per “end,” and 60 arrows each day of the two-day event.

This is the USA Indoor, so you won’t have the international competition you find at Vegas or the Lancaster Classic. However, you’ll compete against big-name pros and plenty of fierce competition. It’s not uncommon to see near-perfect scores with top finishers only missing a handful of 10s throughout the tournament. The results from each location are pooled, and the top eight finishers are invited to compete in the final shoot-off.

The shoot-off takes place during the NFAA Indoor Nationals in Louisville, Kentucky where the eight archers are placed in a bracket and shoot in single-elimination matches. In this bracket, the top-ranked archer shoots against the eighth-ranked, number two shoots against number seven and so on. It’s like the “elite eight” in March Madness. The person that stays undefeated throughout the bracket will earn the title of national champion.

While there’s a paycheck that comes with the title, being a national champion is the real award. If you pull off the win, you’re not a backyard hero anymore. You’ve officially entered the realm of the elites.

What Separates Pros from the Joes?

What’s the difference between someone that can shoot great at home versus someone that shoots great on the big stage? In the backyard or at the local range, there is little to no pressure. At these major tournaments, there are thousands of eyes on you and thousands of dollars on the line. It’s like repeatedly making a perfect shot on a dream buck that has quarter-sized vitals.

“The biggest thing that separates the amateurs from the pros is mental management,” Wifler says. “You have to know what you are thinking about every single second you’re on the line.”

What’s going through a pros mind?

“I’m thinking about what I want to happen, then I draw back the bow, put the pin in the center, I’m saying my phrase, and my shot breaks,” he says. “I’m focused on letting the shot happen and being as smooth as I can. I let the outcome be what it will.”

Even if you’re not ready to shoot against the pros, competition archery is the best way to improve your shooting. It’s also a lot of fun! To get started, shoot a local tournament and see how you like it. Then register for one of these major tournaments and to determine how you stack up against elite archers.