How to Icefish for Panfish Like a Pro this Winter

Load up on first-ice panfish 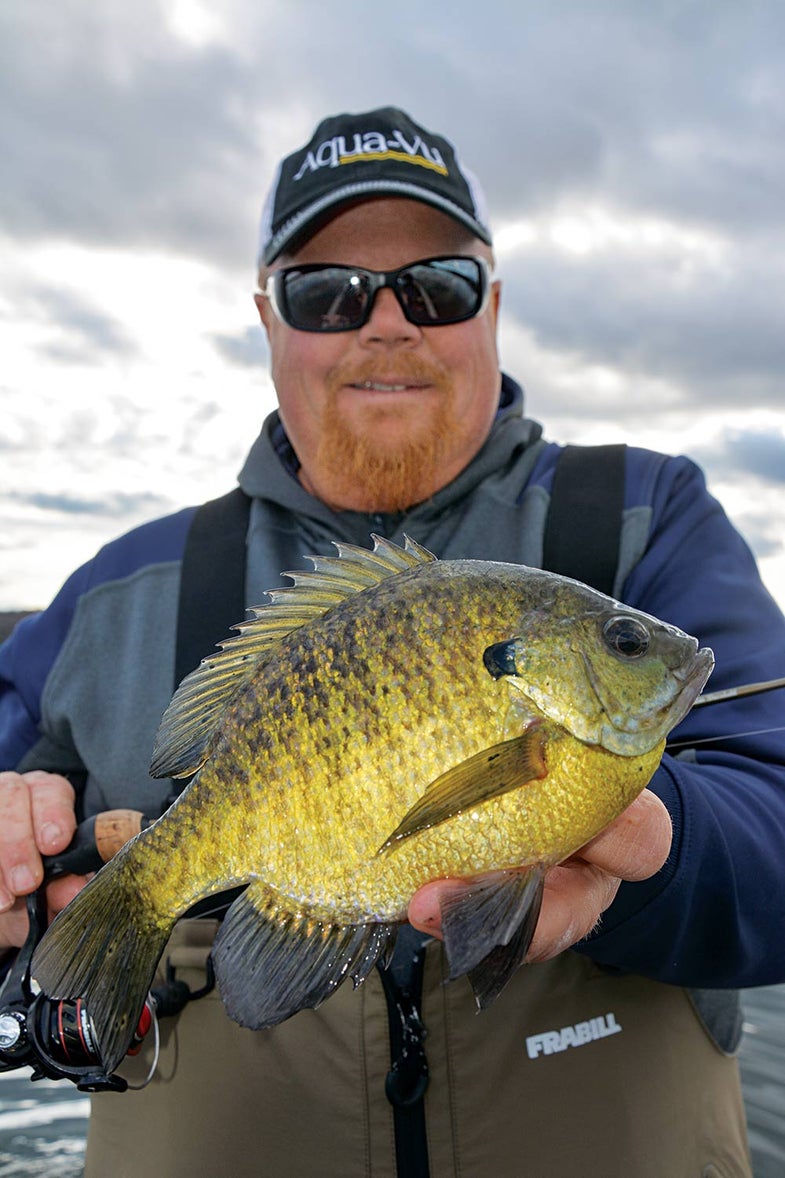 The morning began for Brian Brosdahl as most of his winter days do—drilling holes through the freshly frozen surface of a lake’s deepest spot. Although he’d never seen this particular lake before, the fish-finding methodology was sound. He continued drilling from the 19-foot-deep basin back toward the weed line, and when Brosdahl was finished, he dropped his sonar in the first hole.

“It lit up like a Christmas tree with trophy crappies and big bluegills,” says Brosdahl.

“In golf, you would call that a hole in one,” he says. Soon, fish after fish began to hit the ice.

Neither luck nor chance played a role in Brosdahl’s success that day. It’s just part of his proven, almost regimented hard-water strategy for finding and catching big bluegills and crappies—one that weekend warriors don’t quite ever figure out.

Get Down and Dirty

“To find big panfish, you need to locate a deep basin near their summer weed beds,” explains Brosdahl. It is all part of a rather ordered seasonal movement of fish—a migration to deeper water that begins in late summer and continues through early fall once the vegetation starts to die off or thin out. The fish remain in these deep-water haunts throughout the winter. But not all deep-water basins are created equal. Hard bottoms are generally not rich in forage, and silty lake beds are too soft. Mud is best—sticky mud that is composed of decaying matter attracts invertebrates, such as bloodworms, zooplankton, mayfly larvae, and freshwater shrimp. All of these critters are food sources that will attract not only baitfish, but also panfish.

Technology can be helpful if you are exploring new waters. Brosdahl notes that an underwater camera, such as an AquaVu, allows you to look for bloodworm tubes. Turn the setting to infrared and you can see larvae and shrimp darting through the water column. Both are good signs. At night he will use his flasher to look for a band of static rising from the bottom, which indicates invertebrates.

“If there are clouds of minnows, key in on them,” he says. “Lots of minnows means it’s a good place to be.”

Read Next: The Art of the Tip-Up in Icefishing

Most anglers think that finding the fish is the hard part; the catching—at least as far as panfish are concerned—is simple. Not so fast, says Brosdahl, who warns anglers not to blow the school up by dropping their bait into the fish. Instead, he recommends finessing the bait 1 to 2 feet above them.

His favorite bluegill and crappie lures are Northland’s Gill Getter, Mudbug, and Tungsten Fireball Jigs in sizes 12 and 14. He will tip the jigs with Northland’s Impulse Skeleton Minnow in Bloodworm Red.

“My jigging stroke is more of a nervous twitch,” says Brosdahl. “Only the tail is moving.”

Experiment to get the twitch right. If you can get them to rise to your bait without spooking the school, it’s game on.