Forget Boats—Bowfishing on Foot Is Cheap, Fun, and Easier Than You Might Expect

Wade and bank bowfishing can be surprisingly effective, and a ton of fun 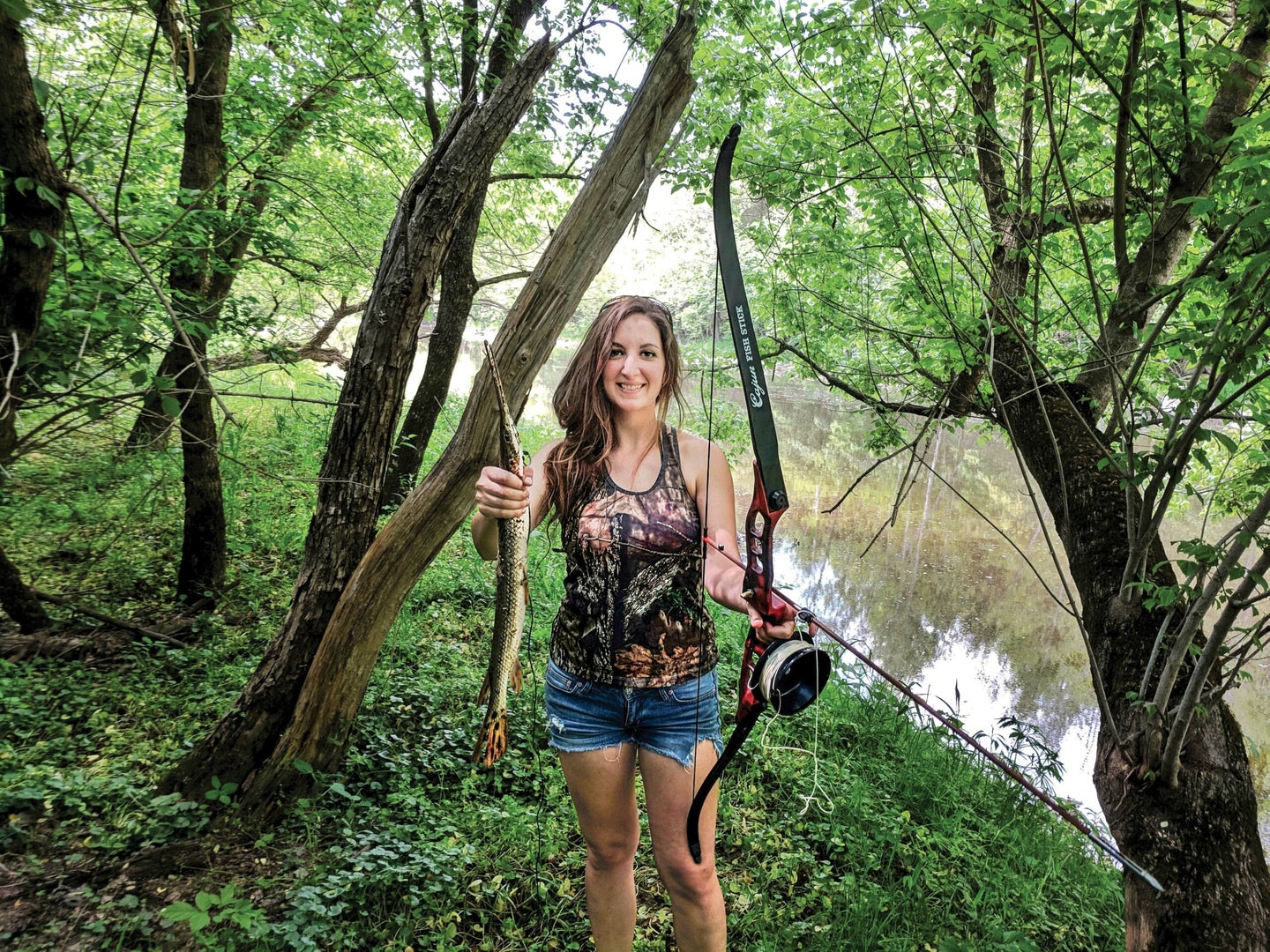 Beka Garris, with a gar shot from the bank. Courtesy Beka Garris
SHARE

To the uninitiated, bowfishing may seem like the latest gear-intensive fad. Its popularity has surged in recent years thanks to TV shows, social media, and the rise of its most popular target: carp. But at its core, bowfishing is a minimalist pursuit that’s been around for millennia.

“I used to be a bass fisherman,” says Scott Cobbs, owner of Copperhead’s Outdoors near Huntsville, Alabama. “I had a Ranger bass boat with all the bells and whistles, and I thought, Aw, this is the stuff. Then I started bowfishing. I sold all that stuff. It’s a really an adrenaline-filled game. Fighting a 50-plus pound fish on an arrow is hard to describe if you haven’t been there.”

To bowfish like Cobbs, you don’t need an expensive bow or a platform decked out with stadium-bright lights, or even a boat. You just need a recurve or compound with a reel, a barbed arrow, a little stealth—and to put your catch-and-release principles on the back burner.

▶ After checking your local regs, you have a few options for finding fish. Beka Garris, a diehard bowfisher from Ohio, recommends referencing your state’s freshwater lists to quickly determine which bodies of water hold carp and other rough fish. “Call your local DNR and ask. Trust me, they’re wanting to get rid of these fish,” says Josh Noble, president of RPM Bowfishing. “It’s not like you’re trying to chase a 400-class bull elk or a 200-class mule deer. They’ll tell you exactly where to go, exactly what time they saw fish, and give you coordinates.”

Noble also recommends calling your state’s bowfishing association for guidance, because, unlike any other kind of fishing, it’s acceptable to ask folks where they shoot fish. Look for lakes, reservoirs, dams, rivers, and streams with good access. In Alabama, Cobbs says he has the best luck with small feeder streams and shallow, backwater sloughs.

“Everybody loves clear water,” says Cobbs. “But in my experience, very clear water holds less fish. I prefer to have stained water—­somewhat tannic. You can still see, but the fish are comfortable there.”

While gar are more commonly found in running water, carp love to congregate in dirty, muddy areas. You’ll also often find carp in the inlet side of reservoirs where freshwater flows in around structure. Structure is key, too, so note logs, rocks, and root wads along banks.

Noble started shooting carp with a recurve and drum reel when he was six, working along Utah’s Bear River with his dad. He says bank fishing can be equally as productive as boat fishing—it just requires a little more physical effort.

“You can be much stealthier on the bank than you can on a boat,” Noble says. “Bank fishing is a lot like jump-shooting waterfowl in that you can use binoculars and you can see the ripples or a pod of fish in the water. These fish can feel vibration, and they can see you, so once you spot them, walk with super-soft feet. You’ve got to sneak up to the edge and be stealthy. It’s an absolute kick in the pants how much fun it is.”

Keep a low profile and crouch behind cover as you approach. Once in range, Noble will wait behind a bush, then draw and shoot as he steps out. If you’re fishing a transitional area, like a dam or a water-control structure, simply park yourself on the edge and shoot fish as they pass. Keep the sun at your back, and wear polarized sunglasses for better visibility. The only additional gear you’ll need are an extra arrow or two, and a stringer for your fish.

If you want to bowfish from the water (which holds extra appeal during the hotter months), you’ll have to be even stealthier.

“Wade-fishing is just a patience game,” Noble says. “Work at a snail’s pace, bumping fish with your feet and shooting them as they spook.”

Cobbs, who likes to bowfish with his buddies, says speaking and even yelling (“Hey, over here!”) doesn’t bother fish much. What’s important is how you move. “Disturb the water as little as you can,” he says. “Ease along and keep the ripples and splashing to a minimum. If you make a big splash or crack a stick that’s submerged, you’ll scare fish.”

If Cobbs finds a school, he and his buddies will often count down together to take their shots simultaneously. They like to target big grass carp, which can often be found finning in the shallows, their tails poking above the water. The pressure you put on an area depends in part on your stealth and on the species you’re targeting, though Cobbs says environmental factors—temperature, rain, barometric pressure—seem to affect fish more than human pressure.

“Carp are kind of stupid, and will come back in a few minutes after you shoot,” Garris says, noting that gar are more skittish. “Grass carp are actually pretty territorial—I’ve stood for 45 minutes in a specific area because I was waiting for one particular fish that was really big.”

For the seasoned bowfisher, sticking big fish is what it’s all about. And you can’t practice either.

“You can tell somebody how to aim—to aim low,” Cobb says. “But you really can’t practice. Just go shoot fish.”