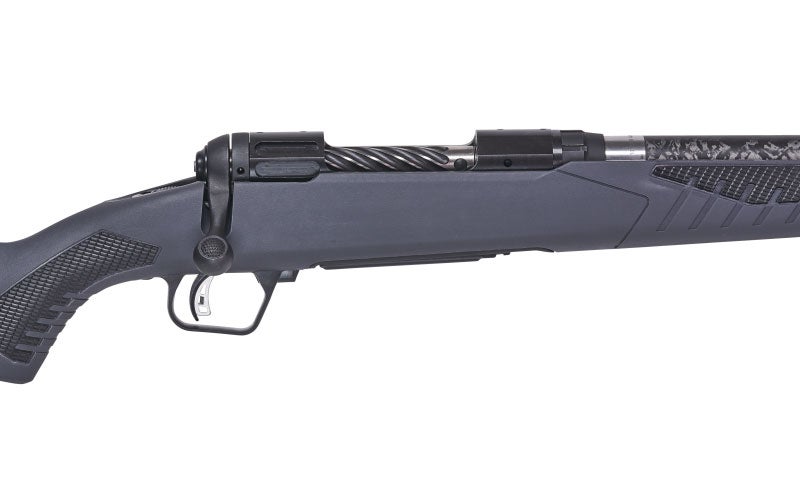 The Savage 110 action was slimmed down for the 6-pound (or less) Ultralite model. Savage Arms
SHARE

When it comes to hunting rifles, more and more gunmakers are looking to slim down their guns. This coincides with a rise in popularity of backcountry, walk-in hunting, backpack hunting in recent years. Another possible driver is the increasingly diverse makeup of hunters. Or, it could simply be that carrying a light rifle around in the mountains and woods is just plain more enjoyable. Whatever the reason, more rifle companies have been turning their efforts toward producing truly lightweight, standard-production hunting rifles. Cutting weight is nothing new to seasoned mountain hunters, but many weight-cutting features were only available on custom built or assembled rifles. Not so anymore.

Meet the Savage Model 110 Ultralite which, depending on chambering, weights between 5.8 and 6 pounds. The Savage Model 110 has always seemed to punch above its price range when it comes to accuracy, but the guns haven’t ever been very lightweight. You’re average short-action, standard-weight barreled Model 110 will come in at around 7.5 pounds give or take, and that’s without rings or a scope. There was a time when this wasn’t considered heavy; those days are over. Savage was able to cut the fat from its standard 110, and has brought to us a functional mountain rifle that isn’t best-in-class light, but is plenty light enough to get in the game.

First, we must talk about the barrel. Yes, that’s a Proof Research, carbon-wrapped stainless steel barrel. A totally new feature for the 110 line, Savage put Proof’s well-reputed, carbon-wrapped barrel on this model. They are known to be consistent and accurate, and the carbon wrapping allows the barrels to take advantage of the properties of a larger-diameter barrel, while being much lighter and cooling more quickly than an equivalent steel barrel. Barrel lengths are 22 inches or 24 inches depending on the chambering, and they all come threaded in 5/8″ x 24 and ready to accept a suppressor or muzzle brake.

The barrel is a very notable feature, and certainly saves weight, but it can easily distract from where much of the weight was actually cut: the stainless steel action. The standard Model 110 action is pretty thick and beefy. This isn’t a bad thing, but in reality, there is a lot of material that doesn’t really need to be there. It’s shocking to compare the Ultralite action directly to a standard 110 short action. You’ll immediately notice that excess steel has been milled off of the rounded 110 action, leaving a flat-sided action that is much sleeker. Further, unnecessary metal has been milled out, giving the action an almost a skeletonized look. Fluting of the bolt also cuts weight and reduces bearing surface area, aiding in a smooth action. The action itself is stainless, but is coated with a weather-impervious melonite finish, and the trigger group is, of course, Savage’s proprietary AccuTrigger system. It’s an easily user-adjustable trigger that can be set to break at anywhere from 1.5 to 4 pounds of pressure.

The stock is a relatively standard synthetic with rubberized overmolding on the fore end and grip, but includes Savage’s AccuStock adjustment kit. The user can adjust both comb height and length of pull to attain the best personalized fit for more comfortable shooting. The stock isn’t full of frills, but it is a much better make than other Savages I’ve hunted with throughout the years. I’ve always felt like Savages were consistently great-shooting rifles with unfortunate stocks, but that isn’t the case here. They’ve greatly improved.

Finally, the rifle is fed with a detachable box magazine. Although I much prefer top-loading models, I had no issues with the feeding, reliability, or ease-of use of the 110′s magazine, aside from possibly being another avenue of weight reduction in the future.

Although I received one chambered in 6.5 Creedmoor, Savage is offering a good variety of chamberings in both short and longer actions. You have the standard .308, .270 WIN, .30-06, and .300 WSM, the 6.5 Creedmoor and 6.5 PRC, as well as the 28 Nosler and 280 AI. I’m a firm believer that each rifle makes up its own mind when it comes to the ammunition, bullets, and loads that it likes to shoot. I tried a variety of different loads and had best results with the 130 grain Barnes TSX load from Federal Premium. It would reliably print MOA 3-shot groups, and was perfectly capable at any reasonable hunting range. Whatever chambering you pick and barrel your happen to draw, you’re certain to find a load that it loves.

The rifle handled well. I took it caribou hunting this fall and killed a bull at about 350 yards with it. I suspect the 110 Ultralite needs more refinement before it’s accepted as a true, specialized mountain rifle, but that classification is as much about snobbery as performance. Perhaps it would be missing the point entirely to assume that’s the goal here. For all of their glamour, most ultralight mountain rifles have plenty of faults. With pencil-thin barrels, they’ll commonly start losing accuracy within five rounds. Those barrels take a painfully long time to cool. With any sort of sustained shooting, the Savage’s Proof barrel will outshine most purpose-built ultralight rifles. This isn’t to say that the rifle doesn’t belong in the mountains chasing sheep and goats, either. I’ve toted much heavier irons over the years, and would depend on this rifle for a once-in-a-lifetime ram hunt with no qualms. It would be a very suitable rifle for the mountain hunter who wants an all-around rifle, or frankly anyone who doesn’t want to pack around a heavy one.

Coming in at around $1,500, it’s more than your average Model 110, but rolls in equal or less expensive than just about any competitor in its class. There is always more progress to be made, but Savage made a big jump forward with this model.