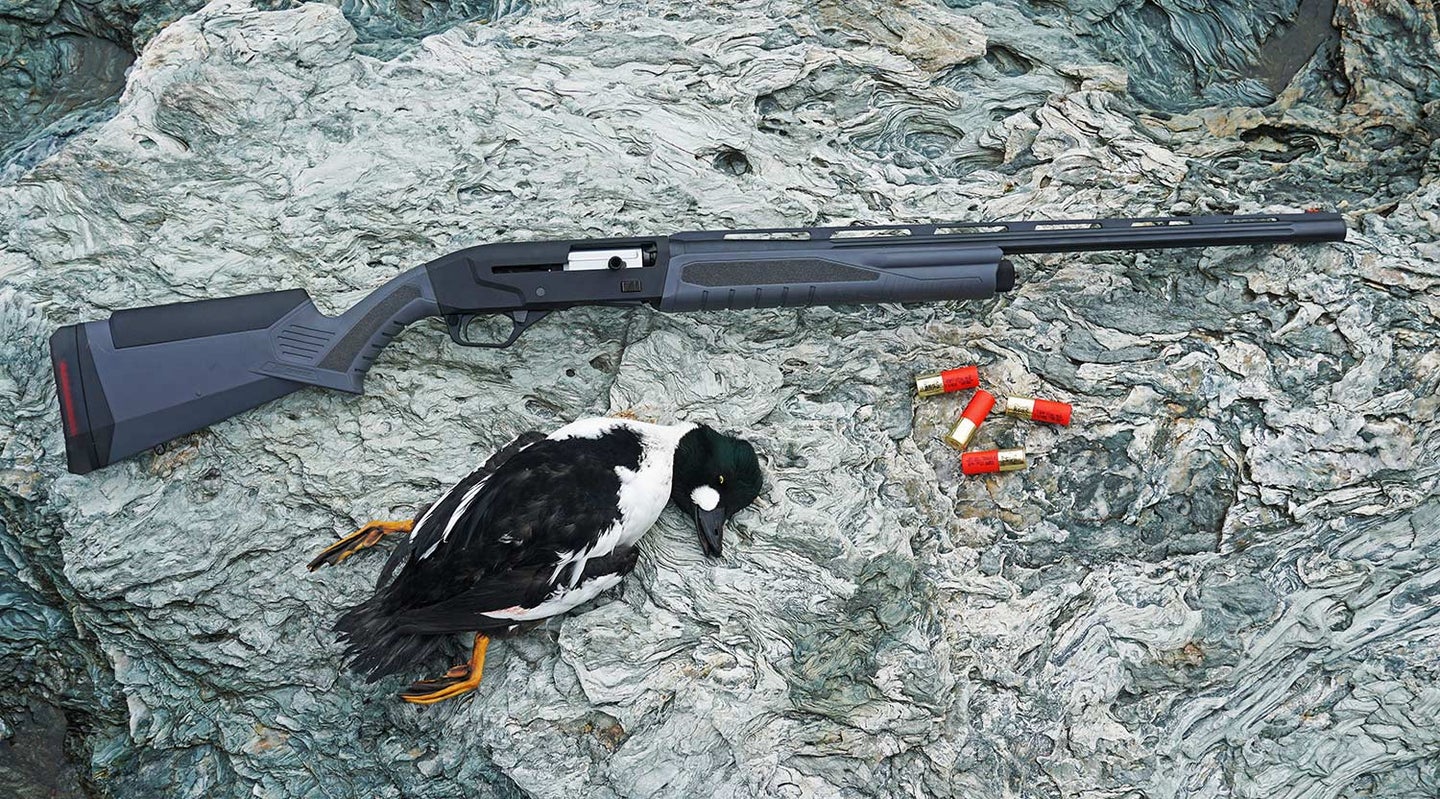 The field version of the new Savage Renegauge during a hunt in Maine. Alex Robinson
SHARE

Seven years ago, Savage set out to build a semi-automatic shotgun that would handle well and function flawlessly with both light target loads and magnum loads. Also, the gun could be neither offensively heavy nor overpriced.

“I killed the project three times because the cost was too high and the gun was too heavy,” says Al Kasper, Savage’s president and CEO.

Eventually, engineer John Linscott—the lead engineer behind the A17—took over the project. He designed a patented dual-valve gas system (more on this later) and fluted the shotgun’s barrel, which reduced weight by 10 percent. So now, at 7.9 pounds (in the 28-inch barrel version) and with a MSRP of $1,449, Savage is bringing its Renegauge to market.

I got to field test a pre-production version of the gun on a December sea duck hunt in Maine before meeting with the engineers at Savage’s factory in Westfield, Massachusetts, where the gun is being made. The Renegauge pointed beautifully on eiders, longtail ducks, and divers, it ran Boss 2 ¾-inch No. 5 shells without fail, and it handled hard-recoiling 3-inch Remington Hypersonic No. 2s without bruising our shoulders or cheeks. The synthetic stock and Melonite-coated barrel (inside and outside) sustained three days of abuse in the saltwater without showing any rust or wear. Here’s a closer look at this futuristic shotgun.

The fore-end of the Renegauge has a slight bulge on either side of the barrel, which houses a patented drive system, which Savage is calling a Dual Regulating Inline Valve, or D.R.I.V. Some characteristics of this system are familiar. Like any gas gun, it uses gas from the fired shell to power a piston that drives the bolt carrier rearward, causing the next shell to cycle. What’s interesting about the Renegauge’s design is that it has two valves that vent excess gas that’s not needed to run the action. Savage engineers opted for a two-valve system because it vents gas faster than a single valve. If you look at the fore-end straight on, you’ll see the two circular valves along the barrel.

The benefit of this design is that, with every shot, the same amount of gas is taken in to cycle the bolt, whether you’re shooting light target loads or heavy magnum loads. Savage says this leads to fast and consistent cycling. With loads under 1,000 fps, the system uses all the gas to run the bolt, which means no excess gas is vented. With loads over 1,000 fps, the valves release any excess gas. This system is not user adjustable by design. The Renegauge will run any load you feed it, without any need to adjust the D.R.I.V. system, says Savage engineers.

Savage fans will recognize the Renegauge stock as a version of the AccuFit stock the company uses in many bolt-action rifles. The gun comes with three different recoil pads for length of pull adjustment, and three different cheek pads for comb adjustment. The gun also comes with shims, which when combined with the cheek and butt pads, allows for 20 different variations. In reality, most hunters don’t actually use shims to fine tune the fit of their gun, but that’s what’s great about the AccuFit system: it’s super quick and easy to use. You can swap out cheek pads without unscrewing anything. Simply peel off the pad and pop in a different one. (This will be especially useful in the turkey-specific model for hunters who need a little extra comb height to see through a red dot sight or scope.)

This stock configuration, along with the shotgun’s overall balance (which is slightly forward-weighted), gives the Renegauge an almost rifle-like feel. That is to say, the gun pointed nicely and held on target well. This was especially noticeable when finishing cripples beyond the decoy spread from a rocking boat. It’s a hefty gun, and would be a bit much to lug around on a long day of upland hunting, but that weight makes for a smooth-swinging shotgun that’s ideal for a duck blind or goose pit. It should be a killer turkey gun, too.

It’s hard to fully evaluate a shotgun in only three days of hunting. (Also, keep in mind that I hunted with a pre-production model.) But one of the things I liked most about the Renegauge is what I didn’t notice while field testing it, which was a sore cheek and a tender shoulder. After three days of hard gunning, I was still ready for more. This was thanks to the Renegauge’s ability to eat-up felt recoil through a combination of the gas system, the cushy butt and cheek pads, overall weight, and its stock rod buffer. The lack of felt recoil was especially impressive considering we were hunting from layout boats, where odd shot angles and imperfect gun mounts are all part of the fun.

My test gun functioned flawlessly, though I didn’t get the chance to shoot light target loads through it. The Renegauge is easy to field strip, which made cleaning it a quick chore. It borrows some nice features from the competition world, like a beveled loading gate and angled trigger guard for faster reloading. The oversized bolt-release button, safety, and trigger guard made it easy to run the gun with gloves on, too. The trigger was set at about 4 pounds.

The shotgun comes with three choke tubes and uses the Beretta/Benelli choke system if you want to throw in an after-market tube. The black finish runs $1,449, while the camo and turkey models both go for $1,549. The guns should be on shelves by early March.

The bottom line? With its first-ever semi-auto shotgun, Savage has introduced a unique, high-performance model at a fair price point, with looks and features that are certain to turn some heads at duck camps this fall.