The Best Dove Guns in Every Gauge

If you could only pick one shotgun for the September opener, which would you choose? 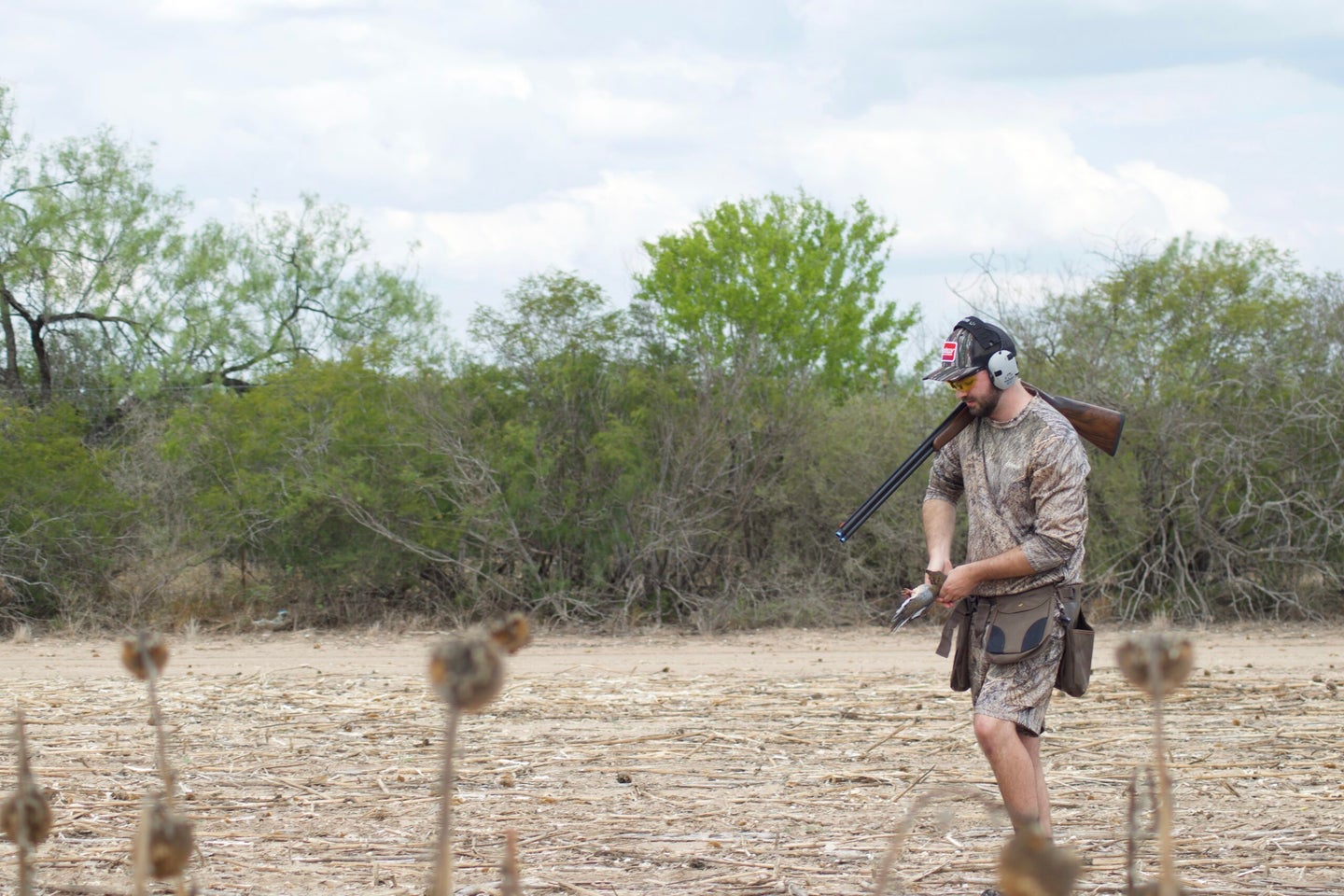 Which gauge will you be shooting this dove season?. Joe Genzel
SHARE

Wingshooters have it tough. We start our season with the hardest birds to kill: mourning and white-winged doves. They are small and fast, making them especially difficult to hit after months of having not picked up a shotgun, but for a few rounds of clay-bird shooting. So, it begs the question: What shotgun should you bring to the sunflower fields? Well, most folks just shoot their favorite shotgun, which is smart. You should always hunt with the gun that fits you best, and never let it go.

But it’s also fun to mix it up when you can. I decided that if I had to choose one shotgun in every gauge for doves, there would only be a select few that made the cut. Here they are.

What Makes a Good Dove Gun?

Dove season is a little different than any other bird season. It’s not a tough hunt by any means, and it’s not hard on your gun either. So if you want to take a gorgeous side-by-side—or any gun you wouldn’t want to get dinged up by taking it to the duck marsh or grouse woods—now is the time. For the most part, I like to take an old wood-and-steel double gun or pump with long barrels dove hunting. A longer barrel length can help your shooting on faster-moving targets, which is why you will see most pro clay-target shooters use at least a 28-inch barrel. It adds more balance to the gun and the extra weight keeps the gun moving. The only drawback to heavier guns is they also take more effort to get moving, which isn’t ideal for some shooters. That’s why I also like a lightweight auto-loader for doves, because I can get the gun on the bird faster, which is important, because these birds are so speedy that your shooting windows smaller.

You will also want a gun that doesn’t have heavy recoil. Dove hunting lends itself to a lot of shooting, so you don’t want a shotgun that pounds your shoulder. Also, more recoil leads to muzzle rise, which makes it harder to connect on followup shots. Use a gun that shoots as close to a 50/50 shot pattern. You’re going to be making a lot of quick shots, so you want to be able to cover up the bird and pull the trigger. Guns that shoot high make it more difficult to connect on doves.

In 1931 Winchester released the Model 21, an American side-by-side that was designed to outperform the best British double guns of that era—no easy task. To prove just how solid this gun was, Winchester tested it against other American doubles using special 150 percent pressure-proof loads. Every other gun in the test failed before it hit 400 rounds, but the Winchester 21 went through 2,000 of these high-pressure shells without a hitch.

Former Outdoor Life shooting editor Jack O’Connor said the Model 21 was “probably the strongest, most rugged, and most trouble-free double ever made.” About 30,000 of these guns were built through the 1960s, and Winchester’s Custom Shop continued making them until the 1990s. None of these guns are cheap, including the ones that you can order new today from Connecticut Shotgun Manufacturing Company (known as the CSMC Model 21, under license from Winchester). You don’t need to shoot doves—or any wild game—with an expensive gun, of course, but the Model 21’s engineering is masterful and it’s a truly iconic side-by-side. And if you have the means to purchase one, I suggest you do so.

John Browning’s Auto-5 was the first commercially-successful semi-auto shotgun design. It relied on a long recoil action design wherein the barrel and bolt moved rearward until the barrel was forced back to its original position by spring pressure. FN Belgium built the guns and, starting in 1937, they offered the Sweet Sixteen model in 16-gauge. The Sweet Sixteen quickly became a favorite firearm of bird hunters until it was discontinued in 1975.

Browning resurrected the A5 Sweet Sixteen in 2016, this time using their short recoil operated Kinematic Drive system. But the new A5 Sweet 16 still has the look (including the distinctive humpback) and feel of the original gun. It’s built on a scaled receiver and weighs just under six pounds, super light for any gauge of shotgun. The modern version of the A5 Sweet Sixteen also offers modern amenities like interchangeable Invector-DS choke tubes, nickel Teflon coatings, and stock spacers. But regardless of whether you carry an old A5 Sweet Sixteen or the new iteration you’ll have a robust 16-gauge semi-auto that’s perfect for doves.

Caesar Guerini invited a group of writers to Texas in early 2020 to announce the release of several new shotgun models, including a limited edition of their Woodlander over/under that was designed to be the perfect dove gun. It features a case-colored boxlock action with Invisalloy protective finish, a beautiful Turkish walnut stock with a hand-rubbed oil finish and 26 LPI checkering, a solid center rib, and an 8mm to 6mm tapered solid top rib. Engraved on the bottom of the receiver are a pair of gold doves.

These guns are available with 28-, 30-, or 32-inch barrels, and I found the 30-inch model ideal for smashing crossing clays, which mimic the flight pattern of doves. These beautifully balanced shotguns are built to a high standard. Wood-to-metal fit is exact. As much as I like the look of the wooden butt plate on the standard Woodlander, I think CG was wise to add a contoured rubber recoil pad to this gun, especially since dove hunting demands high-volume shooting.

Benelli finally built a 28 in the ETHOS Cordoba BE.S.T., and it’s one of the finest dove guns you will ever shoot. It utilizes Benelli’s time-tested Inertia-Driven system and functions with a full range of 28-gauge loads. The 28-inch barrel is ported and comes with five CRIO choke tubes. The the stock features ComfortTech 3 technology. The internal chevrons reduce felt recoil to the point where this gun barely thumps you at all.

While evaluating this gun, I ordered the heaviest TSS loads I could get from the Federal Custom Shop. Even when firing those rounds the muzzle jump was minimal, and I could feel the movement of the bolt cycling inside the action of this ultra-light 5.4-pound shotgun. Gun balance is superb and reliability is outstanding. Thanks to the advanced BE.S.T. exterior treatment, this gun is virtually impervious to rough handling and the wrath of Mother Nature. Benelli has never shied away from advanced design elements and the ETHOS’s look and feel is very modern and sleek.

Winchester takes two spots on this countdown, which speaks to the quality of the guns this storied company has produced. The Model 42 is the .410 version of Winchester’s Model 12, and like the Model 12 it earned an enviable reputation for reliability. Winchester’s Chief Design Engineer William Roemer adapted the Model 12 to function with .410 shells, and the gun was released in 1933. From its debut until the Model 42 was discontinued in 1963 about 164,000 of these guns were produced, and almost six decades after the last 42 was manufactured these guns are still in high demand. Five grades of Model 42 were offered by Winchester: Standard, Deluxe, Skeet, Pigeon, and Trap. As the grade increases, naturally so does price. There are a few Standard Grade 42s to be had for around $1,000, but if you find a 42 in one of the higher grades or a Standard in near-perfect condition, the price will increase markedly.