A .410 Is the Ideal Shotgun for Experienced Wingshooters to Retire With

Winchester’s M42 pump and M37 single shot .410s are perfect for shooters who have spent a lifetime trying to master the art of shotgunning 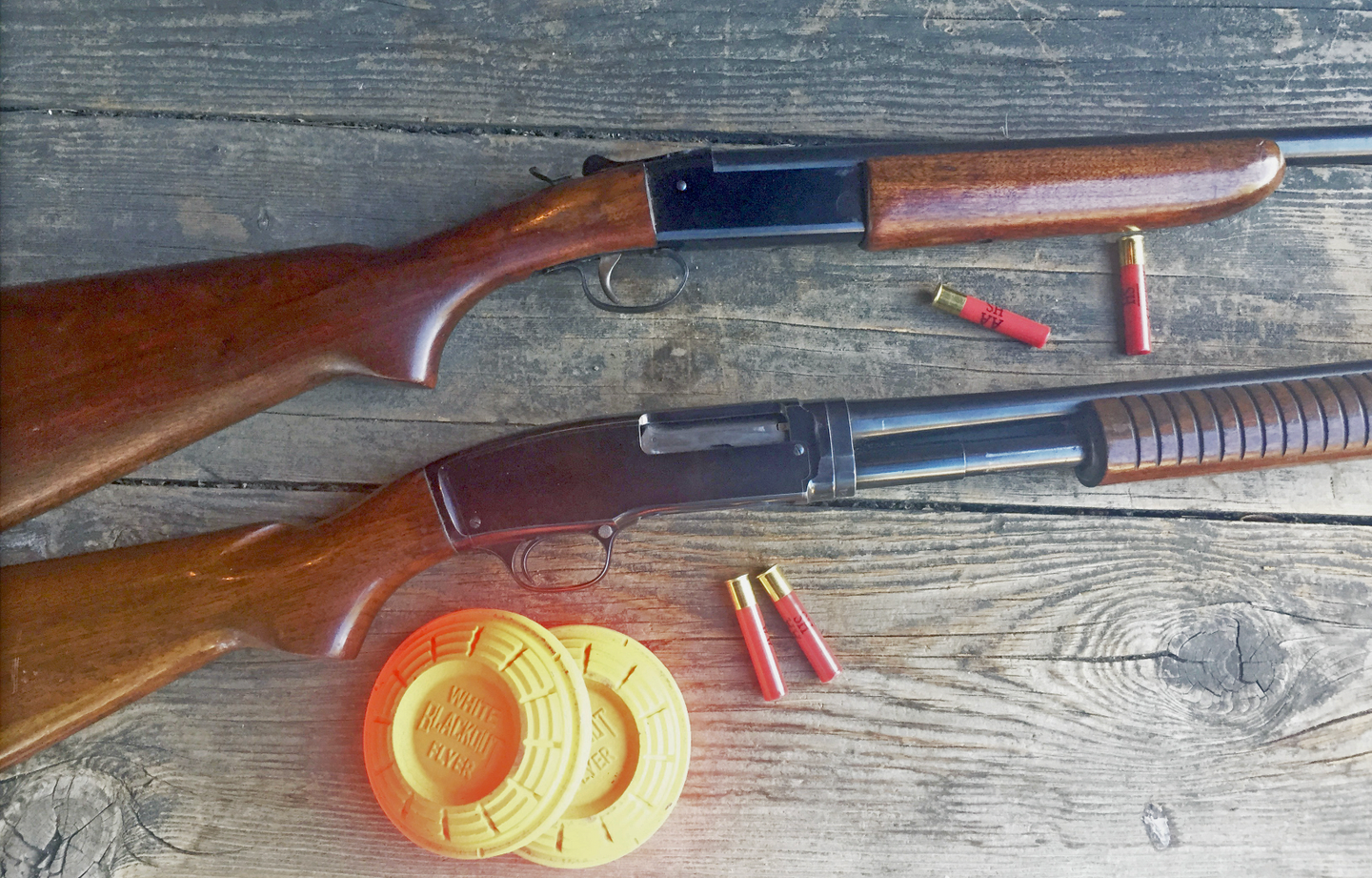 Winchester's Model 12 and 37 are two .410s any shooter in the twilight of their hunting career would be glad to own. Payton Miller
SHARE

If you had to characterize Winchester’s Model 42 pump and Model 37 single-shot in equine terms, you could call one a thoroughbred and the other a workhorse. Between them, they cover the .410 spectrum to perfection.

The M42—essentially a scaled down Model 12—was produced from 1933 to 1963. The M37 is slightly younger, having been made from 1937 to 1963. The year 1964 was a sad one for Winchester loyalists, as it saw the demise of many iconic gun models. There’s a reason why the term “pre-64” is still magic to many of us. It means the gun is both well-built and reliable. The company’s Model 70 bolt-action rifle gets the most attention for this distinction, but there are plenty of other cherished Winchesters that were cheapened by the decision to economize. Unfortunately for the M42 and M37, they were discontinued.

In the last 15 years, I got hooked on—and acquired—both guns. It was a part of the same shooter’s midlife crisis that drives many of us back to the smaller bores after decades of shoulder pounding from “bigger” shotguns. Getting hooked on a .410 generally happens once you’re fairly well-along in years. Maybe you’ve learned a thing or two about shotgunning by then. Or maybe you think you have. Either way, these two shotguns are perfect for the twilight of your hunting and shooting career.

Turning a Single Shot Into a Skeet Gun

There was a time when gun stores were full of economically priced, American-made single shot .410s. The laundry list included the Champion by Iver Johnson, the Stevens 940D, and any number of Harrington and Richardson models. I’ve shot them all and like them all. But for my money the top gun was the Winchester Model 37.

Like most modestly priced Winchesters with a long production life, the Model 37 typifies the concept of getting a lot of gun for the money. When it was introduced during the height of the Depression, it cost around $9. To put things into perspective, that wouldn’t get you within fondling distance of a 25-round box of Winchester AA .410s today. And don’t expect a “utility gun” price on any halfway decent Model 37 if you find one.

The break-action M37 was also offered in 12, 16, 20 and 28 gauges. Barrel lengths ranged from 26 to 32 inches. It featured a walnut stock and a top break lever just forward of the reasonably low-profile exposed hammer spur, and an automatic ejector.

I’d first become a fan of the Model 37 courtesy of my cousin who used one on family dove hunts back in the early 1960s. His was a 20-gauge.

Years later, I wanted one in .410. But it took me a while to find one, despite what author R.L Wilson had said about the model’s availability in Winchester, An American Legend:

I finally found mine at auction. It has a 28-inch barrel with a fixed full choke and features the old-timey “Steelbilt” stamp on the receiver. Full choke diameter in a .410 typically ranges from .395 to .389 inches (extra full). Mine was slightly tighter, measuring .388.

In the field of what is often dismissively termed “utility guns,” it’s difficult to find a .410 made prior to the screw-in choke era that isn’t choked full, although Winchester could provide a modified M37 on special order. Practical differences between IC, M and F .410s aren’t that great at 15- to 21-yard skeet distances.

My first skeet experience with my Model 37 was not what I’d fantasized about. I busted 14 clay birds using Winchester AA No. 8s. The heavier barrel of the M37 was not what I was used to, at least in comparison to my Stevens 940D, which had two inches less barrel and was nearly a pound lighter.

I shoot low gun and it took me a couple of rounds to get used to the Model 37. The problem was getting it up quickly enough to fit my snap shooting style. After I got that figured, my scores began to inch toward respectability.

The automatic ejector is forceful and shortstopping empties to save for re-loading while breaking the action requires a bit of care. Considering the cost of .410 ammo, though, it’s a technique worth learning. You can put the stock under your arm, break open the action with one hand, and catch the spent shell with the other.

Shooting skeet with a single shot .410 is so much fun I don’t miss the doubles. The difficulties inherent in the .410 learning curve are more than compensated for by the joys of smoking clays with a little bitty gun. When I’m swinging the Model 37 right, keeping my head down and following through, the birds break all the same.

A lot of small-gauge enthusiasts are also using .410s as turkey guns (where legal). Tungsten loads have brought the .410 back into the fold. But you can also kill a gobbler effectively with lead at reasonable distances.

I took my old Model 37 to the turkey pattern board, shot from 25 yards and managed to put about 15 No. 6 pellets from a 3-inch Winchester high brass game load in the kill zone. I aim to try some of turkey-specific No. 5 or 6 .410 loads as soon as I can lay hands on some. It’s been impossible to do so during this ammo shortage.

The Model 42 Was Made for Small Game

The Winchester Model 42 has long been the Holy Grail of .410s. Sure, you can get other .410 pumps, but they aren’t built as daintily to scale. Nor do they have that Winchester panache. Browning did offer a Miroku-made (Japanese) reproduction from 1991 to 1993 in various grades. They were excellent by all accounts. Used specimens are priced competitively with original Winchesters.

Most of us who wanted a .410 pump purchased a Remington 870 or Browning BPS. I shot a BPS .410 for many years. It served me well on dove and skeet. But I became unbearably envious of the M42 Winchesters, which were easily a pound (or more) lighter. Granted, weight can be a blessing; a whippy gun isn’t always a good thing. But I love light guns—mine weighs 5 pounds, 12 ounces— and so I had to have the M42.

After searching for years for a Model 42 I could afford, I managed to luck into a 1955 standard grade with a 26-inch modified barrel. Other grades included deluxe, skeet, pigeon, and trap.

Using a 2.5-inch Remington load of No. 6 shot, I printed a 25-yard pattern on a 24-inch target from the M42. About 55 percent of the 112-pellet payload was above the horizonal line. The balance of strikes in the four quadrants of the target were even in number, except the lower right slice received a skimpier share of shot.

In terms of hunting, I have found the M42 an effective dove gun early in the season before the birds get spooky and shooting ranges increase. You can also kill early bluewing teal with the .410 or mallards in the timber, though I’d opt for bismuth or Kent Tungsten-Matrix if you can find (and afford) it. You can also shoot rail with the M42, and even bobwhite quail.

Read Next: The Comeback of the .410, Plus Four Pump-Action Shotguns for Small Game

It is an ideal rabbit or squirrel gun as well, particularly if you have dogs that can chase bunnies or tree a foxtail into close shooting range.

Single shot or pump, a .410 is an indispensable item as far as I’m concerned. It’s true, young hunters will grow out of one (or feel as if they have). But I hope by now I’ve given you old timers a reason to grow into one.