Winchester Bismuth delivered impressive patterns and performance in the field 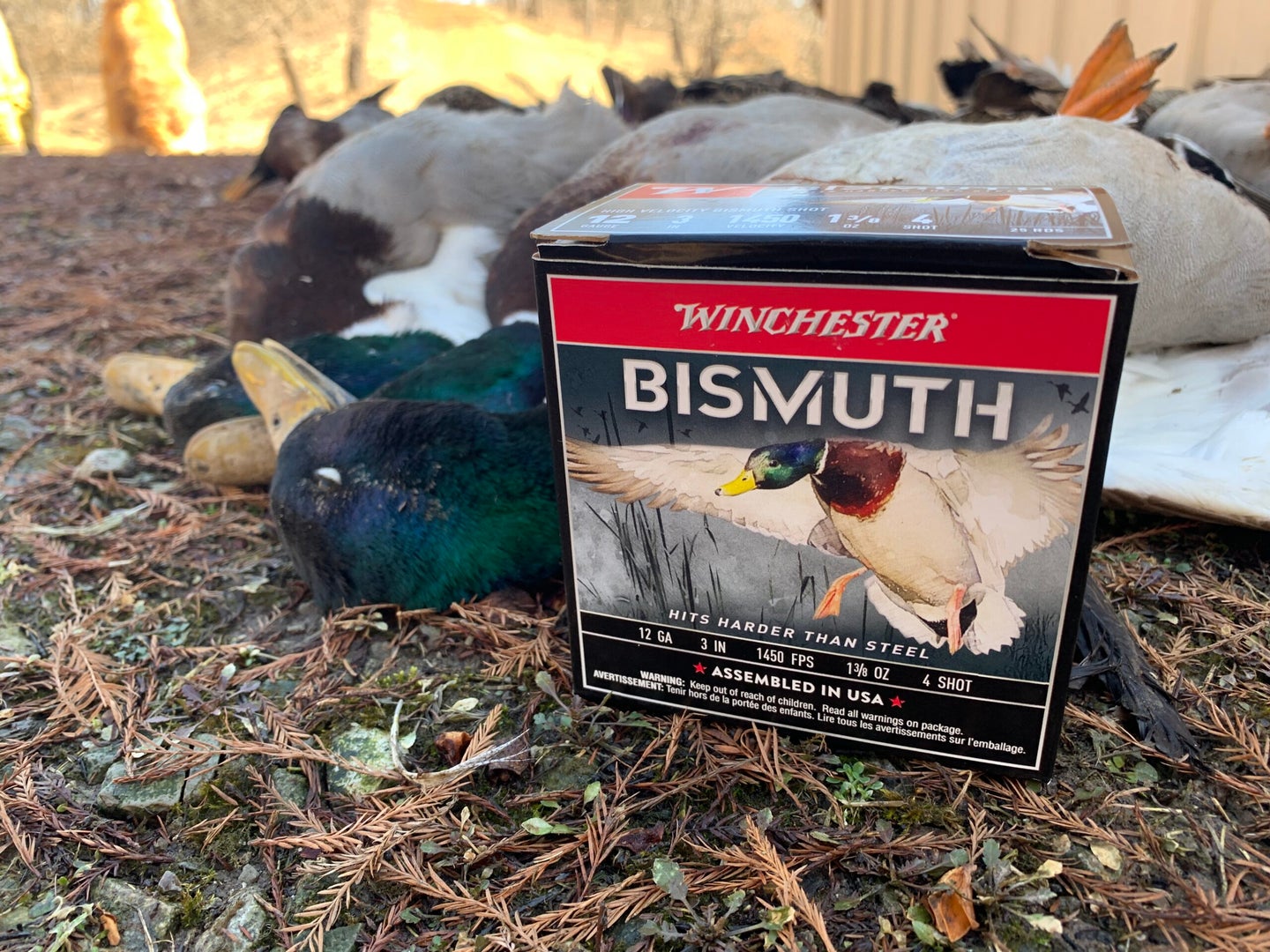 Winchester is one the last major ammo houses to deliver a bismuth load, but their new waterfowl offering, Winchester Bismuth, seems to be worth the wait. The shotshell patterns closer to the old lead loads duck hunters were allowed to shoot prior to the lead shot ban. Winchester Bismuth will be attractive to duck hunters because of its superior pattern performance and its ability to kill birds cleanly. I had the chance to test the loads at Winchester’s NILO Farms in southern Illinois on flighted mallards and patterned it here at home. The results were some of the most impressive I’ve seen from a bismuth payload.

Winchester Bismuth will be available in 3-inch 12- and 20-gauge offerings. There isn’t a 2¾-inch shell yet for hunters who enjoy shooting old guns (3-inch chambers didn’t become common until after 1935 when the Migratory Bird Act limited the capacity of repeaters to three shells). The two 12-gauge loads—No. 1 and 4 shot—have a charge weight of 1 3/8 ounces, and a listed muzzle velocity of 1,450 fps. Twenty-gauge has a 1 1/8-ounce payload with a muzzle velocity of 1,300 fps and will only be available in No. 4 shot to start.

Winchester’s key ingredient in this new load is a polymer buffer mixed in with the payload. The buffering, which looks like small plastic pellets, limits shot deformation and fracturing. Buffers are typically used in turkey loads, and according to Winchester, they are the first ammo maker to buffer bismuth. Just to be clear, Winchester has a technology called Shot-Lok that holds pellets together inside the wad with a resin (it’s like the shot is glued together). But this new load uses a different buffering design.

The bismuth shot itself is tin-plated for protection from moisture. Plating, whether it’s tin, copper, zinc or something else, mostly helps keep pellets from rusting so they function properly. Plating can produce better patterns, but it has to be administered properly. Author and shotshell expert Tom Roster has extensively tested plated lead shot and found that nickel plated lead produces denser patterns than copper. Also, the primer and four-petal wad are lacquered to help keep water out and the gunpowder dry so that it burns at a proper rate once the firing pin strikes the primer.

Here’s a closer look at the Winchester Bismuth loads I tested.

Those that are old enough to have killed ducks with lead know how potent it was. Lead typically has a higher pattern percentage and is denser (11.34 g/cc) than bismuth (9.6 g/cc). It is also much cheaper, a reason why some hunters who shot ducks with lead have difficulty paying $40 (or more) for a box of lesser metal (bismuth). Steel offerings are less dense (7.8 g/cc) than bismuth, but can also run half the price, and will effectively kill ducks inside 35 to 40 yards. That’s why, until recently, bismuth has only been popular with duck hunters who wanted to bring old fixed-choke shotguns with thin steel barrels back to the blind (steel shot and TSS are not safe for such guns). But Winchester—and other shot makers, like Boss—have been able to engineer bismuth so it patterns closer to lead, making it more effective at killing waterfowl.

It’s no secret bismuth is brittle. I’ve seen pellet flakes on paper while patterning bismuth. Some shotshell makers say the shot fractures due to choke constriction; others say it fractures upon impact. Winchester added the polymer buffer and said that’s why their payload stays intact.

At NILO, we shot two competitors’ bismuth loads against Winchester Bismuth at 20 yards on heavy paper. Each load carried a 1 3/8-ounce payload of No. 4 shot. Based on what we saw in Winchester’s demonstration, it was clear that the competitor’s loads were fracturing. I did the same test at home with all three loads and found that the competitor’s loads did fracture. Winchester Bismuth did not. But fracturing doesn’t necessarily mean a bismuth load can’t deliver a solid pattern or kill ducks efficiently. In fact, one of the competing bismuth loads that fractures had a slightly better pattern at 60 yards than Winchester in my testing.

I patterned the three loads at my home range, plus a 2¾-inch, 1 1/8-ounce, No. 6 lead load (to show the pattern percentage of a similarly dense lead offering versus bismuth). I shot all three bismuth loads a total of 10 times through a Browning Maxus II and Benelli Super Black Eagle 3 with full chokes at 40 yards. I also shot each of the bismuth shells at 60 yards with the Maxus (it was difficult for me to get a solid pattern with the SBE3 at that yardage because it shoots high).

The other competitor’s load delivered a 49 percent pattern through the SBE3 and 46 percent with the Maxus at 40 yards. At 60 yards, it put 50 pellets (23 percent) inside the 30-inch circle through the Maxus. The lead load put 187 of 253 No. 6s on target with the Maxus for a 74 percent pattern, the second best of the test. Without doing a deeper dive on bismuth shotshell performance across the field, it’s unfair to shoot down results of competitive brands. Later this year we’ll do a full, head-to-head review of bismuth waterfowl loads to see which performs best.

NILO Farms is a hunting preserve, so our group was allowed to shoot pen-raised mallards there in early March. The ducks were released from a hill above and flew down to a small pond. It wasn’t particularly sporting, but gave us an opportunity to see how the shotshells performed on live birds. It was impressive. Our group pass shot ducks at ranges from 40 to 60 yards and killed them over a small decoy spread at 25 to 35 yards. I can’t recall seeing that many ducks get shot stone dead. If you put your bead on the bird, Bismuth does the rest. There were some longer passing shots that hit the back half of ducks. Those shots didn’t immediately kill the birds, but they didn’t sail far. When ducks were at close range, Bismuth hammered them. There was a lot of blood in the water, which meant the pellets were penetrating the birds.

Obviously, these farm ducks didn’t have the down feathers a late-season mallard develops, so I asked another trusted gun writer, who had hunted January ducks and geese with the loads, how Winchester Bismuth performed during his hunt. He reported that the ammo had no problem killing greenheads and big honkers out to 35 yards.

Recoil on these shotshells is stout. You will feel every bit of the 1 3/8-ounce shot charge, especially if you’re shooting an inertia gun.

Read Next: The Best Duck Hunting Shotguns for Waterfowlers

Is Winchester Bismuth Worth the Price?

The high cost of bismuth shotshells relative to the pattern performance hunters get from the non-toxic ammo has been a long-standing hurdle for shot makers to clear. Winchester Bismuth will cost $45 to $50 for a box of 25, which is competitively priced in the bismuth field. Still, $2 per round is spendy no matter how you look at it. And if you keep shots to responsible distances, most affordable steel offerings will get the job done. But I do appreciate how well Winchester engineered this load. It’s one of the most impressive non-toxic shotshells I’ve tested in terms of pattern percentage at 40 yards. And if you’re going to splurge on a box or two of premium ammo—and don’t want to spend even more money on TSS—this is a fine choice.