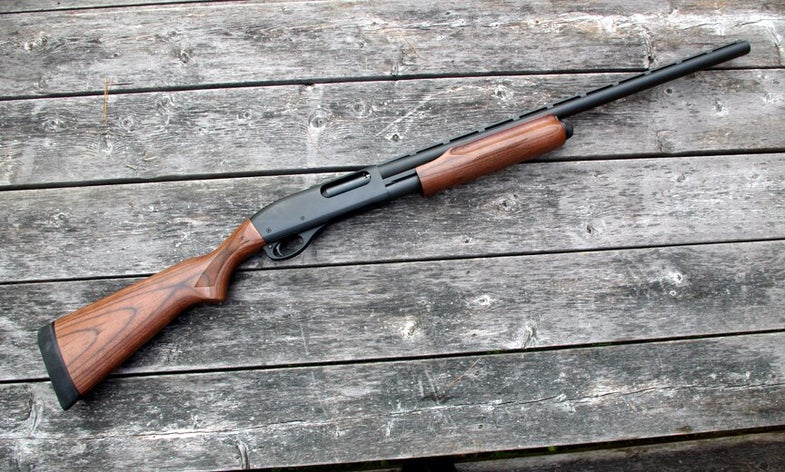 The Remington 870 is the most successful pump shotgun ever built. Range 365
SHARE

From 1920 to 1950, the world changed at break-neck speed. Automobiles replaced horse and buggy, the television was invented, and the U.S. entered a second World War. Shotguns advanced as well with the creation of several timeless designs that are still popular today. John Moses Browning continued to innovate while other gunmakers worked tirelessly tried to keep pace. What resulted were some of the most iconic shotguns in U.S. history.

A handful of guns shaped this time period, most notably the Remington 870. Big Green sold more than 11 million models in countless configurations. Its popularity continues to this day. If you shoot shotguns, you’ve likely shot an 870, or at the very least, hunted with someone who owns the vaunted pump shotgun.

Here’s a look at the best shotguns that defined this era.

The Model 17 technically was born in 1913 from a John Browning design patented in 1915 and sold to Remington Arms. However, Remington couldn’t bring it to the marketplace until 1921 after World War I ended and civilian gun production began again in earnest. This sleek pump-action shotgun featured bottom ejection, which was nothing new for Remington (the Model 10 was a bottom-eject gun as well). It was more refined than the 10 though, and available in a lighter (and more dynamic) 20-gauge version.

The Model 17 was only produced in 20-gauge with a total run of 73,000 units built between 1921 and 1933. Browning came up with the initial design but both John Pedersen (credited with the Model 10 design) and G.H. Garrison made improvements to the 17. The shotgun had a cult following but it never gained much ground on the popular Winchester Model 12. But the gun does have historic significance and influence on several iconic pump guns that followed, including the best-selling pump-action of all time—the Remington 870.

The Remington 17 gave birth to the Ithaca 37. Every gun manufacturer was chasing the Model 12 and Ithaca was no exception. Ithaca liked the sleek lines of the 17 and the bottom ejection feature, making the gun friendly to left-handed shooters. Ithaca designer Harry Howland made a couple of changes to the firing pin and the ejection mechanism. Plans were made to debut the shotgun in 1933 as the Ithaca 33. But the Pedersen patent for the 17 didn’t expire until 1937, so it wasn’t released until four years later.

The shotgun, dubbed the “featherlight,” was built in a myriad of variations. Defense-style models with barrels as short as 13 inches have been used by the military, and police around the country. It was especially popular during the Vietnam War where having an enclosed chamber bolstered reliability. Waterfowl and upland bird hunters enjoyed the 37 for the same reasons—they fired in harsh conditions.

Today, the Ithaca 37 is the only pre-World War II pump shotgun still in production. The company has changed hands several times, and is now headquartered is in Sandusky, Ohio. Current Model 37s are available in 12-, 20- and 28-gauge. Sadly, no new 16 gauges are in production, but they can be found on the used market.  All in all, it is a very successful design with over 2 million units made.

Remington’s iconic pump shotgun barely made it in this time period. The 870 is a workhorse, able to take next-level punishment and negligence while still dropping birds and big game with authority. I guided snow goose hunters for years on the Texas coast before the conservation order came along in the 1990s. We hunted hard and had little time for guns that wouldn’t perform under rough treatment. Most guides I knew used an 870 and had done so since childhood. Mine road in the back of my truck with the decoys and dog, and without a case. I kept a spare 870 in case a client gun malfunctioned, because it was so reliable.

Before the 870, Remington designed a darn good pump gun in the Model 31. That gun’s action is slick as glass and reliable as well. But the monster that was the Model 12 just kept on outselling Remington’s offerings. Designers Ray Crittendon, Philip Haskell, Ellis Hailston, and G. E. Pinckney began working to simplify the 31 to make it more affordable. They borrowed features from the 760 pump rifle and 11-48 semi-auto shotgun. In fact, the 12-gauge 870 receiver is the same one used for the 11-48 16-gauge, which kept the overall weight of the gun down.

The 870 hit the market in 1950 to a warm reception. The guns feel good in the hand, point well, and are very easy to field strip. A simple threaded screw-on cap holds the barrel on and two pins hold the trigger assembly in place. There are two shell latches on either side of the receiver. Depress those while pulling forward on the fore-end and the breech bolt and slide assembly come out together.

Remington 870s were made for trap, skeet, military, police, home defense, marine defense, upland hunting, waterfowl hunting, deer hunting, and other purposes. My personal favorite model is the Wingmaster (the 870 was later made in an Express version that was cheaper). The name alone inspires a shooter’s confidence. All the gauges are covered in the 870 with exception of the big 10-gauge. With over 11 million sold, it’s by far the most popular pump gun of all time.

When John Olin started to run Winchester Repeating Arms after Western Cartridge Company bought them out in the early 1930s, he decided that a new side-by-side was just what the market needed. The U.S. economy was in shambles due to the Great Depression, but Olin believed a high-quality double built as well as or better than the British were making would sell.

The Winchester Model 21 was built to be the showpiece of American double guns and it’s without a doubt a very well-made gun. Is it the best of the American side by sides? That’s debatable and no doubt has been a topic of discussion around campfires for many years. Some will choose the Parker, some the Fox; others love L.C. Smith and Lefever.

The difference in the 21 lies in its receiver strength. Most other doubles of the era have receivers made from case-hardened steel. The 21 receiver is made of heat-treated chrome moly steel forging. Other doubles also lack the extremely strong chrome molybdenum alloy steel barrels attached to that forged receiver of the 21. Outdoor Life’s shooting editor Jack O’Connor loved the Model 21, claiming he never saw one shoot loose. In his “Shotgun Book,” he wrote, “I believe the Model 21 Winchester double is probably the strongest, most rugged, and most trouble-free double ever made.”