Are Today’s New Hunting Shotguns Really Worth the Price? Here Are 4 Used (and Cheaper) Models to Consider 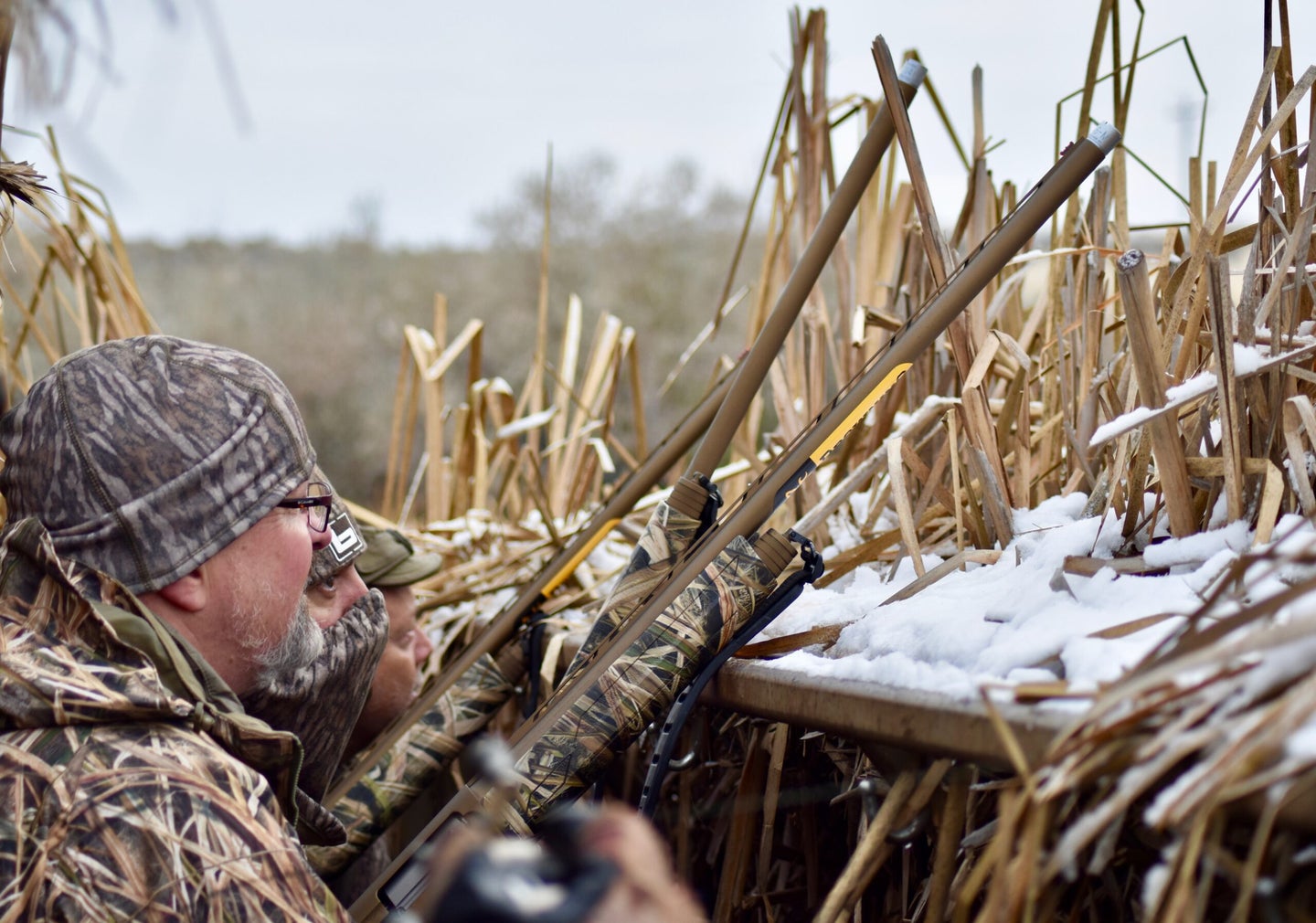 In today’s competitive shotgun market, manufacturers have to consistently release new products in order to survive. Gun manufacturers spend their time and money developing new concepts with innovations that are beneficial, and often better, than previous versions. But does that mean old guns become obsolete, and can’t serve the purpose they were intended for? Certainly not. In fact, many old designs are excellent in form and function, and still have a lot of life left in them. Here is a look at shotgun models that aren’t new, but can still be found and purchased at your local gun shop or online. They are all solid alternatives to buying a more expensive, newer shotgun, and will function just as reliably.

Winchester shotguns have a strong pedigree. Several of the most iconic American shotguns came from the Winchester line, including the Model 21 side by side, Model 1897, and Model 12. But the thing that made these guns great was their all-steel-and-wood (walnut) construction. It also made them expensive to manufacture. Winchester modernized their production in 1964 so they could make guns for less money. That didn’t go over so well, thus the “pre-64” Winchester era was born, with those guns still bringing premium prices today.

In 1968, Winchester tasked their top engineers to design “the best auto-loading shotgun in the world,” with a new gas operation system and all parts milled from solid steel. They also directed those engineers to use the Model 12 as a starting point. In 1973, the new shotgun was released to the market. They called it the Super X Model 1; a real beauty of a shotgun crafted in the old school methods of Winchester’s glory days.

Was it a smashing success? As far as producing an ultra-reliable quality 12-gauge semi-auto shotgun goes, yes, it was. It was not a commercial success, however, because the Remington 1100 was already available in every gauge (plus the .410), and the Italians were importing Remington’s guns at a brisk pace. But it was a great gun and those that own and shoot them today sing their praises.

What that gun did do for Winchester was lay the groundwork for the successful line of Super-X shotguns available today. The main difference in the Super X1 is the all-steel construction, so it’s heavier than later iterations, but also very strong and durable. Beginning with the Super X2 in 2000, the line continued to grow and expand with the Super X3 and, most recently, Super X4 shotguns. All these guns employ a similar gas-powered ejection system (born in the X1) that uses what gas is needed to cycle the shell while venting the rest out of ports in the stock. It’s a fast system that ejects hulls with authority.

Super X1s are still out there on the used market. A quick online search turned up several for sale in the $800 range. Those guns may be pushing 50 years old, but remain a quality firearm for under $1,000.

John Browning’s genius is responsible for most modern shotgun designs. Browning developed the repeating shotgun in the late 1800s, changing the way hunters thought about shotguns forever. Gone were the days of only going afield with one- or two-shot capacity guns. American hunters especially embraced the multi-shot option.

Then Browning leapt forward with the first successful auto-loading design, his famous Automatic-5, so-named because it could fire and eject five shells with reliability and speed. Browning knew he had lightning in a bottle and wouldn’t sell this design to Winchester outright the way he had with the 1897 shotgun and 1892 lever-action rifle. He knew substantial royalties would come his way and made receiving those part of the contract. Winchester balked, giving rise to the Browning Arms Company with manufacturing of the A-5 contracted to Fabrique-Nationale in Belgium. Remington later produced the design as their Model 11.

Belgian-made A-5s soon became the standard by which all other shotguns were measured. Waterfowl hunters embraced them; they would function under extreme conditions while offering more firepower in a quick-pointing package. Countless birds of all species fell to the A-5, and even big game after the Buck Special slug gun came out with a shorter barrel and iron sights.

Just like at Winchester, as time progressed and material costs rose, an alternative manufacturing source was needed. Browning turned to the Japanese firm Miroku in 1975 to build their guns at a more competitive price. Consumers weren’t so fond of the “made in Japan” label on their beloved A-5 shotguns, but the quality was very good, and Browning remained a top firearms brand.

The A-5s built in the late 1980s through 1998 had the new Invector choke system that accepted steel shot ammunition with no issues. (The barrels of some older model shotguns were built for lead shot only; because steel is a harder metal, it cannot be shot through them.) The Japanese-built guns are a great alternative (and highly functional) to the modern A-5, which is also very good, for those who prefer the old-style “humpback.” The new A-5 is lighter with an inertia recoil ejection system, and more versatile with a 3.5-inch chamber.

Miroku-manufactured A-5s are still around for good prices. Older Belgian guns have also resurfaced in duck blinds due to the popularity of bismuth and tungsten shotshells. As mentioned, it’s not safe to shoot steel through those Belgian guns with original stock barrels, but the Japanese Invector barrels will fit, so you could swap them if you want to shoot steel and not pay more for bismuth or tungsten.

Fabbrica d’Armi Pietro Beretta’s gun house certainly took the trade to another level since its founding in 1526. Meanwhile, Beretta’s guns hit the United States in the 1970s. Their over/under line is top notch, but gas-operated semi-autos are their bread and butter.

Legions of hunters and clay-target shooters worldwide depend on Beretta semi-autos because they point well, hit where you look, and function in any weather conditions. The A390 is a prime example. The basic A390 was the Silver Mallard in various barrel lengths with a blue finish and walnut stock. Synthetic-stocked versions followed, along with sporting clay and trap models, and a 20-gauge version. There was even a Gold Mallard variation for those who wanted fancier grade walnut and gold inlays on the receiver. Another interesting fact about the A390 is the “humpbacked” style receiver reminiscent of the Browning A-5. In fact, Beretta produced the Browning B-80 with that same feature, another great gun that can still be bought used.

RELATED: Rise of the Sub-Gauges: Why Small-Bore Shotguns Are Making a Comeback

A big change in the A390 series gas system was the addition of a second set of ports from the earlier AL and 302/303 systems that had only one. Early Beretta gas operation used all the generated gasses from the shell to operate the action. Adding a second port set created versatility in the system. It functioned better with a wider variety of shotshells, from light loads up to heavy 3-inch magnums. If a shell ejection required less gas (heavy loads), the secondary valve bleeds the excess gas through cuts in the stock’s underside. This was a big step forward in gas operation, allowing 1-ounce target loads to magnum turkey loads to function in the same gun.

Beretta has continued to perfect that system in the newer A400 and A300 guns. However, the newer versions are bulkier and thus a bit more difficult to swing than the slimmer/lighter A390, which also gives you a better sight plane with the high-backed receiver. If you run across an A390 for under $800, snap it up. They are the envy of many old-time duck hunters, and if you take it to the skeet range often enough someone will try and buy it off you—guaranteed.

Benelli started out in the motorcycle business, of all places, but wasn’t very successful at it. Later, the two Benelli brothers teamed up with Bruno Civolani who had an idea for a revolutionary semi-auto shotgun design, called the “inertia” system. So, in 1967, Benelli Armi was born, producing a new shotgun called the M121.

Unlike gas-operated shotguns, the Benelli line used a stock spring that the action recoiled against; a rotating bolt grabbed the shell head and ejected the spent round. A new shell fed up from the magazine tube, ready to fire in milliseconds. Harnessing recoil for ejection was nothing new—John Browning did it with the A-5. In those models, the spring is in the magazine tube and hidden by the stock. The entire barrel comes back to eject in what’s known as a “long recoil” design. In Civolani’s version, only the bolt moves. It’s a simple operation lending itself to little required maintenance, which waterfowl hunters especially enjoyed. This design also cuts down on the overall weight of the gun.

Here in the U.S., Benelli shotguns plodded along for a while in obscurity until German defensive gun maker Heckler & Koch decided it wanted to capture a piece of the shotgun market. H&K became the exclusive importer to the United States for Benelli products in the 198′s, bringing in the 121 and later the Black Eagle. Its reception was lukewarm, since hunters still preferred the traditional American brands.

Imports gained traction with the introduction of the Super Black Eagle around 1990. It was the first successful semi-auto chambered for 12-gauge 3.5-inch shells, gaining favor among waterfowlers looking to throw more shot downrange. By the mid to late 90s, the SBE became the “hot” gun and was highly sought after. In that same timeframe, H&K lost their importation contract and Beretta Holding Corp. formed Benelli USA. Subsequent guns imported after 1998 only carried the Benelli name on the barrel.

Benelli also produced the excellent M1 Super 90 and Montefeltro lines of 3-inch 12- and 20-gauge guns that were also very popular with hunters and clay-target shooters. All the early Benellis are well-made guns and still in use today. Finding used models for sale isn’t easy, but it’s not impossible, either. They go fast, so keep your eyes open.

As time progressed, Benelli developed the SBE II and SBE III models, along with updates on the 3-inch guns which became the M2, Ethos, and Ultralight lines. All are great options, but if you can find an earlier model, don’t discount it as inferior. The updated models have additional features such as the ComforTech stock designed to absorb recoil through a series of additions: gel comb inserts, gel recoil pads, and chevrons built to take the sting out of heavy loads. Older models lack this technology, but a good aftermarket recoil pad will soften the kick, and I’ll put the reliability of the H&K Benellis up against any other model of autoloading shotgun.