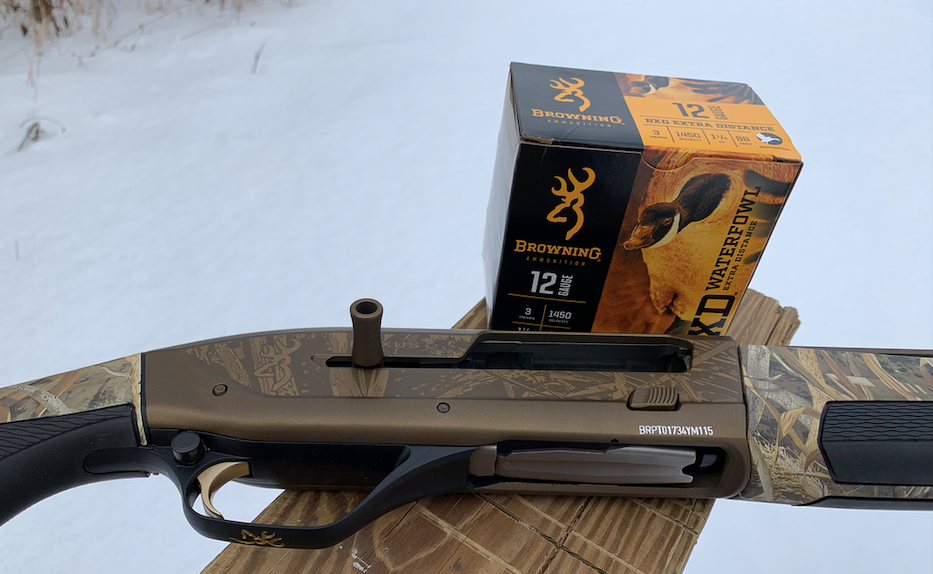 Browning has made sure that its shotshells pattern beautifully out of its guns. Joe Genzel
SHARE

I can remember goose hunting with a buddy one warm January morning. We set the decoys, climbed in the pit, and he unsheathed an original Browning Maxus. I think we saw one flock of honkers that day, so I spent a majority of the morning staring at his gun. I hadn’t seen the Maxus up close yet. I thought it was odd-looking. That square fore-end. No magazine cap; just some funky little latch you pulled on to field strip the gun.

“How do you put an extension magazine on that for snow goose hunting,” I inquired.

Smartly, Browning has fixed that problem with the 12-gauge 3 ½-inch Maxus II (Winchester SX4 extension mags can be paired with the new Maxus). Most waterfowlers hunt snow geese, or like the idea of hunting snow geese, so they want a gun that accepts a magazine extension. Paying $1,800 and not getting that feature is a hard pill to swallow, and I’m sure it made some hunters pass on the first iteration of the Maxus when it was introduced in 2009. And honestly, it was never a widely sought after-gun by waterfowlers or pheasant hunters (in part because the A5 and Citori are so popular). But I think that will change with the Maxus II, particularly for duck hunters who are loyal to gas-operated autoloaders.

“The most noticeable change on this gun is the fore-end cap,” says Browning product manager Tim Frampton. “One of the cardinal rules of gunmaking is to not give the consumer a reason not to buy the gun. And I think we accomplished that with the Maxus II.”

It’s also a much sleeker gun than the original. The old Maxus was blocky and kind of hard to get a comfortable grip on for those with smaller hands. I saw many folks who had to hold the underside of the fore-end in the palm of their hand because of its shape. That made the gun a little more difficult to swing than some of its competitors.

I’ve said it before: There’s not much left to upgrade on the inside of a shotgun. Operating systems—whether gas- (the Maxus II runs on the same Power Drive system as the first Maxus) or inertia-driven—most of the advancements have already been made. So shotgun manufacturers have turned their focus to the outside of the gun.

Browning upgraded the fore-end and pistol grip with rubber over molds. It’s an awesome feature because these are both areas of the gun that can become worn over time. The rubber slows that process. It also gives you better control of the Maxus II. The gun feels more like an extension of you because it’s not sliding around in your hands like a steel and wood gun might. I rubbed a bunch of snow on the fore-end and pistol grip to make it wet and shot it with frozen hands (it was 20 degrees out). I never felt the gun slip in my hands.

“We all love old shotguns but that checkering on the grip isn’t that great if the gun gets wet,” Frampton says. “Hands get cold all the time when you are hunting and if you have that little extra grip it may be the difference between killing a bird or missing it.”

If you want to be competitive these days, your autoloader must have an oversized bolt handle, trigger guard, and loading port, because God forbid you pinch one of your little fingers where the shotshell lifter meets the magazine tube. Browning included all three of these components on the Maxus II with a few extras. The first is Speed Load Plus, which lifts the first shell you load into the magazine right into the chamber. Browning has been using the speed loading function for decades (you will find it on the A5 line as well). It was invented by John Browning’s son, Val, and patented in 1952. Essentially it skips the step of having to press the bolt release button.

I’ve found the system to be both handy and a pain in the ass. You just have to get used to it. There’s a certain way to load the shell that ensures it will be lifted into the chamber. You almost have to push the shotshell all the way into the magazine tube and pull your thumb out fast enough so the lifter can catch the shell and deliver it to the chamber. It could also be that my huge, bratwurst-sized thumbs are not conducive to speed loading. There are some shotshells the gun won’t like and won’t speed load.

There’s also a ramped trigger guard, which you don’t see on many hunting shotguns (Benelli did this most recently with the Super Black Eagle 3). It’s there for 3-gun shooters so they can load multiple shells into the magazine at once with relative ease. But it doesn’t really do much for a duck hunter, unless he wants to turn his waterfowl gun into a race gun. I asked Frampton if Browning had plans to enter this market and the answer was “probably not.”

The cheek piece on the stock does soften the blow of recoil, which was very manageable on the Maxus II. I actually like the cheek piece for another reason: It always lets you know where your cheek needs to be, so your head is on the stock properly. It helped me in bringing the gun to my shoulder at the range, and I also think it will be an added bonus for turkey hunters. Sometimes when a gobbler hangs up you have to aim at the tom for 15 or 20 minutes (maybe longer). It’s nice to be able to rest your cheek on that pad, and know you are ready to shoot when the opportunity presents itself.

“That soft comb is fixed in place, and it does make recoil more manageable,” Frampton says. “But it’s also a good indicator that you are on the gun.”

My test model was the Maxus II Wicked Wing. This particular gun has a Cerakote barrel and receiver coupled with Mossy Oak Shadow Grass Habitat camo on the stock and fore-end. The gun will also be widely available in models that are all-camo (Mossy Oak Shadow Grass Habitat and Break-Up Country), and the all-black Stalker, which comes with flush chokes, not the extended chokes you will find in every other model except the deer slug gun. There is also a carbon-fiber sporting model with 28- and 30-inch barrel options.

Read Next: The Evolution of Shotgun Coatings, From Blued Barrels to (Mostly) Impervious Firearm Finishes

“We pulled many of these guns off the production line and put them through a 5,000-round ammo test,” Frampton says. “The malfunction rate could not exceed 1 percent for them to pass. We put all kinds of ammo through them. Light loads, magnums, dirty loads, rusted ones…it had to cycle them all.”

At the Pattern Board

Putting a gun on paper often gives you the answer as to why you are missing birds. Different guns shoot differently. I am always curious to see what will be revealed about a gun once it’s patterned. Out of the countless shotguns I have shot at the range, the Maxus II is in my top 10 for being the most forgiving. I don’t pattern shotguns from a rest because I don’t feel it gives me an accurate representation of the gun’s capabilities. I stand and bring it to my shoulder like I would in a duck blind or pheasant field, and fire. Sometimes I pull shots right and left, high and low.

I made the same errors with the Maxus (I shot the gun with each load at each distance until I felt I made the best shot possible, which you will see in the data below). But even when I screwed up, the gun patterned damn well. There was almost always an even distribution of pellets above (60 percent) and below (40 percent) my aim point. I did notice that more of the pellets struck the right side of the paper. I shot at a 30-inch target.

The gun cycled flawlessly on a brisk 20-degree day in late February. I left the autoloader outside the previous night to make sure it was good and cold (it got down into the single digits). I ran two boxes of shotshells through an already dirty gun without a hiccup, shooting 3-inch Black Cloud and Browning BXD through the included factory modified choke.

One thing I continue to be impressed by are Browning and Winchester’s commitment (they are owned by the same company) to ensuring their shells shoot well out of the guns they build. The BXD BBs performed phenomenally at the range. I have also killed some honkers with that at 40-plus yards using the A5. I’ve had similar experiences with the SX3 and SX4 paired with Winchester Xpert. Here are the results from the range: