Field Test: Benelli 828U Shotgun for Ducks in Uruguay 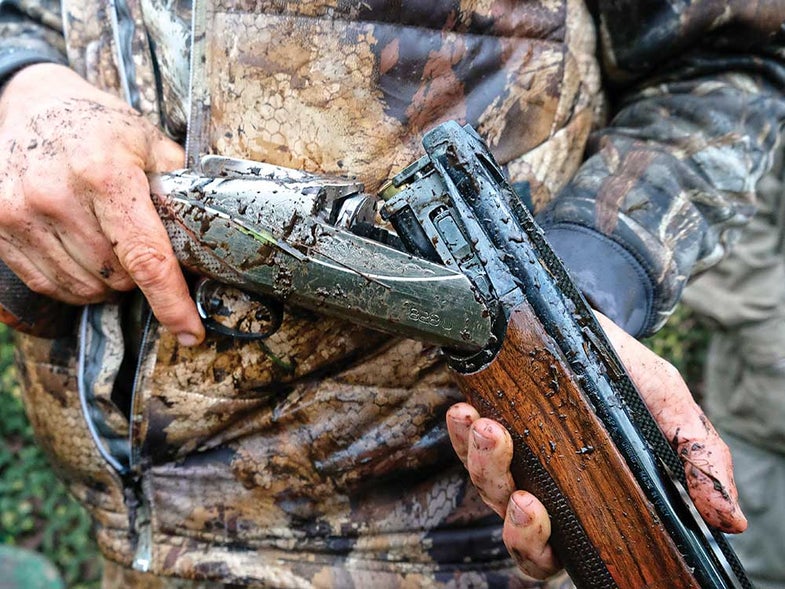 In Uruguay, the Benelli took a mud bath but kept on firing. Andrew McKean
SHARE

I was skeptical when the folks from Benelli invited me to take their first-ever over/under shotgun on a high-volume South American bird hunt last year. I didn’t think the lightweight 12-gauge, called the 828U, could take the abuse that thousands of shells can deliver to a gun in a single day. I’ve seen robust semi-autos fall to pieces in the dove fields of Argentina. But even more personally, I wasn’t sure my shoulder was up to the punishment of the daily pounding of spicy dove loads, interspersed with a steady diet of magnum duck loads. After all, the 828U with 28-inch barrels weighs only 6.6 pounds and feels even lighter.

But Benelli was persuasive, so I packed a recoil-absorbing shoulder pad—my hunting buddies call it a “sissy pillow”—to help tame the kick, and I headed to Uruguay’s bird-rich interior to hunt doves, ducks, and perdiz, the so-called false partridge of the pampas.

A First for Benelli
The name Benelli, of course, is synonymous with semi-automatic shotguns. The Italian company’s family of inertia-driven guns includes the versatile M4, M2, Ethos, Super Black Eagle, and Vinci. When Benelli announced it would produce an over/under, brand loyalists sniffed almost as dismissively as connoisseurs of traditional Italian doubles. No way could a stodgy over/­under continue the company’s reputation for technologically advanced operation, pronounced the former. No way could a double-barreled Benelli, with its modern styling, perpetuate Italy’s standards for Old World craftsmanship, denounced the latter.

What I discovered in Uruguay is that the 828U is very much a 21st-century over/under. It is elegant, in the same over-the-top way a Baroque castle is elegant, layered with rococo flourishes. And, like other Benellis, it is technologically advanced. The 828U packs more features into what is at heart a simple mechanism than you’d notice from its glammy exterior.

Aft of the cryogenically treated—and distinctively separated­—barrels, the Benelli’s steel breech block mates into steel races machined into its weight-saving aluminum receiver. The design contains pressure to the barrels and doesn’t allow it to transfer to the floating bolt face or to the hinge pins, the linkage that is often first to fail on traditional over/under shotguns.

That’s a great attribute for a high-volume shotgun, but my shoulder celebrated the Benelli’s less visible technology: recoil-­eating buffers embedded in the stock. The polymer fingers flex in proportion to the directional recoil exerted by charges of different intensity. A light target shotshell might trigger only one level of buffers. A high-brass field load might activate two levels, and a magnum duck load might bring the whole system of baffles into play.

A recoil-reducing gel pad in the comb and a shim system that allows shooters to customize cast and drop to their anatomy—as a lefty, I like a little bit of cast—makes the 6 ½-pound 828U a pleasure to shoot with almost any load. I didn’t need my sissy pillow after all.

The Birds of Uruguay
So far, so good. But how would the gun handle the variety of bird hunting that David Denies’ Uruguay Lodge would throw at us? Our first shoot was for eared doves. Our group drove into a vast cattle pasture and set up facing a grove of spiky trees that looked like the hawthorns of my native Missouri. It was evening, and doves bombed into the trees looking to roost. Others rocketed across the open pasture. Shots were often tricky and required everything from sustained leads for long crossers to quick points at acrobatic incomers. I went through four cases of shells to down maybe 150 birds, not exactly stellar shooting, but these weren’t the routine 20-yard quartering shots of Argentina, either.

The next morning we hunted ducks, a mix of Brazilian teal, yellow-billed pintails, and rosy-billed pochards. There’s nothing particularly tough about a South American duck hunt. Little hunting pressure and copious amounts of corn make for cooperative birds. But the liberal limits and ounce-and-a-half lead loads gave me ample opportunity to experience the 828U’s ability to tame recoil. My main complaint with the Benelli was that I was limited to only two shots.

Even after the gun went down in the Uruguayan mud—a slurry of cow dung and pampas sludge—the 828U kept performing, though I routinely struggled to hit right-to-left crossers.

Each day, we spent a few hours hunting perdiz, little quail-sized flushing birds that are related to kiwi. Perdiz love to scatter in vast fields of knee-high grass, where they’ll fly only when approached by a pointing dog. It’s a game for wide-ranging dogs and long-legged hunters. And it’s a game for the 828U. Of all the hunting I did in Uruguay, the Benelli was best suited for perdiz. The light gun balanced beautifully just fore of the hinge, and it jumped to my shoulder almost of its own volition.

It handled towering birds and wild flushers. It scratched out doubles on covey rises, and was such an easy-carrying gun, I could have hunted all the way to Paraguay had I not been called away to hunt more doves.

One Gun for Every Hunt?
In idle moments back home—usually when the ducks stop flying—my friends and I kick about a simple question: If you could own only one shotgun, and use it for all your hunting, what would it be? Most of us answer a reliable pump gun, though some favor lighter semi-autos for mornings of geese and afternoons chasing pheasants and grouse, plus the occasional wild turkey.

Not once, in years of asking that question, has someone recommended an over/under. My experience with the 828U makes it an unexpected candidate for the one-gun award.

It is not a cheap gun—the wood-stocked version I shot retails for $2,500. But when you consider all the technology and styling of the Benelli, it’s on the accessible side of Italian over/unders. And its recoil-eating features, plus a mechanism that should never wear out—and if for some reason it does, you simply replace the steel breech—make it an heirloom gun that you can shoot all you want before passing it on.

The best testament I can give the Benelli is that, after my return from Uruguay, I held onto the gun. I wanted to use it for Montana’s pheasant and duck seasons. And to show it off to my skeptical buddies.