The Keys to Deer Antler Growth 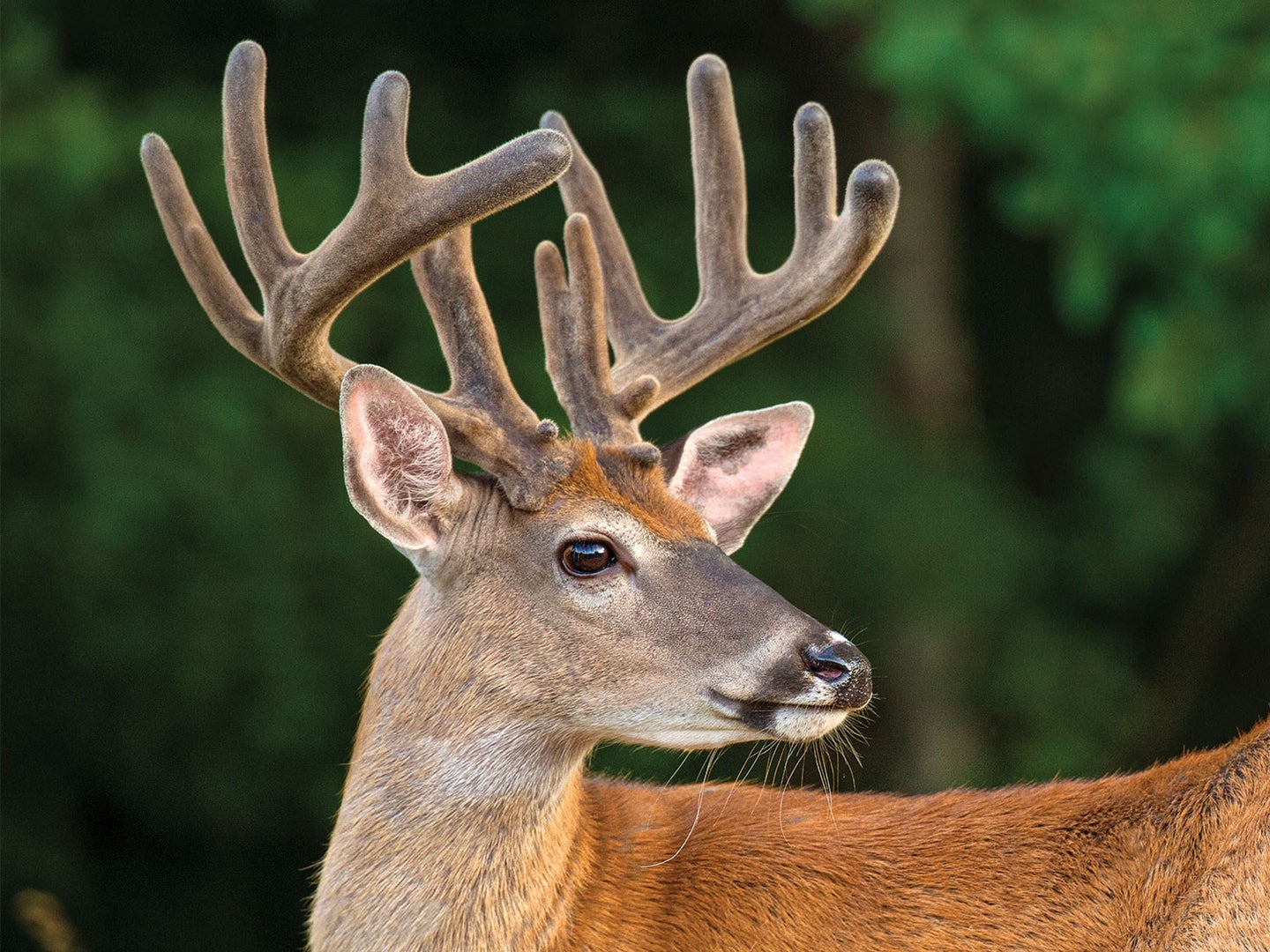 A velvet-racked buck makes the most of the growing season. Mark Raycroft
SHARE

Deer antlers confound us nearly as much as they fascinate and obsess us. As a population of hunters, we’re pretty good at quantifying them—the best of us guessing with surprising accuracy the inches of bone on a running buck at 100 yards—but we’re lousy at understanding how that buck grew his antlers, or explaining how those specific dimensions were achieved.

Trained wildlife biologists have only a little advantage. They can tick off the ingredients that go into building antlers, but they’re at a loss to predict with much accuracy how wide (or tall or heavy) a buck’s headgear will grow, or whether it will sprout a sticker point or a drop tine. And we are all even worse at predicting the specific conditions that result in outsize antlers come hunting season.

But ignorance doesn’t stop us from guessing. Around this time of year, you’ll hear your buddies (or at least, my buddies) cite various theories of antler growth.

Research indicates no single element, whether meteorological or nutritional, is responsible for antler growth. Instead, the building blocks of antlers are familiar to any human parent trying to grow healthy bones in their offspring.

The first factor in growing massive antlers­—the one recognized by any of your buddies (or mine) who pass on killing a buck this year in the hopes that he grows bigger antlers next year—is age.

“We know that antler size is positively related to body size and mass, and that on average a whitetail buck will grow his largest set of antlers between 5 and 7 years of age,” says Matt Ross, assistant director of conservation for the Quality Deer Management Association. “At a population level, maturity trumps environment.”

In other words, if you want to influence a single element of antler growth among the bucks you hunt, don’t pray for rain—let them get older. But humans are not a particularly patient species, so if you want to determine whether this is the year to quit your job and spend the fall hunting for heavy-antlered young bucks, then there are some leading indicators to consider.

The first is an easy winter. The prompt to begin growing a fresh set of antlers is regulated by a rise in testosterone, which is triggered by photoperiod. If a buck enters the spring season in good physical shape due to a mild winter, then more energy is available to sprout new antlers once his testosterone starts flowing.

“Antlers are luxury organs,” says Jim Heffelfinger, wildlife science coordinator with Arizona’s Game and Fish Department, and a research scientist at the University of Arizona. “Antlers won’t grow unless the body is in good condition. Antlers start with the bases. In a poor year, either coming off a tough winter or in a spring without good forage, the bases may not be as heavy, which will then affect the rest of the antlers’ growth.”

The second big takeaway when it comes to growing antlers is that in a wild population, it’s nearly impossible to manage for genetics that favor big, gnarly antlers. There are simply too many variables to consider, including the genetic influence of does on their male offspring and the role that maturity plays in antler growth.

Ross doesn’t waste time with the factors that most hunters can’t control.

“Before you worry about what makes a good ‘antler year,’ look at the things a hunter can influence: allowing bucks to get some age and practicing good herd management. Keeping the deer density low enough by shooting enough of them that the herd size isn’t above the land’s carrying capacity is something everyone can do, and that directly influences antler growth through nutrition.”

Once the boxes of age and herd health are checked, then you can consider the annual and seasonal influences of antlers.

Ross says my buddies’ theories are partly correct. The right amount of rain at the right time can jump-start the nutrients antlers require (although, as Heffelfinger’s experience shows, above-average moisture is the most influential in areas with relatively sparse precipitation). It seems rain coaxes very specific vitamins and minerals out of very specific plants, and some regions of the country simply have more and better forage than others.

“You are what you eat,” concludes a landmark study into the role of genetics and nutrition by researchers at Mississippi State University. “To produce the best-quality deer, you must provide them with the opportunity to forage on the best-quality plants.”

That study found that deer from the Mississippi Delta region, which has more fertile soil and more abundant agricultural cropping, were 41 pounds heavier and grew 25 more inches of antlers than deer of the same age from the nearby Lower Coastal Plain region, which has thinner soil and grows more timber than soybeans.

Timely rains and above-average moisture are even more influential in arid regions, like those where Heffelfinger manages mule deer and Coues deer.

“We have two different weather regimes here,” he notes. “With mule deer specifically, our northern deer in the Kaibab [National Forest] are like Rocky Mountain mule deer. Winter severity and quality of winter range are critical considerations. The better condition those deer are in coming off winter range, the more of a nutritional head start they have, and more of that nutrition can be poured into antler development compared to body mass.”

In the desert to the south, winter is a relatively easy season for mule and Coues deer. It’s the scorching-hot summer that’s the nutritional bottleneck.

Read Next: How Do Deer Grow Antlers So Quickly?

“When things turn dry in May and June, deer require water to digest that crispy vegetation, and water is our limiting factor. In the desert, our management strategies to reduce the bottleneck are maintaining appropriate grazing intensity and increasing water distribution.”

Whether you’re talking about desert mule deer or farm-country whitetails, it turns out that forbs, a term that describes flowering herbaceous plants such as daisies and clover, are antler rocket fuel. Timely rains that make the landscape where you hunt bloom like an English garden will produce bigger antlers than all the synthesized supplements you can buy.

“Forbs make up about 70 percent of a deer’s diet in spring and summer, when antlers are growing,” Ross says. “Typically, these plants are very digestible, which is important because if it isn’t digestible, that means the deer can’t use it. Forbs provide nutrition, energy, and minerals well above what they need for body maintenance. So, as long as deer have access to a flush of forbs when they need them, it will be a good antler year.”

Because pronghorn antelope grow shedding horns rather than antlers, their headgear develops a little differently than the spreading racks of deer or elk.

Unlike ungulates, which tend to grow their biggest antlers between the ages of 5 and 7, pronghorns tend to maximize their horn growth between ages 3 and 4.

“Pronghorns shed their horn sheaths anywhere from mid-October to mid-­November, depending on latitude. And once their horn core heals, they start growing another set of horns right away,” says Jim Heffelfinger of Arizona’s Game and Fish Department.

Horn growth in the winter tends to be above the prong; spring and summer growth adds mass to the base.

“Genetics and age are considerations, but the biggest determinant of pronghorn horn size is nutrition. As long as they have good winter forage, they’ll start growing new horns soon, and continue growing them through the winter. That’s why winter rainfall and winter forage are both critically important in pronghorn country.”