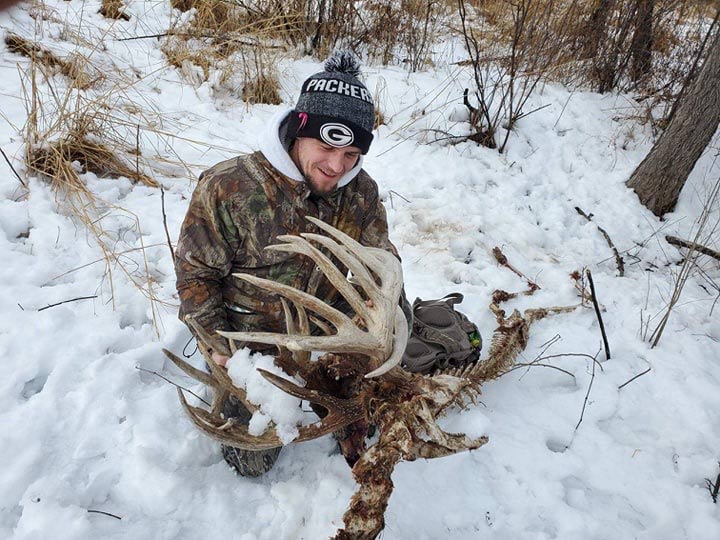 “I think that’s the biggest f—king deer I’ve ever seen in my life,” is the first thing Nate Olsen’s buddy blurted out. Crass, maybe, but he had to say something because Olsen, a 33-year-old Wisconsin deer hunter, had lost the ability to speak. He could only point to a pair of massive deer deadheads (antlers still attached to the skulls), one of which was indeed the biggest he had ever laid eyes on. In fact, one of the bucks may very well be the biggest non-typical in Wisconsin history. During the rut, the bucks’ racks had become entangled in a fight and they died. Olsen and his friend found the two deer in Rock County while shed hunting.

Wisconsin’s firearm record for a non-typical whitetail was set in 1973 by retired game warden Elmer Gotz. He shot the 30-point, 253 0/8-inch (scored by the state’s Buck and Bear Club) buck in Buffalo County on a deer drive with a Browning 12-gauge. Interestingly, Gotz’s buck was initially scored 245 0/8 inches by the Boone and Crockett Club, because Gotz actually shot off one of the deer’s browtines during the hunt. B&C later acknowledged the original score because someone went back and found the broken tine.

Olsen did his own measurement on the rack he found, and it came to 253¾ inches, which would just beat out Gotz’s deer.

The second buck that was entangled with the potential state-record buck scored in the 160s. Olsen is taking both deer to Mersberger’s Rut, Strut, and Stream Taxidermy with plans for full shoulder mounts. He wants the bucks to be mounted as he found them. In order to officially score the bigger deer, the 160 will need to be removed. No one has been able to untangle the racks, so the smaller rack will be sawed off and then pieced back together before it goes on the wall.

“The judges want it (the bigger deer) mounted before the EXPO, so it should be ready by the time we get to Madison,” Olsen said.

The property Olsen found the bucks on belongs to the family of his girlfriend, but he only hunts it for rabbits, sheds, and morels. Another friend of his, deer hunts a property close by and has trail cam footage of the potential state-record buck over the last several years. In fact, the last time his buddy had the deer on camera was Nov. 11, just days before the DNR estimated it died. Not only that, but that same friend passed on this buck a few years ago when it was a 180-inch, 2-year-old or 3-year-old, according to Olsen.

“That took some guts,” Olsen said of his friend that did not shoot the deer. “If a 180 walks past me, I’m pulling back on my bow and letting an arrow fly. He actually sat all gun season this year waiting on that buck, but it was already dead. He just didn’t know it.”

When Olsen found the bucks, he immediately called the DNR, and a few days later wardens took the deadheads away for testing. He was without the bucks for about a week.

“You want to talk about having a knot in your stomach,” Olsen said. “I kept thinking maybe they are going to confiscate it. Maybe I’ll never get it back.”

But he did, and there has been an insane amount of fanfare since, particularly for a small town in Wisconsin. People want to see this unique, and possibly record set of antlers. The first time he took the bucks to his step-father’s bar, there were hundreds of people waiting in the parking lot. They all wanted to take selfies with Olsen and the antlers. After three hours of glad-handing he still hadn’t made it inside the bar. A couple of guys had driven all the way from Kansas City just to see the racks.

Olsen has shot a few giant deer with his bow, the biggest just a shade over 173 inches a couple years ago. He’s taken a 150-inch 10-point, and shot a wide 8 this past season. Though he’s not sure if he could have drawn back on the bruiser he found if it had walked under his stand.