The Story of Black Duck Revival: “I Never Found a Place I Belong, So I’m Making One”

A broken building with many past lives becomes something bigger 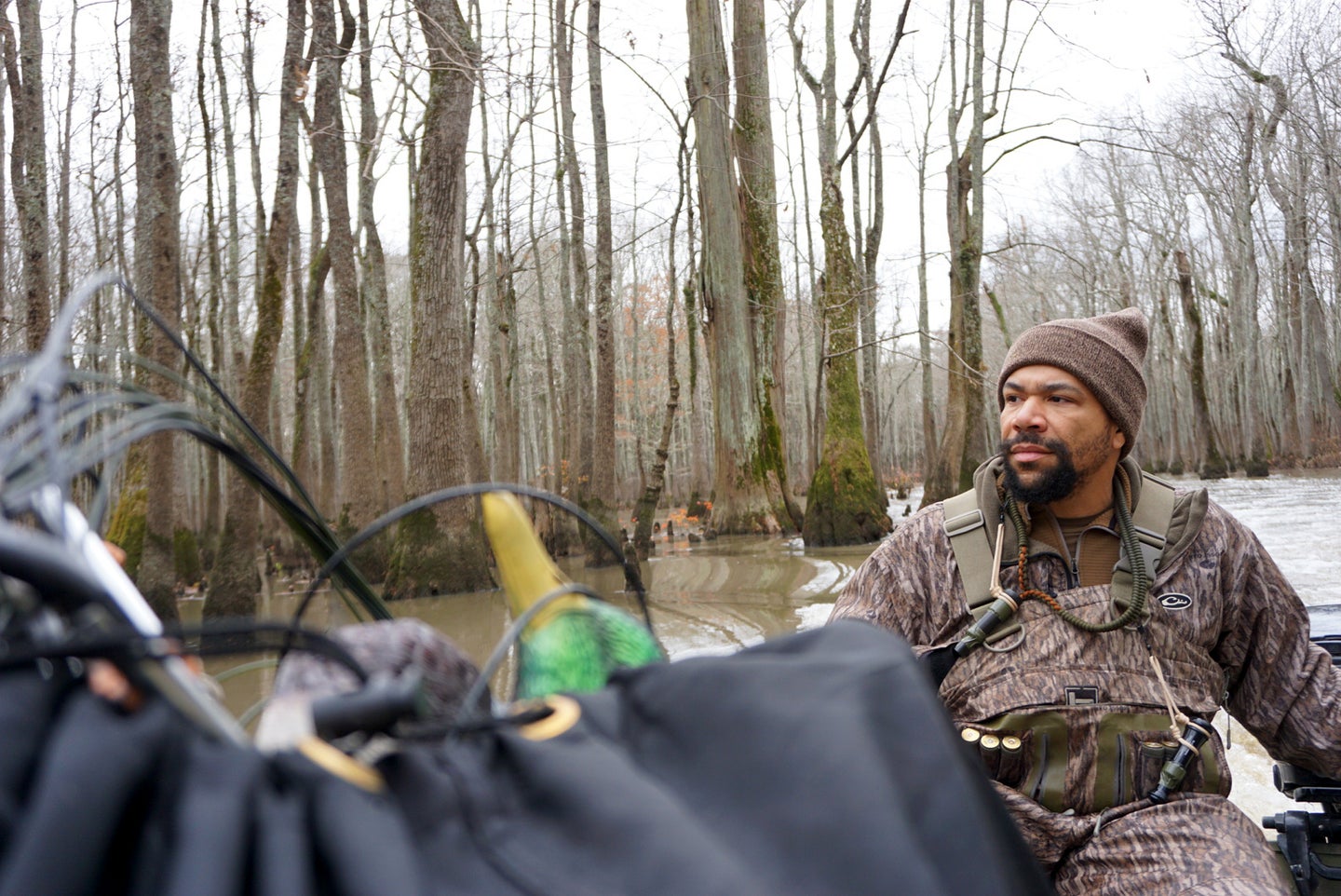 I have lived most of my life looking for a place that I belong.

When my wife and I purchased a derelict building in Brinkley, Arkansas, in the spring of 2017, I was just looking for a place in town where I could sleep and keep a few supplies during duck season. It was a practical way to be closer to the areas where I hunt, and a place to relax after a long morning of hard work and cold temperatures.

I started to realize, though, that this building could be more than a bunkhouse for me and maybe some friends. As I peeled back the musty layers of other folks’ jackleg repairs made with scrounged materials, I began to want this place to be more.

In its lifetime, the building had been used for many purposes: a home, place of worship, parsonage, and corner store. In its most recent incarnation, the place was a small, old-style Southern church. Coupled with Brinkley’s steady population decline and the aging-out of its few remaining members, the Heartline Christian Fellowship could no longer sustain services, and closed its doors in 2014. Why couldn’t it be a duck camp in its next life?

The idea of creating a purpose-built facility for duck hunters formed quickly. With access to some of the best public waterfowl hunting in the world just a stone’s throw away, I figured I could recoup some of my renovation costs by offering the spot as a weekend rental to out-of-state hunters. A beautiful floor plan and recreation area took shape as I gutted the old church and transformed it into a modern hunting lodge for the do-it-yourself hunter. I learned to frame walls, and cleaned 100-year-old cypress beams. I made costly mistakes, took apart my work, and re-did many jobs many times over.

I didn’t know all the things I needed to, in order to tackle the task of remaking this building when I started. But I had the desire to learn and the resolve to start over, time and again. During this maturation process, I had the opportunity to think in real detail about what I wanted to see from the space. I thought about places I had stayed while hunting, and those experiences I had when encountering hunters afield in rural areas of Arkansas. You see, I don’t look like most of the folks that I encounter when I’m hunting. Especially duck hunting.

I am a black man. To be true, I am bi-racial, but I live in a place where that nuance of truth is, most often, not afforded me. I am what I’m perceived to be through the gaze of others. I am reduced to something easy to understand for those people who resent nuance, and who are hostile to the Venn diagram of humanity. I am the monolith of black masculinity that this country is simultaneously enamored with and terrified by.

A tongue-in-cheek reference to that racial identity is definitely present in the name Black Duck Revival. So too, is the aspirational aspect of finding a black duck in the lower reaches of the Mississippi Flyway. I’ve never seen a black duck while hunting, and I may never, but I dream about it anyway. Dreaming is important—important enough to incorporate the dream into the name.

Some of what makes me different is by choice, and some of it is by nature. I have weird tattoos, like a ’95 Dodge Caravan, and, most of the time, a scruffy beard. Camo-clad and bleary eyed like everyone else around me, I still look out of place to some under the flickering fluorescent lights of a 4 a.m. gas-station stop. I get glances and double takes. Sometimes, it’s the knowing nod of sharing an identical pursuit. Sometimes, it’s a look of perplexity, or bemused condescension. Occasionally, there are glares. From time to time, I hear the familiar, gut wrenching words that clearly communicate to me that I am seen as an other, an outsider.

Those are tense times, and they can be dangerous. Should I puff my chest, or is discretion the better part of valor? What about pride? And what about survival? The considerations are endless, and decisions in these situations must be made quickly, and often. All of it is exhausting.

The constant remains that I am noticed. The anonymity so many other hunters enjoy escapes me. It’s one more factor to consider whenever I go afield (and there’s already enough to consider when you’re hunting ducks in Arkansas).

Those life experiences were with me as I undertook the renovation of the old church. They helped give me resolve when I wanted to quit, and helped to focus my intention when I needed motivation. I started to realize that, in this run-down building I was reshaping, there was an opportunity to create a space, both physical and ethereal, for people who felt like there wasn’t a place for them in the outdoors. Their road block could be that they want to hunt, but don’t know where to start. Or maybe they’ve been intimidated by wild places—for any number of reasons.

In this building I could combine my love of, and need for, both hard physical work and academic vigor. This space could serve as a hub for hunting, cooking, learning, and exploring history. It could become a place for hunters who wanted to think and grow. It could help renew folks, and build their self-determination for what is still to come. I wanted a place where we could freely discuss conversations and experiences specific to people of color, and other marginalized or disenfranchised members of the hunting community—both current and potential participants.

Hindsight is revelatory in the clarity it provides. Initially, I thought I had bought an old building with the goal of making a more comfortable space to crash. Instead, I found a building that’s a mirror for my personal journey. There is value in who and what I have been, and the stories that I carry. But the future is in the reimagining of myself. Black Duck Revival, the reborn iteration of that old church, serves as the scaffolding for that mighty task. It mirrors my quest to become a competent and proficient hunter, a pursuit and an identity I discovered as an adult. Now, it’s leading me to become something other than what I’ve been.

Black Duck Revival is a structure, but it’s also an idea. And it’s growing into its latest potential. This is our first year offering guided waterfowl hunts. Coupled with hands-on instruction in bird processing and cooking, my aim is to offer hunting as a holistic experience to those who find their own barriers getting in their way. So far this year we’ve hunted with seasoned waterfowlers, working professionals new to hunting, adult-onset hunters and their teenage children. Some hunters have been new to hunting specklebelly geese, and some are new to the pursuit in general. What all these people share is a desire to learn through experience. They value the experiential depth they can add to their lives by trying something new. I have come to believe that our own vulnerability, and sharing it, is what most emphatically links us humans to one another, and to the world around us—especially to the natural world. That’s a connection that everyone deserves access to.

Now, we are focusing more on the “revival” aspect of the name as well. It’s important to take the notion that we can provide for ourselves beyond the realm of hunting. I have seen many people who are desperate for a place where they can learn how we used to live (and many still do), even just a generation or two ago. When we had bodies that moved with the honest strength of physical labor. When we repurposed and reused and did for ourselves. When we grew food and hunted for sustenance in wild places. When we cooked our own food. Hopefully, the story of Black Duck Revival can serve as an example to like-minded folks, to show that a lack of knowledge is not the same as a lack of ability. Effort is the great equalizer, and surrounding yourself with people who know more than you do is the closest thing to a “shortcut” we’ll find as we make our way in the world.

These efforts to learn and grow make us more human. In these struggles, we find the nobility of endurance and the necessity of resiliency. And as perplexing as it may be to the uninitiated, chasing ducks is a hell of a conduit to those values.

Waterfowling can be hard, but that’s part of what I love about it. Chasing ducks and geese has taught me to find joy in the process of doing, instead of seeking validation from success. Birds are smart, competition is fierce, and Mother Nature always wins. Still, I return to the field and timber time and again, each iteration infinitesimally wiser than the last attempt. There are many ways to not be successful when duck hunting, and I’m proud to say I’ve put the time in to find my fair share of those ways.

Mostly though, it’s a romantic pursuit. Romantic, because in spite of the long walk or treacherous boat rides, regardless of ice or hordes of other hunters, the act of trying is ultimately an endeavor in optimism. You must maintain the belief that the magic can be found again. Birds will fly, wings will cup, the dancer will find a partner. Duck hunting has all of the beauty, reverence, and ritual of an old Southern church service. The fire and brimstone of the pulpit is echoed in the bombastic language of my fellow hunters, and the punctuation of morning gunfire in the timber.

Chasing ducks has also made me more patient. It’s made me better able to work in a hushed frenzy, and more capable of sitting with the silence that we too often run from. It has bolstered me with the confidence to find my own definition of success, live by my own values, and trust my own voice. It’s allowed me a space to share those feelings with others and provide room for them to find their own.

I never did find a place that I belong. So I’m making one.