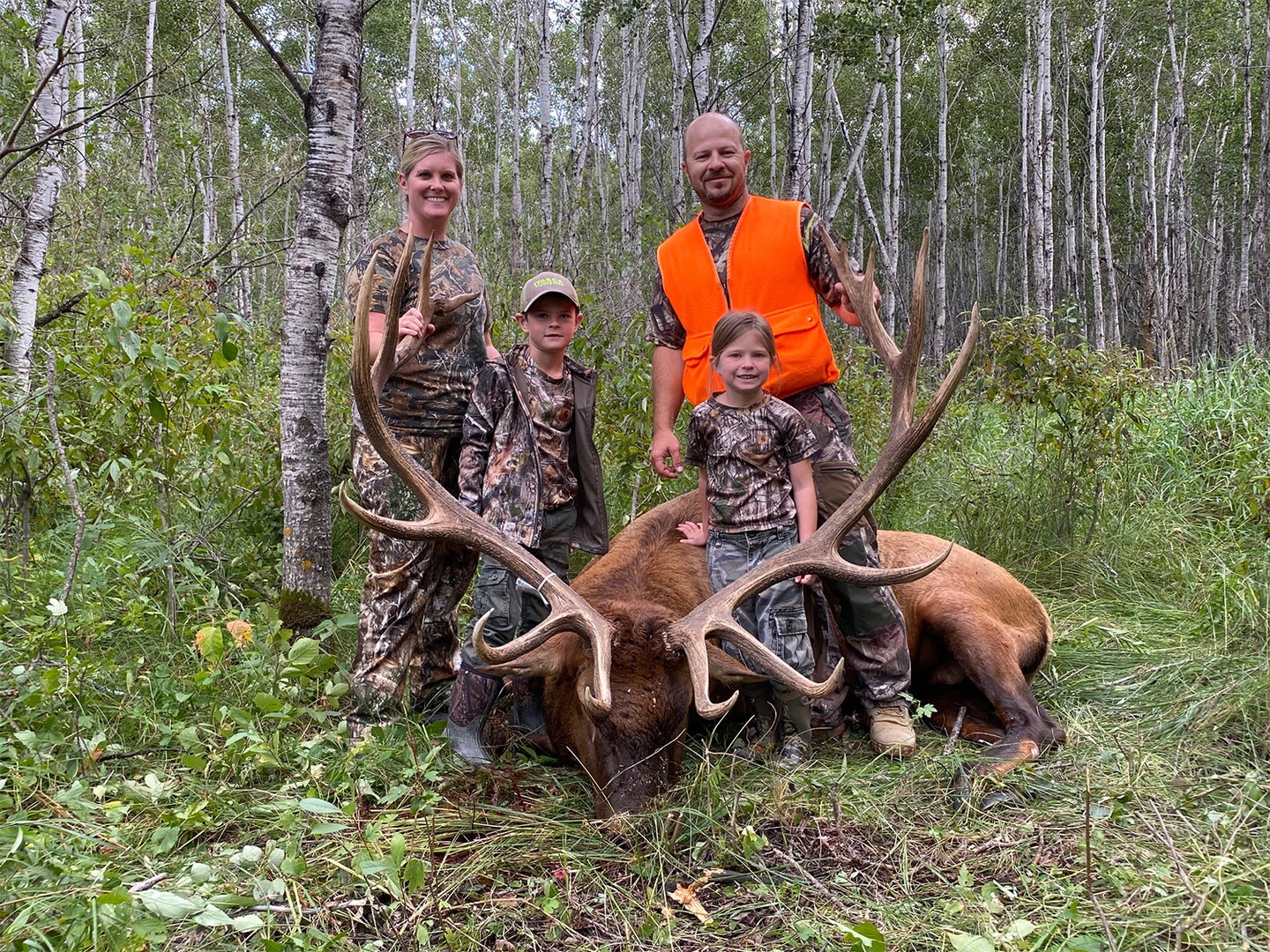 Lacey Lupien’s Minnesota bull elk was always a long shot. Even though the licensed practical nurse and mother of two lives within the range of the state’s elk herd (in the far northwestern corner), it’s tough to draw a tag. More than 4,000 applicants put in for only 42 licenses in 2020. It’s a once-in-a-lifetime tag.

“I’d been putting in for about 10 years,” says Lupien. “One day in early July as I was taking out the trash, I spied something that caught my eye in what had been in the junk mail pile. I checked I again. The word ‘ELK’ appeared through the window. It was an elk license! I had finally drawn!”

Scouting, planning, and preparation immediately kicked into high gear for Lupien’s hunt period, which was to begin Sept. 5, 2020.

The countryside in Kittson County is remote, vast, and flat. Crop fields intersperse with grasslands, brushlands, wetlands, and woodlots. People are few and far between. Elk have a lot of room to roam.

“My husband Lance and I would get the kids bathed and ready for bed, then buckle them in the truck and drive the back roads looking for elk during the summer evenings, trying to pattern them,” she says. Friends and neighbors knew she had the tag and scouted too, sharing intel. It was a family and community affair.

“The thing is, the elk live in the area, but the area is big,” says Lupien. “For example, one day a neighbor saw a group of elk that, a half-hour later, we saw four miles away. And those elk were just going about their day.”

Lupien has hunted all her life (she and Lance are serious whitetail chasers), but now ‘opening day’ meant something totally different. Starting Sept. 5, Lupien would have a one-week shot at a Minnesota elk.

How those elk got to Minnesota is an interesting story itself. Before European settlement, elk roamed much of Minnesota. But habitat loss and unregulated hunting combined to extirpate the big animals by 1900.

“The ancestors of this herd, known as the Kittson Central Herd, migrated into Minnesota from Manitoba in the 1980s,” says Jason Wollin, area wildlife manager for the Minnesota Department of Natural Resources (DNR). “The animals spend most of the year in Minnesota. In 2016, the herd goal was placed at 50 to 60 animals. Hunting manages their numbers.”

“The biggest challenge for the Minnesota elk population is managing hunter and landowner expectations for a herd that occupies an agriculturally dominated landscape,” says Barbara Keller, big game program leader for the Minnesota DNR. Elk can do a lot of crop damage, but landowners are proud of the herd too.

“The Kittson Central herd has been above the population goal for the past few years, so additional seasons and permits were added in 2020,” says Keller.

“Six 9-day hunting seasons ran for nine days each between late August and early December,” says Keller. “Seven tags are given out for each season, for a total of 42. A total of 35 elk were harvested from the herd in 2020, with a breakdown of 15 bulls and 20 antlerless (all female) elk.”

“Oh, we have some big bulls here,” laughed Wollin. “Most of the elk harvest (32 of the 35 animals tagged in 2020) takes place on private land, and our landowners are just great. And there are world-class animals. Just look at Lacey’s bull. She lives here, but folks who draw a tag and get busy do get access to private land. We couldn’t manage the herd without that. Our landowners like the elk, but they also need the herd to get hunted.”

And that’s just what Lacey Lupien was ready to do.

On the evening before her hunt, the Lupiens found an elk group in a soybean field on land they had permission on. “The sun came up, but the elk were nowhere to be found,” says Lupien. She and Lance sat in a different spot that afternoon and another area in the evening. They tried a new spot the next morning, September 6.

Then the community hunt aspect kicked in again. “Late that morning, we got a call from a friend who had seen the elk in an area where we also had access to hunt,” she says. “So we went there and got out to a spot at 1 p.m. to begin our sit.”

Anyone who has been to Minnesota, particularly the North Woods, knows how long the evenings last in early September. Lacey and Lance were in it for the long haul, going all-out, for this once-in-a-lifetime opportunity to pursue the elk they lived around every day.

But this wait wasn’t long.

“We were in this old rickety deer stand,” says Lacey. “Our kids, Lincoln and Leah, were with Grandma. It was Lance and me, and it was our 12th wedding anniversary. I thought oh well, I will do a Facebook post about how we were spending our special day.”

“Lance said ‘That’s the one, shoot it, shoot it,’” she says. The big bull was visible about 250 yards down a cut through the brush and woodlands. It was the same big bull they had been looking at off-and-on all summer.

“Oh my gosh I was shaking,” Lacey says. “I was so nervous. I got situated. I took careful aim. I squeezed off the shot.”

“I thought, Man, that’s your only job!” Lacey says. “So I shot again as the animal took off, but I knew it was my first shot or nothing.”

Years of whitetail hunting experience certainly played a part in what transpired for that fateful shot, and what happened next.

“We got down and walked over. It was warm [75 degrees that day], we were sweating,” says Lacey. “Lance said ‘over here,’ but I thought Over there, and we found a speck of blood over there—and where the elk had kicked up dirt.”

They followed the minimal blood trail through the still-summery vegetation: a speck here and a drop there. A little worry creeped in. Lacey saw some blood on a leaf well above the ground.

“Then I saw his rack, rising above the grass and brush,” says Lupien. The bull had travelled maybe 100 yards. “The antlers were that big and wide and tall. That’s how I spotted him—his rack.”

“Until you get that close to a bull elk, you really have no idea how big they are,” says Lupien. The 7×8 rack would later gross 380 inches and net 367 inches, which makes it the second biggest typical bull taken in Minnesota. “The biologists thought he would have weighed 900 to 1,000 pounds alive,” Lacey says. “I was in awe. So was Lance.”

Lacey wanted her kids to be in awe too. And there was meat and the cape to be taken care of. Time to get to work.

“We started by going and getting our kids,” says Lupien. “We wanted them to see that great animal. He was so big and beautiful.”

“Word got out fast,” she says, “and we had a lot of help.” A nearby farmer brought his tractor to do the hauling with a big wagon optimistically borrowed for such an occasion. A friend who is a tree trimmer brought his equipment and chainsawed/cleared a path through the thick cover to the elk.

“We were about three miles from our house,” Lacey says.

Field dressing and skinning occurred with the bull hung up back at home. Biological samples were taken, as prescribed in pre-hunt training sessions, for delivery to DNR biologists.

“Minnesota’s elk are probably one of the most deeply and extensively studied herds In the country,” says Wollin. Each animal is examined for disease (it’s currently a CWD-free herd), DNA, and overall health. A tooth was sent to be aged, but results haven’t yet been returned.

“The meat is just wonderful,” says Lacey. “It’s like the finest beef.”

What about those antlers? They are meeting up with the cape for a shoulder mount in the Lupien house.

But what’s the best part of all?

“It was definitely a family affair,” Lacey says. “Lance and I were together on our twelfth wedding anniversary. We hunted together. Our kids had helped us scout. They were so excited, and they got to see the elk.”

The Lupiens will continue hunting big whitetails, and having their kids along for that as usual. As for elk, Lacey’s Minnesota journey is over. “But now it’s Lance’s turn,” she laughed. “We’ll see if he can top that.”