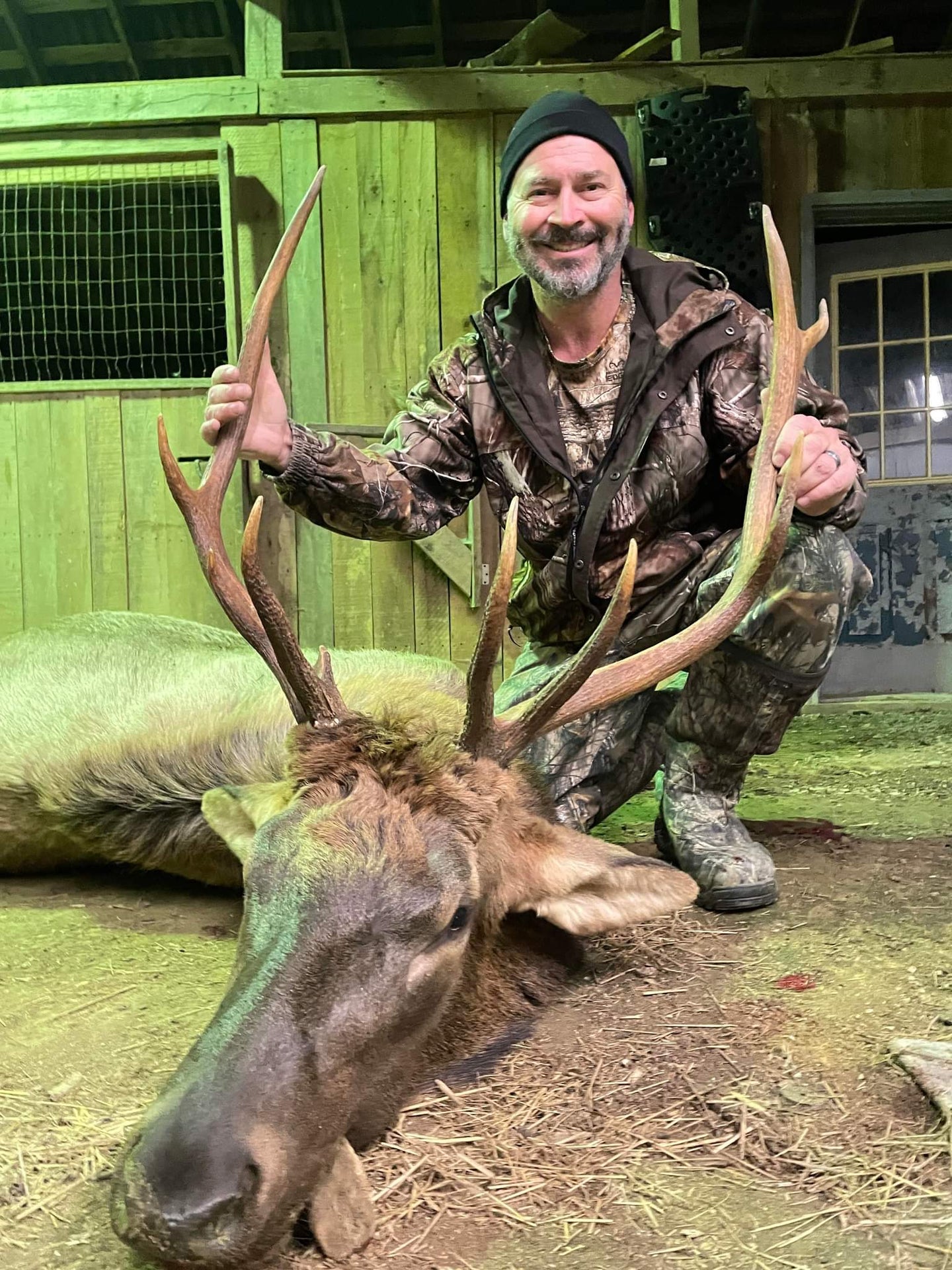 This year, Richard Bryson’s deer hunt quickly turned into an elk hunt. His farm doesn’t hold a lot huge bucks, mainly does, he says. But in early autumn bucks start roaming his property, and that’s when Bryson puts out trail cameras.

“On Oct. 31, Halloween, I checked my trail camera photos to see what was showing up near my pastures, and I was stunned to see a nice bull elk on my farm,” says Bryson, a 48-year-old electronics technician. “I’d heard rumors of elk being seen in McDowell County, W. Va., which isn’t far away. “But I never expected to see elk on this end of Tazewell County—let alone on my farm.”

Bryson immediately checked Virginia’s hunting regulations and learned it was lawful for him to harvest an elk on his Tazewell County land, only needing a state deer license to do so. Between 2012 and 2014, a total of 71 adult elk were relocated into Buchanan County, Virginia. By September 2020, Virginia’s restored elk herd was estimated at more than 250 critters, according to the state. There is no elk hunting allowed in Buchanan, Dickenson, and Wise Counties. But if elk stray out of those protected counties they can be legally hunted (as long as hunters follow state regulations).

During the next week, the 5×6 elk showed up in Bryson’s trail camera photos three consecutive nights grazing in farm fields. Then the bull seemingly disappeared, and Bryson thought the elk had moved on.

What he didn’t know, though, was that the cellular trail camera was malfunctioning, and the bull was still in the area, just not being photographed.

On Nov. 6 Bryson checked trail cameras to make sure they were working properly, including the one that was malfunctioning on the east side of his farm.

After doing that, it was about 5 p.m. when Bryson settled into a treestand on the west side of his farm.

“I’d been in my west-side farm stand for about 20 minutes and I got to thinking I ought to check that east-side cellphone camera that had malfunctioned,” says Bryson. “So I got out my phone, checked the camera app, and when it opened I had elk pictures. I immediately grabbed my gear and went down that tree quicker than a squirrel, moving to the east side of the farm where the elk was.”

Eventually he spotted a small buck casually feeding far off, unaware Bryson was watching. Finally, about 6 p.m. Bryson spotted the elk at 150 yards and the experienced deer hunter was stunned at the 5×6 bull’s huge body.

“My trail camera pics did him no justice,” Bryson says. “I had no clear shot with so many tree limbs. But he was calm, just grazing, and I had photos of him very close to the stand.”

So Bryson watched the elk calmly feeding, working closer to his stand.

“After feeding for over an hour he started trotting right toward my open shooting lane,” says Bryson. “I don’t know why, but he just stopped in the open right in front of me, broadside at 50 yards.”

He quickly raised his CVA Accura .50-caliber muzzleloader, and hit the bull with a 250-grain Hornady SST bullet.

“He took five or six steps, then just stood there,” Bryson says. “I knew I hit him and thought about reloading and shooting again. But I didn’t want to spook him by moving.”

The elk slowly started walking away, stumbled, then toppled over dead.

“I was beyond words,” Bryson says. “I just shot a bull elk in Virginia. It was incredible.”

Bryson quietly slipped out of his tree stand and headed home to get his tractor and return for the bull. He contacted Virginia wildlife officials, checking in the bull as he would a deer, and alerting them that he’d killed an elk.

Back at his farm he tried raising the estimated 700-pound bull elk as he would a deer, hanging it from a barn beam. But the bull was so heavy the beam broke.

“Dressing that bull at my deer cleaning station was a learning process,” Bryson says chuckling. “I had to quarter the bull into pieces to fit in my refrigerated game cooler I use for deer.”

Three Virginia wildlife personnel came to Bryson’s farm to inspect the elk, checking its health and learning about the animal that was estimated at 3.5-years old. Test results for disease and other issues have not been released yet by the state.

“This is the first one killed in Tazewell County in a long time,” Bryson says. “The biologists say elk range widely here, and some have wandered in from North Carolina, and one was shot in Lee County, Va.

“I’m thrilled, and amazed at just how big they are. The inside tenderloins from the bull must have weighed 3-pounds each. I can’t wait to eat them.”