A hard-hunting, versatile, .308 that can go long when needed

The first mountains I ever saw were the misty peaks of the Pacific Northwest. My great-grandfather on my mother’s side, an Italian peasant from Calabria, homesteaded south of Seattle in the early 1900s. Modesto Palermo came to America to work on the railroads, and our family took root in those damp, mossy environs with the Cascades to the east and the Olympics to the west, and, looming above all when the clouds parted, the magnificent snow-cloaked Mount Rainier.

When I was younger, I hunted those cedar-covered mountains, wearing a thick green wool cruiser that doubled its weight in the ceaseless rain, and carrying a walnut-stocked .30/06 while chasing deer and Roosevelt elk.

That was a long time ago. Back then, I never thought about what the ideal rifle would be for hunting that mix of dense, temperate rainforest and checkerboard clear-cuts. By the time my mind started dwelling on such things, I had moved away, first to New England, and then to Montana.

But when one of my best buddies invited me to come hunt blacktails with him in Oregon last fall, I gave the notion some serious consideration. 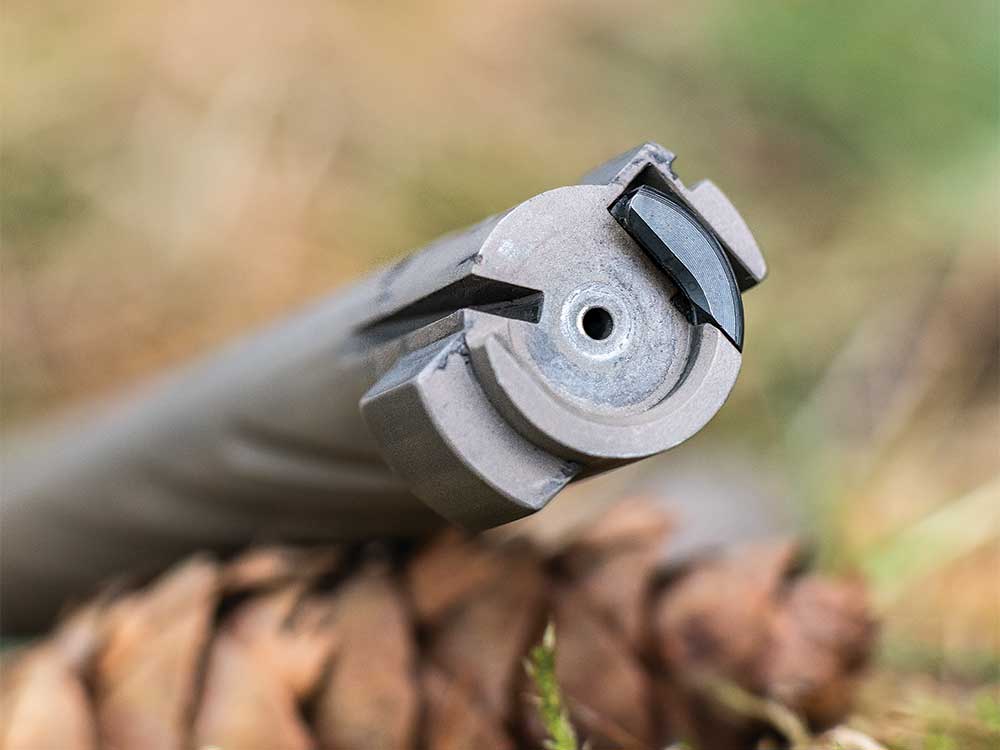 The bolt face on the M704 action has a substantial claw extractor that grabs the case rim as the bolt is run forward, making this rifle a true controlled-round feed action.

Hunting that terrain involves a combination of glassing and still-hunting. Shots can be anywhere from point-blank while creeping through the vined undergrowth to cross-canyon in those clear-cuts. Blacktails aren’t big animals, but you don’t want them to run off. Blood trailing is tough under normal circumstances. In a downpour, it is nearly impossible. You want to anchor them solidly if you can. You also need to plan to cover a lot of ground, and much of the public land in the Cascades doesn’t allow motorized access, so you’ll be on foot or, if you’re smart and sneaky like me, on a mountain bike. Lastly, in this harsh country, your rifle and optic need to be as tough as a roadside-diner coffee mug. To bring this rifle to life, I reached out to Mike Hudgins at Legendary Arms Works.

After a couple of conversations, I specced out a short, handy .308 with a heavyish barrel, and Mike got to work. One reason I went with LAW is that its M704 action is rugged and accurate. It is a controlled-round feed system where the claw forms part of the bolt face, and it has a mechanical ejector and three-position Winchester-style safety. The bolt body, handle, and lugs are machined from a single piece of bar stock.

The rifle’s round-action profile, which is full-length bedded, and its crisp Timney trigger, No. 6 contour barrel with recessed target crown, and stiff stock all contribute to the rifle’s very good accuracy. Five-shot groups averaged 1.03 inches, and the ammo I settled on for the hunt, Federal’s 175-grain Edge TLR, turned in .920-inch groups. With the right rest, the rifle can handle shots out to 500 yards.

But a rifle is more than just the sum of its accuracy and reliability, and here’s where the Hellcat, as Mike named it, really shines.

To enhance the rifle’s portability, I opted for an internal magazine with a hinged floor plate as opposed to a detachable box magazine. The rifle’s balance point is just below the bolt lugs, so one-handed carry is easy. The short 20-inch barrel and overall length of the rifle, at just under 40 inches, also make it easy to maneuver through thick cover and carry one-handed, barrel down, without needing to worry about jamming the muzzle into the ground, even when climbing uphill. It also straps into the scabbard on the back of my bike quickly, and stays out of the way while I’m pedaling up logging roads and across more technical terrain.

With the scope mounted—Leupold’s new Mark 5HD 3.6–18×44—the rifle weighs 9 pounds 6 ounces. The rifle’s compact dimensions settle that weight nicely between the hands, so the crosshairs are very steady from offhand, kneeling, sitting, and other field shooting positions.

The firing-pin assembly can be removed from the bolt body without any tools, allowing the system to be serviced in the field by hand if the action is exposed to snow, mud, or ice.

The comb has a slight reverse angle to it, which keeps the stock from slapping the shooter’s cheek under recoil, and the slightly beefed-up fore-end provides ample gripping surface for the forward hand, further enhancing control. The barrel is also threaded, so adding a brake or suppressor is easy to do too.

I’m a big believer in QD cups for attaching slings. They have a cleaner look, and because they can rotate 360 degrees, I never have to worry about a stud coming loose on me again. I had Mike put four on the stock—two along the bottom and two along the left-hand side. The rifle can be carried multiple ways, and I like having an extra QD cup on the butt for clipping a lightweight rear shooting bag to the gun. Mike put one stud on the fore-end to attach a bipod.

For the paint scheme, Mike let his nerd flag fly. He calls the camo pattern Endor, and it is based on the Rebel uniforms from Star Wars. He gives new meaning to the term “gun geek.”

I’m quite smitten with the results of our collaboration. LAW plans to put it into full production in 2019.

I won’t see a cent from whatever success the Hellcat achieves, but helping create a versatile precision rifle that is tailored to the country my family has called home for several generations is reward enough. I think other hunters who value precision and handling will find it suits their purposes as well.