When the ammo was all gone and the clay target dust settled, we picked the top new shotguns from this year's field 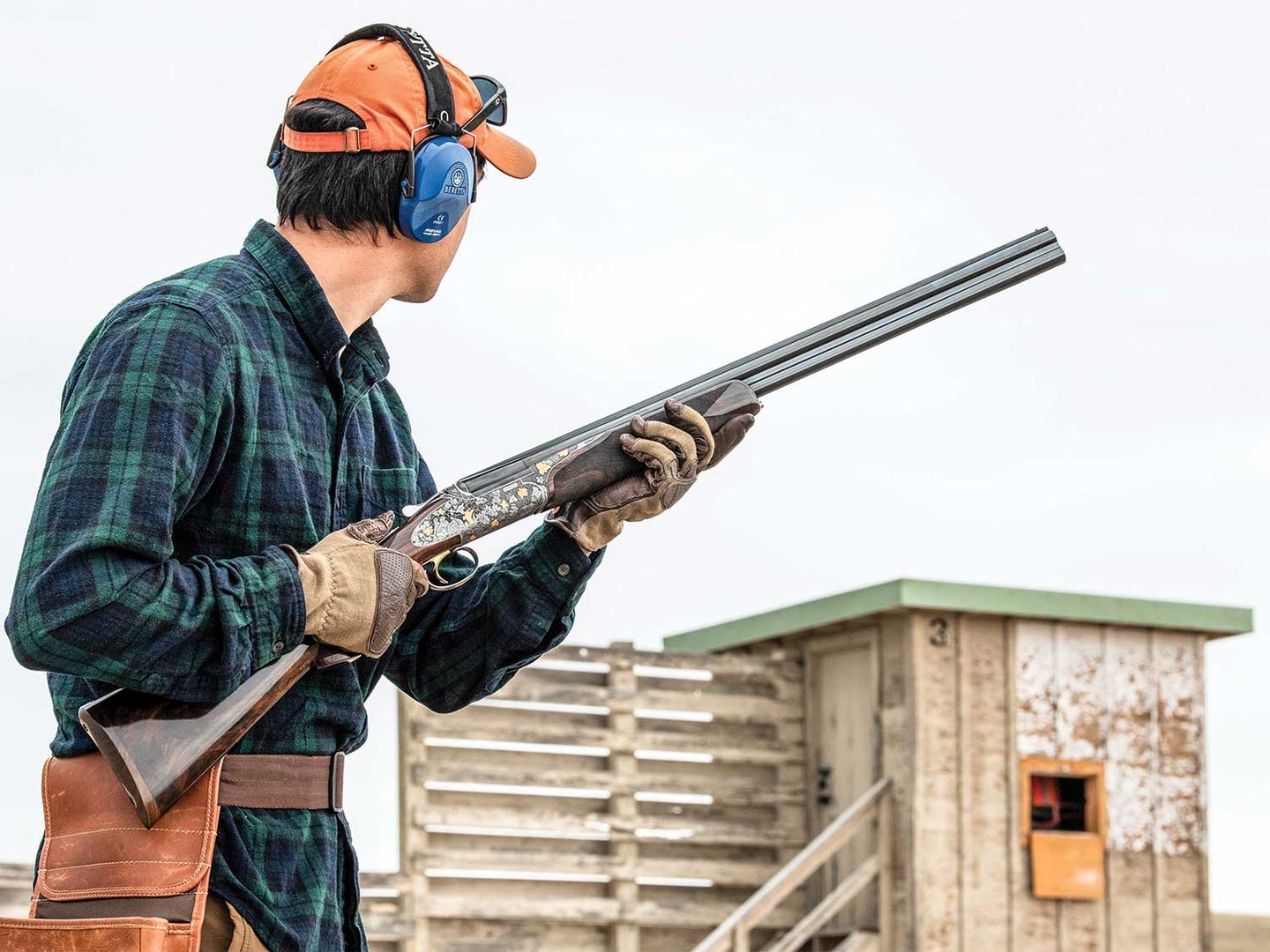 The new crop of shotguns has a little something for everyone. Overall it should be less threatening than the new field of rifles to those sensitive souls who value good old days of wood-stocked pumps. Some of these new shotguns channel the classic designs, and we even have a new side-by-side in the mix. That said, the detachable-magazine semi-autos—one of which is a marvel—will be sure to cause them fits. 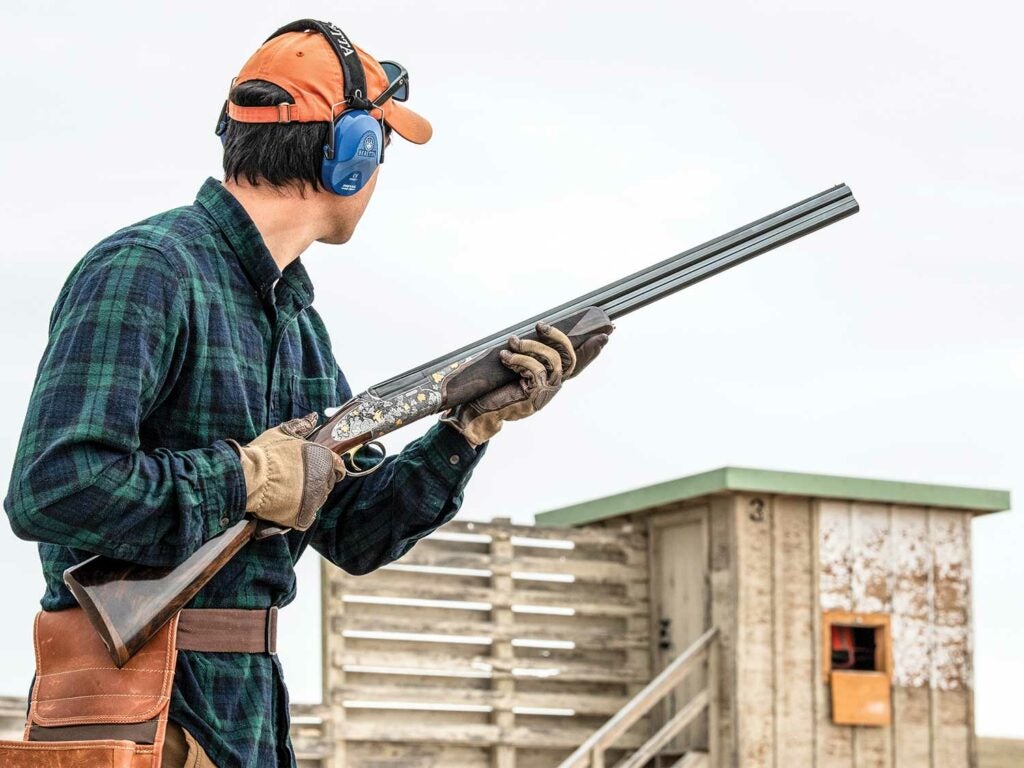 Caesar Guerini has pulled off something remarkable with the Revenant. It has created a production shotgun that, except for the final engraving, is never touched by hand, yet exhibits the fit, finish, and handling qualities of an English Best smoothbore—for a fraction of the price. Yes, 13 grand is real money, but when compared to the cost of a bespoke gun, which can easily top six figures, it is a good value and an incredible accomplishment.

What that buys is perfection: gorgeous wood, flawless wrap-around checkering, exquisite wood-to-metal fit, a level of engraving that no other gun at this price point even comes close to achieving, and a shotgun that shoots beautifully.

The deeply cut and detailed engraving is a three-step process that begins with an automated laser that does most of the cutting, followed by approximately 10 hours of handwork, and then the final application of gold inlay, also done by hand. The Revenant is built along the lines of a classic British game gun, with solid side ribs, 28-inch barrels, a trim fore-end, and a Woodward-style grip. The entire team praised the gun’s balance and nimble handling. It swung easily on every target we presented, solidifying our opinion that it would be ideal for any type of upland game.

That last point is perhaps the most important. Yes, the Revenant is lovely to look at, but at its core, it was born to hunt. Little surprise that it ran away with an Editor’s Choice award.

We liked the original 828U shotgun quite a bit when it was introduced, but this target model is the best expression of the innovative over/under yet. The gun can be tuned and balanced with weights that go in the buttstock, and adjusted for trigger reach and stock position. It comes to the shoulder perfectly and gives a great sight picture down the wide rib.

The triggers have no creep or grit and break just below 3 1⁄2 pounds. At nearly 8 pounds, the Sport won’t beat you up after a 100-target round, and given how well it shot for us, you’ll be tempted to put another 100 through it before heading home.

This new Citori 725 is tricked out with all the little gizmos that trap shooters crave. The rib can adjust the impact pattern from 50/50 to 90/10, the butt pad and cheekpiece move every which way for a custom fit, and the close-radius grip has a palm swell for extra contact and control. The 30-inch barrels are ported, it has two beads, and it comes with five extended choke tubes.

We all had a blast busting going-away targets at long, long ranges—which is this shotgun’s one and only task. We thought it looked pretty good too, which is nice when you’re spending this kind of cash.

The Bobwhite is back. We couldn’t resist adding this little side-by-side to the test lineup this year, if for no other reason than to remind folks that some shotguns still come with their barrels aligned horizontally. It has dual triggers (that both require a good yank to set off), 28-inch barrels, and extractors, but no ejectors. This is a bare-bones and attainable side-by-side that balances and swings really nicely, and hearkens back to a simpler time and a simpler—and more elemental—style of hunting. For anyone who’s a bit SxS-curious, the Bobwhite is a good introduction to old-school wingshooting.

The V3 is a smaller (3-inch), and in many ways improved, version of the 3 1⁄2-inch Remington Versa Max action, and it is good to see the platform get an upgrade for hardcore waterfowling. The smaller action is lighter and imparts a lively feel to the gun, which is something we certainly noticed in how the Waterfowl Pro mounted and swung. It has the oversize controls that are helpful for operating a shotgun with numb fingers, and it comes camoed and Cerakoted. The beveled receiver makes loading easy. We weren’t swept away by its looks, but its workmanlike lines would fit perfectly in a goose pit or duck blind. 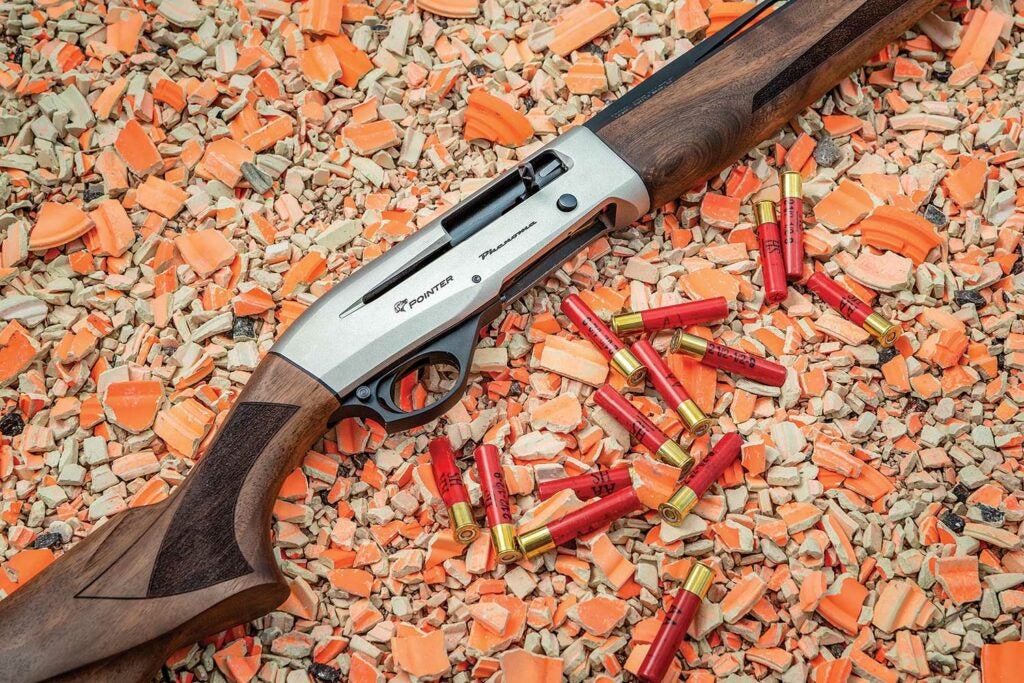 The danger for any .410 is that it might be dismissed as a curiosity—a cute little smoothbore that is fun to shoot but doesn’t have the chops for real shotgunning tasks. Often this is the result of an ill-balanced design that makes the gun too whippy, therefore diminishing control, or, in the case of a semi-auto, one that has difficulty with reliable cycling and feeding.

However, neither of these is an issue with the Phenoma, a Turkish-made gun under Legacy Sport’s Pointer brand.

The shotgun earned respect from our team of judges with the first shells we put downrange. The Phenoma had no problem holding its own on the most challenging targets we could throw at (or away from) it. And with each clay it smashed into tiny bits, we were increasingly impressed with how the gun handled and shot.

For the price you won’t find a better subgauge shotgun. And if you have a mind to reload, you can save piles of cash shooting this .410 with your own ammo.

The only real critique we had was the heavy 7.5-pound trigger pull, but even that didn’t seem to hold the Phenoma back.

Recoil was barely noticeable, making this a great gun for everyone, especially youngsters and shooters new to the sport.

I lost count of how many rounds we put through the shotgun—many hundreds—and never once did it fail to cycle.

In light of all this, it was the unanimous choice for this year’s Great Buy in the shotgun category.

This new inertia-driven shotgun from Weatherby is attempting to elbow its way into a competitive market for imported semi-autos. The Deluxe version we tested was stocked with nice walnut, had an attractive laser-cut engraving pattern on the receiver, has cool-looking vents under the top rib, and is chambered for 3-inch shells. The team praised the way it pointed and shot too.

It is a great example of a quality Italian-made shotgun, but in our opinion it doesn’t have the same level of refinement found in its competition from the boot that sells for about the same price.

The original 12-gauge version of the SX4 charmed the hell out of us, so we were eager to meet its just-introduced, scaled-down 20-gauge sibling. It has the same type of large bolt release, which is a bit inelegant to the eye but quite comfortable and ergonomic in hand. It’s a versatile gun that can be used on ducks, clays, or grouse. At just over 61⁄2 pounds, it is suited for sunup to sundown upland hunting.

It got on clay targets quickly and has enough mass up front to smooth out the swing, but we wished the trigger pull was a couple of pounds lighter.

Read Next: The 18 Best New Hunting and Precision Rifles, Tested

Competitors in 3-Gun and other action sports have longed for a shotgun that runs high-capacity magazines, can be reloaded quickly, and, most important, is reliable. For many of us, that quest has felt as fruitful as a unicorn hunt. But with the arrival of the VR80 from Rock Island Armory Imports, that elusive goal seems to have been achieved.

Where other shotguns have stumbled—I’m thinking specifically of the Saiga, which is built on an AK-47-type platform and is notoriously finicky to keep running—the VR80 appears to have succeeded.

Our base-model shotgun came with a 5-round magazine, but we made sure to get our hands on some of the 9- and 19-rounders too.

Stuffed with 2¾-inch target loads, the VR80 churned through one mag after another without any feeding issues. We used it on clays and steel, and were surprised at how well we could bust flying targets using its pop-up AR-15-style aperture sights. With a red-dot mounted on top, it would be hell on wheels. Maintaining a good sight picture on steel was fairly easy too, even during rapid mag dumps.

The mags are a bit tricky to load, but the only real issue here was with heat. The hand guard is slender, which we liked, but if you squeezed tight, your skin could touch the gas piston, which is an experience you won’t soon forget.

That’s a small price to pay, however, for an outstanding—and affordable—competition shotgun.

This gas-piston shotgun is an AK-pattern semi-auto, like the Saiga. And as with most Saigas, we found it to be a bit tricky to keep running on a consistent basis.

Ergonomically, it mimics the AK’s controls—the bolt, safety, iron sights, mag release, and takedown procedures are the same. When it did shoot, it did its job well, but overall we couldn’t generate much enthusiasm for the RSS1.

As our team of judges has done for many years now, we gathered in Bozeman, Montana, home of shooting editor John B. Snow, to conduct the test. After settling into our base camp and stocking up on beers from Bozeman’s 13 breweries, we got down to business.

The testing falls into three distinct phases. First, we gather all of the new rifles and shotguns and inspect them, collecting the empirical data concerning trigger pull, firearm weight, barrel and stock dimensions, and any new innovations to note in their design and function. We also make sure all of the fasteners have been tightened correctly—which is a step anyone taking possession of a new gun should do. You would be amazed—or perhaps more rightly distressed—to learn how often we find loose screws.

In phase two, the fun begins. We shoot the rifles for accuracy, using multiple bullet styles and weights. To determine a rifle’s accuracy, we take the average of the best ten 5-shot groups.

We also run the rifles through a series of drills to replicate how they’ll perform in the field. We hammer through full magazines as fast as we can, toss single rounds into the receiver to see if they’ll feed, and shoot from different positions to assess ergonomics and handling.

We do the same for the shotguns. We shoot clay targets coming, going, and crossing—in singles, pairs, and even triples. We start with guns held low, pre-mounted, and even with guns empty.

During the last phase, we go over the guns with a detective’s eye, analyzing fit and finish, workmanship, and other details of how they were manufactured. At the end of the week, we score each firearm individually, plug the data into a spreadsheet, and figure out the overall winners and order of finish.