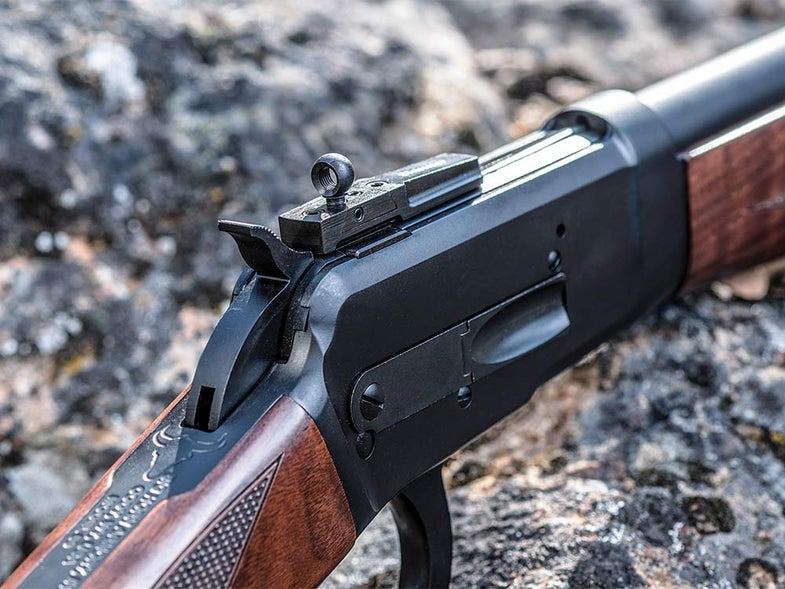 The rear sight has a large aperture for fast target acquisition. It excels at close ranges (inside 75 yards) and in low-light conditions. It mounts on top of the M89’s bolt. Bill Buckley
SHARE

If you want to experience a bit of ballistic magic, take any large handgun cartridges—the magnums in particular—and run them through a carbine-length rifle barrel. As impressive as they might be in a revolver or large-framed semi-auto, these bullets shift into beast mode with a longer barrel to charge down.

That’s what makes the Model 89 lever-action from Big Horn Armory an effective thumper for thick cover and close quarters. Chambered in 500 S&W, which is hardly a slouch in Smith & Wesson’s X-Frames, the M89 elevates the capability of what is already our most potent handgun cartridge.

The M89 I tested, also called the Spikedriver, has an 18-inch barrel and, compared to the 10 1⁄2-inch tube on my Smith & Wesson Performance Center revolver, jacks up the muzzle velocities of the lipstick-size 500 cartridges by 400 fps or more, according to my chronograph. The M89 is offered with 16- and 22-inch barrels as well.

That extra velocity translates into 1,150 to 1,300 foot-pounds more kinetic energy at the muzzle, putting the cartridge on par with the .45-70 Govt—in other words, making it capable of taking down any critter that walks the land, short of thick-skinned dangerous game.

Born in the USA

The Model 89 itself is made with the craftsmanship and attention to detail that used to be par for the course for American gunmakers. Big Horn Armory is based out of Cody, Wyoming, the most gun-friendly town in the U.S., so it makes sense that the workers there know how build a lovely rifle.

The M89 is a sturdy piece of work. By necessity, the barrel and tubular magazine have a thick profile to accommodate the .50-caliber projectiles. The stock is generously proportioned too, both to visually balance the rifle and to make it more comfortable to shoot. The buttstock has a substantial recoil pad, and the wood on the fore-end has a smooth taper at both ends but swells in the middle, offering a lot of surface area for the shooter to grip.

The wood itself is a high grade of walnut with a lot of figure that glows with the warmth that only a quality blank that’s been properly oiled and finished can achieve. The checkering on the stock is in a straightforward diamond pattern, with a fine line border, and is among the best examples of laser-cut checkering I’ve ever seen. The fit of the wood to the metal is also superb. The inletting along the barrel betrays no gap, and the wood is slightly proud—meaning raised above the level of the metal—where it meets the receiver and the fore-end cap, just as it should be. 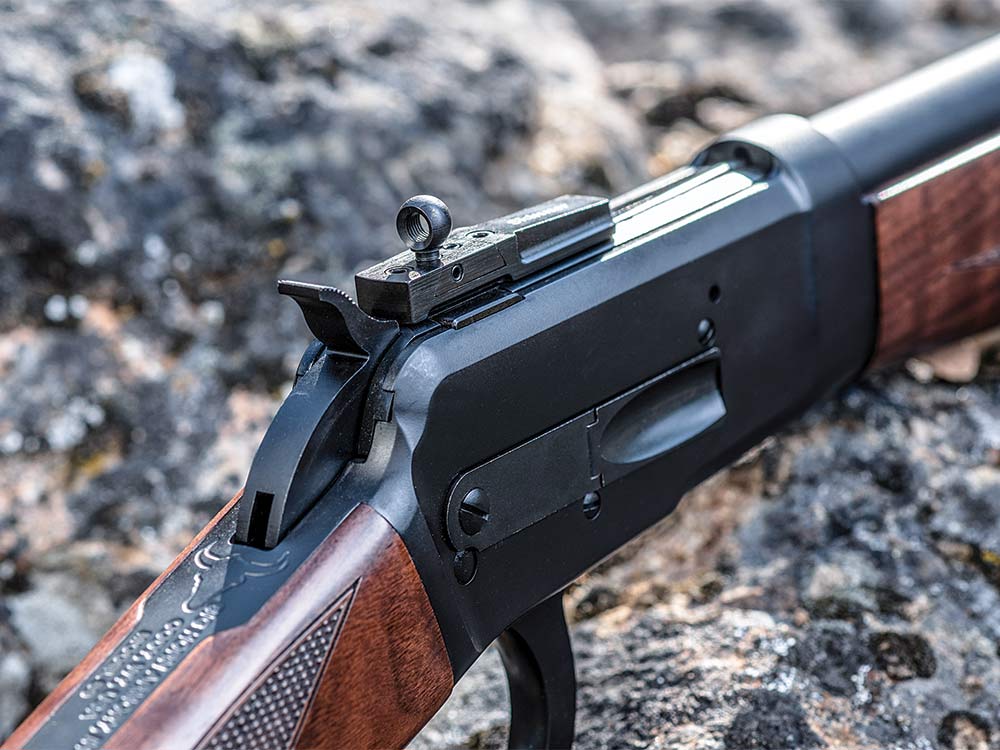 The rear sight has a large aperture for fast target acquisition. It excels at close ranges (inside 75 yards) and in low-light conditions. It mounts on top of the M89’s bolt.

This adds up to a rifle that is just under 8 pounds and is easy to shoot and control with even the heaviest 500 S&W loads.

One highlight on the rifle is the peep sight system by Skinner—another example of functional simplicity. The rear sight has a large aperture, is mounted on top of the bolt, and can be adjusted for windage and elevation by loosening two Allen head set screws. The front sight is tipped with a large white bead that sits on top of a narrow vertical blade that has small horizontal striations to reduce glare.

At closer ranges—50 yards and under—the sights are fast and deadly, and the rifle prints cloverleaf groups when shot off sandbags. At 100 yards, I expected the groups to open up to pie-plate size but was surprised to see good accuracy there as well, despite the amount of float one gets while trying to center a bead in a large rear aperture.

Federal’s 325-grain Swift A-Frames shot 1.41-inch groups, the best of the test, while Hornady’s 500-grain load averaged 2.014 inches, followed by 3.905-inch groups from the Hornady 300-grain FTX load. Worked offhand, the rifle had no trouble at all ringing a 12-inch gong at 100 yards, though the 500-grain bullet required a higher hold than the other loads. 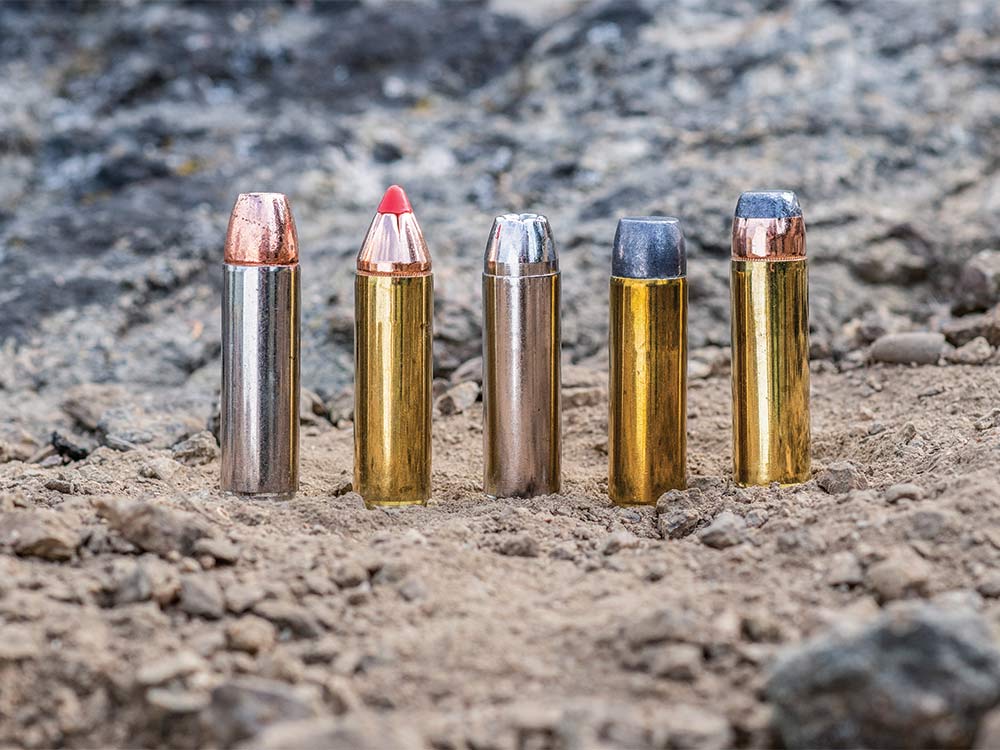 The 500 Smith & Wesson comes in a wide range of bullet weights and styles, from 275 to 500 grains (left to right), giving the cartridge tremendous versatility.

The only fault I found with the rifle is that the action didn’t run as smoothly as I would expect. The action would bind slightly at times, requiring an extra jiggle or two on the lever to get the bullet chambered. The M89 had the most trouble with the pointed 300-grain FTX bullets in this regard. The more-rounded bullets on the heavier loads required less finessing.

I’ve seen other M89s run without these issues, so I’m inclined to think this was isolated to my sample. And while I would happily hunt deer or elk with the rifle I evaluated, I wouldn’t use it on game that might bite, gore, or stomp me in return unless the action got slicked up.

Minus that kink, the rifle is really impressive. Not only is Big Horn Armory keeping alive one of the greatest traditions in American gunmaking—the building of fine lever-actions—but it is also helping the 500 S&W, which would otherwise remain a niche cartridge talked about more than shot, realize its full potential as a big-game round.