The Best New Shotguns of 2018, Tested 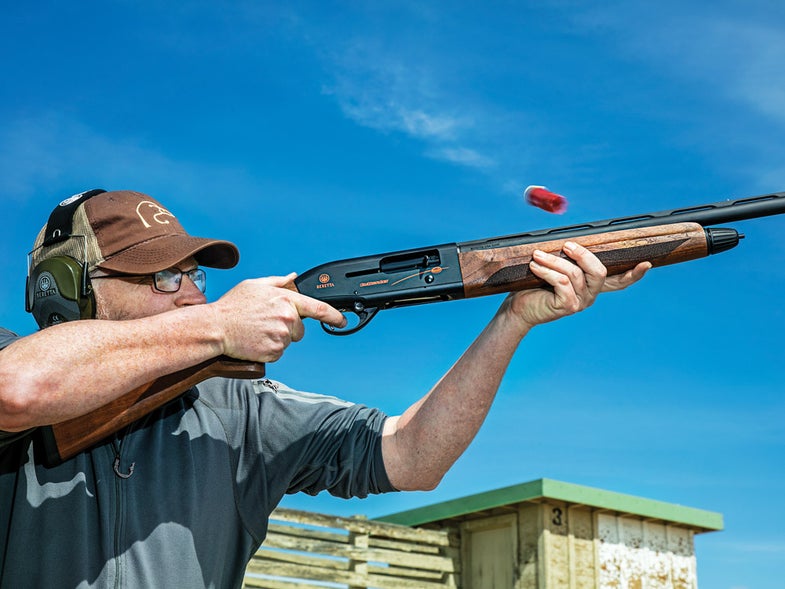 This year, rifle and shotgun makers delivered an impressive field of new guns. The interest in precision rifles capable of fine, long-range accuracy continues. Some are meant for competition and general range shooting, others for hunting. As a group, these rifles are getting better, and as a result, we had the most accurate field of firearms we’ve ever tested at Outdoor Life. Five-shot accuracy averaging .75 inch or better is now the new standard of excellency for good factory rifles shooting factory ammo. Note I said “averaging,” which is quite different from a random tight group or two.

Curiously, the budget-oriented rifles this year come from Europe. One is a Mauser made in Germany and the other is the Franchi Momentum, which is the Italian company’s first bolt-action.

The field of new shotguns, as usual, is small but strong. We have attractive over/unders for birds and clays, and a semi-auto from Beretta that’s a heck of a value. The big news, though, is the arrival of box-magazine-fed pump guns. It is an interesting development that has some benefits, but it is too early to say whether they will supplant our traditional pumps. 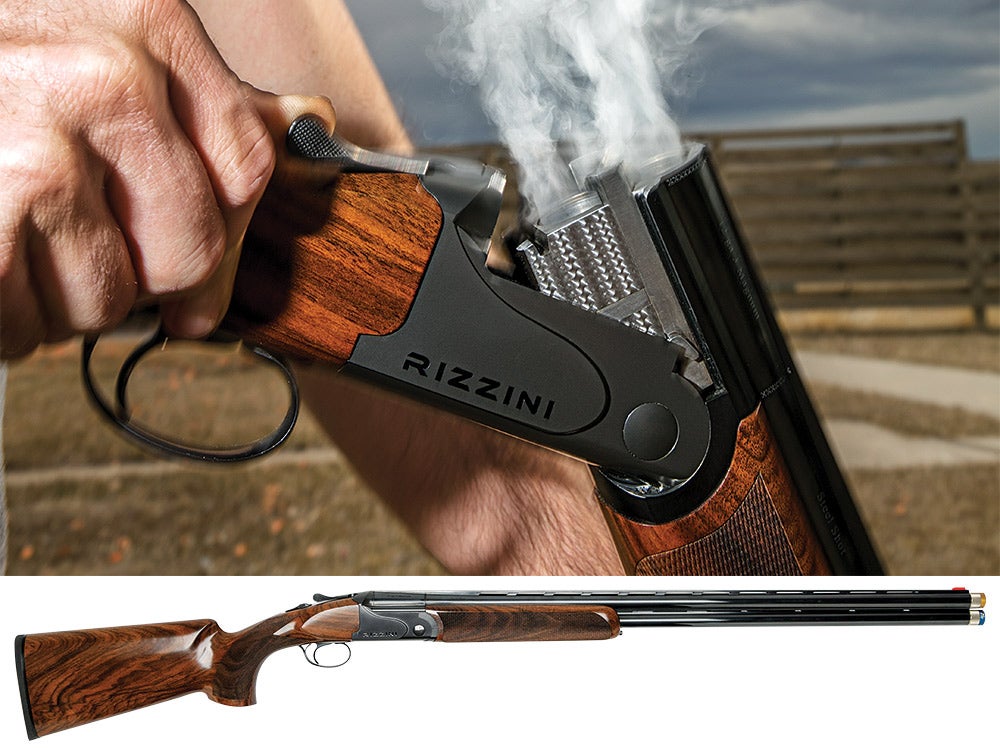 The test team took an immediate liking to the BR110 Sporter by Rizzini. With some competition guns, you end up wondering what exactly justifies their price tags. Not in this instance.

This newest addition to the BR110 line is an excellent all-around sporting-clays gun. Everything about it feels right. The gun’s 8-pound weight and 30-inch barrels are both ideal for sporting clays. And no matter what kind of target you’re presented with, this gun “just seems to find the bird,” as one tester put it.

The stock fit all of us well. And even when we were taking fast pairs, we didn’t have any problems getting the gun moving.

It is also beautifully built. The deep, even bluing on the barrels makes the elegant raised rib look even better. The wood has a gorgeous figure to it, and the checkering is nearly flawless. The coating on the receiver has a grayish hue that contrasts pleasantly with the rest of the gun. The triggers are light and crisp, tripping at just over 3 pounds each.

In a strong field of contenders, this shotgun earned the highest grades and the Editor’s Choice award.

Beretta’s A300 is one of the best series of semi-autos out there when it comes to reliable performance for the price. The gas-operated action has earned a reputation for durability, and we reaffirmed that during our test as we tried to push the new Outlander Sporting to its limits. During one particularly warm string of shooting, we ran 125 rounds though the gun as fast as we could keep it loaded, and other than getting as hot as a branding iron, the gun took it in stride.

There’s nothing very flashy about this new shotgun. Aesthetically, it is fairly subdued, with an evenly executed matte finish on the metalwork and a red-clays-themed design on the receiver. The wood is a middle-of-the-road grade, and the checkering serviceable but with some flattened diamonds in the pattern.

In terms of performance, the shotgun is on point. The gun swings smoothly thanks to its 30-inch barrel, and it’s blessed with a well-designed stock. The fore-end is trim, and the heft of the gun is situated nicely between the hands. The shotgun is also a natural pointer. It isn’t as snappy as a light upland gun, but we found it could get on speeding targets in a hurry, even when we started from a low-gun position.

In addition to its core mission as a clay-target gun, we think this would do a good job on birds as well.

This versatility, particularly in light of its price and no-nonsense reliability, made the A300 Outlander Sporting the top shotgun in the value category, earning it our Great Buy award for 2018.

This new White Lightning has a noticeably slimmer fore-end than earlier iterations of the Browning Citori, and everyone on the test team agreed that it improved the shotgun’s handling. The triggers on the gun were excellent as well, tripping at a crisp 4 pounds, 1 ounce and 4 pounds, 7 ounces. The rib on the 28-inch barrel has two simple ivory beads and comes with understated Extended choke tubes. The scrollwork engraving on the receiver covers the sides and bottom and is attractively understated. As a crossover gun for clays and birds, the White Lightning is sure to generate some new Citori fans.

In terms of aesthetics, the Elos D2 won our hearts. This gorgeous upland gun has eye-catching wood, tasteful matte bluing on the barrels, and a well-sculpted receiver with contrasting finishes and textures that complement each other. It didn’t disappoint us while we were shooting either. We found the Elos to be very well-balanced and quick to get on target. It is a shotgun that any bird hunter could hike with all day long, whether they’re going for quail or larger game, like pheasant. Our test model had an intermittent issue ejecting shells, which cost it some points in the reliability category, but it is a gun any of us would take hunting.

I doubt this handy little o/u will rescue the 16-gauge from its place in purgatory, but it certainly might convince a few more bird hunters to give it a try. For the price, this shotgun is a good value, and at less than 5.5 pounds, it is super easy to carry around. But light weight comes at the cost of recoil, and we found the Franchi a bit jumpy and difficult to tame. The gun shot best when quickly brought into action without much forethought. It is a plain-­looking gun, with basic blued barrels that contrast with the matte finish of the aluminum receiver. The mechanical triggers are crisp, and like many field guns, it has an automatic safety.

The biggest news in shotguns this year is the arrival of pump-actions from Remington and Mossberg that are fed by detachable magazines. The systems certainly herald a significant change for this style of shotgun and have generated a lot of interest among the tactical and personal-protection crowds.

Quickly reloading a shotgun with a tubular magazine is a difficult skill to master, so the promise of magazine-fed shotguns that operate reliably has been on many shooters’ wish lists. Because these shotguns aren’t meant for wingshooting, we didn’t include them with the rest of the field.

For hunters, a box magazine has some definite advantages. It allows for easy control over ammo, which is extra helpful when taking young or less-experienced hunters afield. It makes verifying that a shotgun is unloaded a simpler task. It offers a speedy way to show that a shotgun cannot hold more shells than allowed by regulations. And it gives hunters a quick way to swap shells, should conditions call for a different type of ammo. For personal protection, it offers similar benefits, plus it gives you the added bonus of being easy to reload in a hurry.

The Remington 870 DM Predator ($799) we tested is configured for turkeys, deer, hogs, and predators. It comes with both 3- and 6-round magazines and takes Extended choke tubes, which have helpful names like “Boar Blaster” printed on their sides. The 870 has a simple peep sight but also comes with a Picatinny rail for mounting optics.

The magazines were easy to load and swap out. Otherwise, it operates like a traditional 870, though our sample’s action was a bit on the rough side.

The Mossberg 590M ($801) we tested came with a heat shield over the barrel and a bunch of extra mags. We heated this gun up pretty quickly, busting clays with it on the skeet field and having a grand ol’ time. As with the Remington, loading and changing the magazines was a quick affair, and given that the Mossberg’s mags come in 5-, 10-, 15-, and 20-round sizes, it is more clearly geared toward tacticool and personal-protection shooters.

Before you ditch your trusty tube-fed pump gun for one of these, it is worth noting that when we accidentally dropped a magazine on the ground, it ejected all its shells, leaving us with an empty hunk of polymer. Point being, there’s still a lot to learn about these interesting new shotguns before betting your life on one. 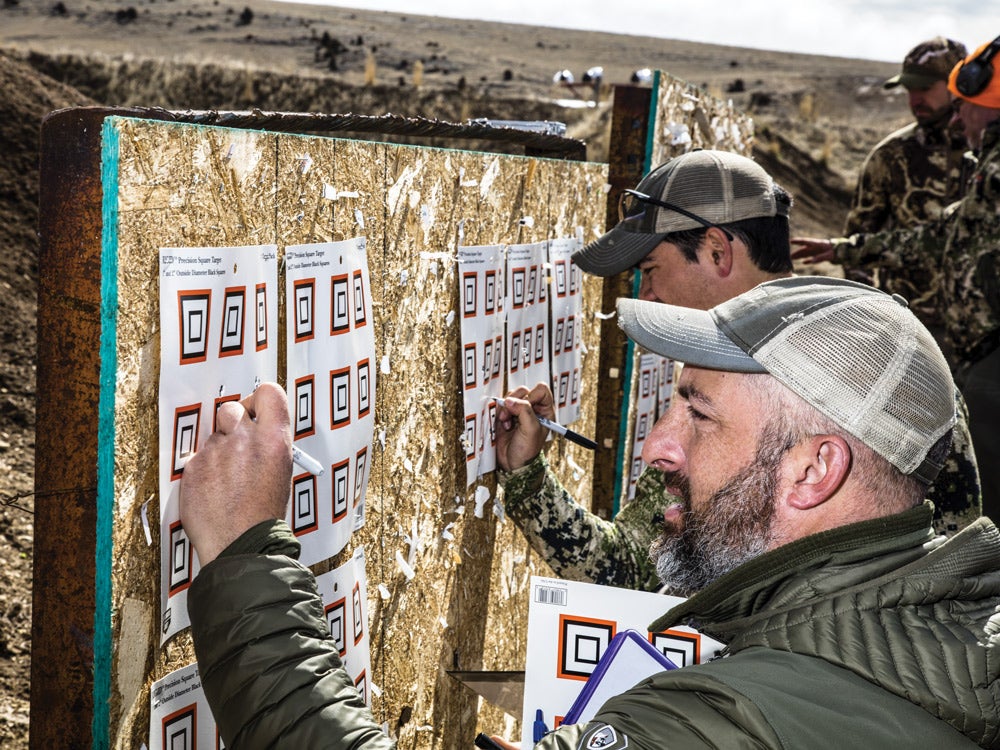 Our interest in these rifles and shotguns boils down to a question of practicality. How useful do we deem a firearm to be in light of its intended purpose and its potential applicability for other uses?

Our test is structured to get to that answer. With the rifles, we spend most of the first couple of days of our weeklong evaluation shooting them off the bench. This helps us gather baseline data on accuracy and allows us to make note of any significant issues with basic functions, like loading, feeding, action smoothness, extraction, ejection, and trigger pull. Our standard of multiple 5-shot groups in succession stresses the rifles and reveals which rifles can, literally, take the heat. Our accuracy scores are based on the average of the 10 best 5-shot groups measured, which is a fair representation of what a gun is capable of doing.

While critical, this is only a small portion of the equation that goes into the grades you see presented in the charts.

Once away from the bench, we put the rifles through a series of drills to see how they’ll handle real-world hunting and shooting conditions. We ring a lot of steel at our home range in Bozeman, Mont., as we shoot the rifles offhand, kneeling, sitting, and prone, either unsupported or with field-­expedient rests. We also try to induce malfunctions by awkwardly cycling the actions, attempting to load more rounds than the magazines are designed to hold, tossing single rounds into the chamber at different angles to see if they feed, and performing other nefarious drills.

With the shotguns, we spend nearly all of our time shooting clays—though our goal isn’t to run 25 straight on the skeet field. Instead, we handle the shotguns in various ways to test their balance, pointing characteristics, and ergonomics. We’ll shoot some clays with a high gun, but mostly we’re shooting from a low-ready position, with the clays coming at random intervals to more accurately represent the flight of wild birds.

Finally, we put a premium on both the versatility of these firearms and their value. We favor guns that can do more than one task, and we’re especially fond of guns that yield a lot of performance for the price.

Our top overall-scoring shotgun and rifle get the Editor’s Choice award, while the best value is deemed our Great Buy.