This Giant Nontypical Buck Might Be Louisiana’s New State Record

This city-limits whitetail should top 200 inches 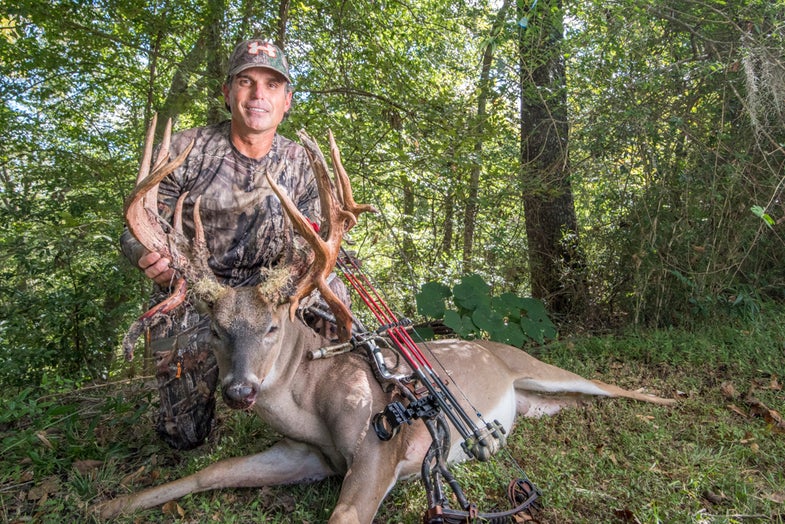 “I killed the deer inside the city limits—behind my dentist office,” Dr. Frank Sullivan said of the 18-pointer that grosses between 220 and 230 inches.

The current top Louisiana nontypical archery record is held by a 227 6/8-inch velvet buck. The No. 1 nontypical bow buck (without velvet) measures 206 5/8 inches, via Pope & Young.

Sullivan first saw the buck during the 2016-17 season. The deer survived an arrow from another hunter and an encounter with a car before disappearing last fall. It reappeared six weeks ago on Sullivan’s 24-acre plot of land, and it had added lots of mass, a third main beam, and two large drop tines. Sullivan said he found photos on his trail camera the morning of Oct. 5, and planned a hunt for that afternoon after seeing patients. He thought he ruined the hunt by bumping some deer while walking to his stand at 4 p.m., but soon some small bucks appeared, feeding near him.

The huge 18-point stepped out at 25 yards a short time later, and Sullivan was about to loose an arrow when the animal spooked. Sullivan let off his bow and watched the buck through some trees, but he got another chance when the deer walked back into the opening.

The hunter made that second chance count, and the buck ran just 25 yards before crashing. Sullivan, his wife, and some friends returned shortly after dark and recovered the massive animal.