JOC helped the rifle gain popularity among the masses 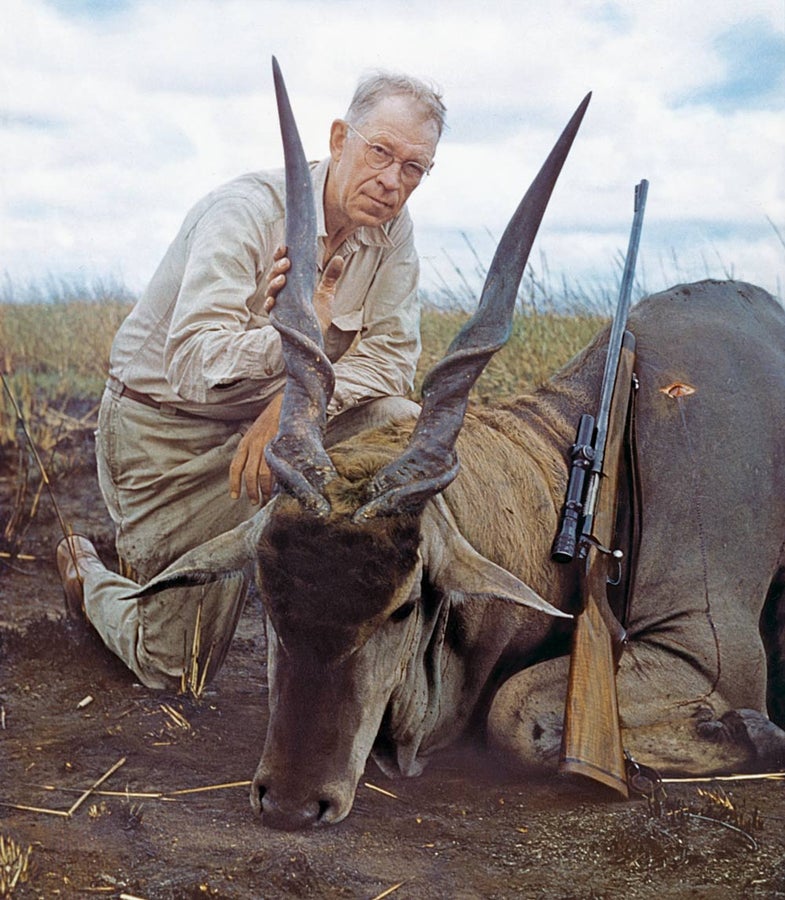 Jack O'Connor beside a record-book eland taken with his model 70 in .375 Magnum. Jack O'Connor
SHARE

Since its introduction in 1936, the Winchester Model 70 featured heavily in Jack O’Connor’s columns. O’Connor reflected on the origins of his relationship with it, writing in 1964: “My experience with the Model 70 actually goes back to the fall of 1925 when I bought my first Winchester Model 54 in .270 caliber. The Model 54 was really sort of a primitive Model 70, or the Model 70 is a refined Model 54.” Here’s a look at his writings on a rifle that found its way into his heart—and on his hunts—many times over.

January 1940: Getting the Range

The stock on the Model 70 Winchester—successor to the old Model 54—has good fore-ends, satisfactory drop at comb and butt, and a good, wide, flat butt plate. It’s not perfect, in my opinion, but any man of average proportion ought to be able to do good shooting with it.

A great many guns of every sort are being turned out in this country, but the day still isn’t here when a man with a fancy for a particular sort of weapon can simply walk into a sporting-goods store, lay down the right number of dollars, and go out with exactly what he wants. [One] reason is that many sporting-goods stores have waiting lists for popular items. One not particularly large joint with which I am familiar has a waiting list for about 100 Winchester Model 70s in .270. These arms never appear on the shelves at all. A bad bottleneck which has developed in the production of better-grade guns is the shortage of men able to checker gun stocks. During the war there was no demand for practitioners of this high art. Many went into other lines of work. Some moved away. Some died. None were trained. Now they’re scarce.

Rumors have been sky-hootin’ through the gun trade that Winchester was about to bring out a featherweight version of the famous Model 70 rifle. No flies on the Model 70! She’s all rifle, a yard wide, and built like the brick edifice in Mrs. Kelly’s backyard. For mountain hunting she’s a bit on the heavy side, though, and with certain scopes and mounts she’s likely to weigh 10 or 10½ pounds.

Now, chaps with varicose veins and fallen arches find lugging standard Model 70s over hill and dale a bit burdensome. So these rumors of a light musket interested me vastly, not only because my own legs have been worn off halfway to the knees by lugging heavy rifles over sheep mountains, but because many of the letters I’ve had plead for a rifle light enough to be transported by elderly characters without the aid of a dog team.

Never let it be said that Winchester can’t keep a secret. Once at the factory a hired hand drew me aside and was about to spill the dope. He glanced furtively about, his eyes rolling in fear. Then he drew my ear close to his lips and began to whisper, “Now this is absolutely confidential, but I’ll tell you what we plan to do.”

Just then a secret porthole in the wall slid open. There was a flash and a hiss through the air, and a silver-mounted Malay dagger buried itself in the wall within an inch of my pal’s head. He fainted dead away, and when he finally revived I did not press him further.

With my well-known feminine intuition, I had it doped out that the Winchester featherweight, if and when it materialized, would be in the .270 and .30/06, the best selling calibers in the good Model 70. That seemed only logical, but alas, the world does not always operate on a logical basis.

The featherweight has now arrived—and with it a mysterious new cartridge, the .308 W.C.F. It’s this cartridge, for which the rifle’s chambered, that’s the real surprise.

As of right now, I have nine Model 70s, from .375 Magnum to .220 Swift. All have been slicked up, their trigger pulls adjusted, and they have been cunningly restocked in French Walnut. My oldest is the .257. Its serial number is 796, which means that it dates from 1936.

January 1966: Getting the Range

The de luxe [sic] Winchester Model 70 retails for $274.95. Ebony grip cap and fore-end tip are set off with white spacers. The fore-end tip is put on with the now-fashionable slant. The checkering pattern is ornate but hand done. The wood is American black walnut burl.

Winchester has probably run the wants of rifle purchasers through a Univac and has come up with exactly the answer as to what the lads with $274.95 to spend dream about. The new stock is not exactly my cup of tea, but that is neither here nor there. I am a mean, opinionated old mossback, and if they made stocks to please me they’d go broke.

Read Next: 20 of Jack O’Connor’s Greatest Quotes on Sheep Hunting

I was sitting there, hot, thirsty, and bored. My Winchester Model 70 .375 Magnum was lying beside me. There was a cartridge in the chamber but the safety was on…

Exposed as we were and as wary and keen-sighted as a tiger is, I knew I’d have to be cautious. I would lay my hand on my .375, I decided, and then, when the tiger had passed to my left and I was out of his range of vision, I would pick up Old Death and Destruction and slap a 270-grain bullet through his ribs in line with his shoulder.

I have a very nice .375 Magnum, a pre-1964 Winchester Model 70 that has been remodeled and restocked in fine Iranian walnut. I have used the rifle on several trips in Africa, India, and Alaska. With it I have shot lions, tigers, bears, Cape buffalo, kudu, sable, and whatnot. The bore is perfect. The blueing is spotless. The stock has a few small scratches and a couple of small dents. I could take them out in a half-hour’s work with fine wet or dry sandpaper and one application of linseed oil.