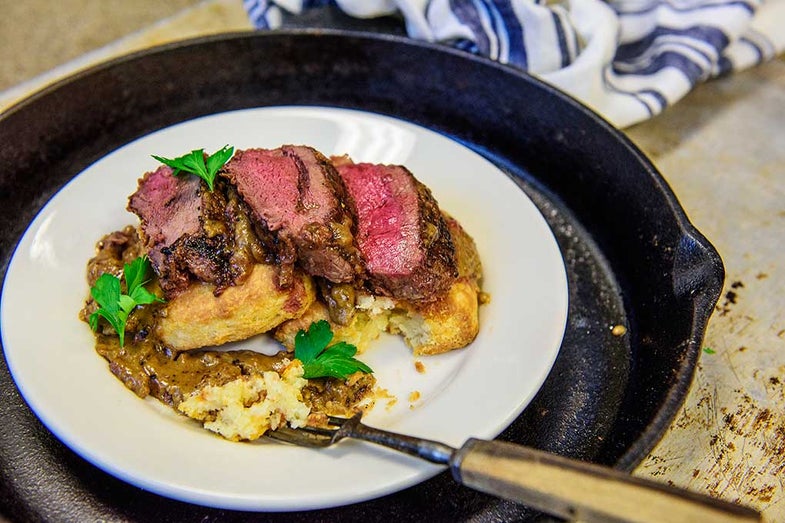 People of the Boomer Generation can sometimes be overhead making assumptions about Millennials. You know, the ramen-eating, Snap-Chatting, sleep-‘til-noon crowd that has no idea how to hunt hard. But we all know about what they say when one assumes, right? Something about making a donkey out of you and me?

Joey Bernard is a Millennial, and my recipe today is inspired by his favorite deer-camp dish. Joe is one of those bright, promising young adults that represent the best of his generation. I met him when he was 4 years old. He was one of those precocious fellows you couldn’t help but like. Though his eyes were full of good ol’ American farm-boy mischief, his freckled face always beamed with a toothy white smile diffusing any notion that he was anything but angelic, albeit all boy.

From the time Joe was 2 or 3, he would run out the farmhouse screen door with a toy pistol, a baseball bat “rifle,” a rubber-suction-tipped bow and arrow, or a stick he had dragged into the house from the day before. He would pretend to shoot ants, birds, squirrels, the horses in the corral, and he scoped the cows in the pasture with his two small hands raised to eyes like binoculars. Eventually he outgrew the toy weapons, but not his quenchless love of hunting and baseball. With the loving influence of his family, Joe has grown to be an All-American young man. He was a bull rider in the High School Rodeo Association (HSRA), won a scholarship to play collegiate baseball, currently studies business and marketing, and has grown into a good bowhunter with a reverence for God, Country, and the great outdoors. When he isn’t working as a hunting retail specialist at his local sporting goods store, he cooks.

In his own words:

“My name is Joseph Bernard and I am 19 years old, I am an avid hunter and outdoorsman. I have hunted ever since I can remember. My passion is bowhunting, but I hunt just about anything there is a season for. Whether I am hunting around home, or I am at deer camp there is one recipe that seems to always be a camp favorite. It is a favorite because it is a sort of rustic-type recipe and it is very easy to make with very few ingredients. I have eaten this fantastic meal at deer camp, I have also made it in my college dorm room in less than a half hour. Venison back strap and homemade biscuits is the meal. This will bring some back to their golden days when they were just a greenhorn at hunting camp. I have had venison this way ever since I can remember at deer camp or anywhere for that matter. “

Butter or oil for skillet

Roll steak in flour and salt and pepper Add butter, or oil to cast iron skillet. Cook over medium-high heat until crispy (don’t flip flop). Add a little more butter or oil and add in some flour and brown. Add water, stir, and simmer until the gravy reaches the desired consistency. Add salt and pepper to taste, and some pepper flakes for some heat if you like.

Preheat oven to 425 degrees. Mix flour, salt, sugar, and baking powder together. Add butter and squeeze of cut into the dry mixture until pea sized. Pour in buttermilk ½ cup at a time until you have achieved a good consistency. Flour your work surface and shape dough into a square about 1/2 ‘ thick. Cut into 9 even squares. Transfer to sheet pan or cast iron skillet, pop in the oven, and bake until golden (about 15 minutes).